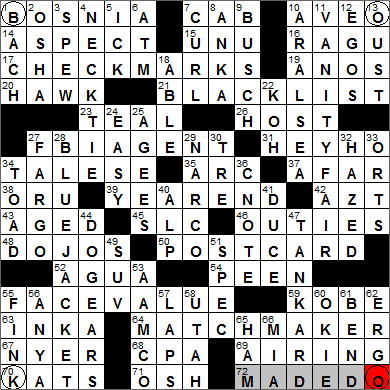 CROSSWORD SETTER: John Farmer
THEME: A Book to Start and Finish … there is a note with today’s puzzle:

Today’s Wiki-est, Amazonian Googlies
Across
1. Balkan land : BOSNIA
Bosnia and Herzegovina was one of six federal units in former Yugoslavia that gained independence after the Yugoslav wars of the 1990s. There are three main ethnic groups in Bosnia. The largest group are the Bosniaks, the second the Bosnian Serbs, and the third the Bosnian Croats.

10. Former Chevy subcompact : AVEO
The Chevrolet Aveo is a subcompact that has been around since 2002. The Aveo is manufactured by GM Daewoo, the GM subsidiary in South Korea. Although the Aveo name is still used in some markets, here in North America the Aveo has been sold as the Chevrolet Sonic since 2012. By the way, GM Daewoo is the third largest manufacturer of automobiles in South Korea, after Hyundai and Kia.

16. Classico rival : RAGU
The Ragu brand of pasta sauce is owned by Unilever. The name ” Ragù” is the Italian word for a sauce used to dress pasta, however the spelling is off a little. In Italian the word is “Ragù” with a grave accent over the “u”, but if you look at a jar of the Unilever sauce, it is spelled “Ragú” on the label, with an acute accent. Sometimes I think we just don’t try …

19. Calendario spans : ANOS
In Spanish, we start years (anos) in January (enero) as noted on a calendar (calendrio).

23. Greenish shade : TEAL
The beautiful color of teal takes it name from the duck called a “teal”, which has dark greenish-blue (teal) markings on its head and wings.

27. “Public Enemies” officer : FBI AGENT
“Public Enemies” is a 2009 crime drama tells the story of bank robber John Dillinger and his pursuit by the FBI. Star of the movie is Johnny Depp, who plays Dillinger.

31. Repeated cry in the Ramones’ “Blitzkrieg Bop” : HEY! HO!
“Blitzkrieg Bop” is a song by the punk rock band Ramones. The song opens with “Hey! Ho! Let’s go!”, a chant that is now used as a rallying cry at sporting events.

38. Tulsa sch. : ORU
Oral Roberts University is a private school in Tulsa, Oklahoma. It was founded relatively recently, in 1963, by the late evangelist Oral Roberts.

42. H.I.V. drug : AZT
AZT is the abbreviated name for the drug azidothymidine, much used in the treatment of HIV/AIDS. AZT was originally developed in the seventies as a potential treatment for retroviruses (cancer-causing viruses), although it was never approved for use in treatment. In 1984, it was confirmed that AIDS was caused by the human immunodeficiency virus (HIV), so scientists turned to known antiviral drugs in the search for a viable treatment. Burroughs-Wellcome came up with a treatment regime using AZT, and filed a patent in 1985. The patent was challenged in court but the patent expired anyway in 2005 without any decision being made. There are now at least four generic forms of AZT approved for sale in the US.

48. Places for judokas : DOJOS
The Japanese word dojo literally means “place of the way”. Originally the term applied to training halls that were found in or beside temples. The teaching in a dojo was not limited to the martial arts, but in the Western world we use the dojo as the name for a training facility for judo, karate and the like.

A judoka is someone who practices the modern martial art of judo.

50. Mail that isn’t opened : POSTCARD
The studying and collecting of postcards is known as “deltiology”, from the Greek word “deltos” meaning “writing tablet, letter”.

54. Striking part : PEEN
The peen of a hammer is on the head, and is the side of the head that is opposite the striking surface. Often the peen is in the shape of a hemisphere (as in a Ball-peen hammer), but usually it is shaped like a claw (mainly for removing nails).

59. 2007-08 N.B.A. M.V.P., to fans : KOBE
Kobe Bryant plays basketball for the LA Lakers. Kobe Bryant got his name from a menu would you believe? His parents were in a Japanese restaurant and liked the name of “Kobe” beef, the beef from around the city of Kobe on the island of Honshu in Japan.

63. “___ Dinka Doo” : INKA
“Inka Dinka Doo” was Jimmy Durante’s theme song, a novelty piece composed by Durante in 1934. Such was his association with the song that when Durante’s charity paid for a heated therapy swimming pool in Port Arthur, Texas in 1968, it was named the “Inka Dinka Doo Pool”.

67. Manhattanite, e.g., informally : NYER
The island we know as Manhattan was inhabited by the Lenape Indians when the first Europeans explorers arrived in the area. According to the logbook of one of the officers on Henry Hudson’s yacht, the island was called “Manna-hata” in the local language, from which the modern name derives.

70. Kit ___ (candy bars) : KATS
I grew up eating Kit Kat bars as a kid, as the chocolate confection has been around since the thirties. Kit Kats didn’t hit the shelves in the US until the seventies. I’ve seen new varieties of Kit Kat over in the UK, such as an orange-flavored version, but haven’t seen anything like that over here.

71. City ESE of the 10-Down : OSH
Osh is the second largest city in the former Soviet Republic of Kyrgyzstan. Osh was a center of silk production and lies along the old Silk Road, the trade route that traversed Asia.

Down
1. Bond girl Barbara : BACH
Barbara Bach is the actress who played Bond girl Anya Amasova opposite Roger Moore in “The Spy Who Loved Me”. Bach has been married to Beatles drummer Ringo Starr since 1981.

2. Watchdog org. : OSHA
The Occupational Safety and Health Administration (OSHA) was created in 1970 during the Nixon administration. OSHA regulates workplaces in the private sector and regulates just one government agency, namely the US Postal Service.

4. Accessory for Annie Hall : NECKTIE
I suppose if there is any Woody Allen movie that I enjoy watching, it’s “Annie Hall” from 1977. I think Diane Keaton is a great actress and she is wonderful in this film. You’ll see Paul Simon as well, making a rare movie appearance, and even Truman Capote playing himself. The film is also famous for sparking a movement in the fashion world to adopt the “Annie Hall” look, that very distinctive appearance championed by Diane Keaton as the Annie Hall character.

9. ___ Gardens : BUSCH
The Busch Gardens group of theme parks was originally envisioned as a vehicle for the promotion of Anheuser-Busch products, so free beer samples were made available to patrons (but no longer!). The Tampa location was the first of the parks to be opened, in 1959. It has an African theme, whereas the only other US Busch Gardens property, in Williamsburg, Virginia has a European theme. There are plans to open a third park in Dubai, although the project has been put on hold due to the current financial climate.

10. Kazakh border lake : ARAL SEA
The Aral Sea is a great example of how man can have a devastating effect on his environment. In the early sixties the Aral Sea covered 68,000 square miles of Central Asia. Soviet Union irrigation projects drained the lake to such an extent that today the total area is less than 7,000 square miles, with 90% of the lake now completely dry. Sad …

The Republic of Kazakhstan in Central Asia is the world’s largest landlocked country. Kazakhstan was the last of the former Soviet Republics to declare itself independent from Russia.

11. *Magazine with an annual Hollywood issue : VANITY FAIR (vanity book & book fair)
A vanity publisher is one which charges authors to have their books published.

22. ___-i-noor diamond : KOH
The Koh-i-Noor Diamond was once the largest known diamond in the world, and is part of the British Crown Jewels. It is huge, weighing in at 105 carats. The Koh-i-Noor was mined in India and was owned by Indian royal families for centuries. It was presented to Queen Victoria in 1850 during the days of the British Raj.

25. Arthur and his family in “Hoop Dreams” : AGEES
“Hoop Dreams” is a 1994 documentary about two Chicago high school students who dream of becoming professional basketball players. “Hoop Dreams” is a relatively long film, running for 171 minutes. It’s especially long given that it was originally envisioned as a 30-minute short produced for PBS.

28. *Sailor : BLUEJACKET (Blue Book & book jacket)
I think we tend to associate the term “blue book” with the Kelley Blue Book that provides valuations for vehicles. The term itself dates back to the 15th century when we started calling an almanac or other publication full of information a “blue book”.

30. Number of colors on the Italian flag : TRE
The Italian tricolor is made up of three vertical blocks of green, white and red. The three colors have been said to signify many different things. One interpretation is that the green represents the country’s plains and hills, the white represents the snowy Alps and the red represents blood spilt in the Wars of Italian Independence.

40. Jungfrau, e.g. : ALP
The Jungfrau is a peak in the Bernese Alps in Switzerland. “Jungfrau” translates from German as “maiden” or “virgin”.

41. Il ___ : DUCE
Benito Mussolini (aka “Il Duce”, the “Duke”) was deposed in 1943 just a few weeks after the Allies invaded Sicily and started to bomb Rome. Fascist politicians voted to oust him, and Italian King Victor Emmanuel had him arrested. Hitler selected Lieutenant Colonel Otto Skorzeny to lead a group of German commandos in a daring rescue of his longtime ally. The rescuers were towed into Italian airspace in gliders, which the commandos flew into a mountainside close to where Mussolini was being held captive. The element of surprise was so significant, that the rescue was effected without a shot being fired. A small plane was flown in to transport Mussolini and Skorzeny out of Italy, and to safety in Vienna. Some months later, Mussolini returned to his homeland and fought on in parts of the country not yet taken by the Allies. As the end drew near, he made a run for Switzerland but was captured by Italian partisans. They executed him and took his body to Milan where it was put on display hanging upside down for all to see.

44. Place savers of a sort : DOG EARS
Dog ears are the folded-down corners of the pages of a book, and usually serve as bookmarks.

49. Santa Fe or Tucson, in brief : SUV
The term SUV, an acronym for Sports Utility Vehicle, was introduced by our marketing friends. Using the term Sports Utility Vehicle was a very clever way to get us to pay a lot of money for what was essentially a station wagon on a truck chassis, or at least it was back then.

53. Car repair chain : AAMCO
AAMCO is named after one of the two founders, Anthony A. Martino (AAM). The company was founded in 1963 in Philadelphia, and opened its first franchise in Newark that same year. There are now about 800 franchises, and AAMCO is the largest chain in the world specializing in automotive transmissions.

60. Steinbeck character : OKIE
John Steinbeck’s “The Grapes of Wrath” is set during the Great Depression. The novel tells the story of the Joad family from Oklahoma, farmers who had to leave their home and head for California due to economic hardship.