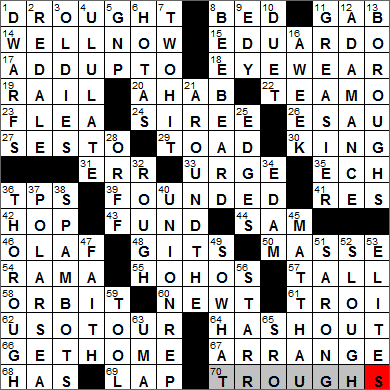 Today’s Wiki-est, Amazonian Googlies
Across
1. Dust Bowl phenomenon : DROUGHT
The Dust Bowl was the name given to a period in which severe dust storms ravaged the American and Canadian Prairies in the thirties. A major factor in the storms was the loss of the deep-rooted grasses native to the land that had been displaced by intensive farming. Without the grasses, the topsoil was blown away in a period of drought.

15. Facebook co-founder Saverin : EDUARDO
If you’ve seen the 2010 movie “The Social Network”, you’ll know about the turmoil that surrounded the launch of the website Facebook. The company’s co-founders are Mark Zuckerberg (played by Jesse Eisenberg) and Eduardo Saverin (Andrew Garfield). The way things are portrayed in the movie, Saverin was poorly treated by Zuckerberg after the “sharks” moved in, i.e. the professional investors. Supposedly Saverin’s stock position in the company was diluted “without his knowledge” from 34% to about 5%, to the benefit of the remaining investors.

20. “Grand, ungodly, godlike man” of fiction : AHAB
Captain Ahab is the obsessed and far from friendly Captain of the Pequod in Herman Melville’s “Moby Dick”.

22. Latin lover’s whisper : TE AMO
In Spanish one might say “I love you” (te amo) with flowers (con flores).

26. Biblical hunter : ESAU
Esau, was the grandson of Abraham and the twin brother of Jacob, the founder of the Israelites. Esau is portrayed as being very different from his brother, as a hunter and someone who loves the outdoor life.

Pope Paul VI was head of the Roman Catholic Church from 1963 to 1978. Pope Paul VI was born in the village of Concesio in Lombardy, Italy as Giovanni Battista Montini. The furture pope’s mother was from a noble family, and his father was a member of the Italian parliament.

35. Hierarchical level: Abbr. : ECH
We use the word echelon (ech.) to describe a rank, particularly in the military. The term comes from French, in which language it has the same meaning, although the original meaning in Old French is “rung of a ladder”.

36. Charmin and others, for short : TPS
TPing (toilet papering) is a prank involving the covering of some object or location with rolls and rolls of toilet paper. If you live in Texas or Minnesota that little “prank” is legal, but if you live here in California it is classed as mischief or vandalism.

41. Hi-___ : RES
In the digital world, resolution of a display, television, image etc. is defined by the number of pixels that can be displayed in a standard area (say a square inch). The emphasis today is on producing larger area displays/televisions, i.e increasing the number of pixels simply by increasing the size of the screen. In the past couple of decades the emphasis was on adding more pixels within the same screen size to increase resolution. This would just be wasted effort these days as further increases in resolution cannot be perceived by the eye. Now that TVs are capable of displaying such high resolutions, broadcasters are responding by producing a video signal of higher resolution that they call high-definition television, HDTV.

44. “Bewitched” wife, familiarly : SAM
The delightful sitcom “Bewitched” originally ran on ABC from 1964 to 1972. The lead character in the show is Samantha Stephens, played by the lovely Elizabeth Montgomery. Elizabeth was the daughter of Hollywood star Robert Montgomery.

46. Norway’s patron saint : OLAF
Of the many kings of Norway named Olaf/Olav (and there have been five), Olaf II is perhaps the most celebrated as he was canonized and made patron saint of the country. Olaf II was king from 1015 to 1028 and was known as “Olaf the Big” (or Olaf the Fat) during his reign. Today he is more commonly referred to as “Olaf the Holy”. After Olaf died he was given the title of Rex Perpetuus Norvegiae, which is Latin for “Norway’s Eternal King”.

48. Skedaddles : GITS
“Skedaddle ” is a slang term meaning “run away” that dates back to the Civil War.

50. Spin-heavy shot : MASSE
In billiards, a massé shot is one in which the cue ball makes an extreme curve due to the player imparting heavy spin on the ball with his or her cue.

55. Commercial snack cakes : HO HOS
Ho Hos snack cakes were first produced in San Francisco in 1967; not the best thing to come out of the sixties I’d say …

60. First name in the 2012 Republican primary : NEWT
Newt … what a name! Newt Gingrich was born Newton Leroy McPherson in 1943, in Harrisburg, Pennsylvania. Newt’s mother remarried when he was very young and his new father, Robert Gingrich, adopted Newt giving him the Gingrich name.

61. Enterprise counselor : TROI
Deanna Troi is a character on “Star Trek: The Next Generation” who is played by the lovely Marina Sirtis. Sirtis is a naturalized American citizen and has what I would call a soft American accent on the show. However, she was born in the East End of London and has a natural accent off-stage that is more like that of a true Cockney.

62. Private performances? : USO TOUR
The United Service Organization (USO) was founded in 1941 at the request of FDR “to handle the on-leave recreation of the men in the armed forces”. A USO tour is undertaken by a troupe of entertainers, many of whom are big-name celebrities. A USO tour usually includes troop locations in combat zones.

Down
4. Howl : ULULATE
A ululation is a high-pitched trill, a sound usually practiced by women in ritual situations. I came across the practice not too long ago as an expression of celebration at an Arab-American wedding.

5. Econ. stat : GNP
A country’s Gross National Product (GNP) is the value of all services and products produced by its residents in a particular year. GNP includes all production wherever it is in the world, as long as the business is owned by residents of the country concerned. Gross Domestic Product (GDP) is different, and is the value of all services and goods produced within the borders of the country for that year.

Crowded House is an Australian pop rock band. The band is usually referred to down under as “the Crowdies”.

8. Apiarist’s facial display : BEE BEARD
Some apiarists (beekeepers) can be seen wearing thousands of bees on the face, forming a bee beard as a form of entertainment for an audience.

9. Big name in ice cream : EDY
Dreyers’ ice cream sells its products under the name Dreyers in the Western United States, and Edy’s in the Eastern states. The company’s founders were William Dryer and Joseph Edy.

12. Unwillingness to yield : ADAMANCE
The words “adamant” and “adamantine” can mean hard like rock or stony, in the literal sense. In the more figurative sense, someone who is adamantine is stubborn or inflexible.

“Carmina Burana” is a cantata by Carl Orff based on a collection of medieval poems that go by the same name. The name translates as “Songs from Beuern”. The best known movement of the cantata by far is the dramatic “O Fortuna” used at the opening and closing of the piece. One study placed “O Fortuna” as the most often played piece of classical music in the UK over the past 75 years, largely due to its use in television commercials. Most famously it appeared in the US in ads for Gatorade and Old Spice aftershave.

34. Cracker topper : EDAM
Edam cheese takes its name from the Dutch town of Edam in North Holland. The cheese is famous for its coating of red paraffin wax, a layer of protection that helps Edam travel well and prevents spoiling. You might occasionally come across an Edam cheese that is coated in black wax. The black color indicates that the underlying cheese has been aged for a minimum of 17 weeks.

37. One is named for the explorer James Ross : POLAR SEA
The Ross Sea is a bay in the Southern Ocean of Antarctica. It was discovered by one James Ross in 1841. A more recent discovery, in the waters of the Ross Sea, was a 33 feet long giant squid that was captured in 2007.

38. Mass junk mailers : SPAMBOTS
Spambots are nasty little computer programs that send out spam emails and messages, often from fake accounts. This blog gets about 300 spam comments a day that I have to delete, almost all of which are written by spambots.

45. “The Bad News Bears” actor : MATTHAU
The actor Walter Matthau was born in the Lower East Side of New York City. Matthau is remembered for many collaborations on the big screen with Jack Lemmon. Matthau and Lemmon passed away within a year of each other, both having suffered from colon cancer, and are buried in the same cemetery in Los Angeles.

51. Unisex wrap : SARONG
Sarong is the Malay word for “sheath”, and a sarong was originally the garment worn by Malay men and women around their waists. The Malay sarong is actually a tube of fabric, about a yard wide and two-and-a-half yards “long”. Many variations of the sarong are worn all over South Asia and the Pacific Islands. I had occasion to wear one in Hawaii many years ago, and found it very … freeing!

56. “Octopus’s Garden” singer : STARR
“Octopus’s Garden” is a song released by the Beatles in 1969, one that was written and performed by drummer Ringo Starr. This was only Ringo’s second musical composition and he gets sole credit for the writing, even though it is well established that George Harrison gave him quite a bit of “help”. The idea for the song came to Ringo while he was on holiday with his family in Sardinia. The captain of the boat on which they were staying told Ringo that an octopus would spend its time traveling the seabed collecting shiny objects with which to make itself a garden. I don’t know how true that is, but Ringo seemed to find it inspiring.

63. Actress Thurman : UMA
Robert Thurman was the first westerner to be ordained a Tibetan Buddhist monk. Robert raised his children in the Tibetan Buddhist tradition and called his daughter “Uma” as it is a phonetic spelling of the Buddhist name “Dbuma”.