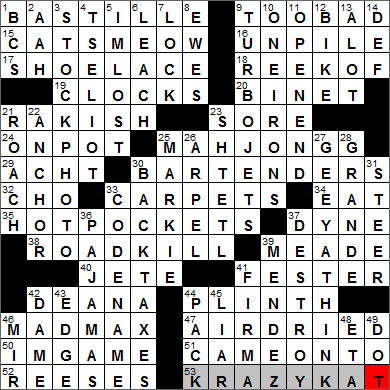 Today’s Wiki-est, Amazonian Googlies
Across
1. Setting for part of “A Tale of Two Cities” : BASTILLE
The Bastille is a former fortress in Paris that was used as a prison by the kings of France. On 14 July 1789 an angry mob stormed the Bastille during the French Revolution. The mob was actually after the stores of gunpowder in the fortress, and while inside the building freed seven prisoners and killed the Bastille’s governor. The storming of the Bastille became a symbol of the French Revolution and has been celebrated in France on every July 14th since 1790.

“A Tale of Two Cities” by Charles Dickens is the most printed book that was originally written in English. The “two cities” referred to in the title are of course London and Paris.

15. Aces, with “the” : CAT’S MEOW
Something described as “the cat’s meow” is particularly fine, the best. The term was popularized and perhaps coined by Tad Dorgan, a cartoonist active in the early 20th century.

20. Psychologist Alfred : BINET
The first usable intelligence test was invented by a French psychologist named Alfred Binet. Binet collaborated with Théodore Simon and together they produced the Binet-Simon Intelligence Scale that is still in use today for IQ tests.

24. High, in a way : ON POT
“Potiguaya” is the Mexican-Spanish word for “marijuana leaves”. The slang name “pot” comes from “potiguaya”.

25. Its positions are labeled North, South, East and West : MAHJONGG
“Mahjong” (also mahjongg and mah-jongg) is the Chinese word for “sparrow”. Mahjong is a game that originated in China, and is usually played by four players. There is a myth that the game was developed by the Chinese philosopher, Confucius. The myth also suggests that Confucius was fond of birds, and hence chose the name “sparrow”.

29. Number of Planeten : ACHT
In German, there are eight (acht) planets (Planeten) in the Solar System.

32. Funny Margaret : CHO
Margaret Cho is a very successful stand-up comedian, but she is also a fashion designer with her own line of clothing. Cho also acts, and you might have seen her in the John Travolta/Nicholas Cage movie “Face/Off” in which she played John Travolta’s FBI colleague.

37. Centimeter-gram-second unit : DYNE
An erg is a unit of energy or mechanical work. “Erg” comes from the Greek word “ergon” meaning “work”. A dyne is a unit of force. The name “dyne” comes from the Greek “dynamis” meaning “power, force”. Ergs and dynes are related to each other in that one erg is the amount of energy needed to move a force of one dyne over a distance of one centimeter.

39. Union V.I.P. : MEADE
George Meade was a career army officer with a depth of experience in civil and military operations even before the onset of the Civil War. During the war he rose to the level of commander of the Army of the Potomac, and is best remembered for leading the Union forces that defeated General Robert E. Lee at Gettysburg in 1863.

40. One might be performed en avant : JETE
A jeté is a leap in ballet, coming from the French word “jeter” meaning “to throw”. A jeté en avant is a “leap to the front”, towards the audience.

42. Country music’s Carter : DEANA
Deana Carter is a country singer from Nashville, Tennessee. Carter’s first album was a big seller, and was called “Did I Shave My Legs for This?”

44. Architectural base : PLINTH
A plinth is a block on which a column is based. The Greek word “plinthos” means “squared stone”.

46. Film hero chasing a motorcycle gang : MAD MAX
“Mad Max” is a series of Australian movies starring Mel Gibson in the title role. Well, Gibson played the lead in the first three films and Tom Hardy plays Max in the fourth movie, which is currently in production.

52. ___ Puffs : REESE’S
Reese’s Puffs is a breakfast cereal made from corn puffs that are flavored with Reese’s peanut butter and Hershey’s chocolate.

53. Target of thrown bricks, in early comics : KRAZY KAT
“Krazy Kat” is a successful comic strip that ran from 1913-1944 and was drawn by George Herriman.

Down
1. N.C.A.A. football ranking system : BCS
The Bowl Championship Series (BCS) is the system that is used to match up the top ten ranked NCAA football teams for five bowl games.

The broad-backed hippopotamus
Rests on his belly in the mud;
Although he seems so firm to us
He is merely flesh and blood.

9. Concorde features : TURBOJETS
The most famous Supersonic Transport (SST) was the Concorde, a plane that’s no longer flying. Concorde had that famous “droop nose”. The nose was moved to the horizontal position during flight to create the optimum aerodynamic shape thereby reducing drag. It was lowered during taxi, takeoff and landing, so that the pilot had better visibility. The need for the droop nose was driven largely by the delta-shaped wings. The delta wing necessitates a higher angle of attack at takeoff and landing than conventional wing designs, so the pilot needed the nose lowered so that he or she could see the ground.

10. Rare driving choices : ONE IRONS
The golf club known as the 1 iron is the lowest lofted of all the irons. However, golfer big hitter John Daly owned a 0 iron that was specially made for him by Wilson.

11. Like some flexible mortgages : OPEN-END
An open-end mortgage is one in which the borrower is free to increase the amount of the mortgage at a later time, provided certain predetermined conditions have been met.

14. “___ Poetry Jam” : DEF
“Def Poetry Jam” is an HBO television show that presents performances by established and up-and-coming poets. The show is hosted by Mos Def, a famous rapper and actor.

21. Raid target : ROACH
Raid insecticide has been killing bugs since 1956.

23. Historical community : SHTETL
The Yiddish word for “town” is “shtot”, and so “shtetl” is the diminutive form meaning “small town”. The fictional shtetl featured in the musical in “Fiddler on the Roof” is called Anatevka, which is also the title of my favorite song from the show.

26. Last name in women’s skin care : ARPEL
The Adrien Arpel cosmetic company was founded in 1962 and sold its products across Europe. The company started selling in the US in 1968.

28. Certain coffee order : GRANDE
Starbucks introduced us to coffee drinks in a whole range of volumes:

30. I.R.S. settlement : BACK TAXES
The Internal Revenue Service (IRS) was set up during the Civil War to raise money to cover war expenses. Prior to the introduction of income tax in 1862, the government was funded by levies on trade and property.

36. Some silk threads : PAJAMAS
Our word “pajamas” comes to us from the Indian subcontinent, where “pai jamahs” were loose fitting pants tied at the waist and worn at night by locals and ultimately by the Europeans living there. And “pajamas” is another of those words that I had to learn to spell differently when I came to America. In the British Isles the spelling is “pyjamas”.