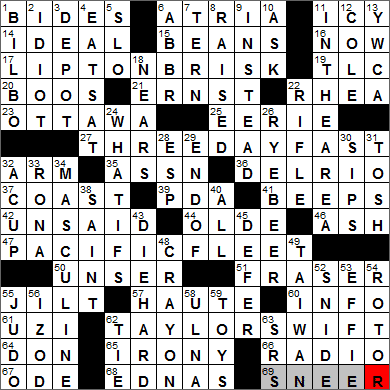 CROSSWORD SETTER: Angela Olson Halsted
THEME: The Need for Speed … each of today’s themed answers ends with a “speedy” synonym:

17A. Iced tea brand : LIPTON BRISK
27A. Observance prescribed in the Book of Esther : THREE-DAY FAST
47A. It’s headquartered at Naval Station Pearl Harbor : PACIFIC FLEET
62A. Country singer with the 2012 #1 hit “We Are Never Ever Getting Back Together” : TAYLOR SWIFT

Today’s Wiki-est, Amazonian Googlies
Across
6. Open-air rooms : ATRIA
In modern architecture an atrium is a large open space, often in the center of a building and extending upwards to the roof. The original atrium was an open court in the center of an Ancient Roman house. One could access most of the enclosed rooms of the house from the atrium.

15. Chili ingredients : BEANS
The full name of the dish that is often called simply “chili” is “chili con carne”, Spanish for “peppers with meat”. The dish was first created by immigrants from the Spanish Canary Islands in the city of San Antonio, Texas (a city which the islanders founded). The San Antonio Chili Stand was a popular attraction at the 1893 Chicago World’s Fair, and that stand introduced the dish to the rest of America and to the world.

17. Iced tea brand : LIPTON BRISK
Sir Thomas Lipton was a grocer in Glasgow, Scotland. He founded a tea packing company in North America in 1893 in Hoboken, New Jersey. He was very successful as his blends of tea became popular in the US. Despite the Lipton roots in the UK, Lipton black tea isn’t available there, so I’ve always thought of it as an American brand.

20. Greets the Red Sox at Yankee Stadium, say : BOOS
Yankee Stadium in the Bronx in New York City cost $1.5m to construct, making it the most expensive baseball stadium ever built.

21. Young’s partner in accounting : ERNST
Ernst & Young is one of the Big Four accountancy firms, alongside Deloitte, KPMG and PricewaterhouseCoopers. Ernst & Young is headquartered in London.

22. “Cheers” actress Perlman : RHEA
Rhea Perlman’s most famous role has to be “Carla Tortelli”, the irascible waitress in the long-running sitcom “Cheers”. Perlman is also a successful children’s author and has published a series of six books called “Otto Undercover”. She is of course married to Hollywood actor Danny DeVito, and has been so since 1982. I was saddened to hear not too long ago that Perlman and DeVito are splitting up.

23. Canadian capital : OTTAWA
Ottawa is the second largest city in the Province of Ontario (after Toronto) and is the capital city of Canada. The name “Ottawa” comes from an Algonquin word “adawe” which means “to trade”.

35. An “A” in N.C.A.A.: Abbr. : ASSN
The National Collegiate Athletic Association (NCAA) dates back to the Presidency of Theodore Roosevelt. When his son broke his nose playing football at Harvard, President Roosevelt turned his attention to the number of serious injuries and even deaths occurring in college sports. He instigated meetings between the major educational institutions leading to the formation of the Intercollegiate Athletic Association of the United States (IAAUS) in 1906, which was given the remit of regulating college sports. The IAAUS became the NCAA in 1910.

36. Old-time actress Dolores : DEL RIO
Dolores del Rio was a Mexican film actress of the silent era, when she was regarded as the female counterpart of Rudolph Valentino. She was a remarkably beautiful woman.

39. BlackBerry or iPod Touch, for short : PDA
A device like perhaps an iPhone, Droid, or Treo can be termed a Personal Digital Assistant (PDA).

44. Ye ___ Shoppe : OLDE
The word “olde” wasn’t actually used much earlier than the 1920s. “Olde” was introduced to give a quaint antique feel to brand names, shop names etc.

47. It’s headquartered at Naval Station Pearl Harbor : PACIFIC FLEET
The US Navy fleet is the largest in world, by far. The US Navy’s battle fleet tonnage is greater than that of the next 13 largest navies combined. The second largest navy belongs to China, and the third to Russia.

50. Al of auto racing : UNSER
The Unser family seems to have racing cars in its blood. Al Unser, Sr. won the Indy 500 on four occasions. Al’s brother Jerry was the first of the Unsers to compete at Indianapolis. Al’s other brother Bobby, won the Indy three times. Al’s son, Al Junior, won the Indy twice. Al Junior’s son is also a racing driver who competes at the Indy Speedway.

51. Actor Brendan of “Journey to the Center of the Earth” : FRASER
Brendan Fraser is a Canadian-American actor (both parents are Canadian), born in Indianapolis, Indiana. Fraser was inducted into Canada’s Walk of Fame in 2006, the first American-born actor to be so honored.

“Journey to the Center of the Earth” is a 2008 screen adaptation of the classic novel of the same name by Jules Verne. Star of the film is Brendan Fraser.

57. ___ cuisine : HAUTE
“Haute cuisine”, literally “high cooking” in French, is the name given to skillfully and elegantly prepared food, especially if it is in the French style.

61. Israeli-made weapon : UZI
The first Uzi submachine gun was designed in the late 1940s by Major Uziel Gal of the Israel Defense Forces who gave his name to the gun.

62. Country singer with the 2012 #1 hit “We Are Never Ever Getting Back Together” : TAYLOR SWIFT
Singer Taylor Swift had one of her first gigs at the US Open tennis tournament when she was in her early teens. There she sang the national anthem and received a lot of favorable attention for the performance.

65. Literary device much used by O. Henry : IRONY
O. Henry was the pen name of writer William Sydney Porter from Greensboro, North Carolina. O. Henry is famous for his witty short stories that have a clever twist in the tail.

68. Ferber and Krabappel : EDNAS
Edna Ferber won the Pulitzer for her novel “So Big”, which was made into a film a few times, most famously in 1953 starring Jane Wyman.

Down
1. ___ Baggins of “The Hobbit” : BILBO
Bilbo Baggins is the main character in Tolkien’s “The Hobbit”, and a character who features in “The Lord of the Rings” trilogy.

6. E.g., e.g. : ABBR
The Latin “exempli gratia” means “for the sake of example”, and we use it all the time in English. The term is almost always shortened to “e.g.”

7. Slender shorebird : TERN
Terns are seabirds that are found all over the world. The Arctic Tern makes a very long-distance migration. One Arctic Tern that was tagged as a chick in Great Britain in the summer of 1982, was spotted in Melbourne, Australia just three months later. The bird had traveled over 14,000 miles in over those three months, an average of about 150 miles a day. Remarkable …

12. Singer Nat King ___ : COLE
Nat King Cole’s real name was Nathaniel Adams Coles. Cole made television history in 1956 when his own show debuted on NBC, a first for an African-American. Cole couldn’t pick up a national sponsor, so in order to save money and possibly save the show, many guest artists worked for no fee at all – the likes of Ella Fitzgerald, Harry Belafonte and Peggy Lee. The show survived for a year, but eventually Nat King Cole had to pull the plug on it himself.

13. Service org. for females : YWCA
The Young Women’s Christian Association (YWCA) was founded in the late 1800s about 50 years after the YMCA, although the two organizations have always been independent of each other. Having said that, some YWCA and YMCA organizations have amalgamated at the local level and often share facilities. The YWCA is quite the organization, and is the largest women’s group in the whole world.

22. Remington product : RIFLE
Remington Arms Company was founded way back, in 1816. That makes Remington the oldest continuously operating manufacturer in North America. It is also the oldest company in the US still making its original product.

26. Hearty-flavored brew : RYE BEER
Rye beer is a beer in which some or all of the barley malt is replaced by malted rye.

31. Peter of reggae : TOSH
Peter Tosh was a musician from Jamaica, a member of the Wailers reggae band. Sadly, Tosh was murdered in a home invasion and extortion attempt in 1987.

33. Author Jaffe : RONA
Rona Jaffe was an American novelist perhaps most famous for two of her books, “The Best of Everything” and “Mazes and Monsters”. “The Best of Everything” was published in 1958 and has been compared with the HBO television series “Sex and the City” as it depicts women in the working world. “Mazes and Monsters” was published in 1981 and explores a role-playing game similar to Dungeons & Dragons and the impact it has on players.

43. Blockbuster Bruce Willis movie : DIE HARD
The original “Die Hard” movie was released in 1988 and is based on a 1979 novel by Roderick Thorp called “Nothing Lasts Forever”. In turn, “Nothing Lasts Forever” was a sequel to another Thorp novel, called “The Detective”. “The Detective” was adapted into a movie of the same name released in 1968 and starring Frank Sinatra in the lead role.

49. Taipei’s land : TAIWAN
“Taipei” translates from Chinese as “Northern Taiwan City” and indeed is situated at the northern tip of the island of Taiwan.

55. Cousin of karate : JUDO
Judo is a martial art from Japan that was developed relatively recently, in 1882. The name “judo” translates as “gentle way”.

56. Shirt brand that once had a crocodile symbol : IZOD
Jack Izod was a tailor of some repute over in England, producing shirts for King George V as well as other members of the Royal Family. As Izod was about to retire, he was approached for the use of his name by an American clothing manufacturer based in New York. The brand Izod of London was introduced to America in 1938.

The humerus is the long bone in the upper arm.