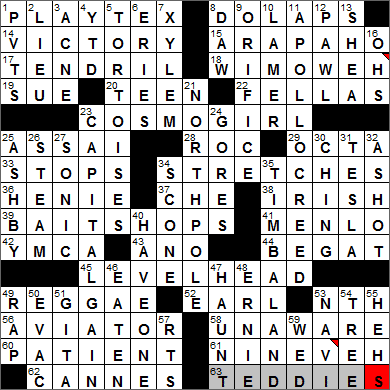 Today’s Wiki-est, Amazonian Googlies
Across
1. HanesBrands brand : PLAYTEX
Playtex Apparel makes bras and other lingerie. The most popular Playtex bras are iconic names such as “the Living Bra”, “the Cross Your Heart Bra” and “the Eighteen Hour Bra”. The famous slogan “it lifts and separates” is associated with the Cross Your Heart Bra and dates back to 1954.

15. Tribe whose name means “those with many tattoos” : ARAPAHO
The Arapaho tribe lived on the eastern plains of Colorado and Wyoming. The Arapaho traditionally wintered in small camps in the foothills of the Rockies, and then relocated to plains in the spring where they hunted the buffalo that were gathering to give birth to their young.

17. Feeler, of sorts : TENDRIL
A tendril is a specialized leaf or stem that is shaped like a spiral thread. Tendrils are used for support by climbing plants.

19. Name for the T. rex at Chicago’s Field Museum : SUE
The largest and best preserved dinosaur fossil ever found can be seen on display at the Field Museum of Natural History in Chicago. The fossil is a Tyrannosaurus rex that is thought to have weighed over 7 tons when alive. It was discovered in South Dakota in 1990 by paleontologist Sue Hendrickson. The specimen is nicknamed “Sue” after Hendrickson.

23. Bygone 20-Across fashion magazine : COSMOGIRL
“CosmoGirl” was a spin-off of “Cosmopolitan” magazine that was targeted at teens and was published from 1999 until 2008.

28. Mythical predator of elephants : ROC
The mythical roc is a huge bird of prey, reputedly able to carry off and eat elephants.

36. Skating gold medalist of 1928, 1932 and 1936 : HENIE
Sonja Henie was a World and Olympic Champion figure skater from Norway from the days when “amateur” sports stars were not paid. Henie made up for her lack of income from competing by developing a career in Hollywood. She was one of highest paid stars at the height of her movie career.

37. Figure in a beret : CHE
Ernesto “Che” Guevara was born in Argentina, and in 1948 he started to study medicine at the University of Buenos Aires. While at school he satisfied his need to “see the world” by taking two long journeys around South America, the story of which are told in Guevara’s memoir later published as “The Motorcycle Diaries”. While travelling, Guevara was moved by the plight of the people he saw and their working conditions and what he viewed as capitalistic exploitation. In Mexico City he met brothers Raul and Fidel Castro and was persuaded to join their cause, the overthrow of the US-backed government in Cuba. He rose to second-in-command among the Cuban insurgents, and when Castro came to power Guevara was influential in repelling the Bay of Pigs Invasion and bringing Soviet nuclear missiles to the island. Guevara left Cuba in 1965 to continue his work as a revolutionary. He was captured by Bolivian forces in 1967, and was executed. Fidel Castro led the public mourning of Guevara’s death, and soon the revolutionary was an icon for many left-wing movements around the world.

38. ___ Derby, annual sporting event since 1866 : IRISH
The Irish Derby is a classic horse race run annually at the Curragh Racecourse in County Kildare, Ireland. The modern Irish Derby was first run in 1866. It became an international event in 1962 when it was combined with the Irish Hospitals’ Sweepstake and became known as the Irish Sweeps Derby. The race was actually sponsored by Budweiser for many years.

41. ___ Park : MENLO
Menlo Park is a town in the San Francisco Bay Area. The town was built around land previously owned by two Irish immigrants. The pair called their property “Menlo Park”, naming it for Menlo in County Galway, which is where the Irishmen came from.

42. Geneva-based org. encouraging healthy living : YMCA
The YMCA is a worldwide movement that has its roots in London, England. There, in 1844, the Young Men’s Christian Association (YMCA) was founded with the intent of promoting Christian principles through the development of “a healthy spirit, mind and body”. The founder, George Williams, saw the need to create YMCA facilities for young men who were flocking to the cities as the Industrial Revolution flourished. He saw that these men were frequenting taverns and brothels, and wanted to offer a more wholesome alternative.

44. Word appearing 39 times in the King James Version of Matthew 1 : BEGAT
In 1604, King James I of England convened a conference at Hampton Court in order produce a new translation of the Bible, as the Puritan sect within the church had problems with prior versions. 47 scholars made new translations for the New Testament from Greek and from the Old Testament from Hebrew. The result is the King James Authorized Version.

52. One going to court? : EARL
In the ranking of nobles, an earl comes above a viscount and below a marquess. The rank of earl is used in the British peerage system and is equivalent to the rank of count in other countries. Other British ranks have female forms (e.g. marquess and marchioness, viscount and viscountess), but there isn’t a female word for the rank of earl. A female given the same rank as an earl is known simply as a countess.

56. Post, e.g. : AVIATOR
Wiley Post was a famous aviator from Grand Saline, Texas. Post flew around the world in 1930 with just a navigator as a companion, a journey that the pair completed in the record time of 8 days and almost 16 hours. This beat the existing record of 21 days set by the Graf Zeppelin in the prior year. Post repeated the trip in 1933, this time flying alone and using an autopilot. The circumnavigation took just under 7 days and 19 hours, and was the first time anyone flew solo around the world. Post died when the aircraft he was piloting crashed just two years later, in Alaska. The famous cowboy and actor Will Rogers, a friend of Post, also perished in the crash.

60. Job-like : PATIENT
The story of “the patience of Job” is told in the Book of Job in the Bible. Job exhibits great patience in refusing to condemn God after Satan was allowed to destroy his family and property.

61. City where Jonah preached : NINEVEH
Nineveh was an ancient city on the eastern bank of the Tigris River in modern-day Iraq. The ruins of the city are located just on the other side of the river from the Iraqi city of Mosul. At one time, Nineveh was the largest city in the world.

62. Cote d’Azur town : CANNES
Cannes is a city on the French Riviera, noted as host of the Cannes Film Festival. The idea of the annual film festival was adopted by the city just before WWII. However, the festival had to wait for the end of the war for its launch in 1946.

63. Nightwear : TEDDIES
The item of lingerie known as a teddy can also be called “camiknickers”. The alternative name was used when the one-piece garment was introduced in the twenties, a combination of a camisole and panties (aka knickers).

Down
5. They bite but don’t have teeth : TORTOISES
The external shell of a tortoise is actually fused to the creature’s ribcage. Tortoises often have long lives. The oldest recorded age for a tortoise is 188 years.

6. Great Lakes natives : ERIES
Lake Erie is the fourth largest of the five Great Lakes (Lake Ontario is the smallest). The lake takes its name from the Erie tribe of Native Americans that used to live along its southern shore. Erie is the shallowest of the Great Lakes, something for which nearby residents must be quite grateful. Being relatively shallow, Erie freezes over part way through most winters putting an end to the lake effect snow that falls in the snow belt extending from the lake’s edge.

7. Upward-flowing plant vessels : XYLEM
Xylem is a vascular tissue in many plants, the function of which is to transport water and some nutrients. It is xylem tissue that makes up what we know as wood.

8. Black bird : DAW
Daws are better known today as jackdaws and belong to the crow family. The jackdaw features in a famous pangram (i.e. a short sentence containing all 26 letters of the alphabet) … “Jackdaws love my big sphinx of quartz”.

10. Popular Debussy piece : LA MER
“La Mer” is a lovely group of three symphonic sketches for orchestra by the French composer Claude Debussy. Listen to it, and you can feel yourself at the ocean. “La Mer” is French for “The Sea”.

12. Machine part connecting to a gearwheel : PAWL
In a ratchet, there’s a rotating gear over which runs a spring-loaded finger, the piece of metal that makes the clicks as the gear rotates. That finger is called a “pawl”.

13. New York Jets home from 1964 to 1983 : SHEA
Shea Stadium in Flushing Meadows, New York was named after William A. Shea, the man credited with bringing National League baseball back to the city in the form of the New York Mets. Shea Stadium was dismantled (not imploded) in 2008-2009, and the site now provides additional parking for the new stadium nearby called Citi Field.

25. “Shampoo” director : ASHBY
“Shampoo” is a 1975 satirical movie directed by Hal Ashby and starring Warren Beatty, Julie Christie and Goldie Hawn. The whole film plays out over a 24-hour period, the day before Richard Nixon is elected president.

27. Sega mascot : SONIC
Sega is a Japanese video game company headquartered in Tokyo. Sega actually started out 1940 in the US as Standard Games and was located in Honolulu, Hawaii. The owners moved the operation to Tokyo in 1951 and renamed the company to Service Games. The name “Sega” is a combination of the first two letters of the words “Se-rvice” and “Ga-mes”.

30. “I ___” : CHING
The “I Ching” is an ancient Chinese text dating back to the 2nd millennium BC. The text deals with aspects of cosmology and divination, and perhaps served as a guide for making predictions of the future.

31. Unit of magnetic flux density : TESLA
The Tesla unit measures the strength of a magnetic field, and is named after the physicist Nikola Tesla. Nikola Tesla was born in Serbia, but later moved to the US. His work on mechanical and electrical engineering was crucial to the development of alternating current technology, the same technology that is used by equipment at the backbone of modern power generation and distribution systems.

34. Latte go-with : SCONE
The term “latte” is an abbreviation of the Italian “caffelatte” meaning “coffee (and) milk”. Note that in the correct spelling of “latte”, the Italian word for milk, there is no accent over the “e”. An accent is often added by mistake when we use the word in English, perhaps meaning to suggest that the word is French.

35. Hip-hop producer for Jay-Z, LL Cool J and Missy Elliott : TIMBALAND
“Timbaland” is the stage name of rapper and record producer Timothy Zachery Mosley. Mosley was given the Timbaland nickname as a play on the Timberland brand of boot.

50. “M*A*S*H” maneuver, for short : EVAC
“M*A*S*H” has only three stars in it (three asterisks, that is!). These asterisks first appeared on the poster for the 1970 movie, but they were omitted in the opening titles. The TV series went on to use the asterisks from the poster.

53. Riders on Direhorses in “Avatar” : NAVI
I went to the 3D version of “Avatar” when I saw it for the first time … it really is the only way to see that movie!

59. Jump the broom, so to speak : WED
In the US, the tradition of jumping the broom is associated with mainly African American marriage ceremonies, and perhaps has a stigma attached to it as it harks back to the days of slavery. However, the practice also takes place in Romany Gypsy weddings across Europe, particularly in Wales.