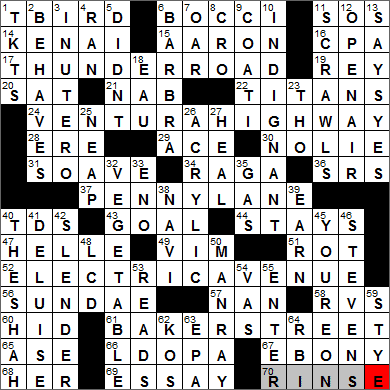 CROSSWORD SETTER: Gary Cee
THEME: Ways to Solve the Puzzle … each of today’s themed answers is a popular song that is also a “way”, a thoroughfare:

Today’s Wiki-est, Amazonian Googlies
Across
1. Sporty car introduced in ’55 : T-BIRD
Ford manufactured the Thunderbird (T-Bird) from 1955 to 2005, originally as a two-seater sporty convertible.

6. Italian lawn bowling : BOCCI
I’ve had the privilege of seeing bocce played in Europe, and have never seen it played on grass. I thought it was always played on dirt or some similar surface.

The Italian bowling game of “bocce” (anglicized as “bocci”) is based on a game played in Ancient Rome. “Bocce” is the plural of the Italian word “boccia” meaning “bowl”.

11. Urgent dispatch : SOS
The combination of three dots – three dashes – three dots, is a Morse signal first introduced by the German government as a standard distress call in 1905. The sequence is remembered as the letters SOS (three dots – pause – three dashes – pause – three dots), although in the emergency signal there is no pause between the dots and dashes, so SOS is in effect only a mnemonic. Similarly, the phrases “Save Our Souls” and “Save Our Ship” are also mnemonics, introduced after the “SOS” signal was adopted.

14. Alaska’s ___ Peninsula : KENAI
The Kenai Peninsula juts out into the Gulf of Alaska from Alaska’s southern coast. The Kenai Peninsula is home to several towns, including Homer, Alaska. Home is nicknamed “the end of the road” as it is a terminus for North America’s paved highway system.

15. Hank with the retired #44 : AARON
The great Hank Aaron has many claims to fame. One notable fact is that he was last major league baseball player to have also played in the Negro League.

22. Tennessee ___ : TITANS
The Tennessee Titans are a football team based in Nashville. The team relocated to Nashville from Houston in 1997, and was called the Tennessee Oilers for two seasons, before adopting the “Titans” moniker.

24. Where “the nights are stronger than moonshine,” per America (1972) : VENTURA HIGHWAY
“Ventura Highway” is a 1972 song by the band America. The lyrics “Ventura Highway” contain the phrase “purple rain”, a phrase which was to become famous as the title of a song, album and film by Prince. It has been suggested that Prince “lifted” the title for his hit from the America song.

28. Before, to Kipling : ERE
Rudyard Kipling was a British poet and writer famous for his tales of the British Raj, the rule of the British Empire in India. Kipling was actually born in Bombay, but returned with his family to England when he was very young. After being educated in England, he returned to India and from there traveled the world. Kipling’s most famous works are the stories “The Jungle Book”, “Just So Stories”, “The Man Who Would Be King”, and the poems “Mandalay”, “Gunga Din” and “If-”.

31. Dry Italian wine : SOAVE
Soave is a dry white wine produced in the area around the city of Verona in northeast Italy.

34. Bit of Indian music : RAGA
Raga isn’t really a type of music, but has been described as the “tonal framework” in which Indian classical music is composed. Ravi Shankar was perhaps the most famous raga virtuoso (to us Westerners).

37. Where “all the people that come and go stop and say hello,” per the Beatles (1967) : PENNY LANE
When in their teens, Paul McCartney and John Lennon would often head into the center of Liverpool together on the bus. The convenient place for them to meet was at the end of Penny Lane. Years later, Paul McCartney wrote the song “Penny Lane”, which was a big hit in 1967. “Penny Lane” was released as a double A-side record with “Strawberry Fields Forever” penned by John Lennon. Coincidentally, Strawberry Field was also a real location, not far from Penny Lane in Liverpool. Strawberry Field was a Salvation Army Children’s Home in the garden of which Lennon would play as a child. I don’t think Lennon and McCartney ever really forgot their roots …

47. Figure in the tale of Jason and the Argonauts : HELLE
In Greek mythology, Helle and Phrixus were a twin sister and brother who appeared in the story of Jason and the Argonauts. Phrixus was set to be sacrificed, but instead he and Helle were rescued by a flying golden ram dispatched by their mother. Helle fell off the back of the flying ram to her death, but Phrixus survived and took the golden fleece from the ram. It was this Golden Fleece that Jason sought with his Argonauts.

52. Where “we gonna rock down to,” per Eddy Grant (1983) : ELECTRIC AVENUE
There’s an unusually named street in the Brixton area of London: Electric Avenue. The street name inspired reggae song from the eighties called “Electric Avenue” written and sung by Eddy Grant. It was to be Grant’s only number one record, but a fun one, I think …

57. One of the Bobbsey twins : NAN
The “Bobbsey Twins” series of children’s novels was first written by Edward Stratemeyer in 1904. Stratemeyer used the pseudonym Laura Lee Hope, as did subsequent authors who wrote 72 books in the series between 1904 and 1979. The title characters were two sets of fraternal twins, one called Bert and Nan (who were 12) and the other called Flossie and Freddie (who were 6).

61. Where “you’ll drink the night away and forget about everything,” per Gerry Rafferty (1978) : BAKER STREET
Gerry Rafferty’s song 1978 “Baker Street” was inspired by Rafferty’s early days busking in Baker Street underground station in London. The song includes a fabulous saxophone solo that had a remarkable impact on the use of the saxophone in popular music. Saxophone sales jumped after the record was released, as did the use of the instrument in television advertising, giving rise to the term “the Baker Street Phenomenon”. What is perhaps even more remarkable is that the solo was originally intended for the guitar. On the day of the recording, the guitarist contracted for the solo didn’t turn up, so sax player Raphael Ravenscroft said that he could fill in and play the theme on the saxophone.

65. “Peer Gynt” widow : ASE
“Ase’s Death” is a movement in Edvard Grieg’s beautiful “Peer Gynt” suite. The suite is a collection of incidental music that Grieg composed for Ibsen’s play of the same name. Ase is the widow of a peasant, and the mother of Peer Gynt.

66. Anti-Parkinson’s prescription : L-DOPA
L-3,4-DihydrOxyPhenylAlanine, thankfully can be shortened to L-DOPA. Swedish scientist Arvid Carlsson won a Nobel Prize for showing that L-DOPA could be used to reduce the symptoms of Parkinson’s Syndrome.

67. Dark wood : EBONY
Ebony is a dark black wood that is very dense, one of the few types of wood that sinks in water. Ebony has been in high demand so the species of trees yielding the wood are now considered threatened. It is in such short supply that unscrupulous vendors have been known to darken lighter woods with shoe polish to look like ebony, so be warned …

68. “Hannah and ___ Sisters” : HER
“Hannah and Her Sisters” is a 1986 comedy-drama film that was written and directed by Woody Allen. Hannah is played by Mia Farrow, and Hannah’s two sisters are played by Barbara Hershey and Dianne Wiest.

Down
1. Times Square sign shown in lowercase letters : TKTS
The “tkts” booths sell discount theater tickets in Times Square in New York and in the West End of London.

3. Unborn : IN UTERO
“In utero” is a Latin term meaning “in the uterus”. The Latin “uterus” translates as both “womb” and “belly”. The Latin word was derived from the Greek “hystera” also meaning womb, which gives us the words “hysterectomy”, and “hysterical”.

6. Singer Streisand : BARBRA
Barbra Streisand has recorded 31 top-ten albums since 1963, more than any other female recording artist. In fact, she has had an album in the top ten for the last five decades, a rare achievement in itself.

7. Trireme implement : OAR
Triremes were galleys used in the Mediterranean by a number of cultures, including the Ancient Greeks and Romans. The trireme was so called because there were three rows of oars on each side of the vessel. The term “trireme” comes from the Latin “tres remi” meaning “three-oar”. There was also a less ambitious version of the trireme that had only two banks of oars, and that was known as a bireme.

8. ___-Magnon man : CRO
Remains of early man, dating back to 35,000 years ago, were found in Abri de Cro-Magnon in southwest France, giving the name to those early humans. Cro-Magnon remains are the oldest human relics that have been discovered in Europe.

9. Raccoon relative : COATI
A coati is a member of the raccoon family and is also known as the Brazilian aardvark, or the snookum bear. The coati is native to Central and South America, but can also be found in the southwest of the United States.

26. Plexiglas, e.g. : ACRYLIC
Acrylic glass is an alternative name for the transparent thermoplastic poly(methyl methacrylate). Acrylic glass was put on the market in 1933 as Plexiglas, and since then has been sold as Lucite and Perspex.

33. Musician Brian : ENO
Brian Eno started out his musical career with Roxy Music. However, Eno’s most oft-played composition (by far!) is Microsoft’s “start-up jingle”, the 6-second sound you hear when the Windows operating system is booting up. Eno might have annoyed the Microsoft folks when he stated on a BBC radio show:

35. Petrol : GAS
Petrol is of course the same thing as gasoline. “Petrol” comes via French from the Latin “petroleum”, itself derived from “petra” meaning “rock” and “oleum” meaning “oil”.

38. “Avatar” people : NAVI
I went to the 3D version of “Avatar” when I saw it for the first time. That really is the only way to see such a movie!

40. Overthrown ruler of 1979 : THE SHAH
The last Shah of Iran was Mohammed-Reza Shah Pahlavi, as he was overthrown in the revolution led by the Ayatollah Khomeini in 1979. The post-revolution government sought the extradition of the Shah back to Iran while he was in the United States seeking medical care (he had cancer). His prolonged stay in the United States, recovering from surgery, caused some unrest back in Iran and resentment towards the United States. Some say that this precipitated the storming of the US Embassy in Tehran and the resulting hostage crisis.

46. Former Supreme Court justice often seen in a bow tie : STEVENS
John Paul Stevens retired as an associate justice on the US Supreme Court in 2010 after having served for over 34 years. That made him the third longest serving justice in the history of the court. Stevens had been nominated by President Gerald Ford to replace Justice William O. Douglas, who had been the longest serving justice in the court (at over 36 years).

50. American avant-gardist : MAN RAY
Man Ray was an American modernist artist who spent most of his working life in Paris. Man Ray was born in South Philadelphia in 1890, and his real name was Emmanuel Radnitzky. His family adopted the name “Ray” in response to the anti-Semitic feeling that was prevalent at the time. Emmanuel was known as “Manny”, and he decided to assume the name Man Ray and use it for his work.

People described as being avant-garde are especially innovative. “Avant-garde” is French for “advance guard”.

63. Org. that monitors oil spills : EPA
The Environmental Protection Agency (EPA) was set up during the Nixon administration and began operation at the end of 1970.