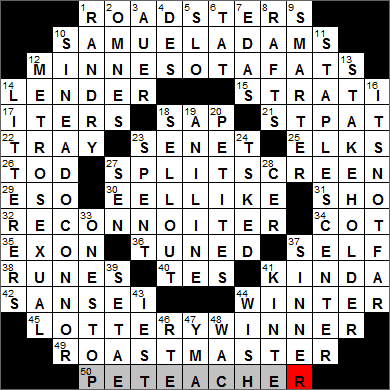 CROSSWORD SETTER: Todd Gross
THEME: Play Ball … there is a ball motif in the middle of the grid outlined by the black squares, and we have two ball-themed clues, one above and one below the “ball” in the grid:

Today’s Wiki-est, Amazonian Googlies
Across
1. Dragging vehicles : ROADSTERS
Back in the 18th century “drag” was slang for a wagon or buggy, as it was “dragged” along by a horse or horses. In the 1930s, the underworld adopted drag as slang for an automobile. This sense of the word was imported into automobile racing in the forties, giving the name to “drag racing”. A drag race is basically a competition between two cars to determine which can accelerate faster from a standstill.

10. Massachusetts governor after John Hancock : SAMUEL ADAMS
Samuel Adams was one of the Founding Fathers of the United States, from Boston Massachusetts. Adams followed his father into the family’s malthouse business a few years after young Samuel graduated from Harvard. There were generations of Adams family members who were “maltsters” i.e. those producing malt needed for making beer. Samuel Adams is often described as a brewer, but he was actually a malster. The Samuel Adams brand of beer isn’t directly associated with the Adams family, but it is named in honor of the patriot.

17. Cerebral canals : ITERS
An “iter” is an anatomical passageway, from the Latin word for “journey”.

The outermost layer of an organ is known as the cortex. The cortical layer that is most familiar to the man on the street (like me!) is that of the brain, the cerebral cortex.

21. Apostle of Ire. : ST PAT
There is a fair amount known about St. Patrick, some of which comes from two letters written in his own hand. St. Patrick lived in the fifth century, but was not born in Ireland. He was first brought to Ireland at about 16 years of age from his native Britain, by Irish raiders who made him a slave for six years. Patrick managed to escape and returned to his homeland where he studied and entered the Church. He went back to Ireland as a bishop and a missionary and there lived out the rest of his life. There seems to be good evidence that he died on March 17th (now celebrated annually as St. Patrick’s Day), although the year is less clear. The stories about shamrock and snakes, I am afraid they are the stuff of legend.

23. Board game found in Egyptian tombs : SENET
Senet is one of the oldest known board games. Senet was played in Ancient Egypt, and probably existed before 3100 BC. Game kits and images of the game have appeared in Egyptian tombs that have been excavated.

25. Group led by a Grand Exalted Ruler : ELKS
The Benevolent and Protective Order of Elks (BPOE) was founded in 1868 and is a social club that has about a million members today. The Elks started out as a group of men getting together in a “club” in order to get around the legal opening hours of taverns in New York City. The club took on a new role as it started to look out for poor families of members who passed away. The club now accepts African Americans as members (since the seventies) and women (since the nineties), but atheists still aren’t welcome.

31. “The L Word” network, in listings : SHO
“The L Word” is a Showtime drama series. The show deals with lesbian, bisexual and transgender people living in West Hollywood. “The L word” reference is to “lesbian”.

35. Yeomen of the Guard officer : EXON
The Yeoman of the Guard are the oldest military corps still existing in the UK. The role of the Yeoman of the Guard is to provide bodyguard protection for the British Monarch. although in modern times this role is purely ceremonial. One of the more famous duties of the Yeomen is a ceremonial search of the cellars of the Houses of Parliament prior to the State Opening of Parliament. The search commemorates the Gunpowder Plot of 1605 in which Guy Fawkes attempted to blow up the Parliament building.

38. Old letters : RUNES
A rune is a character in an alphabet that is believed to have mysterious powers. In Norse mythology, the runic alphabet was said to have a divine origin.

40. “Combats avec ___ défenseurs!” (line from “La Marseillaise”) : TES
“La Marseillaise” is the very stirring national anthem of France. The song was composed in 1792 by a French Army officer. It was adopted as a rallying call for volunteers during the French Revolution and was first sung out in Marseille. As a result, the anthem is called “The Marseillaise”, or “The Song of Marseille”.

42. Some Japanese-Americans : SANSEI
There are some very specific terms used to describe the children born to Japanese immigrants in their new country. The immigrants themselves are known as “Issei”. “Nisei” are second generation Japanese, “Sansei” the third generation (grandchildren of the immigrant), and “Yonsei” are fourth generation.

Down
2. Exeunt ___ (stage direction) : OMNES
“Exeunt omnes” is a stage direction instructing everyone on stage to exit. The term translates from Latin as “they all go out”.

3. Violin virtuoso Leopold : AUER
Leopold Auer was a Hungarian violinist, as well as a conductor and composer. Auer wrote a small number of works for the violin, the most famous of which is the “Rhapsodie Hongroise” written for violin and piano.

4. French preposition : DES
“Des” is a proposition in French which usually translates as “of” or “of the”.

6. Part of an equitable trade, figuratively speaking : TAT
The phrase “tit for tat”, meaning some sort of retaliation, has been around an awfully long time, since the mid-1500s. It might be derived from “tip for tap”, meaning “blow for blow”.

7. Writer LeShan and others : EDAS
Eda LeShan wrote “When Your Child Drives You Crazy”, and was host of the PBS television show “How Do Your Children Grow?”

10. Dublin-born singer with a 1990 #1 hit : SINEAD O’CONNOR
Sinéad O’Connor is a singer-songwriter from Dublin, a somewhat outspoken and controversial character. My sister-in-law was in the same class as her in high school, and she tells me that Sinéad stood out among her peers even back then.

12. GQ sort of guy : METROSEXUAL
I think it’s generally accepted that the term “metrosexual”, from “metropolitan heterosexual”, referes to a man who lives in an urban environment and puts a fair amount of money and energy into his appearance. That wouldn’t be me, then …

The Men’s magazine known today as “GQ” used to be titled “Gentlemen’s Quarterly”, and before that was called “Apparel Arts” when it was launched in 1931.

19. Chemical used in dyes : ANILINE
Aniline is a relatively simple organic compound. Hopefully aniline’s strong smell warns one to stay away as it is a poison.

27. Sessions in D.C., say : SEN
Jeff Sessions is the junior US Senator from Alabama, a Republican who has served in the Senate since 1996.

39. Gripping parts of gecko footpads : SETAE
The word “gecko” comes from an Indonesian/Javanese word “tokek”, which is imitative of the reptile’s chirping sound. In making such a sound, geckos are unique in the world of lizards. More interesting to me than a gecko’s chirping is its ability to cling to walls and to other vertical surfaces. Their feet are specially adapted with “toes” that make extremely intimate, close contact to a surface. The toes have millions of hairs called setae that enable the clinging. It isn’t suction that supports them, but rather van der Waals forces (weak “gravitational” attractions). Fascinating stuff …

41. “Roots” family surname : KINTE
Alex Haley’s 1976 novel “Roots” is based on Haley’s own family history. Haley claimed that he was a direct descendant of the real life Kunta Kinte, the slave who was kidnapped in the the Gambia in 1767. If you remember the fabulous television adaptation of “Roots”, you might recall that Kunta Kinte was played by LeVar Burton, who later went on to play another famous role, Geordi La Forge on “Star Trek: the Next Generation”.

48. Mil. branch disbanded in 1978 : WAC
The Women’s Army Auxiliary Corps (WAAC) was formed in 1942, and the unit was converted to full status the following year to become the Women’s Army Corps (WAC). Famously, General Douglas MacArthur referred to the WACs as his “best soldiers”, saying they worked harder, complained less and were better disciplined than men. The WACs were disbanded in 1978 and the serving members were integrated into the rest of the army.