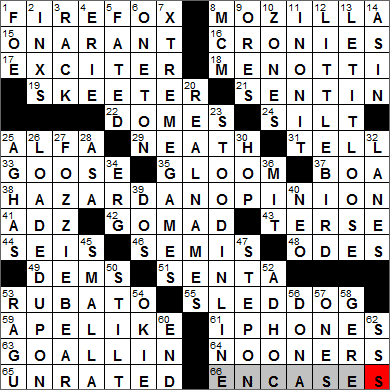 Today’s Wiki-est, Amazonian Googlies
Across
1. Help for someone just browsing? : FIREFOX
8. 1-Across source : MOZILLA
Open-source software has the source code available to users and is not protected by copyright. The intent is to allow collaboration in the development of the software in the hope of producing a better product. One of the more famous examples of an open-source product is the Mozilla Firefox Internet browser that some of you may be using to read this blog.

16. Buds : CRONIES
A crony is a friend or companion. The term originated as slang in Cambridge University in England in the 1600s. “Crony” is probably derived from the Greek “khronios” meaning “long-lasting”.

18. “The Consul” composer : MENOTTI
The composer Gian Carlo Menotti won a Pulitzer Prize in 1950 for his opera “The Consul”. Menotti’s “Amahl and the Night Visitors” has a special place in the repertoire, in that it is the first opera specifically composed for American television. “Amahl and the Night Visitors” was commissioned by NBC and had its debut at the NBC studios in Rockefeller Center on Christmas Eve, 1951. In today’s world of commercially-driven television, I can’t imagine a network commissioning a classical work …

19. What a screen may block : SKEETER
Skeeter is a slang term for mosquito, with “mosquito” being the Spanish for “little fly”. The female mosquito actually has to have a “blood meal” before she is able to lay her eggs.

24. Mouth filler : SILT
Silt might fill the mouth of a river.

33. Stimulate : GOOSE
“To goose” is to prod into action, albeit a little rudely. A “goose” is a prod or a pinch in the rear end.

37. Creature whose genus name and English name are the same : BOA
Boa constrictors are members of the Boidae family of snakes, all of which are non-venomous. Interestingly, the female boa is always larger than the male.

41. Tool shed tool : ADZ
An adze (also adz) is similar to an axe, but different in that the blade of an adze is set at right angles to the tool’s shaft. An axe’s blade is set in line with the shaft.

44. Number of strings on a Spanish guitar : SEIS
“Seis” is Spanish for “six”.

51. Actress Berger : SENTA
Senta Berger is an actress from Austria, regarded by many as the leading German-speaking actress over the past few decades.

53. Not strictly adhering to tempo : RUBATO
“Tempo rubato” is a musical instruction encouraging the conductor or soloist to speed up and slow the tempo at his or her own discretion. Often singers and musicians vary the tempo anyway, giving the piece of music their own “imprint”.

61. Series begun in 2007 : IPHONES
Apple started selling the iPhone at 6 pm local time on 29 June 2007, with hundreds of customers lined up outside stores all over the world. Not me. I use a pay-as-you-go phone from T-Mobile that cost me less than $45 for the whole of last year for calls and text (including many to Ireland) …

Down
1. Goliath, e.g. : FOE
In the story of David and Goliath, the Israelites and the Philistines faced each other in battle at the Valley of Elah. Goliath was the warrior champion of the Philistines and each day he challenged the Israelites to send out their champion to decide the battle in a one-on-one fight. No one was courageous enough to accept the challenge until young David agreed to face the mighty Goliath. And of course David felled the giant soldier with a stone from his sling.

4. ___ Railroad, 1832-1960 : ERIE
The Erie Railroad operated from 1832 to 1960, and connected New York City with Lake Erie. The Erie Railroad was largely built as compensation for the towns in the Southern Tier of New York who lost business when the Erie Canal was completed in 1825.

7. They might include BMX and wakeboarding, informally : XTREME GAMES
The X Games are annual events, with a Summer X Games held every year as well as a Winter X Games. It’s very much a commercial venture, with all aspects controlled by the TV station ESPN. The games focus on extreme action sports, like skateboarding and freestyle motocross in the summer and various extreme snowboarding events in the winter.

8. Year “Tosca” premiered : MCM
Unlike so many operas, “Tosca” was a big hit right from day one, when it was first performed in 1900 at the Teatro Costanzi in Rome. “Tosca” is currently the eighth-most performed opera in America, although I’ve only seen it once myself.

13. Triple-platinum Gloria Estefan album with “Rhythm Is Gonna Get You” : LET IT LOOSE
Gloria Estefan is a Cuban American singer who was born in Havana. Estefan fled Cuba along with her family after the Cuban Revolution, and ended up in Miami. Her father fought for the US military in Vietnam and also took part in the doomed Bay of Pigs invasion. Years later, Gloria herself was approached by the CIA to work for the agency due to her skill with languages. She ended up doing quite well singing instead …

25. Eastern generals : AGHAS
“Aga” (also “agha”) is a title that was used by both civil and military officials in the Ottoman Empire.

27. Orange children’s character : FOZZIE BEAR
Fozzie Bear is one of the Muppets, and is an orange bear wearing a pork pie hat who works as a not-so-great standup comic. There is an urban myth that “Fozzie” is named after the Muppets creator Frank Oz (i.e. F. Oz), but in fact he is named for the person who built the mechanism for wiggling Fozzie’s ears: one Faz Fazakas.

28. Actor Butterfield of “Hugo” : ASA
Asa Butterfield is a child actor from London, England. Butterfield played the title character in the powerful Holocaust film called “The Boy in the Striped Pyjamas”, released in 2008.

“Hugo” is a 2011 film adaptation of the novel by Brian Selznick called “The Invention of Hugo Cabret”. It’s all about a young boy who lives in the Gare Montparnasse train station in Paris, with young Asa Butterfield playing the lead role. The film was shot in 3D, and was the first 3D film directed by Martin Scorsese. “Hugo” was well received by the critics, but I must admit that it didn’t wow me …

34. Bit of work : ERG
An erg is a unit of energy or mechanical work. “Erg” comes from the Greek word “ergon” meaning “work”. A dyne is a unit of force. The name “dyne” comes from the Greek “dynamis” meaning “power, force”. Ergs and dynes are related to each other in that one erg is the amount of energy needed to move a force of one dyne over a distance of one centimeter.

53. ___ Bolognese : RAGU
The Ragu brand of pasta sauce is owned by Unilever. The name ” Ragù” is the Italian word for a sauce used to dress pasta, however the spelling is off a little. In Italian the word is “Ragù” with a grave accent over the “u”, but if you look at a jar of the Unilever sauce, it is spelled “Ragú” on the label, with an acute accent. Sometimes I think we just don’t try …

54. Sooner alternative : OKIE
An Okie is someone from Oklahoma.

The 1889 Indian Appropriations Act officially opened up the so called Unassigned Lands, land in Oklahoma on which no Native American tribes had settled. Once the Act was signed, those lands became available for settlement. People that settled the same lands illegally, prior the date specified, were termed “Sooners” as their situation was defined in the “sooner clause” of the Act.

56. Spanish title : DONA
In Spain, a title of respect for men is “Don”. The equivalent female title is “Dona”.

58. “Days of Heaven” co-star, 1978 : GERE
Richard Gere has played such great roles on the screen, and I find him to be a very interesting character off the screen. Gere has been studying Buddhism since 1978 and is a very visible supporter of the Dalai Lama and the people of Tibet.

“Days of Heaven” is a 1978 romantic drama film starring Richard Gere and Brooke Adams as two poor farm workers who try to trick a wealthy farmer (played by Sam Shepherd) out of his fortune.