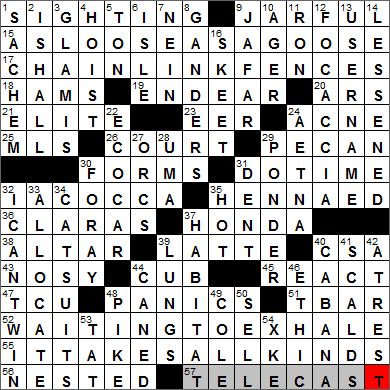 Today’s Wiki-est, Amazonian Googlies
Across
18. On-air hobbyists? : HAMS
Amateur radio enthusiasts were originally called ham operators by professional telegraph operators, and the term was intended to be insulting. It came from the similar term “ham actor”, describing a person who is less than effective on the stage. But amateur operators eventually embraced the moniker and so it stuck.

20. Aristotle’s “___ Rhetorica” : ARS
“Art of Rhetoric” (Ars Rhetoric) is a discourse written by the Greek philosopher Aristotle on the art of persuasion.

23. Suffix with cannon : -EER
A cannoneer is an artillery gunner.

32. “If you can find a better car, buy it” pitchman : IACOCCA
Lee Iacocca was a lot more successful at Chrysler than he was earlier in his career at Ford. Iacocca is credited with the turnaround of Chrysler in the eighties, but he is also credited with the failure of the Ford Pinto. He didn’t get on well with Henry Ford II so he was fired from the Ford Motor Company.

35. Like some fake redheads : HENNAED
Henna has been used for centuries as a dye, not just for leather and wool, but also for the hair and skin. In modern days, henna is also used for temporary tattoos.

The magnificent Whoopi Goldberg’s real name is Caryn Elaine Johnson. Goldberg is multi-talented, and is one of a very short list of entertainers to have won all four major showbiz awards:

37. Fit for the road, say : HONDA
The Honda Fit (called the Jazz in some markets) is a subcompact hatchback. We looked at the Fit when shopping for a new car recently, but opted for the larger Toyota Prius instead, a choice we have not regretted …

39. ___ macchiato : LATTE
A latte macchiato is a coffee drink made from hot foamed milk to which espresso is added on top. The name “latte macchiato” translates from Italian as “stained milk”, as the espresso “stains” the foamed milk when it is poured into the cup.

40. “Deo vindice” was its motto: Abbr. : CSA
The Confederate States of America (CSA) set up government in 1861 just before Abraham Lincoln took office. Jefferson Davis was selected as President of the CSA at its formation and retained the post for the life of the government.

The CSA had its own Great Seal, with the motto “Deo Vindice” that can be translated from Latin as “With God as Our Judge”.

43. In the wrong business? : NOSY
To be nosy is to be into someone else’s business.

47. Big 12 sch. : TCU
Texas Christian University (TCU) is a private school in Fort Worth, Texas. TCU used to be called AddRan Male & Female, named after an AddRan Clark, the son of Addison Clark who died at the age of 3-years-old from diphtheria. Poor young AddRan was named after his father and his brother, Addison and Randolph.

51. Pico Mountain innovation of 1940 : T-BAR
A T-bar is a type of ski lift in which the skiers are pulled up the hill in pairs, with each pair standing (not sitting!) either side of T-shaped metal bar. The bar is placed behind the thighs, pulling along the skiers as they remain standing on their skis (hopefully!). There’s also a J-bar, a similar device, but with each J-shaped bar used by one skier at a time.

Pico Mountain Ski Area is in Vermont and is one of the oldest commercial ski resorts in the state. Pico Mountain opened in 1937, and the US’s first T-bar lift went into operation there in 1940.

52. 1992 chick-lit best seller set in Phoenix : WAITING TO EXHALE
“Waiting to Exhale” is a 1995 film that is based on a novel of the same name by Terry McMillan. The movie stars Whitney Houston and is directed by Forest Whitaker. The storyline is about four friends who are “waiting to exhale”, waiting until the day they can feel comfortable in a committed relationship with a man.

Down
1. Algonquian chief : SACHEM
“Sachem” is the word for a chief in Native American tribes in the northeast of the US, particularly in Algonquian tribes.

3. One of Macbeth’s thanedoms : GLAMIS
Thanes were Scottish aristocrats. The most famous thanes have to be the Shakespearean characters Macbeth (the Thane of Glamis, later Thane of Cawdor) and MacDuff (the Thane of Fife). Other thanes in “Macbeth” are Ross, Lennox and Angus, as well as Menteith and Caithness.

6. Key : ISLE
A “key” (also “cay”) is a low island offshore, as in the Florida Keys. Our term in English comes from the Spanish “cayo” meaning “shoal, reef”.

8. Look-sees : GANDERS
To take “a gander” is to take a long look. It’s a term we’ve been using since the 1880s and comes from the idea that in taking a long look one might be craning one’s neck like a goose (or gander).

9. “Aladdin” villain : JAFAR
Jafar is the bad guy in the animated film “Aladdin”. Jafar was important enough to get his name front and center in the sequel called “Aladdin 2”, which is usually referred to as “The Return of Jafar”.

11. Wood or Underwood : RON
Ronnie Wood is one of the Rolling Stones. The Stones were formed in 1962, and Wood joined in 1975. Prior to his stint with the Stones, Wood was a member of the Jeff Beck Group as well as the Faces.

Ron Underwood is a film and television director. The most famous movie that Underwood directed is probably 1991’s “City Slickers” starring Billy Crystal and Jack Palance.

12. Thick base for pizza : FOCACCIA
Focaccia is a flatbread from Italy that is often topped with herbs, vegetables and sometimes meat making it similar to pizza. The name “focaccia” comes from the Latin “focus” meaning “hearth, place for baking”.

24. Fortune 100 company named after a smoker : AETNA
When the health care management company known as Aetna was founded, the name was chosen to evoke images of Mt. Etna, the European volcano.

27. “The Two Towers” army : ORCS
According to the author Tolkien, Orcs are small humanoids that live in his fantasy world of Middle-earth (also called “Mordor”). They are very ugly and dirty, and are fond of eating human flesh.

28. Portrayer of June in “Henry & June” : UMA
Robert Thurman was the first westerner to be ordained a Tibetan Buddhist monk. Robert raised his children in the Tibetan Buddhist tradition and called his daughter “Uma” as it is a phonetic spelling of the Buddhist name “Dbuma”.

The 1990 movie “Henry & June” is loosely adapted from the book of the same name by Anaïs Nin. The book is based on diaries written by Nin telling of her part in a love triangle with American author Henry Miller and his wife June, played by Uma Thurman in the movie.

33. Earmark : ALLOCATE
Political earmarks are provisions on bills that are inserted by an interested party to funnel funds towards a particular project or district. The earmark takes away from the Executive Branch the ability to manage certain funds associated with the bill that were originally meant to support the bill’s intent.

35. Like chop-shop cars : HOT
After a car is stolen it might be delivered to a “chop shop”, a workshop that can break up the vehicle so that it can be sold for parts.

37. Element : HABITAT
An “element” is an environment that is naturally suited to an individual, as in “he is in his element”. Someone in his element might be in his habitat.

40. Place to change trunks : CABANA
Our word “cabana” comes from the Spanish “cabaña”, the word for a small hut or a cabin.

41. Barista’s injuries : SCALDS
The person who serves coffee in a coffee shop is often called a “barista”. “Barista” is the Italian for “bartender”.

44. Did a rush job on? : CANED
A rush is the stem of a marsh plant (also called a rush) that can be used in making baskets, mats etc.

49. ___ Hamels, 2008 World Series M.V.P. : COLE
Cole Hamels is a starting pitcher for the Philadelphia Phillies. Hamels is married to Heidi Strobel who was a contestant on the sixth series of the reality television show “Survivor”.

53. Body image, briefly : TAT
The word “tattoo” was first used in English in the writings of the famous English explorer Captain Cook. In his descriptions of the indelible marks adorning the skin of Polynesian natives, Cook anglicized the Tahitian word “tatau” into our “tattoo”.

54. Vintage Jaguar : XKE
Jaguar started out as a manufacturer of sidecars for motorcycles back in 1922, when the company was known as the Swallow Sidecar Company (SS for short). The company changed its name to Jaguar after WWII, because of the unfortunate connotations of the letters “SS” at that time.