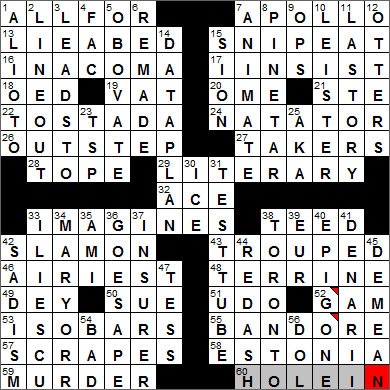 CROSSWORD SETTER: Bruce Haight
THEME: Four Times One … there is a note with today’s puzzle:

Four answers in this puzzle are incomplete. The missing part can be found in four other places in the grid.

So, the four “across” answers at the top and bottom of the grid are completed by the word “ONE”, and those four numbers ONE have been drawn for us using the black squares, at the top-, bottom-, left- and right-center of the grid:

Today’s Wiki-est, Amazonian Googlies
Across
1. Start of a motto first published in an 1844 book : ALL FOR (ONE)
“All for one, and one for all” is a motto associated with the title characters in the Alexandre Dumas novel “Three Musketeers”. Actually, it is the motto of the Three Musketeers and their comrade d’Artagnan …

7. 1967 disaster : APOLLO (ONE)
Apollo 1 was planned to be the first manned mission in NASA’s lunar landing program. Sadly, the three crew members perished in a tragic cabin fire that took place in a launch pad test. The astronauts who died were Gus Grissom (the second American to fly in space), Edward White (the first American to walk in space) and Roger Chaffee (the pilot for the planned Apollo 1 mission).

18. It took 70 years to complete, in brief : OED
The “Oxford English Dictionary” (OED) contains over 300,000 “main” entries and 59 million words in total. It is said it would take a single person 120 years to type it out in full, and it took 70 years to complie and publish the first edition. The longest entry for one word in the second edition of the OED is the verb “set”. When the third edition was published in 2007, the longest entry for a single word became the verb “put”. Perhaps not surprisingly, the most-quoted author in the OED is William Shakespeare, with his most quoted work being “Hamlet”. The most-quoted female author is George Eliot (aka Mary Ann Evans).

20. Cockney abode : ‘OME
The East End of London is home to the Cockney, and Cockneys are famous for dropping their aitches, as in “home” becoming “‘ome”.

22. Tex-Mex order : TOSTADA
In Mexican cuisine, a tostada is a flat or bowl-shaped tortilla. “Tostada” translates literally from Spanish as “toasted”.

24. Swimmer : NATATOR
“Natator” is a fancy word for a swimmer. “Natator” is simply the Latin for swimmer.

28. Be a tippler : TOPE
“To tope” is to drink alcohol excessively and habitually.

48. Earthen casserole dish : TERRINE
A terrine is a cooking dish with a tightly-fitting lid made from glazed earthenware. A terrine is used for cooking in an oven, and should not be confused with a “tureen”, which is a serving dish for soups and stews.

49. Susan of “L.A. Law” : DEY
The actress Susan Dey first appeared on “The Partridge Family” when she was 17-years-old and had no acting experience. Years later, Dey won a Golden Globe Award for playing the leading role of Grace Van Owen in “L. A. Law”.

51. Japanese vegetable : UDO
Udo is a perennial plant native to Japan known taxonomically as Aralia cordata. The stems of udo are sometimes boiled up and served in miso soup.

53. Some map lines : ISOBARS
An isobar is a line on a weather map connecting points of equal barometric pressure.

55. Old guitarlike instrument : BANDORE
A bandora (also “bandore”) is a plucked string-instrument that was popular during the Renaissance, particularly in England.

58. Country where marinated bear is a specialty food : ESTONIA
Estonia is one of the former Soviet Socialist Republics and is located in Northern Europe on the Baltic Sea, due south of Finland. Estonia has been overrun and ruled by various empires over the centuries. The country did enjoy a few years of freedom at the beginning of the 20th century after a war of independence against the Russian Empire. However, Estonia was occupied again during WWII, first by the Russians and then by the Germans, and then reoccupied by the Soviets in 1944. Estonia has flourished as an independent country again since the collapse of the USSR in 1991.

59. Serious rap : MURDER (ONE)
There are two degrees of murder in US legal system, as well as voluntary and involuntary manslaughter. Basically, these are defined as:

Down
1. Former San Francisco mayor Joseph : ALIOTO
Joseph Alioto was the 36th mayor of San Francisco, serving from 1968 to 1976.

5. Inversely egg-shaped : OBOVATE
A leaf is described as obovate if it is egg-shaped, with the narrower end attached to the stalk.

6. Like “The Karate Kid” and “Total Recall” : REMADE
The 1984 film “The Karate Kid” starred Ralph Macchio in the title role, with Pat Morita playing the enigmatic karate teacher Mr. Miyagi. There is an excellent 2010 remake, starring Jaden Smith (Will Smith’s son) as the Karate Kid himself, with Jackie Chan playing the teacher.

8. It helps one get a grip : PINE TAR
Pine tar is applied to the handles of baseball bats as it is a sticky substance and improves the batter’s grip. In a 1983 game, the Yankees manager Billy Martin protested a home run hit by George Brett of the Royals because the pine tar on his bat extended beyond the regulation 18 inches. The home run was later allowed as it was determined that the 18-inch rule was in place for economic reasons, and had nothing to do with competitive advantage. If pine tar gets on a baseball it renders it unusable for play, and baseballs cost money!

10. Three-pronged fishing spear : LEISTER
A trident is a three-pronged spear, also known as a trishula, leister or gig.

15. Priory in “The Da Vinci Code” : SION
The Priory of Sion is presented in the preface of Dan Brown’s novel “The Da Vinci Code” as a secret society that did in fact exist. However, there is a lot of evidence that the priory was an invention, created in forged documents in the sixties. Regardless, Dan Brown’s book is a really enjoyable read.

33. Two-time Romanian president Ion : ILIESCU
Ion Iliescu was the first President of Romania after the Revolution of 1989 that overthrew the brutal Nicolae Ceaușescu regime.

35. Athos, to Porthos, to Aramis : AMI
The “Three Musketeers” were Athos, Porthos and Aramis, and their young protégé was D’Artagnan. A musketeer was an infantry soldier who was equipped with a musket. Stranglely enough, Alexandre Dumas’ “Three Musketeers” really didn’t use their muskets and were better known for prowess with their swords.

37. John Hancock, e.g. : INSURER
John Hancock Financial was founded in 1862. The company was named in honor of the American patriot John Hancock.

40. Inferior imitator : EPIGONE
An epigone is second-rate imitator of perhaps an artist or philosopher. The term comes from the Greek “epigonos” which means “one born after”.

41. Ancient Roman coins : DENARII
The denarius (plural “denarii”) is a small silver coin that was used in Ancient Rome. Derived from the Latin “deni” meaning “containing ten”, a denarius had the value of ten asses. Today’s “dinar” is a common coin in the Arab world and is named for the old Roman coin. The dinar name was chosen in the days when Arabs were conquering large swathes of the old Roman Empire.

42. Extreme cruelty : SADISM
A sadist is someone who derives pleasure from inflicting pain, with that pleasure often being sexual in nature. The term “sadist” comes from the Marquis de Sade who was known to exhibit such tendencies.

44. Tree whose wood is used in guitar-making : RED ASH
Red Ash is also known as Green Ash, and is a deciduous tree. The wood is used to make guitars as a replacement for the more traditional White Ash as it has similar tonal characteristics and is lighter in weight.