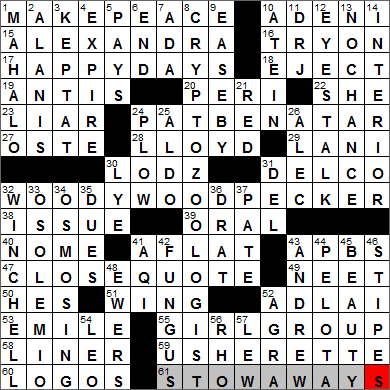 Today’s Wiki-est, Amazonian Googlies
Across
10. Certain Arabian Peninsula native : ADENI
Someone from the seaport of Aden is known as an Adeni.

Aden is a seaport in Yemen, located on the Gulf of Aden by the eastern approach to the Red Sea. Aden has a long history of British rule, from 1838 until a very messy withdrawal in 1967.

15. Nancy Pelosi’s Emmy-nominated daughter : ALEXANDRA
Alexandra Pelosi is a journalist and documentary filmmaker. Pelosi worked as an NBC producer on the road with the George W. Bush campaign in 2000. She used camcorder footage that she captured during that time to create a documentary called “Journeys with George” that earned her several Emmy nominations. Alexandra is the youngest child of Democratic politician Nancy Pelosi.

17. Mork first appeared on it : HAPPY DAYS
“Mork & Mindy” was broadcast from 1978 to 1982. We were first introduced to Mork (played by Robin Williams, of course) in a special episode of “Happy Days”. The particular episode in question has a bizarre storyline culminating in Fonzie and Mork having a thumb-to-finger duel. Eventually Richie wakes up in bed, and alien Mork was just part of a dream! Oh, and “Nanu Nanu” means both “hello” and “goodbye” back on the planet Ork. “I am Mork from Ork, Nanu Nanu”. Great stuff …

20. Graceful genie of myth : PERI
In Persian mythology, peris are fairy-like creatures who are descended from fallen angels and so must do penance before entering paradise. Over time, peris came from being regarded as evil beings and were instead welcomed as benevolent spirits.

24. “Crimes of Passion” Grammy winner : PAT BENATAR
Pat Benatar is a singer from Brooklyn, New York. Benatar’s biggest hits are “Hit Me with Your Best Shot”, “Love is a Battlefield” and “We Belong”.

28. Price of music : LLOYD
Lloyd Price is an R&B singer. One of Price’s hits is 1959’s “Personality”, a release that earned him the nickname “Mr. Personality”.

30. City of 750,000 SW of Warsaw : LODZ
The Polish city of Łódź is located about 85 southwest of Warsaw. Łódź is the third-largest city in the country. “Łódź” is a Polish word meaning “boat”.

32. Drummer with a star on the Walk of Fame : WOODY WOODPECKER
I guess the idea is that a woodpecker “drums” its beak against a tree.

40. Where Wyatt Earp operated the Dexter Saloon : NOME
Wyatt Earp is famous as one of the participants in the gunfight at the O.K. Corral. Earp was a city policeman in Wichita, Kansas and also in Dodge City, Kansas. Earp was also deputy sheriff in Tombstone, Arizona where the O.K. Corral gunfight took place. Years later, Earp joined the Alaska Gold Rush and with a partner built and operated the Dexter Saloon in Nome.

43. Urgent alerts, briefly : APBS
An All Points Bulletin (APB) is a broadcast from one US law enforcement agency to another.

47. It may be followed by [sic] : CLOSE QUOTE
“Sic” indicates that a quotation is written as originally found, perhaps including a typo. “Sic” is Latin for “thus, like this”.

49. Onetime big name in hair removal : NEET
The hair removal product “Neet” was launched in Canada in 1901, and was also sold as “Immac”. Today it is sold under the name “Veet”.

52. First name in 1950s politics : ADLAI
Adlai Stevenson ran for president unsuccessfully against Dwight D. Eisenhower in 1952 and in 1956. Some years after his second defeat, Stevenson served under President Kennedy as Ambassador to the United Nations. Stevenson was always noted for his eloquence and he had a famous exchange in a UN Security Council meeting during the Cuban missile crisis. Stevenson bluntly demanded that the Soviet representative on the council tell the world if the USSR was installing nuclear weapons in Cuba. His words were “Don’t wait for the translation, answer ‘yes’ or ‘no’!” followed up with, “I am prepared to wait for my answer until Hell freezes over!”

53. 1998-2007 Lebanese president Lahoud : EMILE
Émile Lahoud was President of Lebanon from 1998 to 2007. Lahoud was able to take office with Syrian pressure, and while in office he was regarded by many as “Syria’s man in Lebanon”.

Down
1. “___ nui loa” (Hawaiian words of gratitude) : MAHALO
In Hawaiian, “mahalo” means “thank you” and “mahalo nui loa” translates as “thank you very much”.

2. Self-titled debut album of 1991 : ALANIS
Alanis Morissette is a Canadian singer-songwriter. After releasing two pop albums in Canada, in 1995 she recorded her first album to be distributed internationally. Called “Jagged Little Pill”, it is a collection of songs with more of a rock influence. The album was a huge success, the highest-selling album of the 1990s, and the highest-selling debut album by any artist at any time (selling over 30 million units).

7. Novelist Leverson : ADA
Ada Leverson was a British writer, a great friend of Oscar Wilde. Leverson was played by actress Zoë Wanamaker in the 1997 film “Wilde” starring Stephen Fry in the title role.

8. Sasquatch studier, say : CRYPTOZOOLOGIST
The study of animals whose existence have not yet been substantiated is called cryptozoology.

11. Philly court legend : DR J
Julius Erving is a retired professional basketball player who was known as Dr. J, a nickname he picked up in high school. Dr. J was a trailblazer in many ways, being the first player associated with slam dunking and other moves above the rim.

21. Word with cent or cell : RED
Something that is “not worth a red cent” has very little value. The “red” reference is to the color of a copper penny.

I think the reference “red cell” is to red blood cells.

25. Designer Gucci : ALDO
Gucci was founded in Rome in 1921, by Guccio Gucci. Gruccio’s son Aldo took over the company after his father’s death in 1953. It was Aldo who established the international presence for the brand and opened the company’s first overseas store, in New York City.

30. Cleaning agent : LYE
Today when we purchase what is labelled as “lye”, it is caustic soda (sodium hydroxide). To clean out drains we might buy Crystal Drano which is sodium hydroxide (lye) mixed with sodium nitrate, sodium chloride (table salt) and aluminum. The contents of Drano work in concert to clear the clog. The lye reacts with any fats creating soap which may be enough to break up the clog. Also, the finely divided aluminum reacts with water creating tremendous heat so that that mixture boils and churns, then any hair or fibers are cut by the sharp edges of the nitrate and chloride crystals. Having said all that, I find that boiling water poured down the drain almost always does the job …

31. Atl. Coast state : DEL
The state of Delaware takes its name from Virginia’s first colonial governor, Englishman Thomas West, 3rd Baron De La Warr. Delaware is known as “The First State” as it was the first to ratify the US Constitution, in 1787.

32. Big name in gossip, once : WINCHELL
Walter Winchell was a famous and much-feared gossip columnist and radio commentator. Such was his reputation that the term “winchell” was introduced to describe someone who  wrote a politically intrusive gossip column.

33. Basis of the song “It’s Now or Never” : O SOLE MIO
“‘O sole mio” is a famous Italian song from Naples, written in 1898. The song’s lyrics are usually sung in the original Neapolitan, as opposed to Italian. The title translates from Neapolitan into “My Sun” (and not into “O, My Sun” as one might expect). It’s a love song of course, sung by a young man declaring that there is a sun brighter than that in the sky, the sun that is his lover’s face. Awww …

34. Dialyzing : OSMOSING
Osmosis is the movement of a solvent (often just water) across a semipermeable membrane. In the process of osmosis, the solvent tends to flow from an area of less concentration to an area of higher concentration. This sense of “absorbing” water effortlessly gives rise to the expression “learning by osmosis”.

42. Tinactin target : FUNGUS
Tolnaftate is an antifungal agent, sold under the Merck brand name “Tinactin”, as well as others. Tolnaftate can be purchased over the counter, and is found to be effective against jock itch, athlete’s foot and ringworm.

43. Merry-___ (clown) : ANDREW
A merry-andrew is a clown or a swindler’s assistant. It’s possible that the “Andrew” in question is Andrew Borde who was a physician to King Henry VIII of England.

44. Jai alai need : PELOTA
Basque pelota is a sport played in parts of Spain. Pelota is a racket sport in which a ball is hit against a specially-built wall called a frontón. The term “pelota” is also used for the ball in the game of jai alai. “Pelota” is derived from the Spanish word for “pellet”.

46. Frond supporters : STIPES
A stipe is stalk or stem-like structure that supports a fern frond or the cap of a mushroom.

52. Noted Indian burial site : AGRA
The most famous mausoleum in the world has to be the Taj Mahal in Agra, India. The Taj Mahal was built after the death of the third wife of Shah Jahan, Mumtaz Mahal (hence the name of the mausoleum). The poor woman died in childbirth delivering the couple’s 14th child.

56. Density symbol : RHO
Rho is the Greek letter that looks just like our Roman letter “p”.

57. Tennis’s Hoad : LEW
Lew Hoad was a former number-one ranked Australian tennis player. Hoad was ranked as the World No. 1 in 1956.