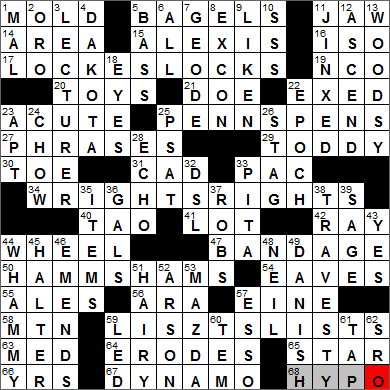 CROSSWORD SETTER: Susan Gelfand
THEME: Homophonic Celebrities … each of today’s themed answers is the possessive form of a well-known person’s name combined with a homophone of that possessive, all cleverly clued:

Today’s Wiki-est, Amazonian Googlies
Across
5. Bakery items with lox : BAGELS
The bagel was invented in the Polish city of Kraków in the 16th century. Bagels were brought to this country by Jewish immigrants from Poland who mainly established homes in and around New York City.

Lox is a cured salmon fillet, finely sliced. The term “lox” comes into English via Yiddish, and derives from the German word for salmon: Lachs.

15. “Dynasty” vixen : ALEXIS
“Dynasty” was ABC’s shot at CBS’s incredibly successful soap opera “Dallas”. Both shows were centered on wealthy oil families, with “Dynasty” starring John Forsythe and Linda Evans in the lead roles. The show didn’t really make much impact on the viewing figures for “Dallas” until season two, when Joan Collins joined the cast as the scheming ex-wife Alexis. “Dynasty” had a very successful run then, from 1981 to 1989.

16. Weather prefix with bar : ISO-
An isobar is a line on a weather map connecting points of equal barometric pressure.

17. Philosopher John’s tresses? : LOCKE’S LOCKS
John Locke was the English philosopher who postulated that the mind is a blank slate (or “tabula rasa”) when we are born, and that we fill that slate with our experiences and observations.

20. Transformers and Barbies : TOYS
Toy transformers can be morphed from their mundane looking appearance as a vehicle or perhaps an animal, into a robotic action figure.

The famous Barbie doll was created by businesswoman Ruth Handler and first appeared on store shelves in 1959. Barbie was based on a German fashion doll called Bild Lilli that was introduced in 1955. Lilli had been a German cartoon character before taking on the three-dimensional form. Prior to the introduction of Bild Lilli and Barbie, children’s dolls were primarily representations of infants.

25. Actor Sean’s writing implements? : PENN’S PENS
Actor Sean Penn is a two-time Oscar winner, for his roles in “Mystic River” released in 2003 and “Milk” released in 2008. Penn’s celebrity on screen is only matched with his fame off the screen. Apart from his “big name” marriages to singer Madonna and actress Robin Wright, Penn is also well known for political and social activism. He perhaps inherited some of his political views from his father, actor and director Leo Penn. As an actor, Leo refused to “name names” in front of the House Un-American Activities Committee and so was blacklisted in Hollywood and had to move into directing to put bread on the table. In later years as a director he gave his son Sean his first acting role, in a 1974 episode of “Little House on the Prairie”.

29. Hot, spicy drink : TODDY
The word “toddy” has come a long way. Its origins lie in the Hindi word for a palm tree, which is “tar”. The derivative word “tari” was used for palm sap, which came into English as “tarrie”, then “taddy” and “toddy”, all of which described an alcoholic drink made from fermented palm sap. That was back around 1600. Late in the 18th century, the palm sap drink called “toddy” had morphed into meaning any alcoholic drink made with liquor, hot water, sugar and spices.

31. Heel : CAD
Our word “cad”, meaning “a person lacking in finer feelings”, is a shortening of the word “cadet”. Cad was first used for a servant, and then students at British universities used “cad” as a name for a boy from the local town. “Cad” took on its current meaning in the 1830s.

The use of “heel” to mean a contemptible person dates back to the early 1900s when it was used in the American underworld to describe an incompetent criminal. It’s thought that such a person was in the “lowest position” and therefore “a heel”.

34. Aviator Wilbur’s entitlements? : WRIGHT’S RIGHTS
Wilbur was the older of the two Wright brothers, and he was born in 1867 in Millville, Indiana. By the time that Orville was born in 1871, the family was living in Dayton, Ohio. The Wrights spent a few years of their youth back in Richmond, Indiana, before settling in Dayton for the rest of their lives. The brothers both died in Dayton; Wilbur in 1912 and Orville in 1948.

40. The way, in Chinese philosophy : TAO
The Chinese character “tao” translates as “path”, but the concept of Tao signifies the true nature of the world.

44. Roulette centerpiece : WHEEL
The name “roulette” means “little wheel” in French, and the game as we know it today did in fact originate in Paris, in 1796.

50. Soccer star Mia’s meats? : HAMM’S HAMS
Mia Hamm is a retired American soccer player, a forward who played on the US national team that won the FIFA women’s World Cup in 1991. Hamm has scored 158 international goals, more than other player in the world, male or female.

57. Berlin article : EINE
Berlin is the capital and largest city in Germany, and is the second most populous city in the European Union (after London).

58. Kilimanjaro, e.g.: Abbr. : MTN
Kilimanjaro is a dormant volcano in Tanzania, and is the highest mountain in the whole of Africa. I was having lunch recently with the parents of my son’s girlfriend. The young lady’s mother casually mentioned in the conversation that she summited Kilimanjaro last year. I paid for lunch …

59. Composer Franz’s rosters? : LISZT’S LISTS
Franz Liszt was a Hungarian composer and a fabulous pianist. Particularly towards the end of his life, Liszt gained a tremendous reputation as a teacher. While he was in his sixties, his teaching jobs caused him to commute regularly between the cities of Rome, Weimar and Budapest. It is quite remarkable that a man of such advanced age, and in the 1870s, could do so much annual travel. It is estimated that Liszt journeyed at least 4,000 miles every year!

65. Part of Texaco’s logo : STAR
Texaco gets its name from “The TEXA-s CO-mpany”. Today’s it’s just a brand name owned by Chevron, but it used to be its own operation, founded as the Texas Fuel Company in 1901.

2. Granada gold : ORO
Granada is a city and province in Andalusia in the south of Spain. Granada is not to be confused with Grenada (different spelling), the island nation in the Caribbean that was invaded by the US in 1983.


4. Territory that became two states : DAKOTA
The Dakota Territory was formed in 1861 and ceased to exist with the admission to the Union of the states of North Dakota and South Dakota. The territory was split into two states largely due to lobbying by the Republican Party, which enjoyed a lot of support in the Dakota Territory. The admission of two states added to the political power of the party in the US Senate, by adding four safe Republican seats.

7. Rock with a glittery inside : GEODE
A geode is a rock in which there is a cavity lined or filled with crystal formations.

11. Brought bad luck : JINXED
A jinx is a charm or a spell, and the word “jinx” comes from an older word “jyng” from the 17th-century. A “jyng” was another word for the wryneck, a type of bird much used in witchcraft.

22. Several ages, in geology : EPOCH
Geologic time is divided into different units which are, starting from the longest:

24. Grub : CHOW
“Chow” is an American slang term for food that originated in California in the mid-1800s. “Chow” comes from the Chinese pidgin English “chow-chow” meaning “food”.

“Grub” is slang for food. The word “grub” has been used in this sense since way back in the 1600s, possible derived from birds eating grubs.

32. It’s faster than dial-up, in brief : DSL
DSL originally stood for Digital Subscriber Loop, but is now accepted to mean (Asymmetric) Digital Subscriber Line. DSL is the technology that allows Internet service be delivered down the same telephone line as voice service, by separating the two into different frequency signals.

33. Gyro bread : PITA
Pita is a lovely bread in Middle-Eastern and Mediterranean cuisines. Pita bread is usually round, and has a “pocket” in the center. The pocket is created by steam that puffs up the dough during cooking leaving a void when the bread cools. The pockets were a big hit in the seventies when someone came up with the idea of using them for fillings hence creating pita sandwiches or “pita pockets”.

48. Singer Young or Sedaka : NEIL
Neil Young is a singer and songwriter from Toronto, Ontario. Young is known for his solo work, as well as his earlier recordings with Buffalo Springfield and as the fourth member of Crosby, Stills & Nash. Young is also a successful movie director, although he uses the pseudonym “Bernard Shakey” for his movie work. Included in his filmography are “Human Highway” and “Greendale”.

49. From Copenhagen, say : DANISH
Copenhagen is the largest city and the capital of Denmark. I have never visited Copenhagen, but I hear it is a wonderful metropolis with a marvelous quality of life. The city is also very environmentally friendly, with over a third of its population commuting to work by bicycle.

53. Maker of the Protegé : MAZDA
Mazda is a Japanese car manufacturer based in the Hiroshima Prefecture in Japan.

The Protegé was one brand name of a whole family of compact cars made by Mazda between 1964 and 2003, with the whole group of cars going under the name of Familia. At one point, the guts of the Familia/Protegé was rebranded as the Ford Escort here in North America.

57. Former name of Exxon stations : ESSO
The brand name Esso has its roots in the old Standard Oil company as it uses the initial letters of “Standard” and “Oil” (ESS-O). The Esso brand was replaced by Exxon in the North America, but ESSO is still used in many other countries.

60. President pro ___ : TEM
“Pro tempore” can be abbreviated to “pro tem” or “p.t.” “Pro tempore” is a Latin phrase that best translates as “for the time being”. It is used to describe a person who is acting for another, usually a superior.