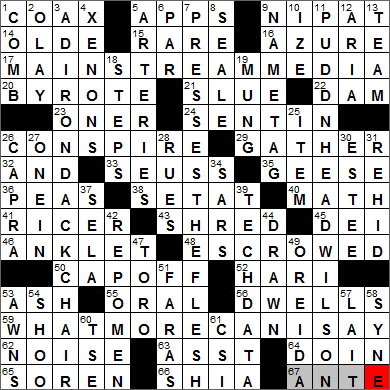 Today’s Wiki-est, Amazonian Googlies
Across
14. It may follow ye : OLDE
The word “olde” wasn’t actually used much earlier than the 1920s. “Olde” was introduced to give a quaint antique feel to brand names, shop names etc.

16. Sapphire alternative : AZURE
The word “azure” came into English from Persian via Old French. The French word “l’azur” was taken from the Persian name for a place in northeastern Afghanistan called “Lazhward” which was the main source of the semi-precious stone lapis lazuli. The stone has a vivid blue color, and “azure” has been describing this color since the 14th century.

23. Nonpareil : ONER
Something described as “nonpareil” has no equal, is a paragon. “Nonpareil” was an Old French word meaning “not equal”.

33. Noted trisyllabic metrist : SEUSS
Dr. Seuss was the pen name of Theodor Seuss Geisel. Geisel was commander of the Animation Department of the USAF during WWII. He was behind many propaganda films including one called “Our Job in Japan”. Even though the film was produced specifically as propaganda, this same movie was used after the war as a basis for the short feature “Design for Death”, a study of Japanese culture released in 1947 and winner of an Oscar for best Documentary.

35. Snow ___ : GEESE
The snow goose has two color-morphs, meaning that the same species can be a complete white color and also can have a grey body with a white head. These two color-morphs give the two common names for the species: snow goose and blue goose.

36. Snow ___ : PEAS
Snow peas are lovely vegetables, noted for having edible pods without that any inedible fiber.

45. ___ gratia : DEI
“Dei Gratia” is Latin for “By the Grace of God”. The term is used in the name of a monarch who is said to be ruling by divine right. For example, the full title of the UK’s Queen is “Elizabeth II, by the Grace of God, of the United Kingdom of Great Britain and Northern Ireland and of Her other Realms and Territories Queen, Head of the Commonwealth, Defender of the Faith”.

46. Sari accompaniment : ANKLET
The item of clothing called a “sari” (also “saree”) is a strip of cloth, as one might imagine, unusual perhaps in that is unstitched along the whole of its length. The strip of cloth can range from four to nine meters long (that’s a lot of material!). The sari is usually wrapped around the waist, then draped over the shoulder leaving the midriff bare. I must say, it can be a beautiful item of clothing.

48. Put safely away, in a way : ESCROWED
One type of escrow account is held by a trusted third party for two parties who have some contractual arrangement, an arrangement that is often in dispute. The third party only releases the funds when both parties have fulfilled their contractual obligations.

52. Mata ___ : HARI
Mata Hari was the stage name used by Margaretha Geertruida Zelle, born in the Netherlands in 1876. After an unsuccessful and somewhat tragic marriage, Zella moved to Paris in 1903 where she struggled to make a living. By 1905 she was working as an exotic dancer and using the name Mata Hari. She was a successful courtesan, notably moving in various circles of high-ranking military officers. She apparently worked as a double agent, both for the French and the Germans. When Mata Hari was accused by the French of passing information to the enemy, she was tried, found guilty and executed by firing squad in 1917 at the height of WWI.

63. Amanuensis, e.g.: Abbr. : ASST
An amanuensis is someone whose job is to copy or type out what has been written by another. An amanuensis is also someone who signs a document on behalf of another. The term comes from “-ensis” meaning “belonging to” and “manu-” meaning hand.

65. Danish man’s name with a line through the second letter : SOREN
Søren is a male name of Danish and Norwegian origin.

66. Actor LaBeouf : SHIA
Shia LaBeouf is an actor who started out in the Disney television series “Even Stevens”. Adult audiences might be more familiar with his leading role in the 2003 film “Holes”.

Down
2. Anti-aging product name : OLAY
Oil of Olay was developed in South Africa in 1949. When Oil of Olay was introduced internationally, it was given slightly different brand names designed to appeal in the different geographies. In Ireland we know it as Oil of Ulay, for example, and in France it is Oil of Olaz.

3. Lake cabin sight : ADIRONDACK CHAIR
An Adirondack chair is a wooden chair designed for use outdoors. The original Adirondack chair was designed in 1903 by one Thomas Lee, who was vacationing in Westport, New York in the Adirondack Mountains.

4. Some gas atoms : XENONS
The noble gases are those elements over on the extreme right of the Periodic Table. Because of their “full” complement of electrons, noble gases are very unreactive. The six noble gases that occur naturally are helium, neon, argon, krypton, xenon and radon.

11. 1894 novel whose title character likes to collect fingerprints : PUDD’NHEAD WILSON
“Pudd’nhead Wilson” is a novel by Mark Twain first published as a serial in “The Century Magazine” in 1893-4. The title character is a young lawyer who collects fingerprints as a hobby. Wilson eventually unmasks a murderer using fingerprints in the days before fingerprint technology was used to solve crimes.

19. Kind of bean : MUNG
Mung beans are native to India and are used in both savory and sweet dishes in many Asian cuisines.

26. “Prelude to War” documentarian, 1943 : CAPRA
I can’t tell you how many of Frank Capra’s movies are on my list of all-time favorites. He directed such classics as “It Happened One Night”, “Mr. Deeds Goes to Town”, “Lost Horizon”, “Mr. Smith Goes to Washington”, “Meet John Doe”, “Arsenic and Old Lace” and the holiday favorite “It’s a Wonderful Life”. Capra also did his bit during WWII, enlisting just a few days after Pearl Harbor was attacked. Given his great talent, and the fact that he enlisted at the relatively advanced age of 44, the US Army put him to work directing 11 documentary war films in the “Why We Fight” series, for which he was awarded the Distinguished Service Medal.

30. ___ Lauder, cosmetics giant : ESTEE
Estée Lauder was quite the successful businesswoman with a reputation as a great salesperson. Lauder introduced her own line of fragrances in 1953, including a bath oil called “Youth Dew”. “Youth Dew” was marketed as a perfume, but it was added to bathwater. All of a sudden women were pouring whole bottles of Ms. Lauder’s “perfume” into their baths, while using only a drop or two of French perfumes behind their ears. That’s quite a difference in sales volume …

34. Outbreak of 2003 : SARS
Sever Acute Respiratory Syndrome (SARS) is a viral disease in humans that went pandemic in 2002/2003. There were over 8,000 confirmed cases, and 12 deaths from the disease during that outbreak. There have been no known cases since 2003, although the disease has not yet been declared as “eradicated”.

37. Actress Ward : SELA
The actress Sela Ward turns up in crosswords a lot. Ward played Teddy Reed in the TV show “Sisters” in the nineties, and was in “Once and Again” from 1999-2002. I don’t know either show, but I do know her from the medical drama “House” in which she played the hospital’s lawyer, and Greg House’s ex-partner. That was a fun role, I thought. More recently Ward has been playing a lead role on “CSI: NY” and is a very welcome and much-needed addition to the cast …

42. 2010 Jude Law/Forest Whitaker movie : REPO MEN
“Repo Men” is a 2010 sci-fi film starring Jude Law and Forest Whitaker. The movie is based on an Eric Garcia novel called “the Repossession Mambo”, and wasn’t very well received by the critics.

49. Zesties! maker : ORE-IDA
Ore-Ida frozen foods are all made with potatoes. The company is located in Oregon, just across the border from Idaho. “Ore-Ida” is a melding of the two state names.

53. Grass appendages : AWNS
Awns are hair or bristle-like structures found in numerous species of plants. In some species, like barley, the awns can contain photosynthetic tissue.

57. Brest milk : LAIT
Brest is a port city in northwest France, the second largest military port in the country. Brest was an important base for German U-boats during WWII when France was occupied by the Nazis.

58. Last word of a party song : SYNE
The song “Auld Lang Syne” is a staple at New Year’s Eve, the words of which were written by Scottish poet Robbie Burns.

60. Japanese bourse: Abbr. : TSE
The Tokyo Stock Exchange (TSE) is the third largest stock exchange in the world, after New York and London.

A “bourse” is a stock exchange. The term is French in origin and usually applies to a European exchange.

61. Hit CBS series starting in 2000 : CSI
I’m told that the TV show “CSI” gets a lot of razzing by law enforcement professionals for its unrealistic portrayal of the procedures and science of criminal investigation. I don’t care though, as I just think it’s fun television.