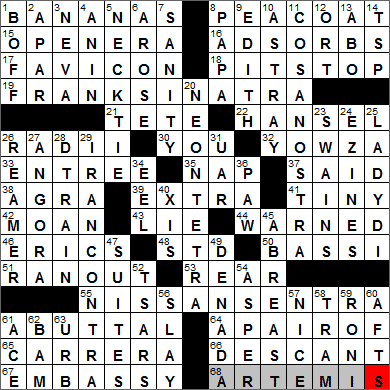 CROSSWORD SETTER: Michael Shteyman
THEME: Tra-La-La … today’s themed answers all end with -TRA, and there are a few TRAs at other places in some other answers, perhaps added for good measure:

Today’s Wiki-est, Amazonian Googlies
Across
1. Chiquita import : BANANAS
The Chiquita logo (Miss Chiquita, then Chiquita Banana) was originally created back in 1944 by Dik Browne. Browne was also the cartoonist who wrote and drew “Hägar the Horrible”.

15. 1968 to the present, in tennis : OPEN ERA
In the sport of tennis, the Grand Slam tournaments were opened up to professional players, and not just amateurs, in 1968. So, the period since then has been called the Open Era.

17. Small image displayed in a browser’s address bar : FAVICON
A favicon is a small icon, usually just 16×16 pixels in size. The most common place to see a favicon is at the extreme left of the address bar in a web browser. Some websites have their own distinctive favicon designs.

19. Subject of a 2010 biography subtitled “The Voice” : FRANK SINATRA
“Frank: The Voice” is a 2011 biography of Frank Sinatra written by James Kaplan.

Marie Antoinette was the wife of Louis XVI, the last king of France. She was the fifteenth of sixteen children born to the Empress Maria Theresa of Austria. The marriage to Louis, Marie Antoinette’s second cousin once removed, was arranged while the two were very young. The prospective bride was “handed over” to the French at a border crossing in 1770 and two weeks later she was married to the future king. Marie Antoinette was just 14 years of age at the time, and Louis only a year her senior. Both Louis and Marie Antoinette were doomed to lose their heads courtesy of the guillotine during the French Revolution.

33. It may have one or two sides : ENTREE
Entrée of course means “entry” in French. An entrée can be something that helps one get a “way in”, an interview for example perhaps helped along by a recommendation letter. In Europe, even in English-speaking countries, the entrée is the name for the “entry” to the meal, the first course. I found it very confusing to order meals when I first came to America!

37. Port ___ : SAID
Port Said is the Egyptian port city on the Mediterranean coast that is the northern terminus of the Suez Canal. Port Said was established during the construction of the canal, in 1859. The name was chosen in honor of Sa’id of Egypt who was ruling the country at that time.

39. Tabloid TV show co-hosted by Mario Lopez : EXTRA
Mario Lopez is an actor and television host from San Diego, California. Lopez came in second on the third season of “Dancing with the Stars”, appearing with his girlfriend at the time, professional dancer Karina Smirnoff.

46. Hollywood’s Roberts and others : ERICS
Eric Roberts is an actor from Biloxi, Mississippi. Eric is the older brother of actress Julia Roberts.

50. Several “Boris Godunov” parts : BASSI
Boris Godunuv was the Tsar of Russia from 1598 to 1605. Godunuv is perhaps better known these days because of the artistic works that are based on his life. Alexander Pushkin wrote the play “Boris Godunov”, partially using Shakespeare’s “Macbeth” to structure the storyline of Godunov’s life. Modest Mussorgsky then wrote a famous opera “Boris Godunov”, based on the Pushkin play.

55. Compact since 1982 : NISSAN SENTRA
The Nissan Sentra is sold as the Nissan Sunny back in Japan.

65. Line of Porsches whose name is Spanish for “race” : CARRERA
Porsche was founded in 1931 in Stuttgart, Germany by Professor Ferdinand Porsche. The company didn’t produce cars at first, but worked on design and development. The first big job awarded to the company was from the German government, to design a car for the people. The resutl was the Volkswagen Beetle. Yep, the Beetle is a Porsche design.

68. Goddess with a golden chariot : ARTEMIS
In Greek mythology, Zeus and Leto are the father and mother of the twins Apollo and Artemis. The twins are sometimes referred to as the Letoides, after their mother.

Down
3. Gulf of Finland feeder : NEVA
The Neva is a very large river that spills into the Gulf of Finland at the beautiful city of St. Petersburg. The river forms an expansive delta as it reaches the Baltic Sea and the delta gives rise to numerous islands, with the number of islands further increased by a network of canals. The historic part of the city is built on these islands giving St. Petersburg a very Venetian feel. I had the privilege of visiting the city some years ago, and I can attest that it is indeed spectacular …

7. “Madness put to good uses,” per George Santayana : SANITY
George Santayana was a Spanish philosopher who was raised and educated in the US. There are several famous quotations attributed to Santayana, the most famous of which is probably:

The one who does not remember history is bound to live through it again.

8. Nickname for Haydn : PAPA
Josef Haydn was an Austrian composer, often called the “Father of the Symphony” due to his prolific output of symphonies that helped define the form. Haydn was also the father figure among “the big three” composers of the Classical Period: Haydn, Mozart and Beethoven. Hayden was a good friend to Mozart, and a teacher of Beethoven.

9. First lady of the 1910s : EDITH
President Woodrow Wilson’s first wife was Ellen Axson. Ellen died in 1914 in the White House, having suffered from Bright’s disease. The following year, the president was introduced to a widow called Edith Galt. The couple quickly fell in love and were married in December 1915. Less than four years later, President Wilson had a debilitating stroke that left him partially paralyzed. Edith took over many routine matters of goverment normally handled by her husband, and vigorously opposed allowing Vice President Thomas R. Marshall assuming the powers of the office. As a result of the role she played while nursing her husband, Edith Wilson is sometimes called “the Secret President” and “the first female president of the United States”.

11. Dangerous family : COSA NOSTRA
Apparently “Cosa Nostra” is the real name for the Italian Mafia. “Cosa Nostra” translates as “our thing” or “this thing of ours”. The term first became public in the US when the FBI managed to turn some members of the American Mafia. The Italian authorities established that “Cosa Nostra” was also used in Sicily when they penetrated the Sicilian Mafia in the 1980s. The term “mafia” seems to be just a literary invention that has become popular with the public.

13. Type letters : ABO
The most important grouping of blood types is the ABO system. Blood is classified as either A, B, AB or O, depending on the type of antigens on the surface of the red blood cells. A secondary designation of blood is the Rh factor, in which other antigens are labelled as either positive or negative. When a patient receives a blood transfusion, ideally the donor blood should be the same type as that of the recipient, as incompatible blood cells can be rejected. However, blood type O-neg can be accepted by recipients with all blood types, A, B, AB or O, and positive or negative. Hence someone with O-neg blood type is called a “universal donor”.

20. Colorful fish : NEON TETRA
The neon tetra is a freshwater fish, native to parts of South America. The tetra is a very popular aquarium fish and millions are imported into the US every year. Almost all of the imported tetras are farm-raised in Asia and very few come from their native continent.

23. Country lads : SWAINS
A swain is a country lad, or a beau. Back in the 12th century a swain was a young man who attended a knight.

24. Newsweek and others : E-ZINES
“Newsweek” was a weekly American news magazine launched in 1933. The magazine ran into financial trouble starting in 2008 and eventually had to cease publication of a print version at the end of 2012. “Newsweek” continues to do business in an all-digital format after a merger with the news website “The Daily Beast”.

26. Metalworker’s tool : REAMER
A reamer is a tool used in metalwork to make holes of very accurate diameter, more accurate than holes made using a drill.

27. Sweater material : ANGORA
Angora wool comes from the Angora rabbit. On the other hand, the Angora goat produces the wool known as mohair.

28. It stops at Manhattan’s Washington Square and Rockefeller Center : D TRAIN
The D is a subway service that has been running in Manhattan, New York since 1940.

29. Affair of the 1980s : IRAN-CONTRA
The Iran-Contra affair (also called “Irangate”) came to light in 1986. The “Iran” part of the scandal was the sale of arms to Iran by the Reagan administration, initially to facilitate the release of US hostages. This was done in secret largely because there was ostensibly a US arms embargo in place against Iran. The “Contra” part of the scandal arose when the man in charge of the operation, Oliver North, took funds from the arms sales and funneled the cash to the Contra militants who were fighting to topple the government in Nicaragua.

31. Bygone political inits. : UAR
The UAR, United Arab Republic, was a union between Egypt and Syria made in 1958 and dissolved in 1961 when Syria pulled out of the arrangement.

36. Part of the Iams logo : PAW
Iams dog food was first produced by the animal nutritionist Paul Iams. Iams felt that household pets were suffering somewhat by being fed a diet of table scraps, so he developed a dry dog food that he thought was more nutritious and suitable for pet dogs. He founded the Iams company, now part of Procter & Gamble, in 1946.

49. “You’re welcome, amigo” : DE NADA
“Nada” is the Spanish word for “nothing”. “De nada” translates literally from the Spanish as “of nothing”, and is used to mean “you’re welcome” or “don’t mention it”. The French have the same expression “de rien”, also translating to “of nothing” and used the same way.

52. Line that ended in 1917 : TSARS
The last ruler of Imperial Russia was Tsar Nicholas II (of the House of Romanov). Famously, the Tsar and his family were murdered in 1918 in the basement of a house in Yekaterinburg, Russia by members of the Bolshevik secret police. The Tsar’s youngest daughter was 16-year-old Anastasia and rumors of her escape have persisted for years. The rumors grew with the help of numerous women who claimed to be Anastasia. In 2009, DNA testing finally proved that the remains of all of the Tsar’s immediate family, including Anastasia, have been found and identified.

58. Ride in London : TRAM
Over in the UK a tram is what we’d call a streetcar here in North America.

59. Rice-A-___ : RONI
Rice-a-Roni was introduced in 1958 by the Golden Grain Macaroni Company of San Francisco. The company was run by an Italian immigrant and his four sons. The wife of one of the sons served a pilaf dish at a family diner that was a big hit, so her brother-in-law created a commercial version by blending dry chicken soup mix with rice and macaroni. Sounds like “a San Francisco treat” to me …