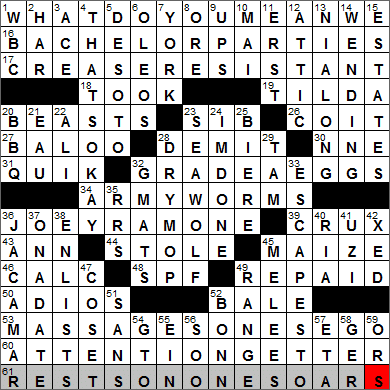 19. 2007 Oscar winner Swinton : TILDA
Tilda Swinton is an English actress, quite famous in her native land. Swinton made a big name for herself outside the UK when she played the “bad guy” in the 2007 movie “Michael Clayton”, opposite the “good guy” played by George Clooney.

26. San Francisco’s ___ Tower : COIT
Coit Tower is a renowned memorial in San Francisco that sits atop Telegraph Hill. The full name of the structure is the Lillian Coit Memorial Tower, recognizing a generous bequest to the city by wealthy socialite Lillie Hitchcock Coit. There is an urban myth in these parts that the tower was designed to resemble the nozzle of a fire hose, as Coit used to like chasing fires and hanging out with firemen.

27. Bear in “The Jungle Book” : BALOO
“The Jungle Book” by Rudyard Kipling was originally published in 1894 and is a collection of adventure stories or fables featuring the animals of the jungle and a young boy called Mowgli. Baloo is a sloth bear who teaches the cubs of a wolf pack the Law of the Jungle. His most challenging pupil however is no lupine, but the man-cub Mowgli.

30. Salem-to-Portland dir. : NNE
Salem is the state capital of Oregon. It is thought that the city takes its name from the older city of Salem, Massachusetts.

Portland is the largest city in Oregon. The city was founded by two claimholders from back East, one from Boston, Massachusetts and one from Portland, Maine. Both of the founders wanted to name the new city after their hometowns, and settled the dilemma with a coin toss. Portland won …

31. Classic brand with a bunny mascot : QUIK
Nestlé Quik was introduced in 1948, and is a flavored powdered milk drink. It was sold in Europe as “Nesquik”, and that brand name replaced “Quik” here in the US in 1999. The Nesquik mascot is the Quik Bunny. The Quik Bunny had a large “Q” on a collar around his neck, and with the brand name change this “Q” became an “N”, and he is now known as the Nesquik Bunny.

34. Crop-killing caterpillars : ARMYWORMS
An armyworm is the caterpillar stage of a moth. Armyworms are so called because they are known to eat everything in an area and then move onto the next food source like “an army”.

36. Rock icon for whom a Manhattan block is named : JOEY RAMONE
Joey Ramone was the frontman for the punk rock band called the Ramones. Joey Ramone died in 2001 and two years later the block where he lived on East 2nd Street in New York City was renamed Joey Ramone Place.

43. Massachusetts’ Cape ___ : ANN
Cape Ann is 30 miles north of Boston and is on the northernmost edge of Massachusetts Bay. The Cape was first mapped by the explorer John Smith. Early in his adventurous life Smith had been captured and enslaved by the Ottoman Empire. His “owner” in his days of slavery was a woman called Tragabigzanda, and apparently the slave and owner fell in love. What we know today as Cape Ann, Smith originally called Cape Tragabigzanda in her memory.

46. It has its limits, briefly : CALC
The Latin word “calculus” was used for a reckoning or an account, and originally applied to a pebble that was used to maintain a count. The Latin word came from the Greek for a pebble, “khalix”.

48. Burn prevention meas. : SPF
In theory, the sun protection factor (SPF) is a calibrated measure of the effectiveness of a sunscreen in protecting the skin from harmful UV rays. The idea is that if you wear a lotion with say SPF 20, then it takes 20 times as much UV radiation to cause the skin to burn than it would take without protection. I say just stay out of the sun …

60. Poke on Facebook, say : ATTENTION GETTER
When you “poke” someone on Facebook, an icon shows up on the poked person’s Facebook page telling them they have been “poked” and by whom. I guess it’s a way of saying “hi”, but I am very much a Facebook neophyte …

6. Some spreads : OLEOS
Emperor Louis Napoleon III of France announced a competition to develop a substitute for butter, a substitute that would be more accessible to the lower classes and more practical for the armed forces. In 1869, a French chemist called Hippolyte Mege-Mouries came up with something that he called oleomargarine, which was eventually manufactured under the trade name “margarine”. The name “oleomargarine” also gives us our generic term “oleo”.

7. Pennsylvania city or its county : YORK
York, Pennsylvania was named for the historic city of York in the North of England. York was one of the cities that served as a capital of the Continental Congress during the Revolutionary War. It was in York that the Articles of Confederation were drafted and adopted.

9. Brown letters? : UPS
United Parcel Service (UPS) is based in Sandy Springs, Georgia and has its own airline that operates out of Louisville, Kentucky.

10. When many fleurs bloom : MAI
In French, many flowers (fleurs) bloom in May (mai).

When I do count the clock that tells the time,
And see the brave day sunk in hideous night;
When I behold the violet past prime,
And sable curls all silver’d o’er with white;
When lofty trees I see barren of leaves
Which erst from heat did canopy the herd,
And summer’s green all girded up in sheaves
Borne on the bier with white and bristly beard,
Then of thy beauty do I question make,
That thou among the wastes of time must go,
Since sweets and beauties do themselves forsake
And die as fast as they see others grow;
And nothing ‘gainst Time’s scythe can make defence
Save breed, to brave him when he takes thee hence.

20. Grilling subject, informally : BBQ
It is believed that our word “barbecue” comes from the Taíno people of the Caribbean in whose language “barbacoa” means “sacred fire pit”.

Cassius Marcellus Clay, Jr. was born in 1942 in Louisville, Kentucky. Clay changed his name to Muhammad Ali when he converted to Islam in 1964. Who can forget Muhammad Ali lighting the Olympic flame for the 1996 games in Atlanta? Ali was presented with a gold medal during those ’96 Games, a replacement for the medal he won at the 1960 Olympics. He had thrown the original into the Ohio River as a gesture of disgust after being refused service at a “whites only” restaurant.

25. Brasserie offering : BIERE
A brasserie is a kind of French restaurant that’s usually a step up from a bistro. “Brasserie” is the French word for “brewery”, and the original brasseries in France served beer (bière) that was brewed on the premises.

29. Floppy lid : TAM
A tam o’shanter is a man’s cap traditionally worn by Scotsmen. “Tams” were originally all blue (and called “blue bonnets”), but as more dyes became readily available they became more colorful. The name of the cap comes from the title character of Robert Burns’ poem “Tam O’Shanter”.

32. Some univ. entrance exams : GMATS
If you want to get into a business school’s graduate program then you might have to take the Graduate Management Admission Test (GMAT), which will cost you about $250, I believe …

36. Iridescent green bird of tropical America : JACAMAR
Jacamars are beautifully elegant birds that are green in color. Jacamars are native to tropical areas in South and Central America.

41. Its 49-Down is about 200 meters : UZI
(49. Shooting statistic : RANGE)
The first Uzi submachine gun was designed in the late 1940s by Major Uziel Gal of the Israel Defense Forces who gave his name to the gun.

45. Riots : MELEES
“Melee” comes from the French “mêlée”, and in both languages the word means a “confused fight”.

47. “Left” or “right” group, in math : COSET
I am sure I learned about cosets in math class about 40 years ago, but I’ve long forgotten …

52. Old 58-Down capital : BONN
58. Eur. land : GER
After WWII, Bonn was chosen as the capital of West Germany, a choice promoted by Chancellor Konrad Adenauer who was from the area. After German reunification, the capital was moved to Berlin.

Ronny & the Daytonas were a surf rock group in the sixties. The band’s first recording was the single “G.T.O.”, released in 1964. Unlike the Beach Boys, the Daytonas had a little trouble reaching the higher tenor notes in the recording studio, so the sound engineers helped them out by “speeding up” their voices.

56. Jack of “The Green Berets,” 1968 : SOO
Jack Soo was a Japanese American actor noted for playing Detective Nick Yemana on the sitcom “Barney Miller” in the seventies and eighties.