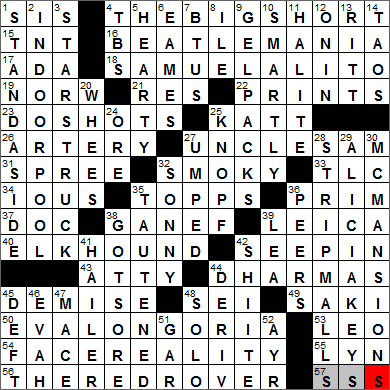 Today’s Wiki-est, Amazonian Googlies
Across
4. 2010 best seller by Michael Lewis : THE BIG SHORT
“The Big Short: Inside the Doomsday Machine” is a non-fiction book by Michael Lewis that examines the run-up to the 2007-2010 global financial crisis. In particular Lewis looks at the credit bubble of the 2000s. Lewis wrote another great book called “Moneyball” that told the story of Billy Beane and how he traded his way to success managing the Oakland Athletics baseball team.

15. Homewrecker? : TNT
TNT is an abbreviation for trinitrotoluene. Trinitrotoluene was first produced in 1863 by the German chemist Joseph Wilbrand, who developed it for use as a yellow dye. TNT is relatively difficult to detonate so it was on the market as a dye for some years before its more explosive properties were discovered.

16. Fever that reached America in the mid-1960s : BEATLEMANIA
The Beatles arrived in the US for their first tour in February 1964, arriving at John F. Kennedy Airport to a very, very warm reception. The group’s arrival was the first “action” in what came to be known as “the British Invasion”.

17. Org. fighting decay : ADA
The American Dental Association (ADA) is the largest and oldest national dental association in the world. Today the ADA is based in Chicago, but the association was founded in Niagara Falls, New York in 1859. The ADA started out as a group of 26 dentists and now has more than 152,000 members.

18. Nominee who was the subject of a 2006 filibuster attempt : SAMUEL ALITO
Associate Justice Samuel Alito was nominated to the US Supreme Court by President George W. Bush. Alito is the second Italian-American to serve on the Supreme Court (Antonin Scalia was the first). Alito studied law at Yale and while in his final year he left the country for the first time, heading to Italy to work on his thesis about the Italian legal system.

19. Major Eur. oil exporter : NORW
Norway has been ranked as the country in the world with the highest standard of living almost every year since 2001. Norway is rich in natural resources and has a relatively low population. The people benefit from a comprehensive social security system, subsidized higher education for all citizens and universal health care.

23. Toss down tequila, e.g. : DO SHOTS
Tequila is a spirit made from the blue agave. It takes its name from the city of Tequila, located about 40 miles northwest of Guadalajara.

25. Comedian/rapper Williams : KATT
Katt Williams is a comedian and rapper from Cincinnati, Ohio. Williams also works as an actor and is known for playing Money Mike in the 2002 comedy film “Friday After Next”.

27. Relative of John Bull : UNCLE SAM
The Uncle Sam personification of the United States was first used during the War of 1812. The “Uncle Sam” term was so widely accepted that even the Germans used it during WWII, choosing the code word “Samland” for “America” in intelligence communiques.

John Bull is a character used in artwork to portray the country of England, much in the way that we use Uncle Sam in the United States. Bull was created by John Arbuthnot in 1712 and is a portly man dressed in a top hat and tails, often with a Union Jack pattern on his vest (or waistcoat as the Brits would say).

35. Bazooka Joe’s company : TOPPS
Topps was a relaunch of an older company called American Leaf Tobacco, with the Topps name used from 1938. The earlier company was in trouble because it could not get supplies of its Turkish tobacco, so it moved into another chewy industry, making bubblegum.

38. Rascal, in slang : GANEF
A ganef is a thief or a scoundrel, from the Hebrew word “gannab” meaning “to steal”.

39. Shooter favored by Henri Cartier-Bresson : LEICA
As an amateur photographer, Henri Cartier-Bresson is one of my heroes. He was a French photographer who was famous for shooting candid shots, many of them just in the street. He was very simple in his use of equipment. He was one of the first professionals to accept the 35mm camera, and mainly used a “normal” 50mm lens. He only shot in black-and-white, and never bothered with developing his own prints. He focused on taking the photograph.

Leica is a German optics company, famous for production of lenses and cameras. The 1913 Leica was the first practical camera that could use 35mm film, a size chosen because it was already the standard for film used in motion pictures.

40. Large hunter with a shaggy gray coat : ELKHOUND
The Elkhound (also Norwegian Elkhound) is the national dog of Norway.

44. Virtuous behaviors, in Hinduism : DHARMAS
In the context of Buddhism, dharma can mean the collection of teachings and doctrines of the faith. The term is also used to describe proper and correct behavior that maintains the natural order of things.

49. Contemporary of O. Henry : SAKI
Hector Hugh Munro was a British writer, actually born in Burma. Munro was famous for his short stories, which he published using the pen name “Saki”. His most well-known story is “The Open Window”, which ends with the great line “Romance at short notice was her specialty”.

O. Henry was the pen name of writer William Sydney Porter from Greensboro, North Carolina. O. Henry is famous for his witty short stories that have a clever twist in the tail.

50. L’Oréal spokeswoman of the 2000s : EVA LONGORIA
Eva Longoria is a fashion model and an actress with a regular role on “Desperate Housewives”, playing Gabrielle Solis.

55. Political adviser Nofziger : LYN
Lyn Nofziger was a press secretary for Ronald Reagan when he was Governor of California. Nofziger was also a political advisor to the White House during the Nixon and Reagan administrations. One of Nofziger’s legacies is that he managed to convince President Reagan to drop the program to bring metrification to the US.

57. Lottery letters : SSS
In the event of a military draft, the Selective Service System (SSS) would hold a lottery to determine who would be called up.

The US government maintains information on all males who are potentially subject to military conscription, using what is called the Selective Service System(SS). In the event that a draft was held, men registered would be classified into groups to determine eligibility for service. Class 1-A registrants are those available for unrestricted military service. Other classes are 1-A-O (conscientious objector available for noncombatant service), 4-A (registrant who has completed military service) and 4-D (Minister of religion).

Down
4. “Sullivan & Son” airer : TBS
Turner Broadcasting System (TBS) adopted the slogan “Very Funny” in 2004. The slogan is meant to contrast TBS with its sister channel TNT, which focuses on drama shows. The TNT slogan is “Drama, Period”.

“Sullivan & Son” is a TBS comedy show that premiered in July 2012. It’s all about a corporate lawyer who gives up his job to take over the running of a Pittsburgh bar owned by his father.

6. ___ House (Los Angeles landmark of modern architecture) : EAMES
Eames House is a building in Los Angeles with a very avant-garde design that was built in 1949. It was constructed by the married design team Charles and Ray Eames who used it as their home and studio.

7. Energy qtys. : BTUS
In the world of heating, ventilation and air conditioning (HVAC), the power of a heating or cooling unit can be measured in British Thermal Units (BTUs). This dated unit is the amount of energy required to heat a pound of water so that the water’s temperature increases by one degree Fahrenheit.

11. Cubic crystals with perfect cleavage : HALITE
Halite is the mineral form of sodium chloride, and is also known as “rock salt”.

13. “Nuts” director, 1987 : RITT
Martin Ritt is best remembered as a television and movie director. During the bad old days of the “Red Scare”, Ritt was working in television until he found himself on a blacklist for supposed support of Communist causes. He turned to the theater for work until the Red Scare had run its course, and them moved into the world of film. Some of his best known movies are “The Great White Hope” and “Norma Rae”.

“Nuts” is drama movie from 1987 starring Barbra Streisand and Richard Dreyfuss. “Nuts” was also the last film actor Karl Malden appeared in before he died.

25. Publisher with a borzoi logo : KNOPF
The publishing house Alfred A. Knopf was founded in 1915 and is based in New York City. Knopf places a distinctive emblem on the title page of the books that it publishes. That emblem is a borzoi dog shown in silhouette.

The borzoi breed of dog looks like a hairy version of a greyhound. The borzoi is also known as the Russian wolfhound.

30. They stand out in the neighborhood : MCMANSIONS
Large new homes in neighborhoods that seem to be out of place are sometimes referred to as “McMansions”. Such a building can also been called a “garage Mahal” or a “Hummer house”.

41. Whom a hack watches out for : HAILER
A hackney or hackney carriage is a taxicab.

42. Follower of Ali : SHIITE
Followers of Shia Islam believe that Ali was the rightful successor to Muhammad.

47. Police supply : MACE
Mace is actually a brand name, originally introduced by Lake Erie Chemical when they started to manufacture “Chemical Mace”, with the name being a play on the club-like weapon from days of old. Mace was originally a form of tear gas, but Mace today uses a formula that is actually a pepper spray.

51. Fish with poisonous roe : GAR
The fish known as a gar is very unusual in that it is often found in very brackish water. What is interesting about gar is that their swim bladders are vascularized so that they can actually function as lungs. Many species of gar can actually be seen coming to the surface and taking a gulp of air. This adaptation makes it possible for them to live in conditions highly unsuitable for other fish that rely on their gills to get oxygen out of the water. Indeed, quite interesting …

52. Scottish port : AYR
Ayr is a port town on the Firth of Clyde in southwest Scotland. The famous poet Robert Burns was born just three miles from Ayr.