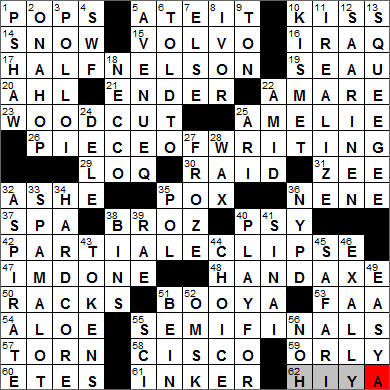 CROSSWORD SETTER: Julian Lim
THEME: Bits of Words … today’s themed answers are in the format “bit of word”, and the “bit of” each “word” is given as the clue:

Today’s Wiki-est, Amazonian Googlies
Across
10. French ___ : KISS
What we call a “French kiss” is known as a “baiser amoureux” (lover’s kiss) in France.

15. XC60, XC70 or XC90 : VOLVO
Volvo is a Swedish manufacturers of cars, trucks and construction equipment. The Volvo name was chosen as “volvo” is Latin for “I roll”.

16. “The Hurt Locker” setting : IRAQ
The 2008 movie “The Hurt Locker” is a disturbing drama about a US Army Explosive Ordnance Disposal (EOD) team on the front lines during the Iraq War. The film appears to be very realistic, and was filmed in Jordan just a few miles from the Iraqi border. The screenplay was written by Mark Boal, a journalist who was embedded with an EOD team in 2004. “The Hurt Locker” won six Academy Awards, including Best Director for Kathryn Bigelow, the first woman to be so honored.

17. SON : HALF NEL(SON)
The full nelson and half nelson are wrestling holds in which one wrestler secures an opponent by encircling the opponent’s arms under the armpits and around the neck. Some say the hold is named after Admiral Nelson, who was renowned for using encircling tactics in battle.

19. Junior of the N.F.L. : SEAU
Junior Seau is a retired NFL linebacker, first playing for the San Diego Chargers and then the Miami Dolphins and the New England Patriots.

20. U.S./Canadian sporting grp. since 1936 : AHL
The American Hockey League (AHL) is the so-called development circuit for the National Hockey League (NHL), the equivalent of the minors in professional baseball. The AHL’s playoff trophy is called the Calder Cup, which is named for Frank Calder who was the first president of the NHL.

22. To love, to Livy : AMARE
Titus Livius (aka Livy) was a Roman historian who lived from 59 BC to AD 17. Livy wrote the definitive history of Rome at that time.

23. Output from an old printer : WOODCUT
Woodcut is an old technique for creating artistic prints that has been used since the early 1400s. A woodcut is made by cutting an image into one surface of a block of wood, then inking that surface and transferring the resulting image to paper.

29. Latin abbr. meaning “he speaks” : LOQ
“Loq” is an abbreviation for the Latin “loquitur” which means “he speaks”. “Loq” is used as a stage direction.

31. #26 of 26 : ZEE
The letter named “zed” has been around since about 1400, and derives from the Greek letter zeta. The spelling and pronunciation of “zee” used in America today first popped up in the 1670s.

32. Subject of four Sports Illustrated covers between 1966 and 1993 : ASHE
Arthur Ashe was a professional tennis player from Richmond, Virginia. In his youth, Ashe found himself having to travel great distances to play against Caucasian opponents due to the segregation that still existed in his home state. He was rewarded for his dedication by being selected for the 1963 US Davis Cup team, the first African American player to be so honored. Ashe continued to run into trouble because of his ethnicity though, and in 1968 was denied entry into South Africa to play in the South African Open. In 1979 Ashe suffered a heart attack and had bypass surgery, with follow-up surgery four years later during which he contracted HIV from blood transfusions. Ashe passed away in 1993 due to complications from AIDS. Shortly afterwards, Ashe was posthumously awarded the Presidential Medal of Freedom by President Bill Clinton.

35. Chicken ___ : POX
Chickenpox is a viral infection, a classic disease of childhood most commonly caught by 4-10 year olds. There is a complication that can arise later in life as the virus sometimes reactivates to cause shingles.

36. Rare goose : NENE
The bird called a nene is a native of Hawaii, and is also known as the Hawaiian goose. The name “nene” is imitative of its call. When Captain Cook landed on the islands in 1778, there were 25,000 nene living there. By 1950, the number was reduced by hunting to just 30 birds. Conservation efforts in recent years have been somewhat successful.

37. Balneotherapy locale : SPA
Balneotherapy is similar to hydrotherapy and is the treatment of a disease using baths. Mineral baths and water massages would be considered part of balneotherapy.

38. Tito’s surname : BROZ
Marshal Josip Broz Tito led the Yugoslav resistance during WWII, and after the war led the country as Prime Minister and then President.

40. Rapper behind the 2012 “Gangnam Style” YouTube sensation : PSY
PSY is the stage name of South Korean rapper Park Jae-sang. PSY became an international star when his 2102 music video “Gangnam Style” went viral on YouTube. That video had over 1 billion views on YouTube in about six months, making it the most viewed YouTube video clip of all time. I am not one of the one million …

48. Stone Age artifact : HAND AXE
Ancient societies can be classified by the “three-age system”, which depends on the prevalence of materials used to make tools. The three ages are:

50. Oenophile’s installation : RACKS
In Greek mythology, Oeno was the goddess of wine, giving us “oen-” as a prefix meaning “wine”. For example, oenology is the study of wine and an oenophile is a wine-lover.

53. Transportation Dept. agency : FAA
The Federal Aviation Administration (FAA) was set up in 1958 (as the Federal Aviation Agency). The agency was established at that particular time largely in response to an increasing number of midair collisions. The worst of these disasters had taken place two years earlier over the Grand Canyon, a crash between two commercial passenger airplanes that resulted in 128 fatalities.

58. ___ Systems (computer networking company) : CISCO
Cisco is a company that I really admire. Headquartered in San Jose, California, Cisco develops and sells products and services in the communications sector. The name “Cisco” was taken from the name of the city San Francisco.

59. Aéroport d’___ : ORLY
Orly is on the outskirts of Paris, to the south of the city. It is home of course to the Paris-Orly Airport, the second busiest international airport for the city after the more recently built Charles de Gaulle Airport. That said, Orly is home to more domestic flights than Charles de Gaulle.

60. Quarters in Québec? : ETES
I think the idea is that “été”, the French for “summer”, takes up one quarter of a year.

Down
3. Hoi ___ : POLLOI
“Hoi polloi” is a Greek term, literally meaning “the majority, the many”. In English it has come to mean “the masses” and is often used in a derogatory sense.

5. Hit Broadway musical with the song “I’m Not Wearing Underwear Today” : AVENUE Q
“Avenue Q” is a musical inspired by “Sesame Street”, with puppets being used for all the characters on the stage. It’s an adult-oriented production, but a parody on the children’s show. Some of the characters are clearly knock-offs of “Sesame Street” favorites e.g. Rod and Nicky (Bert and Ernie) and Trekkie Monster (Cookie Monster).

8. “The Dancing Years” composer Novello : IVOR
Ivor Novello was one of the most popular entertainers in Britain in the early 20th century. Novello was a Welsh composer, singer and actor. On top of his success on the stage and in front of the camera, he even wrote the dialogue for the 1932 movie “Tarzan the Ape Man” starring Johnny Weissmuller.

10. What’s in the stars : KISMET
Kismet is a Turkish word, meaning fate or fortune, one’s lot.

12. Designer of the Tulip chair : SAARINEN
Eero Saarinen was a Finnish American architect, renowned in this country for his unique designs for public buildings such as Gateway Arch in St. Louis, Dulles International Airport Terminal, and the TWA building at JFK.

The Tulip chair was designed by Finnish American architect Eero Saarinen in the mid-fifties. The sleek plastic design is now considered a classic. The most famous use of the Tulip chair in the sixties was on the bridge of the Starship Enterprise in the TV series “Star Trek”.

13. Tool with a blade : SQUEEGEE
The first squeegee was known as a “squilgee”, and was used to wash fish blood and scales off the decks of fishing vessels.

18. Clark Bar company : NECCO
Necco Wafers are the best known product line of the candy manufacturer called the New England Confectionery Company. The firm’s name is abbreviated to NECCO, an acronym that became synonymous with the wafers.

24. Edit out : DELE
“Dele” is the editorial instruction to delete something from a document, and is often written in red.

32. Say “hey,” say : ASPIRATE
“To aspirate” is to pronounce a letter or word with an initial release of the breath, as in the word “hey”.

33. Tony winner after 5-Down : SPAMALOT
The hit musical “Spamalot” is a show derived from the 1974 movie “Monty Python and the Holy Grail”. In typical Monty Python style, the action starts just before the curtain goes up with an announcement recorded by the great John Cleese:

36. Org. in 1997’s “Cop Land” : NYPD
“Cop Land” is a 1997 police drama starring Sylvester Stallone. The movie is set in New Jersey, in a town just across the Hudson River from New York City. The cast of “Cop Land” includes several actors in supporting roles who would later star in the great HBO TV drama “The Sopranos”. Included are Edie Falco, Tony Sirico, John Ventimiglia and Frank Vincent.

39. Singer Carly ___ Jepsen : RAE
Carly Rae Jepsen is a singer/songwriter from Mission, British Columbia. Jepsen got her start on TV’s “Canadian Idol” when she placed third in the show’s fifth season.

41. Area of decades-long conflict : SINAI
The Sinai Peninsula is in the eastern part of Egypt, the triangular peninsula bounded by the Mediterranean to the north and the Red Sea to the south. It is the only part of Egypt that lies in Asia as opposed to Africa. The eastern land border of the peninsula is shared with Israel, and Israel occupied the Sinai during the 1956 Suez Crisis and the Six Day War of 1967.

45. Theodore Roosevelt was on one in 1909 : SAFARI
President Theodore Roosevelt left office in March 1909, and a few days later headed off on an African safari. If you’d like a firsthand account of Roosevelt’s adventures on the trip, you can read “African Game Trails”

written by the President after he returned to the US.

51. Hippie celebration : BE-IN
Just before 1967’s Summer of Love in the Haight-Ashbury district of San Francisco, a Human Be-In was held in the city’s Golden Gate Park. The Be-In is described as a “happening”, a gathering triggered by a new state law banning the use of LSD. The name “Human Be-In” is a play on “humanist sit-in”.

52. City west of Novosibirsk : OMSK
Omsk is a city in southwest Siberia. It is located over 1400 miles from Moscow and was chosen as the destination for many internal exiles in the mid-1900s. Perhaps the most famous of these exiles was the author Fyodor Dostoyevsky.

56. Japanese drama : NOH
Noh is a form of musical drama in Japan that has been around since the 14th century. Many of the Noh performers are masked, allowing all the roles to be played by men, both male and female parts.