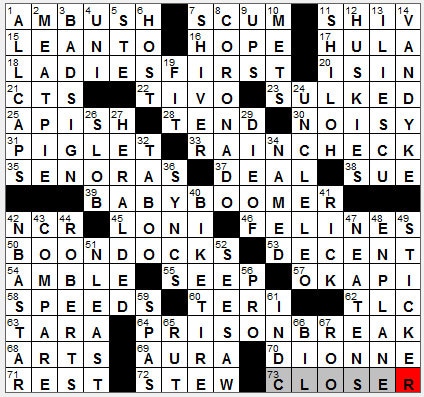 CROSSWORD SETTER: Joel Fagliano
THEME: Abbreviated Starts … all of the theme answers are well-known terms, but read differently if one reads the first two letters as abbreviations:

18A. Cackling cry from a mad scientist before unleashing havoc on southern California? : LA DIES FIRST! (ladies first)
33A. Dorm V.I.P. having to move his king? : RA IN CHECK (rain check)
39A. Proud academic achievement of football star Esiason? : BA BY BOOMER (baby boomer)
50A. Evidence of longshoremen without antiperspirant? : BO ON DOCKS (boondocks)
64A. Why the press release has to wait? : PR IS ON BREAK (prison break)

Today’s Wiki-est, Amazonian Googlies
Across
11. Pen knife? : SHIV
“Shiv” is a slang term for a weapon crudely fashioned to resemble a knife. Mostly we hear of shivs that have been fashioned by prison inmates to do harm to others.

17. ___ Bowl (former sporting event) : HULA
The annual college football game called the Hula Bowl isn’t played anymore. The inaugural game was in 1947, and the last was in 2008.

22. Show stopper? : TIVO
TiVo was introduced in 1999 and was the world’s first commercially successful DVR (Digital Video Recorder). If you don’t have a DVR, you might want to consider getting one. For those who enjoy television, it’s very liberating …

33. Dorm V.I.P. having to move his king? : RA IN CHECK (rain check)
In the game of chess, when the king is under immediate threat of capture it is said to be “in check”. If the king cannot escape from check, then the game ends in “checkmate” and the player in check loses. In the original Sanskrit game of chess, the king could actually be captured. Then a rule was introduced requiring that a warning be given if capture was imminent (today we announce “check!”) so that an accidental and early ending to the game doesn’t occur.

35. Married mujeres : SENORAS
“Mujeres” is the Spanish word for “women”.

39. Proud academic achievement of football star Esiason? : BA BY BOOMER (baby boomer)
A baby boomer is someone who was born in the post-WWII baby boom. The rate of births had been falling fairly steadily in the US at least since 1900, but this trend was sharply reversed in 1946 after WWII. The higher birth rate continued until 1964, when it returned to pre-war levels. Since then the birth rate has continued to decline, although at a slower pace. The period between 1946 and 1964 is defined as the “baby boom”.

Boomer Esiason is a retired NFL quarterback, now working as a sports commentator. Esiason has had the nickname “Boomer” since before he was born. His mother called him “Boomer” because he was constantly kicking away in her womb.

42. Big name in A.T.M.’s : NCR
NCR is an American company that has been in business since 1884, originally called the National Cash Register Company. The company has done well in a market where new technologies seem to be constantly disrupting the status quo.

45. Actress Anderson : LONI
Loni Anderson’s most remembered role was playing Jennifer Marlowe on the sitcom “WKRP in Cincinnati”. Anderson has been married four times, most famously to actor Burt Reynolds from 1988 to 1993.

50. Evidence of longshoremen without antiperspirant? : BO ON DOCKS (boondocks)
“Boondocks” is a term used in North America for a remote, usually rural area. Often the term is used derogatively, implying that a remote location is unsophisticated. “Boondocks” was first used by American soldiers stationed in the Philippines in the early 1900s. The word evolved from the Tagalog “bundok” meaning “mountain”.

57. So-called “African unicorn” : OKAPI
The okapi is closely related to the giraffe, although it does have markings on its legs and haunches that resemble those of a zebra. The okapi’s tongue is long enough to reach back and wash its eyeballs, and can go back even further to clean its ears inside and out.

60. Actress Hatcher : TERI
Teri Hatcher’s most famous role these days is as Susan Meyer in “Desperate Housewives”. I’ve never seen more than a few minutes of “Housewives” but I do know Teri Hatcher as a Bond girl, as she appeared in “Tomorrow Never Dies”.

62. “Toddlers & Tiaras” network : TLC
The cable channel known today as TLC started out life as The Learning Channel. Programming on TLC was originally focused on educational content, but today there is an emphasis on programming imported from the UK.

“Toddlers & Tiaras” is a reality TV show aired by TLC since 2008. The show is all about families who show off their daughters in child beauty pageants. Understandably I think, the show is described as controversial by many who have seen it.

63. Fictional locale five miles from Jonesboro : TARA
Rhett Butler hung out with Scarlett O’Hara at the Tara plantation in Margaret Mitchell’s “Gone with the Wind”. Tara was founded by Scarlett’s father, Irish immigrant Gerald O’Hara. Gerald named his new abode after the Hill of Tara back in his home country, the ancient seat of the High King of Ireland.

68. Dark ___ (Voldemort’s practice in the Harry Potter books) : ARTS
Voldemort is the main “bad guy” in the “Harry Potter” series of books. I heard J. K. Rowling, the author of the books, on the radio the other day and she tells us that “Voldemort” is supposed to be pronounced with a silent “t” on the end, so it sounds kind of French. But when the movies came out the actors went with the hard “t”, and that’s the pronunciation that seems to prevail now.

Down
2. Pastry in “Sweeney Todd” : MEAT PIE
“Sweeney Todd” was originally a 1936 film, and later in 1973 a play, then a 1979 musical and a movie adaptation of the musical in 2007. After Sweeney Todd has killed his victims, his partner in crime Mrs. Lovett helped him dispose of the bodies by taking the flesh and baking it into meat pies that she sold in her pie shop. Ugh!

4. Prefix with valve : UNI-
Univalves are today known as gastropods. Gastropods are more commonly called slugs and snails. The term “univalve” was used to differentiate the creatures from bivalves such as clams and mussels. Bivalves have two shells (valves) and univalves that have shells, have just the one (like a snail).

8. Early explorer of the Southwest : CORONADO
Francisco Vásquez de Coronado was a Spanish conquistador who explored part of what today is the southwest US. He was drawn by the myth of the Seven Cities of Gold, seven cities that were rumored to have great riches and luxury.

9. “Schedule a pickup” co. : UPS
United Parcel Service (UPS) is based in Sandy Springs, Georgia and has its own airline that operates out of Louisville, Kentucky.

10. 51-Down team : METS
51. 10-Down’s div. : NL EAST
The New York Mets baseball team was founded in 1962, a replacement for two teams that the city had lost, namely the Brooklyn Dodgers and the New York Giants. For several years the Mets played very poorly, finishing no better than second to last in their division. Then of course along came the “Miracle Mets” in 1969 who beat the Baltimore Orioles to claim the World Series in a huge upset.

11. Civil War battle site : SHILOH
The Battle of Shiloh was a major engagement in the Civil War, fought in 1862 at Pittsburg Landing in southwestern Tennessee. The battle started with a surprise attack by Confederate forces led by Generals Albert Sidney Johnston and P. G. T. Beauregard. The attackers gained the upper hand on the first day, over the Union forces led by Major General Ulysses S. Grant. Union reinforcements arrived during the night and the tide of the battle turned the next day and the Confederates were forced to withdraw. Almost 3,000 men died in the course of the Battle of Shiloh, making it the bloodiest battle in US history up to that point in time.

12. Big East team : HUSKIES
The UConn Huskies are the sports teams of the University of Connecticut. I wasn’t able to uncover the derivation of the “Huskies” moniker. Although it is true that “UConn” sounds like “Yukon”, that isn’t the derivation of the “Huskies” nickname as the school didn’t become the University of Connecticut (UConn) until 1939, and the Huskies name has been used since 1933.

14. Vladimir Lenin had one : VAN DYKE
The style of facial hair known as a Van Dyke is made up of a moustache and a goatee, with the cheeks fully shaven. The style takes its name from the 17th century Flemish painter Anthony van Dyck who wore such a beard, as did many of the men whose portrait he painted.

24. “Seinfeld” character with the catchphrase “Jerry! Hello!” : UNCLE LEO
On the sitcom “Seinfeld”, Jerry’s eccentric maternal uncle is Leo, played by actor Len Lesser. Lesser acted in movies and television for many years, alongside some of the greats of stage and screen. He was fond of telling a great story about acting in the marvelous 1973 film “Papillon” starring Steve McQueen and Dustin Hoffman. In his role as a prison guard Lesser was required to shove McQueen, but McQueen didn’t think that Lesser was pushing him roughly enough. He turned to Lesser and told him “Don’t think of me as a movie star. Think of me as a character in a show”, encouraging him to be more aggressive. When McQueen walked away, Hoffman was left standing there beside Lesser. He paused and quietly said to Lesser, “Think of me as a movie star …”

I love the words of one critic describing the chemistry between Bogart and Bergman in this “Casablanca” … “she paints his face with her eyes”. Wow!

42. LeBron James, e.g. : NBA STAR
LeBron James plays basketball for the Miami Heat. James seems to be in demand for the covers of magazines. He became the first African American man to adorn the front cover of “Vogue” in March 2008. That made him only the third male to make the “Vogue” cover, following Richard Gere and George Clooney.

44. Administerer of the oath of office to Obama : ROBERTS
John Roberts is the 17th Chief Justice of the United States. Roberts was a nominee of President George W. Bush and assumed office in 2005. President Bush first proposed Roberts as an Associate Justice to replace the retiring Sandra Day O’Connor. However, Chief Justice Rehnquist died before Roberts could be confirmed, so President Bush instead nominated Roberts for the vacant Chief Justice seat.

59. Places to wear robes : SPAS
The word “spa” migrated into English from Belgium, as Spa is the name of a municipality in the east of the country that is famous for its healing hot springs. The name “spa” comes from the Walloon word “espa” meaning “spring, fountain”.

66. Cartoonist Keane : BIL
“The Family Circus” comic strip is written by Bil Keane. Once Bil sketches out the text and idea for the cartoon, he sends it off to his son Jeff Keane who inks and colors the cartoon so that it is ready for publication. In the storyline itself, the main characters are based on Bil’s own family. In fact, the son “Jeffy” in the story is based on Jeff, Bil’s son and production assistant.

67. Hundred Acre Wood resident : ROO
Like most of the characters in A. A. Milne’s “Winnie the Pooh”, Roo is based on a stuffed toy belonging to Milne’s son, Christopher Robin.