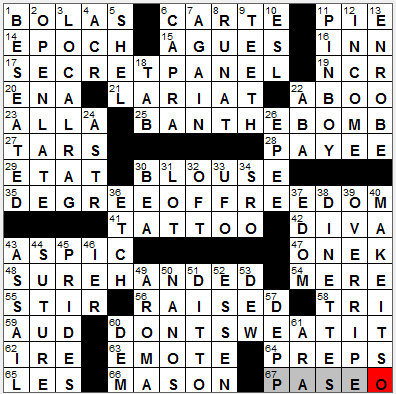 CROSSWORD SETTER: Sharon Delorme
THEME: DON’T SWEAT IT … each of the theme answers starts with a brand name of anti-perspirant:

Today’s Wiki-est, Amazonian Googlies
Across
1. Whirled weapons : BOLAS
Bolas are heavy balls connected by cords that constitute a throwing weapon. Bolas are often used to capture animals by tripping them as they run, and are usually associated with gauchos, the South American cowboys.

6. Brasserie list : CARTE
A brasserie is a kind of French restaurant that’s usually a step up from a bistro. “Brasserie” is the French word for “brewery”, and the original brasseries in France served beer that was brewed on the premises.

11. Buster Keaton missile : PIE
Buster Keaton was a comic actor, most famous for his work during the silent era. Keaton starred in and co-directed the 1926 silent comedy “The General”, lauded by many as the greatest movie of all time.

15. Malaria may cause these : AGUES
Malaria is a disease passed onto humans by mosquitoes. As a result of the disease, a parasite invades human red blood cells and multiplies causing fever and possibly coma or death. Over 750,000 people died from malaria in 2009, out of 225 million cases reported.

19. Initials seen at a checkout counter : NCR
NCR is an American company that has been in business since 1884, originally called the National Cash Register Company. The company has done well in a market where new technologies seem to be constantly disrupting the status quo.

20. Doe in a Disney film : ENA
Ena is Bambi’s aunt in the 1942 Disney film “Bambi”. The movie is based on the novel “Bambi, A Life in the Woods” written by Austrian author Felix Salten, first published in 1923.

21. One thrown from a horse? : LARIAT
Our word “lariat” comes from the Spanish “la reater” meaning “the rope”.

23. Penne ___ vodka : ALLA
Penne alla vodka is a pasta dish with a sauce made of vodka, cream , tomatoes, onions and sausage or bacon.

27. Besmirches : TARS
“Besmirch” is a derivative of “smirch”, with both words meaning to “make dirty”. In particular, to besmirch is to sully someone’s reputation.

29. State of France : ETAT
In French, a state (état) is a political division (division politique).

41. Dragon in a 2008 best seller : TATTOO
“The Girl with the Dragon Tattoo” is a sensational hit novel by the Swedish author Stieg Larsson, originally titled in Swedish as “Men Who Hate Women”. It is the first in a trilogy of successful books, all of which were only published after Larsson’s death.

42. Demanding sort : DIVA
“Diva” comes to us from Latin via Italian. “Diva” is the feminine form of “divus” meaning “divine one”. The word is used in Italy to mean “goddess” or “fine lady”, and especially is applied to the prima donna in an opera. We often use the term to describe a singer with a big ego.

56. Like Braille characters : RAISED
The Braille system of reading and writing was devised in 1825 by Louis Braille, who was himself afflicted with blindness. Braille characters are composed of six positions or dots, each arranged in two columns of three dots each. Every dot can be raised or not raised, given a total of 64 possible characters.

65. Louis Malle’s “___ Amants” : LES
“Les Amants” (“The Lovers”) is a 1958 French movie directed by Louis Malle when he was just 25 years old. The film was a great success in France but when it was first shown here in the US, a theater manager was convicted of distributing obscene material.

Down
5. Silverstein of kid-lit : SHEL
Author Shel Silverstein had a varied career and did a lot more than write books. Silverstein was a poet, composer, cartoonist and screenwriter among other things. One of his successful children’s books is “The Giving Tree”, which was first published in 1964. “The GivingTree” tells of a young boy who has a special relationship with a tree in a forest. The message of the book seems to be that the tree provides the little boy with everything he needs.

6. “State of the Union” director, 1948 : CAPRA
I can’t tell you how many of Frank Capra’s movies are on my list of all-time favorites. He directed such classics as “It Happened One Night”, “Mr. Deeds Goes to Town”, “Lost Horizon”, “Mr. Smith Goes to Washington”, “Meet John Doe”, “Arsenic and Old Lace” and the holiday favorite “It’s a Wonderful Life”. Capra also did his bit during WWII, enlisting just a few days after Pearl Harbor was attacked. Given his great talent, and the fact that he enlisted at the relatively advanced age of 44, the US Army put him to work directing 11 documentary war films in the “Why We Fight” series, for which he was awarded the Distinguished Service Medal.

“State of the Union” is a 1948 movie directed by Frank Capra starring Spencer Tracy and Katharine Hepburn. The film’s about an aircraft tycoon (Tracy) making a run for the US Presidency, with someone else (Hepburn) pulling the strings.

10. Night school subj. : ESL
English as a Second Language (ESL) is sometimes referred to as English for Speakers of Other Languages (ESOL) and English as a Foreign Language (EFL).

11. Old-time bowling alley worker : PIN BOY
Before the days of automation, there used to be a “pin boy” positioned behind the pins in a bowling alley. His job was to reposition pins that had been knocked down and to return the balls to the bowlers.

18. Q neighbor : TAB
Like most features on our computer keyboards, the tab key is a hangover from the days of typewriters. When using a typewriter, making entries into a table was very tedious as it involved lots of tapping on the spacebar and backspace key. So, a lever was added to typewriters that allowed the operator to “jump” across the page to positions that could be set by hand. Later this was simplified to a tab key, which could be depressed causing the carriage to jump to the next tab stop in much the same way that the modern tab key works on a computer.

22. Law school-sanctioning org. : ABA
The American Bar Association (ABA) was founded back in 1878 and is a voluntary association for lawyers and law students. The ABA focuses on setting academic standards for law schools and setting ethical codes for the profession.

24. Sci. major : ASTR
Astronomy is studied in a physics department at a university.

26. ___ du combat : EPEE
I think that an “épée du combat” is a real sword that can be used in combat, and an “épée de salle” (classroom sword) is a practice sword.

30. Actress Benaderet : BEA
Bea Benaderet, as well as playing Kate Bradley on “Petticoat Junction” and Pearl Bodine on “The Beverly Hillbillies”, was the voice of Betty Rubble on “The Flintstones”.

33. Amateur film subject, maybe : UFO
In 1952, the USAF revived its studies of reports of UFO sightings in a program called Project Blue Book. Project Blue Book ran from 1952 until it was shut down in 1969 with the conclusion that there was no threat to national security and that there were no sightings that could not be explained within the bounds of modern scientific knowledge.

37. Ancient land around today’s Jordan : EDOM
Edom is an ancient Iron Age kingdom located in the south of modern-day Jordan. The area is known for its red-colored sandstone, which gave the kingdom its name. The Hebrew word “Edom” translates as “red”.

40. Catchphrase of Jean-Luc Picard on “Star Trek: T.N.G.” : MAKE IT SO
When Gene Roddenberry was creating the “Star Trek” spin-off series “Star Trek: The Next Generation”, I think he chose a quite magnificent name for the new starship captain. The name “Jean-Luc Picard” is imitative of one or both of the twin-brother Swiss scientists Auguste and Jean Felix Piccard. The role of Picard was of course played by the wonderful Shakespearean actor Patrick Stewart.

45. Safari sightings : PRIDES
A group of lions is a pride of lions.

46. Suffix with bombard : -IER
A bombardier is an artillery officer, or the member of the crew on a military aircraft who drops bombs.

50. Some iPods : NANOS
The iPod Nano is the successor to the iPod Mini and was introduced to the market at the end of 2005. There have been five versions of the Nano to date and the current Nano as well as playing tunes is an FM player, records voice memos, and even has a pedometer!

51. “I’ll second that” : DITTO
“Ditto” was originally used in Italian (from Tuscan dialect) to avoid repetition of the names of months in a series of dates. Ditto is just another wonderful import from that lovely land …

52. Steel city of Germany : ESSEN
I knew a man back in Ireland, a German national from the city of Essen. He had very sad tales to tell from the days of WWII. As a young boy he lost his (socialist) parents during the Nazi purges early in the war. In 1943 he was living with his grandmother and still attending school when he was drafted into the army along with the rest of his class (at 14 years of age). His platoon leader was his school teacher who made a point of tutoring the boys in place of military drilling. One day he was on guard duty with his class/platoon at the dam above the city, and along come the Dam Busters with their bouncing bombs. The raid was successful (from the perspective of the Allies), but he described terrible famine faced by the people below the dam due to flooding of the farmland that surrounded the target factories.

Franklin Delano Roosevelt was the only child of Sara Delano and James Roosevelt Sr. The Delano family history in America goes back to the pilgrim Philippe de Lannoy, an immigrant of Flemish descent who arrived at Plymouth, Massachusetts in 1621. The family name “de Lannoy” was anglicized here in the US, to “Delano”.

61. Constellation next to Scorpius : ARA
The constellation of Ara takes its name from the Latin word for “altar”.