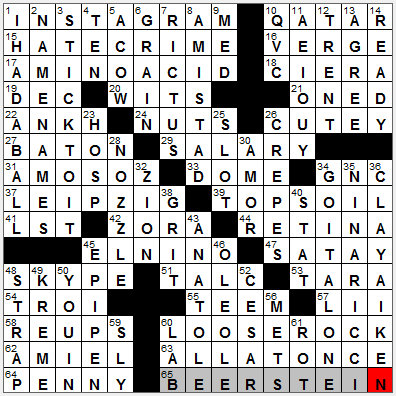 10. Site of the world’s largest single reservoir of natural gas : QATAR
Qatar is a sovereign state in the Middle East occupying the Qatar Peninsula, itself located in the Arabian Peninsula. Qatar lies on the Persian Gulf and shares one land border, with Saudi Arabia to the south. Qatar has more oil and gas reserves per capita of population than any other country in the world. In 2010, Qatar had the fastest growing economy in the world, driven by the petrochemical industry.

17. It might be essential : AMINO ACID
Amino acids are essential to life in many ways, not least of which is their use as the building blocks of proteins.

18. Old Olds : CIERA
Oldsmobile made the Cutlass Ciera from 1982 to 1996. The Ciera was the brand name’s most successful model.

22. Emblem of life : ANKH
The ankh was the ancient Egyptian hieroglyphic character for “eternal life”. The ankh wasn’t just used in inscriptions but was often fashioned into amulets and as surrounds for mirrors (perhaps symbolizing a view into another world).

27. Pit item : BATON
In the orchestra pit, the conductor usually has a baton.

31. “A Perfect Peace” novelist : AMOS OZ
Amos Oz is an Israeli writer. Oz has written 18 books in Hebrew and his work has been translated into 30 languages, including Arabic.

34. Protein powder purveyor : GNC
General Nutrition Centers (GNC) is a retailer of health and nutrition supplements based in Pittsburgh, Pennsylvania.

37. Where Wagner was born : LEIPZIG
Richard Wagner was born in the Jewish quarter of Leipzig in 1813. Decades later, Wagner became known not only for writing magnificent music, but for his antisemitic views and writings.

41. E.T.O. craft : LST
LST stands for Landing Ship, Tank. LSTs were the large vessels used mainly in WWII that had doors at either ends through which tanks and other vehicles could roll off and onto beaches. The design concept persists to this day in the huge fleet of commercial roll-on/roll-off car ferries, all inspired by the LST.

42. First name in the Harlem Renaissance : ZORA
Zora Neale Hurston was an American author, most famous for her 1937 novel “Their Eyes Were Watching God”. Like the author, the main character in the novel is an African American woman, a part played by Halle Berry in a television movie adaptation that first aired in 2005.

44. Place for rods : RETINA
“Retinae” is the plural of “retina”. The retina is the tissue that lines the inside of the eye, the tissue that is light-sensitive. There are (mainly) two types of cell in the retina that are sensitive to light, called rods and cones. Rods are cells that best function in very dim light and only provide black-and-white vision. Cones on the other hand function in brighter light and can perceive color.

45. Current event? : EL NINO
When the surface temperature of the Pacific Ocean rises or falls more that half a degree centigrade, then there is said to be an El Niño episode. That small temperature change in the Pacific has been associated with climatic changes that can stretch right across the globe. El Niño is Spanish for “the boy” and is a reference to the Christ child. The phenomenon was given this particular Spanish name because the warming is usually noticed near South America and around Christmas-time.

47. Skewered edible : SATAY
The dish known as “satay” originated in Java, Indonesia and is marinated pieces of meat served on a skewer in a sauce, often a spicy peanut sauce.

48. Make a call to see someone nowadays? : SKYPE
The main feature of the Skype application is that it allows voice communication to take place over the Internet (aka VoIP). Skype has other features such as video conferencing and instant messaging, but the application made its name from voice communication. Skype was founded by two Scandinavian entrepreneurs and the software necessary was developed by a team of engineers in Estonia. The development project was originally called “Sky peer-to-peer” that gave birth to the name “Skyper”, which had to be shortened to “Skype” because the skyper.com domain name was already in use.

51. It may be put on after a shower : TALC
Talc is a mineral, actually hydrated magnesium silicate. Talcum powder is composed of loose talc, although these days “baby powder” can also be cornstarch.

53. TV title role for Toni Collette : TARA
“United States of Tara” is a comedy-drama that aired for a couple of years on Showtime. Star of the show is the talented Australian actress Toni Collette. The character she plays is Tara, a woman suffering from multiple personality disorder.

54. Name on the Enterprise : TROI
Deanna Troi, a character on “Star Trek: The Next Generation”, is played by the lovely Marina Sirtis. Sirtis is a naturalized American citizen and has what I would call a soft American accent on the show. However, she was born in the East End of London and has a natural accent off-stage that is more like that of a true Cockney.

62. “Creation” director Jon : AMIEL
Jon Amiel is a film and television director from London, England. Amiel has a very successful career in the UK but these days spends most of his time working on projects for Hollywood. A couple of movies of his that I recognize are “Sommersby” starring Richard Gere and Jodie Foster, and “Entrapment” starring Sean Connery and Catherine Zeta-Jones.

Down
4. Knockout number, in more ways than one : TEN
In slang terms, “a ten” is a really good-looking person, a knockout. A count of ten is also required for a knockout in a boxing match.

5. Have ___ : A COW
The phrase “don’t have a cow” originated in the fifties, a variation of the older “don’t have kittens”. The concept behind the phrase is that one shouldn’t get worked up, it’s not like one is giving birth to a cow.

7. Gaping grin : RICTUS
A rictus is a gaping grimace, usually one that is unnatural, maybe even caused by a physical disorder such as tetanus.

8. 1997 Spielberg epic : AMISTAD
“Amistad” is a historical drama directed and produced by Steven Spielberg. The film tells the true story of the slave ship “La Amistad”. The newly captured slaves on board escaped and took over the ship off the coast of Cuba. The ship was then captured by a US military vessel and the slaves taken into custody. The captives were eventually freed when their case was decided in the US Supreme Court, with John Quincy Adams pleading for the imprisoned Africans.

10. “Friday Night Beauty” airer : QVC
The QVC shopping channel was founded in 1986 in West Chester, Pennsylvania. The company now has operations not only in the US but also in the UK, Germany, Japan and Italy. That means QVC is reaching 200 million households. The QVC acronym stands for Quality, Value and Convenience.

12. Council city of 1545-63 : TRENT
Trento is a city in northern Italy, famous as the host of the 16th century Council of Trent held by the Roman Catholic Church. This Ecumenical Council meeting was held largely in response to the growing Protestant Reformation. It was the decisions made at the Council of Trent that led to the Counter-Reformation, the revival of the Catholic church over the following 100 years.

36. Singer with the double-platinum album “Measure of a Man” : CLAY AIKEN
Clay Aiken is one of the singing stars discovered in “American Idol”. Aiken had filled out an application to appear on the show “Amazing Race”, but a friend persuaded him to try out for “American Idol” instead.

43. France, for one : ANATOLE
Anatole France was the pen name for French poet and novelist François-Anatole Thibault. France won the Nobel Prize for Literature in 1921.

45. Shot of adrenaline? : EPIPEN
EpiPen is a brand name of epinephrine auto-injector. An EpiPen delivers a measured dose of epinephrine, usually for the treatment of an allergic reaction.

46. Encouraging words : OLE OLE!
“Ole Ole Ole!” is chanted at soccer games by many Spanish-speaking (or -shouting!) fans. I am very proud to claim that the fans of the Irish national team have adopted the chant as their own, and it can be heard practically non-stop when Ireland is playing (with some inventive melody behind it!).

52. Annual cinéma prize : CESAR
The César Award is the national film award of France. The first César was awarded in 1975, named after the French sculptor César Baldaccini. The awards themselves are reproductions of an actual Baldaccini sculpture.

56. “Meet the ___” (major-league fight song) : METS
“Meet the Mets” is the fight song of the New York Mets baseball team. The song was first heard in 1962 when the brand new Mets team played its first game in New York City.

60. Chocolate ___ : LAB
The Labrador breed of dog has been around at least since 1814, and the chocolate Labrador appeared over a century later in the 1930s.