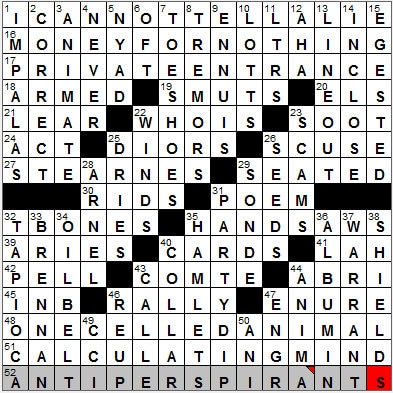 Today’s Wiki-est, Amazonian Googlies
Across
1. Straight person’s statement : I CANNOT TELL A LIE
The famous story about George Washington cutting down a cherry tree as a child has been shown to be fiction. He supposedly was confronted by his father after taking an axe to a tree and confessed with the words, “I’m sorry father, I cannot tell a lie”.

Dire Straits was a rock band from Newcastle in the north of England. The group had many hits, but my favorite is the wonderful “Sultans of Swing”, closely followed by “Walk of Life”.

19. Jan ___, South African leader instrumental in establishing the League of Nations : SMUTS
Jan Smuts first came to power as Prime Minister of South Africa in 1919. Long before the official policies of apartheid were in place, he set up structures designed to segregate the black and white populations.

20. South African with two U.S. Open wins : ELS
Ernie Els is a South African golfer. Els a big guy but he has an easy fluid golf swing that has earned him the nickname “The Big Easy”. He has a child who suffers from autism and so Els has been very effective in raising money for charities that focus on the condition.

21. King with a sad end : LEAR
Shakespeare was inspired to write his famous drama “King Lear” by the legend of “Leir of Britain”, the story of a mythological Celtic king.

25. Some gowns : DIORS
Christian Dior was a French fashion designer. As WWII approached, Dior was called up by the French military, drawing a temporary halt to his career in fashion. He left the army in 1942 and for the duration of the war designed clothes for wives of Nazi officers and French collaborators. After the war his designs became so popular that he helped re-establish Paris as the fashion center of the world.

32. Some dog treats : T-BONES
The T-bone and porterhouse are related cuts of meat, with the latter being a larger version of the former (I think … I don’t eat meat!).

39. Many a spring arrival : ARIES
Aries is the first astrological sign in the Zodiac, and is named after the constellation. Your birth sign is Aries if you were born between March 21 and April 20, but if you are an Aries you would know that!

42. Big name in educational grants : PELL
Pell Grants are awarded by the federal government to students in financial need so that they can attend college. The grant is named for Senator Claiborne Pell, who sponsored the bill that introduced aid for students.

43. Earl’s equivalent, in Évreux : COMTE
“Comte” is the French word for “count”, as in “The Count of Monte Cristo” by Alexander Dumas.

Évreux is in the north of France, in Upper Normandy.

44. Shelter-providing dugout : ABRI
An abri is a shelter or place to hide, especially in wartime. “Abri” is a term we borrow from French.

45. Like Brahms’s Piano Trio No. 1 : IN B
Johannes Brahms was a leading German composer from the Romantic period. Brahms is one of the “Three Bs”, often grouped with Johann Sebastian Bach and Ludwig van Beethoven.

52. Sure things : ANTIPERSPIRANTS
Sure is a brand of antiperspirant that is sold in the UK and Ireland. Sure is sold under the brand name Degree in the US.

Down
1. Savanna leapers : IMPALAS
“Impala” is the Zulu word for “gazelle”.

A savanna (also savannah) is a grassland. If there are any trees in a savanna, by definition they are small and widely spaced so that light can get to the grasses allowing them to grow unhindered.

5. Diana with a record-setting swim around Manhattan in 1975 : NYAD
Diana Nyad is a long-distance swimmer. Nyad holds the distance record for a non-stop swim without a wet-suit, a record that she set in 1979 by swimming from Bimini to Florida. In 1975 she became the fastest person to circle Manhattan in a swim that lasted 7 hours 57 minutes.

7. They allow performers to stay on pointe : TOE SHOES
“Pointe” is the name given to ballet dancing on the tips of the toes, and is a French term. A ballerina wears “pointe shoes” to perform this delightful, albeit unhealthy, feat … pun intended …

9. Afflictions of the world-weary : ENNUIS
“Ennui” is the French word for boredom, a word that we now use in English. It’s one of the few French words we’ve imported that we haven’t anglicized and actually pronounce “correctly”.

10. Former Senate majority leader and family : LOTTS
Trent Lott was raised Democrat in Mississippi, but served in Congress as a Republican. Lott ran into trouble for remarks he made that were interpreted as being racially motivated, and ended up resigning in 2007.

13. Certain audio jack : LINE OUT
The audio jack marked “line out” is a similar to the jack marked “audio out”. The difference is that volume can be controlled for the sound leaving the audio out jack, whereas the line out jack has a signal at a constant level of volume.

23. Rackets : SCAMS
The slang term “scam” meaning a swindle may come from the British slang “scamp”.

25. Exsiccates : DRIES
To exsiccate is to dry up, or cause something to dry up.

28. Cellulose fiber brand : ARNEL
Arnel is a brand name of an acetate textile.

29. Meteorological probe : SONDE
A sonde is a probe that is sent into the upper atmosphere to make physical observations. “Sonde” is the French word for “sound”, so the idea is that one is “sounding” the atmosphere.

32. Option for thickening soup : TAPIOCA
The cassava plant is a woody shrub native to South America grown largely for its carbohydrate-rich tubers. In fact, the cassava is the third largest food source of carbohydrates (for humans) in the world. Ordinarily, that carbohydrate is extracted from the plant, dried as flour and is called tapioca.

David Souter was an Associate Justice of the US Supreme Court. Souter was appointed in 1990 by President George H. W. Bush, even though over time Justice Souter tended to vote with the more liberal members of the court.

34. It’s exploited for its crude content : OIL BELT
I think that an “oil belt” is a belt of land below which there are oil reserves being exploited.

35. Tiny dots on maps : HAMLETS
A hamlet is a small village, especially one without a church apparently.

San José is a capital of the Central American country of Costa Rica.

The emperor Nero had quite the family life. When Nero was just 16-years-old he married his stepsister, Claudia Octavia. He also had his mother and stepbrother executed.