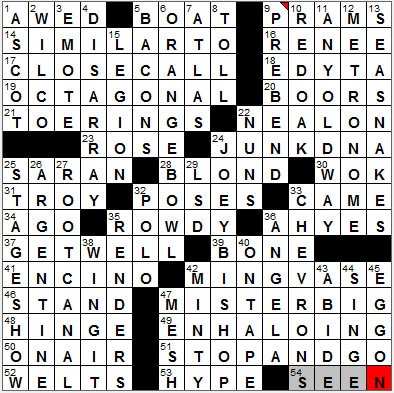 Today’s Wiki-est, Amazonian Googlies
Across
5. Loophole-exploiting casino site, say : BOAT
One way that a casino owner can circumvent local regulation and prohibition of gambling is to locate the casino on a boat. This is particularly true for larger ships that sail outside of a country’s territorial waters before opening up the on-board casino for business. I think that some riverboat casino’s might be exploiting loopholes in regulations as well, but I could be wrong …

9. London carriages : PRAMS
Another word used in the UK that’s rarely used over here is “pram”, which in my day was the most common term for what is called a baby carriage in the US. “Pram” is short for “perambulator”.

18. Sliwinska of “Dancing With the Stars” : EDYTA
Edyta Śliwińska is a Polish ballroom dancer who made a name for herself as one of the professionals on TV’s “Dancing with the Stars”. Śliwińska decided to leave the show after ten seasons in order to finish her education and start a family.

21. What married women in India traditionally wear : TOE RINGS
Toe rings are worn in India by women as a symbol of marriage. A married Indian woman usually wears a pair of toe rings, one on the second toe of each foot.

22. “Weekend Update” anchor between Miller and Macdonald : NEALON
Off screen, Kevin Nealon is friends with fellow “Saturday Night Live” alumna Dana Carvey. When Carvey landed a spot on SNL, he recommended Nealon to the show’s producers and both stand-up comedians joined the cast in the same year, 1986.

24. Worthless inheritance? : JUNK DNA
DNA provides the code necessary for sequencing amino acids into protein molecules. There is some DNA however that isn’t used in sequencing amino acids, and this is known as noncoding DNA. This noncoding DNA picked up the moniker “junk DNA” as the initial perception was that it had no purpose at all. It turns out that at least some noncoding DNA does indeed have biological function, so the junk DNA name is probably undeserved.

25. Dish cover, possibly : SARAN
What’s known as plastic wrap in America, we call cling-film in Ireland. Plastic wrap was one of those unintended inventions, a byproduct of a development program to create a hard plastic cover for cars.

30. Oriental vessel : WOK
“Wok” is a Cantonese word, the name of the frying pan now used in many Asian cuisines.

35. Hard to control : ROWDY
“Rowdy” is an American English term, with a “rowdy” originally being a lawless backwoodsman. The term probably derives from our word “row”.

41. San Fernando Valley city : ENCINO
Encino is a district in the City of Los Angeles on the north slope of the Santa Monica Mountains. The area takes its name from a historic parcel of land called Rancho Los Encinos (Ranch of the Evergreens).

42. Oriental vessel : MING VASE
The Ming Dynasty lasted in China from 1368 to 1644. The Ming Dynasty oversaw tremendous innovation in so many areas, including the manufacture of ceramics. Late in the Ming period, a shift towards a market economy in China led to the export of porcelain on an unprecedented scale, perhaps explaining why we tend to hear more about Ming vases than we do about porcelain from any other Chinese dynasty.

47. Head honcho : MISTER BIG
Honcho is a slang term for a leader or manager. The term comes to us from Japanese, where a “hancho” is a squad (han) leader (cho).

Down
1. Beau Brummell’s accessory : ASCOT
An Ascot tie is that horrible-looking (I think!) wide tie that narrows at the neck, which these days is only really worn at weddings. The tie takes its name from the Royal Ascot horse race at which punters still turn up in formal wear at Ascot Racecourse in England.

Beau Brummell was a friend of the future King George IV of England, and established himself as the arbiter of men’s fashions at the time. He claimed that it took him five hours to get dressed properly, and that he had his boots polished with champagne. It was Brummell who popularized the fashion of wearing a fitted jacket and pants with a knotted cravat. So, we guys have Brummell to thank/blame for us having to wear business suits with ties.

2. Radio reply : WILCO
In the world of radio telephony, “wilco” is short for “I understand and will comply”.

5. ___ Rebellion (1676 Jamestown uprising) : BACON’S
Nathaniel Bacon led an uprising in 1676 in the Virginia Colony. The uprising was remarkable in that poor whites and blacks united in opposition to the ruling class. The rebels were trying to drive Native Americans from Virginia.

6. Game played since 1935 : ORANGE BOWL
The Orange Bowl is an annual college football game played in Miami Gardens, Florida. The Rose Bowl is the oldest of the bowl games, but the Sun Bowl, Sugar Bowl and Orange Bowl come in second. The first Orange Bowl was played on New Year’s Day 1935. To be fair to the sponsors, the full name today is the Discover Orange Bowl …

7. One presenting the earth as flat? : ATLAS
We call a book of maps an “atlas” after a collection of maps published by the famous Flemish geographer Gerhadus Mercator. Mercator’s collection contained a frontispiece with an image of Atlas the Titan from Greek mythology holding up the world on his shoulders. That image gave us our term “atlas”.

12. Time keeper : METRONOME
A metronome is any device that produces a regular beat. The metronome was invented in 1815 by Johann Maelzel, who intended it to be an instrument for the use of musicians.

13. Eel lookalikes : SEA SNAKES
I used to live in the Philippines and spent almost every weekend SCUBA diving. Occasionally, I’d come across a sea snake slithering through the water. The rule was always to never swim “above” sea snakes as they don’t have gills and have to come to the surface to breathe. You don’t want to be in the way of a sea snake when it’s coming up for a breath of air, as all sea snakes are venomous and many fatalities have been recorded from their bites.

24. Longest-living member of the Rat Pack : JOEY BISHOP
Joey Bishop was the stage name of entertainer Joseph Gottlieb from the Bronx, New York. Bishop was mainly a comedian, and was perhaps better known as a member of the famous Rat Pack, alongside Frank Sinatra, Peter Lawford, Sammy Davis, Jr. and Dean Martin. Bishop died in 2007, the last surviving member and the longest-lived “Rat”.

26. Resident of the largest Spanish-speaking nation : ARGENTINE
Argentina is the second largest country in South America (after Brazil), and geographically is the world’s largest Spanish-speaking nation. The name “Argentina” of course comes from the Latin “argentum”, the word for “silver”. It is thought that the name was given by the early Spanish and Portuguese conquerors who also named the Rio de la Plata (the “Silver River”). Those early explorers got hold of lots of silver objects that they found among the native population.

29. Hits from the 1960s? : LSD
LSD (also known as “acid”) is short for lysergic acid diethylamide. A Swiss chemist called Albert Hofmann first synthesized LSD in 1938 in a research project looking for medically efficacious ergot alkaloids. It wasn’t until some five years later when Hofmann ingested some of the drug accidentally that its psychedelic properties were discovered. Trippy, man …

32. Sport that requires helmets : POLO
The game of polo originated in Iran, possibly before the 5th century BC. Polo was used back them primarily as a training exercise for cavalry units.

33. Bands with bends : CHEVRONS
A chevron is a band that is shaped like an inverted “V”. One example of a chevron is the insignia that indicates rank on a military uniform.

36. Merkel of German politics : ANGELA
The formidable politician Angela Merkel is the current Chancellor of Germany, the country’s head of state. Merkel is the first female German Chancellor and when she chaired the G8 in 2007 she became only the second woman to do so, after the UK’s Margaret Thatcher. Merkel grew up in East Germany under Communist rule.