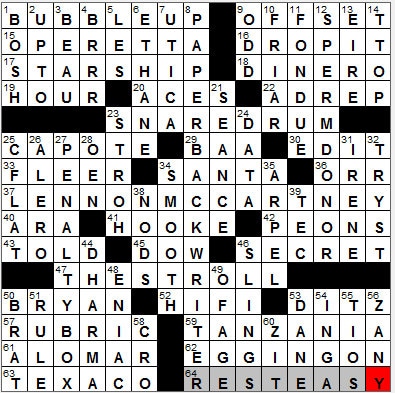 Today’s Wiki-est, Amazonian Googlies
Across
18. Bread : DINERO
Dinero is the Spanish word for money, as well as a slang term for money here in the US.

23. Backbeat keeper : SNARE DRUM
Snare drums are so called because they have a set of wire strands (called snares) stretched across the bottom surface of the drum. When the drum is struck, the snares vibrate against the bottom drumhead producing a unique sound.

25. Early idol of Warhol : CAPOTE
Truman Capote wrote a very successful novel called “Other Voices, Other Rooms” that was published in 1947. Harold Halma took a famous photograph of Capote that was used to publicize “Other Voices, Other Rooms”, a picture with the young author reclined on a sofa and staring into the camera. Andy Warhol saw this image and was greatly impressed, and as a result wrote many fan letters to Capote.

33. Former big player in trading cards : FLEER
The Fleer Corporation was founded in 1885 and was the first company to successfully manufacture bubblegum (how I wish they hadn’t!).

36. Skater with many trophies : ORR
Bobby Orr is regarded as one of the greatest hockey players who ever played the game. By the time he retired in 1978, Orr had undergone over a dozen knee surgeries. At 31 years of age, Orr concluded that he just couldn’t skate anymore. Reportedly, he was even having trouble walking …

37. Names on some Apple products : LENNON-MCCARTNEY
John Lennon and Paul McCartney made an agreement before they became famous that they would always give joint credit for their songs. In the early days, the duo wrote their songs together, working alongside each other. Soon they would write songs individually, with one giving the other limited input. Regardless, the Lennon-McCartney attribution was used for all the songs they wrote either individually or together right up to 1974. The partnership was officially dissolved in December 1974, in the Polynesian Resort in Walt Disney World, Florida. There John Lennon put his signature to official documents couriered to him by Apple’s lawyers (Apple being the Beatles record label).

40. One of Ptolemy’s 48 constellations : ARA
The constellation of Ara takes its name from the Latin word for “altar”.

41. English philosopher Robert : HOOKE
Robert Hooke was an Englishman, very much an expert in a number of disciplines ranging from science and architecture to philosophy. Hooke spent part of his working life as assistant to the 17th century scientist Robert Boyle.

42. Grunts : PEONS
A peon is a lowly worker with no real control over his/her working conditions. The word comes into English from Spanish where it has the same meaning.

45. Average name : DOW
Dow Jones & Company was founded as a publishing house in 1882 by three newspaper reporters, Charles Dow, Edward Jones and Charles Bergstresser. Today, the company’s most famous publication has to be “The Wall Street Journal”. In 1884, Charles Dow started reporting the average dollar value of the stock of eleven companies, an index which spawned a whole host of metrics that carry the Dow Jones name to this day, including the renowned Dow Jones Industrials.

47. 1950s “American Bandstand” dance : THE STROLL
“The Stroll” was both a song and a dance in the late fifties. “The Stroll” is a slow dance in a rock ‘n’ roll style. In the dance, men and women line up opposite each other, and then each couple processes down between the two lines, making their own unique moves.

50. Grammy winner Adams : BRYAN
Bryan Adams is a Canadian singer-songwriter. Adams is also a very accomplished photographer and his images have been widely published.

52. 1950s living room feature : HI-FI
Hi-fi systems were introduced in the late forties, audio equipment designed to give a much higher quality reproduction of sound than cheaper systems available up to that point. “Hi-fi” of course stands for “high fidelity”.

57. Document heading : RUBRIC
In Medieval illuminated manuscripts, sections of text that are highlighted in red ink are known as rubrics. Often a rubric would be seen at the top of a page, and we tend to use the term “rubric” for a title or a name. “Rubric” comes from the Latin “rubrica”, the red ocher used in making the red pigment used in ink.

59. Jane Goodall study site : TANZANIA
Jane Goodall is a British anthropologist, famous for studying wild chimpanzees in Africa for 45 years. Working at Gombe Stream National Park in Tanzania, Goodall made many discoveries. She was the first to see chimps constructing and using tools, an activity thought to be limited to the human species. She also found out that chimpanzees are vegetarians.

63. Fire Chief supplier : TEXACO
Texaco used to make a brand of gasoline they called “Fire Chief”. Fire Chief was dispensed from red pumps and was marketed as “suitable for fire trucks”.

Down
1. Baloney : BOSH
Our word “bosh” meaning nonsense came into English via a well-defined route. It was first used in the novel “Ayesha, the Maid of Kars” written by J. J. Morier in 1905, and is a Turkish word that literally translates as “empty”.

3. Certain squeeze : BEAU
“Beau” is the French word for “beautiful”, in the male sense.

6. Crude component : ETHANE
The main component in natural gas is methane, with the second most voluminous constituent being ethane. Both methane and ethane are combustible, and so traditionally the methane and ethane were burned together to generate heat. However, since the sixties, ethane has been used as a valuable starter material for the production of ethylene, itself a raw material for polyethylene and other plastics. So, these days the ethane is extracted at a refinery before the natural gas is bottled as a fuel.

7. The Pioneers of the N.C.A.A. : UTICA
Utica College is a private school in Utica, New York. The school started out in the thirties as part of Syracuse University and became an independent institution in 1995.

8. Part of 37-Across’s output : PAPERBACK WRITER
“Paperback Writer” is a Beatles hit from 1966. Apparently Paul McCartney wrote the song after his aunt requested him to come up with a song that wasn’t about love. Soon after, McCartney noticed Ringo Starr reading a book, and so “Paperback Writer” was born.

10. Romeo’s adviser, for one : FRIAR
In William Shakespeare’s play “Romeo and Juliet”, Romeo’s confidant is a character called Friar Laurence, a Franciscan monk.

13. Name on some European stamps : EIRE
“Éire”, is the Irish word for “Ireland”. Erin is an anglicized version of “Éire”, actually corresponding to “Éirinn”, the dative case of “Éire”.

14. Datsun 280ZX option : T-TOP
A T-top is a car roof that has removable panels on either side of a rigid bar that runs down the center of the vehicle, above the driver.

21. Attempt to reach a post-departure plane? : SEANCE
“Séance” is a French word meaning “a sitting”.

23. Brewer Bernhard : STROH
Bernard Stroh was the son of a German brewer. He immigrated to the US in 1848, and set up his own brewery in 1850, in Detroit. Years later, the Stroh Brewing Company introduced a European process called fire-brewing. This results in higher temperatures at a crucial stage in the brewing process, supposedly bringing out flavor. Stroh’s is the only American beer that still uses this process. However, over the long term, the company did not do well, and it was acquired by Pabst in 1999. You can still buy beer that has Stroh’s on the label though.

28. Vintner’s prefix : OEN-
In Greek mythology Oeno was the goddess of wine, giving us “oen-” as a prefix meaning “wine”. For example, oenology is the study of wine and an oenophile is a wine-lover.

31. Samuel Johnson’s only play : IRENE
Samuel Johnson (also known as Dr. Johnson) was a British author active in the 1700s. Johnson is famous for producing a “Dictionary of the English Language” published in 1755. Johnson’s dictionary was the standard used until the OED was published 150 years later. As a creative writer, Johnson wrote one play, called “Irene”, a work that he believed to have been his worse, and the critics apparently agreed.

32. Amorous arrangement : TRYST
In its most general sense, a tryst is a meeting at an agreed time and place. More usually we consider a tryst to be a prearranged meeting between lovers. The term comes from the Old French “triste”, a waiting place designated when hunting.

35. Last name in skin care : ARPEL
The Adrien Arpel cosmetic company was founded in 1962 and sold its products across Europe. The company started selling in the US in 1968.

44. Concept in Hinduism and Buddhism : DHARMA
In the context of Buddhism, dharma is the collection of teachings and doctrines of the faith.

48. Six women at Penn programmed it : ENIAC
The acronym ENIAC stands for Electronic Numerical Integrator and Calculator (although many folks insist that the C was for “Computer”). ENIAC was the first general-purpose electronic computer. It was designed to calculate artillery firing tables, but it ended up being used early on to make calculations necessary for the development of the hydrogen bomb. Given its uses, it’s not surprising to hear that development of ENIAC was funded by the US Army during WWII.

54. “Roll in ze hay” enthusiast in “Young Frankenstein” : INGA
I am not really a big fan of movies by Mel Brooks, but “Young Frankenstein” is the exception. I think the cast has a lot to do with me liking the film, as it includes Gene Wilder (Dr. Frankenstein), Teri Garr (Inga), Marty Feldman (Igor) and Gene Hackman (Harold, the blind man).

58. Balkan land, in the Olympics : CRO
The Republic of Croatia is a Balkan country. The Croats declared independence from Yugoslavia in 1991.