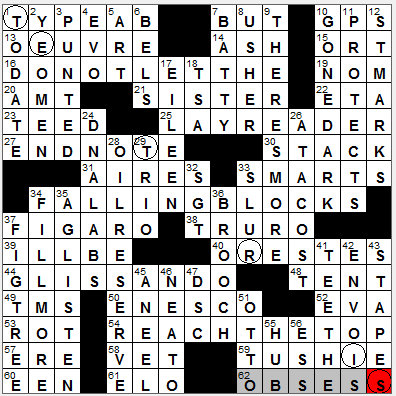 CROSSWORD SETTER: Caleb Rasmussen
THEME: TETRIS … the circled squares when read left-to-right spell out TETRIS and the black squares in today’s grid are all shapes used in the classic video game, and we also have a basic instruction for playing the game in three theme answers:

Today’s Wiki-est, Amazonian Googlies
Across
1. Category at some banks : TYPE AB
The most important grouping of blood types is the ABO system. Blood is classified as either A, B, AB or O, depending on the type of antigens on the surface of the red blood cells. A secondary designation of blood is the Rh factor, in which other antigens are labelled as either positive or negative. When a patient receives a blood transfusion, ideally the donor blood should be the same type as that of the recipient, as incompatible blood cells can be rejected. However, blood type O-neg can be accepted by recipients with all blood types, A, B, AB or O, and positive or negative. Hence someone with O-neg blood type is called a “universal donor”.

10. Car rental add-on : GPS
GPS stands for Global Positioning System. The modern GPS system that we use today was built by the US military who received the massive funding needed because of fears during the Cold War of the use of Intercontinental Ballistic Missiles. We civilians, all round the world, owe a lot to President Ronald Reagan because he directed the military to make GPS technology available to the public for the common good. President Reagan was moved to do so after the Soviet Union shot down KAL flight 007 carrying 269 people, just because the plane strayed accidentally into Soviet airspace.

13. Everything Bach composed, e.g. : OEUVRE
The sum of an artist’s work in his or her lifetime is known as his or her “oeuvre”.

Like so many of the great composers, the extent of Bach’s contribution to the repertoire wasn’t fully recognized until long after his passing. I think that Johann Sebastian Bach was certainly the greatest composer of the Baroque period, and is ranked by many as the greatest classical composer of all time. Bach died when he was 65-years-old, in 1750. He was buried in Old St. John’s Cemetery in Leipzig, and his grave went unmarked until 1894. At that time his coffin was located, removed and buried in a vault within the church. The church was destroyed in an Allied bombing raid during WWII, and so after the war the remains had to be recovered and taken to the Church of St. Thomas in Leipzig.

16. With 34- and 54-Across, basic instruction for [circled letters] : DO NOT LET THE
34. See 16-Across : FALLING BLOCKS
54. See 16-Across : REACH THE TOP
Tetris is a very addictive video game, developed in the Soviet Union in 1984. The name Tetris comes from a melding of the prefix “tetra-” (as all the game pieces have four segments) and “tennis” (a favorite sport played by the developer). Since 2005 there have been more than 100 million copies of the game installed on cell phones alone.

31. Buenos ___ : AIRES
Buenos Aires is the capital of Argentina, located on the estuary of the Ria de la Plata. As a port city, the people of Buenos Aires are known as porteños (“people of the port”).

Figaro is the central character in at least two operas: “The Barber of Seville” by Rossini, and “The Marriage of Figaro” by Mozart. The two storylines are based on plays by Pierre Beaumarchais, with one basically being a sequel to the other.

38. Town on Cape Cod : TRURO
Truro is a town in the Outer Cape, close to the northern tip of Cape Cod in Massachusetts. The area was settled in the late 1600s by English colonists who named it for the city of Truro in Cornwall, England.

40. Brother of Electra : ORESTES
Orestes is a character appearing in Greek mythology, and is the subject of several Ancient Greek plays. In a story by Homer, Orestes kills his mother Clytemnestra. He does so in revenge as Clytemnestra had killed Agamemnon, who was her husband and father to Orestes. Agamemnon was killed by his wife for sacrificing his daughter Iphigenia in order to get favorable winds on a sea voyage. Heavy stuff …

44. Musical effect that’s simple for a trombone : GLISSANDO
In music, a glissando (the plural of which is “glissandi”), is a “glide” from one pitch to another, a rapid “slide” through a series of consecutive notes. On a piano this can be accomplished by swiping a finger across the keys, and on a harp the effect is achieved with a similar action across the strings.

52. Señora Perón : EVA
Nowadays, President Juan Perón of Argentina is perhaps less well-known than his second wife, Eva Perón of “Evita” fame. Juan and Eva Perón were overthrown in a military coup in 1955, although Juan Perón was returned to power in 1973 when he served for only nine months before he passed away. Juan was succeeded in office by his third wife, Isabel Perón.

53. Malarkey : ROT
It’s not really known how the word “malarkey” came to mean “lies and exaggeration”, although “Malarkey” is also used as a family name.

59. Bottom : TUSHIE
“Tush” is a slang term for the backside, an abbreviation of “tochus” that comes from the Yiddish “tokhes”.

61. “Evil Woman” grp. : ELO
The Electric Light Orchestra (ELO) is a symphonic rock group from the north of England. The band’s manager was Don Arden, father of Sharon Osbourne (wife of Ozzy).

4. Bolivian president Morales : EVO
Evo Morales has been President of Bolivia since 2006. Morales has a socialist agenda, and as such his government is a close ally to the regimes of Hugo Chavez in Venezuela and Fidel Castro in Cuba.

5. “The only way to run away without leaving home,” per Twyla Tharp : ART
I love Twyla Tharp’s choreography, and her patented “moves”. Twyla was born in Portland, Indiana in 1941. She was named after Twila Thornburg, the “Pig Princess” of the 89th Annual Muncie Fair in Indiana. That’s one to tell to the grandkids …

6. Units of sound : BELS
In the world of acoustics, one bel is equal to ten decibels.

12. Venice tourist attraction : ST MARK’S
St. Mark’s Basilica is the Roman Catholic cathedral in the the city of Venice, Italy. In front of the basilica is the Piazza San Marco, the city’s main public square. St. Mark’s Square is a remarkable urban space in Europe as the sound of the human voice dominates, rather than the sound of traffic. That is indeed remarkable …

17. ___ Collins, first female space shuttle commander : EILEEN
Eileen Collins was the first female pilot of a Space Shuttle, and the first female commander of a Space Shuttle mission. She was also the first astronaut to fly the shuttle through the 360-degree, rendezvous pitch maneuver. This maneuver became routine for Shuttles in docking with the International Space Station. The idea is for the spacecraft to perform a back-flip so that the crew of the Space Station can photograph the Shuttle’s heat-shield to verify integrity prior to reentry.

18. Kind of screening, for short : TSA
The Transportation Security Administration (TSA) was of course created in 2001, soon after the 9/11 attacks.

29. Snap, Crackle and Pop, e.g. : TRIO
Snap, Crackle and Pop are three elves employed as the mascots for Kellogg’s Rice Krispies. The trio first appeared in an ad campaign in 1933, although the phrase “snap, crackle and pop” had been used for the cereal before then in a radio ads. By the way, the elves are selling “Rice Bubbles” in Australia, and the elves have different names in other parts of the world (like “Cric!, Crac! and Croc! in Quebec).

32. Snorkel, e.g.: Abbr. : SGT
Sgt. Snorkel (“Sarge”) is Beetle Bailey’s nemesis in the cartoon strip that bears his name. Snorkel has a dog called Otto that he dresses up to look just like himself. Otto started off as a regular dog, but artist Mort Walker decide to draw him more like his owner, and he became a big hit.

34. Big Whig : FILLMORE
Vice President Millard Fillmore took over the US Presidency when Zachary Taylor died after only 16 months in office. Fillmore was born in the Finger Lakes region of New York State, but grew up around Buffalo. He was one of the founders of the University of Buffalo and served as chancellor there after he left office in 1853.

42. Ends of ballades : ENVOIS
An envoy (also “envoi”) is a short closing stanza in some works of poetry.

The middle ear is the portion of the ear immediately behind the eardrum. The middle ear contains three small bones called the ossicles, the three smallest bones in the human body. The ossicles’ job is to transmit sound from the outer ear to the inner ear. The shape of the bones gives rise to their common names: the hammer, anvil and stirrup.

47. Mil. hero’s award : DSC
The Distinguished Service Cross (DSC) is the second highest honor awarded to members of the US Army. The DSC is equivalent to the Navy Cross and the Air Force Cross.

51. Spider-Man villain ___ Octavius : OTTO
Otto Octavius is a supervillain in the comic book universe. Also known as Doctor Octopus, Octavius is primarily a foe of Spider-Man.