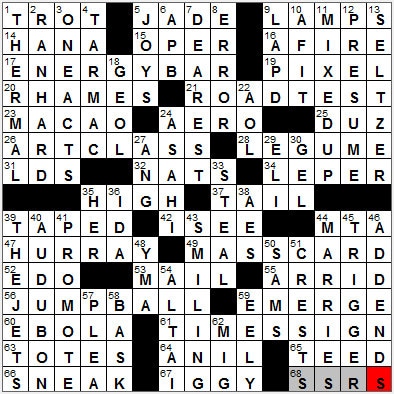 CROSSWORD SETTER: Gary Cee
THEME: HIGH TAIL … the theme answers are made up of two words, each of which can be tacked onto the TAIL of the word HIGH:

Today’s Wiki-est, Amazonian Googlies
Across
5. Light bluish green : JADE
Jade is actually the name given to two different mineral rocks, both of which are used to make gemstones. The first is nephrite, a mineral with a varying degree of iron content, the more iron the greener the color. The second is jadeite, a sodium and aluminum-rich pyroxene. As well as being used for gemstones, both jade minerals can be carved into decorative pieces.

14. Tennis’s Mandlikova : HANA
Hana Mandlikova is a former professional tennis star from Czechoslovakia. Mandlikova won four Grand Slam titles and then retired in 1990, at the ripe old age of 28.

19. One of many on a monitor : PIXEL
A pixel is a dot, the base element that goes to make up a digital image.

21. Subject of a Car and Driver report : ROAD TEST (high road & high-test)
“Car and Driver” is an automotive magazine published in Ann Arbor, Michigan. “Car and Driver” first appeared in 1955, when it was called “Sports Cars Illustrated”.

A high octane gasoline is described as “high-test”.

23. It was transferred to China in 1999 : MACAO
Macau (also Macao) was a Portuguese colony, the first European colony in China, established in the 16th century. Macau was handed back to the Chinese in 1999, two years after Hong Kong was returned by the British. That made Macau the last European colony in China. Today Macau’s economy is driven by tourism and gambling.

25. Detergent with a glass in every box, long ago : DUZ
Duz was a laundry detergent that was formulated as a competitor to Tide. Strangely enough, both Duz and Tide were manufactured by Proctor & Gamble. We had a detergent in the British Isles called Daz, and my guess is this was the same product as Duz, but with a slightly different name.

31. Mormon church, for short : LDS
The Church of Jesus Christ of Latter-day Saints, often abbreviated to “LDS”, is known colloquially as the Mormon Church.

32. D.C. team since ’05 : NATS
The Washington Nationals baseball team started out life as the Montreal Expos in 1969. The Expos moved to Washington in 2005 becoming the Nats. There are only two Major Leagues teams that have never played in a World Series; one is the Mariners and the other the Nats.

34. Kind of colony in “Papillon” : LEPER
A new blog reader pointed out that I failed to explain this clue fully, to avoid some potential confusion. In the movie “Papillon” starring Steve McQueen, McQueen’s character is banished to a PENAL colony on Devil’s Island, escapes, and then finds himself a guest for a night at a LEPER colony.

“Papillon” is an excellent film starring Steve McQueen and Dustin Hoffman as convicts in the French penal colony on Devil’s Island. “Papillon” is the French word for “butterfly” and is a reference to the character Henri “Papillon” Charrière, played by McQueen.

44. N.Y.C. commuters’ inits. : MTA
The MTA is the Metropolitan Transportation Authority, which has public transportation responsibility in the state of New York (as well as part of Connecticut).

49. Catholic remembrance : MASS CARD (High Mass & high card)
In the Roman Catholic tradition, Mass Cards are given to perhaps someone who is sick, or to the family of someone who has passed away. Mass cards are a certification that a Mass has been said, for the benefit of the person who is sick or in memory of the departed.

In the Roman Catholic tradition, a High Mass is more elaborate than a Low Mass. The former is usually a sung Mass and may involve more than one celebrant.

52. Tokyo, formerly : EDO
Edo is the former name of the Japanese city of Tokyo. Edo was the seat of the Tokugawa shogunate, a feudal regime that ruled from 1603 until 1868. The shogun lived in the magnificent Edo castle. Some parts of the original castle remain and today’s Tokyo Imperial Palace, the residence of the Emperor of Japan, was built on its grounds.

53. Word after e or G : MAIL
Gmail is a free webmail service provided by Google, and is my favorite of the free email services. Gmail made a big splash when it was introduced because it offered a whopping 1GB of storage whereas other services offered a measly 2-4MB on average.

55. Mitchum rival : ARRID
Arrid is an antiperspirant deodorant brand introduced in the thirties. Slogans associated with Arrid have been “Don’t be half-safe – use Arrid to be sure”, “Stress stinks! Arrid works!” and “Get a little closer”.

60. Virus that arose in the Congo : EBOLA
The Ebola virus causes a very nasty form of hemorrhagic fever. The name of the virus comes from the site of the first known outbreak of the disease, in a mission hospital in the Ebola River Valley in the Democratic Republic of the Congo.

64. Indigo plant : ANIL
Anil is another name for the indigo plant, as well as the name for the blue indigo dye that is obtained from it. The color of anil is relatively close to navy blue.

67. ___ Pop, 2010 Rock and Roll Hall of Fame inductee : IGGY
Iggy Pop is a punk rock performer from Muskegon, Michigan. Iggy’s real name is James Osterberg. When he was in high school, James was a drummer for a local band called the Iguanas, and so was given the nickname “Iggy”.

68. Lat. and Lith., formerly : SSRS
Latvia is one of the former Soviet Socialist Republics. People from Latvia are called Letts.

The nation of Lithuania is a former Soviet Socialist Republic sitting on the Baltic Sea in Northern Europe.

Down
4. Landing strip : TARMAC
Tarmac is of course short for “tarmacadam”. In the 1800s, Scotsman John Loudon McAdam developed a style of road known as “macadam”. Macadam had a top-layer of crushed stone and gravel laid over larger stones. The macadam also had a convex cross-section so that water tended to drain to the sides. In 1901, a significant improvement was made by English engineer Edgar Purnell Hooley who introduced tar into the macadam, improving the resistance to water damage and practically eliminating dust. The “tar-penetration macadam” is the basis of what we now call Tarmac.

6. The 9-Down might put one out, briefly : APB
An All Points Bulletin (APB) is a broadcast from one US law enforcement agency to another.

13. Fizzy water : SELTZER
The name “seltzer” comes from the village of Selters in Germany. Selters has natural springs of carbonated mineral water that is bottled and sold as Selters water. In English-speaking countries the name has morphed into “Seltzer” water.

22. IM pioneer : AOL
Even though instant messaging had been around since the 1960s, it was AOL who popularized the term “instant message” in the eighties and nineties.

24. Japanese brew : ASAHI
Asahi is a beer, and the name of the brewery that produces it. “Asahi” is Japanese for “morning sun”. Asahi introduced a “dry beer” in 1987, igniting a craze that rocketed the brewery to the number one spot in terms of beer production in Japan, with Sapporo close behind.

27. “Taking Woodstock” director Lee : ANG
Taiwanese director Ang Lee sure has directed a mixed bag of films, mixed in terms of genre but not in terms of quality. He was at the helm for such classics as “Sense & Sensibility” (my personal favorite), “Crouching Tiger, Hidden Dragon”, “Hulk”, and “Brokeback Mountain”.

29. Inventor Whitney : ELI
The inventor Eli Whitney is a best known for inventing the cotton gin. Whitney also came up with the important concept of “interchangeable parts”. Parts that are interchangeable can be swapped out of equipment or perhaps used in related designs.

35. The Doors’ “Love ___ Madly” : HER
The Doors formed in 1965 in Los Angeles. The band chose their name from a book by Aldous Huxley called “The Doors of Perception”.

36. Mrs. Morgenstern on “Rhoda” : IDA
Ida Morgenstern is a character on the seventies sitcom “Rhoda”. Ida is the mother of the title character, Rhoda Morgenstern. Ida was played by Nancy Walker, and Rhoda by Valerie Harper.

38. D.D.E. opponent : AES
Adlai Stevenson ran for president unsuccessfully against Dwight D. Eisenhower in 1952. Some years later, Stevenson served under President Kennedy as Ambassador to the United Nations. He was always noted for his eloquence and had a famous exchange in a Security Council meeting during the Cuban missile crisis. Stevenson bluntly demanded that the Soviet representative on the council tell the world if the USSR was installing nuclear weapons in Cuba, saying. “Don’t wait for the translation, answer ‘yes’ or ‘no’!” and then followed up with, “I am prepared to wait for my answer until Hell freezes over!”

39. Meadowlands team : THE JETS
Just like the New York Giants, the New York Jets are based in New Jersey, headquartered in Florham Park. The Jets and the Giants have a unique arrangement in the NFL in that the two teams share the same stadium, the New Meadowlands in East Rutherford, New Jersey. The Jets were an AFL charter team, formed in 1959 as the Titans of New York. They changed their name to the Jets in 1963.

40. Birders’ magazine : AUDUBON
“Audubon” is the magazine published bi-monthly for members of the National Audubon Society.

50. ___ Club : SAM’S
Sam’s Club is owned and operated by Walmart and is named after the company’s founder, Sam Walton.

54. ___ Mountains (Asian range) : ALTAI
The Altai Mountains are a range in Asia, located where the countries of Russia, China, Mongolia and Kazakhstan meet. “Altai” is Turkic for “Golden Mountain”.