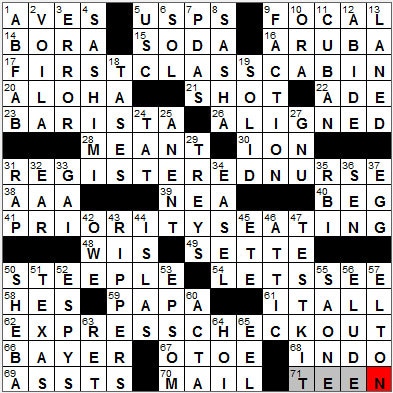 CROSSWORD SETTER: Jules P. Markey
THEME: Letters … all of the theme answers relate to the US Postal Service, with each answer starting with a class of mail service:

5A. Org. suggested by the starts of 17-, 31-, 41- and 62-Across : USPS
17A. Pricey accommodations on a ship : FIRST-CLASS CABIN (First-Class Mail)
31A. Ward worker : REGISTERED NURSE (Registered Mail)
41A. What disabled people are entitled to on a subway : PRIORITY SEATING (Priority Mail)
62A. Quick way to pay : EXPRESS CHECKOUT (Express Mail)
70A. 5-Across’s business : MAIL

Today’s Wiki-est, Amazonian Googlies
Across
1. Mediterranean and Baltic, in Monopoly: Abbr. : AVES
Mediterranean Avenue and Baltic Avenue are properties in the game of Monopoly. The street names in the US version of Monopoly are locations in or around Atlantic City, New Jersey.

5. Org. suggested by the starts of 17-, 31-, 41- and 62-Across : USPS
The US Postal Service is a remarkable agency in many ways. For starters, the governments right and responsibility to establish the Post Office is specifically called out in Article One of the US constitution.Also, the first postmaster general was none other than Benjamin Franklin. And the US Postal Service operates over 200,000 vehicles, which is the largest vehicle fleet in the world.

14. Tora ___ (Afghan area) : BORA
The famous cave that almost certainly housed Osama Bin Laden for a while was in Tora Bora in eastern Pakistan. Tora Bora is not far (~ 30 mi) from what used to be an even more famous spot, the Khyber Pass. “Tora Bora” is a Pashto name which translates to “black dust”.

16. One of the Dutch Antilles : ARUBA
Aruba is one of the so-called ABC Islands. The ABC Islands is the nickname given to the three westernmost islands of the Leeward Antilles in the Caribbean. The nickname comes from the first letters of the island names: Aruba, Bonaire and Curaçao. All three of the ABC Islands are part of the Kingdom of the Netherlands.

20. HI hi : ALOHA
The Hawaiian word “Aloha” has many meanings in English: affection, love, peace, compassion and mercy. More recently “aloha” has come to mean “hello” and “goodbye”, but only since the mid-1800s.

21. Kaput : SHOT
“Kaput” comes to us from French (via German). “Capot” means “not having won a single trick” in the French card game called Piquet.

23. One who knows his beans? : BARISTA
The person who serves coffee in a coffee shop is often called a “barista”. “Barista” is the Italian for “bartender”.

39. Grant-giving org. : NEA
The National Endowment for the Arts (NEA) is an agency funded by the federal government that offers support and financing for artistic projects. The NEA was created by an Act of Congress in 1965. Between 1965 and 2008, the NEA awarded over $4 billion to the arts, with Congress authorizing around $170 million annually through the eighties and much of the nineties. That funding was cut to less than $100 million in the late nineties due to pressure from conservatives concerned about the use of funds, but it is now back over the $150 million mark. I wonder how long that will last though …

48. Mich./Minn. separator : WIS
Wisconsin is named for the Wisconsin River, the longest river in the state. The famous missionary Father Jacques Marquette recorded the Algonquian name for the river as “Meskousing”. This was modified by French explorers to “Ouisconsin”, with the first syllable pronounced just like the French word for “yes” … “oui’. In the early 1800s this was anglicized to “Wisconsin”.

59. Hemingway’s nickname : PAPA
Ernest Hemingway moved around a lot. He was born in Illinois and after leaving school headed to the Italian front during WWI. There Hemingway served as an ambulance driver, an experience he used as inspiration for his novel “A Farewell to Arms”. He returned to the US after being seriously wounded, but a few years later moved to Paris where he worked as a foreign correspondent. He covered the Spanish War as a journalist, from Spain, using this experience for “For Whom the Bell Tolls”. During the thirties and forties he had two permanent residences, one in Key West, Florida and one in Cuba. In the late fifties he moved to Ketchum, Idaho where he committed suicide in 1961.

66. Maker of Aleve : BAYER
Bayer AG is a German pharmaceutical company founded in 1863. The company’s most famous product is its original brand of aspirin. The company logo, the Bayer cross, was introduced in 1904. That same logo can be seen on an illuminated sign in Leverkusen where the company is headquartered. That sign is the largest illuminated sign in the world.

67. Western tribe : OTOE
The Otoe (also Oto) Native American tribe originated in the Great Lakes region as part of the Winnebago or Siouan tribes. The group that would become the Otoe broke away from the Winnebago and migrated southwestwards ending up in the Great Plains. In the plains the Otoe adopted a semi-nomadic lifestyle dependent on the horse, with the American bison becoming central to their diet.

68. Prefix with European : INDO-
The Indo-European languages are a large group that includes most of the major languages of Europe, the Iranian plateau and South Asia. It is the largest grouping of languages in the world.

Down
1. ’90s-’00s Britcom : AB FAB
“Absolutely Fabulous” (sometimes called “Ab Fab”) is a cult-classic sitcom produced by the BBC. The two stars of the show are Jennifer Saunders and Joanna Lumley.

4. Menu item often accompanied by wasabi : SASHIMI
Sushi is a Japanese dish that has as its primary ingredient cooked, vinegared rice. The rice is usually topped with something, most often fish, and can be served in seaweed rolls. If you want raw fish by itself, then you have to order “sashimi”.

5. Pac-12 school, for short : USC
The athletic teams of the University of Southern California are called the USC Trojans. The women’s teams are also called the Trojans, but are sometimes referred to as Women of Troy.

7. Droids, e.g. : PDAS
A device like perhaps an iPhone, Droid, or Treo can be termed a Personal Digital Assistant (PDA).

8. Obama girl : SASHA
Sasha is the younger of the two Obama children, born in 2001. She is the youngest child to reside in the White House since John F. Kennedy, Jr. moved in with his parents as a small infant. Sasha’s Secret Service codename is “Rosebud”, and her older sister, Malia, has the codename “Radiance”.

11. Like the rumba, originally : CUBAN
The rumba is a Cuban dance, with influences brought by African slaves and Spanish colonists. The name “rumba” comes from “rumbo”, the Spanish word for “party, spree”.

13. Like interstates : LANED
The US Interstate System is more correctly known as the Dwight D. Eisenhower National System of Interstate and Defense Highways, a nod to President Eisenhower who championed the construction. The President had come to recognise the value of the German autobahn system in his experiences during WWII, and resolved to give the US a similar infrastructure. In real terms, the US Interstate construction project is said to have been the largest public works project since the Pyramids of Egypt.

18. Shocks, in a way : TASES
Victor Appleton wrote a novel for young adults called “Tom Swift and His Electric Rifle”. The company that developed the TASER electroshock weapon named their product as a homage to the novel, as TASER stands for “Thomas A. Swift’s Electric Rifle”. Interesting, eh?

24. Bit of body art, informally : TAT
The word “tattoo” was first used in English in the writings of the famous English explorer Captain Cook. In his descriptions of the indelible marks adorning the skin of Polynesian natives, Cook anglicized the Tahitian word “tatau” into our “tattoo”.

25. Regarding : ANENT
“Anent” is a preposition meaning “regarding, concerning”.

27. Beast with a beard : GNU
A gnu is also known as a wildebeest, an antelope native to Africa. Wildebeest is actually the Dutch word for “wild beast”.

29. Low poker holdings : TREYS
A trey of clubs, for example, is a name for the three of clubs in a deck of cards. The name “trey” can also be used for a domino with three pips.

31. Jay-Z’s genre : RAP
Jay-Z, as well as being a successful and very rich rap artist, is married to singer Beyonce.

44. Puerto Rico y La Española : ISLAS
Puerto Rico is located in the northeastern Caribbean (in the Atlantic Ocean), east of the Dominican Republic. The name “Puerto Rico” is Spanish for “rich port”. The locals often call their island Borinquen, the Spanish form of “Boriken”, the original name used by the natives.

The island of Hispaniola in the Caribbean (divided into Haiti and the Dominican Republic), is known in Spanish as the island (isla) of La Española.

50. Biblical land on the Arabian Peninsula : SHEBA
No one knows for sure where the kingdom of Sheba was actually located. Sheba is referenced in the Bible several times. The “Queen of Sheba” is mentioned as someone who traveled to Jerusalem to behold the fame of King Solomon.

52. Awards won by LeBron James and David Beckham : ESPYS
The ESPY Awards are a creation of the ESPN sports television network. One difference with similarly named awards in the entertainment industry is that ESPY winners are chosen solely based on viewer votes.

LeBron James plays basketball for the Miami Heat. James seems to be in demand for the covers of magazines. He became the first African American man to adorn the front cover of “Vogue” in March 2008. That made him only the third male to make the “Vogue” cover, following Richard Gere and George Clooney.

David Beckham is a gifted soccer player who played for Manchester United in England, and who now plays for Los Angeles Galaxy. Famously, Beckham is married to Victoria Beckham (née Adams), the Spice Girl known by the stage name Posh Spice.

53. British racetrack site : EPSOM
The Surrey town of Epsom in England is most famous for its racecourse, at which is run the Epsom Derby every year, one of the three races that make up the English Triple Crown. You might also have heard of Epsom salt. Epsom salt is magnesium sulfate, originally prepared by boiling down mineral waters. Epsom was indeed a spa town at one time.

55. Rhône feeder : SAONE
The Saône is a river in eastern France that joins up with the Rhône in Lyon.

57. Rocker John : ELTON
Elton John’s real name is Reginald Dwight. John was knighted in 1998, not for his music but for his charitable work. He founded his own Elton John AIDS Foundation back in 1992.

60. Court records : ACTA
Actum (plural acta) is the Latin word for “deed”. It is used in English to describe many official records, including minutes, proceedings etc.

64. ___ polloi : HOI
“Hoi polloi” is a Greek term, literally meaning “the majority, the many”. In English it has come to mean “the masses” and is often used in a derogatory sense.