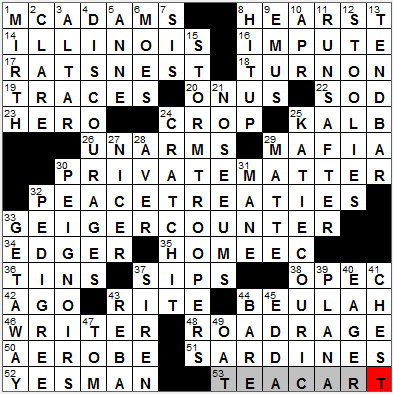 
Today’s Wiki-est, Amazonian Googlies
Across
1. Actress Rachel of “The Notebook” : MCADAMS
Rachel McAdams is a Canadian actress, from London, Ontario. Recently MacAdams played the role of Irene Adler in “Sherlock Holmes”, the love interest for the title character played by Robert Downey, Jr. The last film that I saw her in was the wonderful “Midnight in Paris” by Woody Allen.

8. Newsman who famously defined news as “something somebody doesn’t want printed” : HEARST
William Randolph Hearst got into publishing when he took over “The San Francisco Examiner” from his father, George Hearst. Beyond his work in the newspaper business, Hearst was also a politician and represented a district of New York in the US House. Hearst’s life was the inspiration for the lead role in the 1941 movie “Citizen Kane” with Orson Welles playing the Hearst-like character. If you’re ever driving along the coast between Los Angeles and San Francisco, I’d recommend a stop at Hearst Castle, William Randolph’s magnificent estate located near San Simeon.

14. ___ Avenue (Monopoly property landed on the most) : ILLINOIS
The commercial game of Monopoly is supposedly a remake of “The Landlord’s Game” created in 1903 by a Quaker woman called Lizzie Phillips. Phillips used her game as a tool to explain the single tax theory of American economist Henry George. The Landlord’s Game was first produced commercially in 1924. The incredibly successful derivative game called Monopoly was introduced in 1933 by Charles Darrow, who became a very rich man when Parker Brothers bought the rights to the game just two years later in 1935.

22. Building material for Great Plains settlers : SOD
Sod houses were a practical alternative to log cabins in the prairies. Because the prairie lacked the timber needed for more traditional construction, walls were made of patches of sod piled on top of each other. Sod houses were really well-insulated, but were also damp and infested with insects.

25. 1980s “Meet the Press” host Marvin : KALB
Marvin Kalb is a journalist most famous for his 30-year stint reporting for CBS and NBC News. Kalb was the last person to be recruited by journalism icon Edward R. Murrow.

29. Hit group? : MAFIA
Apparently “Cosa Nostra” is the real name for the Italian Mafia. “Cosa Nostra” translates as “our thing” or “this thing of ours”. The term first became public in the US when the FBI managed to turn some members of the American Mafia. It was established that “Cosa Nostra” was also used in Sicily when Italian authorities penetrated the Sicilian Mafia in the 1980s. The name “mafia” seems to be just a literary invention that has become popular with the public.

33. Amateur geologist’s purchase : GEIGER COUNTER
A Geiger counter is a particle detector that measures ionizing radiation, such as alpha particles, beta particles and gamma rays. Often a Geiger counter is equipped with a speaker through which clicks are broadcast each time a particle is detected. We’ve all heard those terrifying clicks in the movies, I am sure.

37. Drinks bourbon neat, maybe : SIPS
Bourbon is a whiskey made here in North America, with the primary ingredient being corn. Production of the whiskey has for centuries been associated with Bourbon County in Kentucky, which gave its name to the drink.

38. Ecuador is a member of it : OPEC
The OPEC cartel (the Organization of the Petroleum Exporting Countries) was formally established in 1960 and has been headquartered in Vienna since 1965. The US is actually the third largest oil producer in the world (after Russia and Saudi Arabia). One reason America isn’t in OPEC, even though we are a big producer, is that we import a lot more than we export. But you probably knew that already …

42. Fifth word of the lyrics to “American Pie” : AGO
Don McLean released his greatest hit, “American Pie”, back in 1971. Despite the song’s iconic position in the pop repertoire, McLean has been remarkably reticent about its origins and the meaning of the lyrics. We do know that it was inspired by the death of Buddy Holly in a plane crash (“the day the music died”). McLean has also told us that he first read about the death of his idol when delivering newspapers the day after the crash (“February made me shiver/with every paper I’d deliver”). Although the lyrics have been analyzed and interpreted by many, McLean’s stance remains that it is just a poem set to music …

50. Oxygen-dependent organism : AEROBE
An aerobe is an organism that lives in an environment rich in oxygen. An anaerobe on the other hand does not require oxygen for survival.

51. They get canned : SARDINES
Sardines are oily fish related to herrings. Sardines are also known as pilchards, although in the UK “sardine” is the name for a young pilchard.

3. Missal stand’s place : ALTAR
Missals came into being in medieval times and were used primarily by priests and ministers. A missal is a book containing all the texts necessary for the celebration of Mass through the liturgical year. Nowadays missals are used by the congregation and not just by the celebrants. The term “missal” comes from the Latin for “Mass book”.

5. Last monarch of the House of Stuart : ANNE
Anne, Queen of Great Britain ruled England, Scotland and Ireland from 1702 to 1707. Anne was the daughter of James II of England. It was during Queen Anne’s reign that the kingdom of England and Scotland were united, forming the sovereign state of Great Britain. Anne passed away without having an heir, despite seventeen pregnancies! That made Anne the last monarch of the House of Stuart.

6. Hangout for Homer : MOE’S
Moe Szyslak is the surly bartender and owner of Moe’s Tavern in “The Simpsons” animated TV show. I don’t really care for “The Simpsons”, but Hank Azaria who supplies the voice for the Moe character … him I like.

9. Winged runners : EMUS
The emu has had a tough time in Australia since man settled there. There was even an “Emu War” in Western Australia in 1932 when migrating emus competed with livestock for water and food. Soldiers were sent in and used machine guns in an unsuccessful attempt to drive off the “invading force”. The emus were clever, breaking their usual formations and adopting guerrilla tactics, operating as smaller units. After 50 days of “war”, the military withdrew. Subsequent requests for military help for the farmers were ignored. The emus had emerged victorious …

10. Mo. when the Civil War began : APR
Fort Sumter is a fortification lying on an artificially constructed island in Charleston Harbor in South Carolina. In December 1860, when South Carolina seceded from the Union, US Army forces relocated to Fort Sumter deeming it to be a relatively defensible location. On April 11, 1861, confederate forces demanded that the fort be surrendered. When the defenders refused to budge, confederate artillery opened fire at 4:30 in the morning of April 12, 1861, starting the American Civil War.

12. Crime reporters? : STOOLIES
Stoolies, also called canaries, will sing to the cops given the right incentive. “Stoolie” is short for “stool pigeon”. A stool pigeon was a decoy bird tied to a stool so as to lure other pigeons. Originally a stoolie was a decoy for the police, rather than an informer, hence the name.

15. “Star Wars” extras : STORMTROOPERS
The “Star Wars” film series has made over 4 billion dollars of box office revenue. That makes it the third-highest-grossing film series of all time. Second most successful series is the James Bond franchise, and the top spot is held by the “Harry Potter” movies.

21. Small biters : NO-SEEUMS
Biting midges are sometimes called no-seeums, as they are small and often bite without you seeing them …

24. Dickensian surname : CRATCHIT
Bob Cratchit is the underpaid clerk who works for Ebeneezer Scrooge in the Charles Dickens story “A Christmas Carol”.

The classic 1843 novella “A Christmas Carol” by Charles Dickens has left us with a few famous phrases and words. Firstly, it led to popular use of the phrase “Merry Christmas”, and secondly it gave us the word “scrooge” meaning a miserly person. And thirdly, everyone knows that Ebeneezer Scrooge uttered the words “Bah! Humbug!”.

25. Only person to guest-host “The Tonight Show With Jay Leno” : KATIE COURIC
Katie Couric left NBC’s “The Today Show” in 2006 and took over as news anchor for “CBS Evening News”. In so doing she became the first solo female anchor of a broadcast network evening news program. Couric also has the honor of being the only person to guest-host on “The Tonight Show with Jay Leno”. In fact she “swapped jobs” on that particular day, and Leno filled in for Couric on “The Today Show”.

30. Gowns that are rarely worn out : PEIGNOIRS
A peignoir is a loose dressing gown sometimes worn by a woman. The term “peignoir” comes from “peigner”, the French for “to comb the hair”. The idea was that a peignoir was worn by a lady while she was combing her hair before retiring.

31. A zebra has a short one : MANE
The name “zebra” comes from an old Portuguese word “zevra” meaning “wild ass”. Studies of zebra embryos show that zebras are basically black in color, with white stripes that develop with growth. Before this finding, it was believed they were white, with black stripes.

32. Livestock auction info : PEDIGREE
A genealogical chart showing the descent from an ancestor is branched, and was once said to look like the footprint of a bird, a crane in fact. The Old French for “foot of a crane” is “pied de gru”, from which we get our word “pedigree”. Interesting …

37. Fabulous singer : SIREN
In Greek mythology, the Sirens were seductive bird-women who lured men to their deaths with their song. When Odysseus sailed closed to the island home of the Sirens he wanted to hear their voices, but in safety. He had his men plug their ears with beeswax and then ordered them to tie him to the mast and not to free him until they were safe. On hearing their song he begged to be let loose, but the sailors just tightened his bonds and and the whole crew sailed away unharmed.

45. 13th-century composition : EDDA
The Poetic Edda and Prose Edda are two ancient works that are the source for much of Norse mythology.