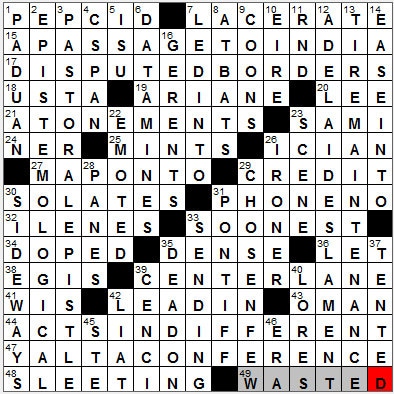 CROSSWORD SETTER: Joe Krozel
THEME: None, although it’s worth noting that this grid has fewer black squares than any crossword ever published before in the New York Times.
COMPLETION TIME: 35m 48s
ANSWERS I MISSED: 2 … NER (Nar), EPISTEMOLOGICAL (epistamelogical)


Today’s Wiki-est, Amazonian Googlies
Across
1. Line of acid reflux medications : PEPCID
Pepcid is a brand name for famotidine, a drug used in the treatment of peptic ulcers.

15. 1984 film based on the 1924 novel : A PASSAGE TO INDIA
“A Passage to India” is a wonderful novel by E. M. Forster set in the days of the British Raj. There are two excellent adaptations for the screen that I would recommend. There’s a BBC television version from 1965 starring a wonderful cast including Virginia McKenna and Cyril Cusack. There is also an Oscar-winning movie version from 1984 with Alec Guinness and Peggy Ashcroft. Forster had first-hand knowledge of life during the Raj, having worked in India during the twenties.

18. Court org. : USTA
The United States Tennis Association (USTA) is the national organization governing the sport of tennis in the US.

19. French-built rocket : ARIANE
Ariane is a launch vehicle used by European space agencies. The Ariane rocket is launched from French Guiana in the northern part of South America.

20. Downwind : LEE
“Alee” is the direction away from the wind. If a sailor points into the wind, he or she is pointing “aweather”.

23. Laplanders : SAMI
Lapland is a geographic region in northern Scandinavia, largely found within the Arctic Circle. Parts of Lapland are in Norway, Sweden and Finland. The people who are native to the region are called the Sami people. The Sami don’t like to be referred to as Lapps as they regard the term as insulting.

24. ___ Tamid (synagogue lamp) : NER
“Ner tamid” is the Hebrew term for a sanctuary lamp, although it is often referred to in English as “eternal flame”.

30. Undergoes liquefaction, as a gel : SOLATES
“To solate” is to change from a gel into a “sol”. A sol is a suspension of tiny solid particles in a liquid.

Ilene Kristen is an American actress famous for her roles in daytime soaps. She played Delia Reid on “Ryan’s Hope” and Roxy Balsom on “One Life to Live”.

38. Guidance : EGIS
Egis is a variant of the word “aegis”. Someone is said to be under the aegis of another when that other person provides protection or perhaps sponsorship.

41. Great Lakes state: Abbr. : WIS
Wisconsin is named for the Wisconsin River, the longest river in the state. The famous missionary, Father Jacques Marquette, recorded the Algonquian name for the river as “Meskousing”. This was modified by French explorers to “Ouisconsin”, with the first syllable pronounced just like the French word for “yes” … “oui’. In the early 1800s this was anglicized to “Wisconsin”.

42. Segue : LEAD-IN
“Segue” is an Italian word that literally means “now follows”. It was first used in musical scores directing the performer to play into the next movement without a break.

43. Country whose name sounds like a Jamaican exclamation : OMAN
Oman lies on the southeast coast of the Arabian Peninsula and is neighbored by the UAE, Saudi Arabia and Yemen. The capital city of Muscat has a strategic location on the Gulf of Oman and has a history of invasion and unrest. Centuries of occupation by the Persians ended in 1507 when the Portuguese took the city in a bloody attack. The Portuguese held Muscat for much of the next one hundred years until finally ousted by local Omani forces in 1648. A Yemeni tribe invaded the area in 1741 and set up a monarchy that has been in place ever since.

47. 1945 event : YALTA CONFERENCE
The Yalta Conference was a wartime meeting between WWII leaders Franklin D. Roosevelt, Winston Churchill and Joseph Stalin. Held in February of 1945, the conference is most remembered for decisions made on the post-war organization of Europe. To a large extent, the three leaders made decisions carving up influence around the world that has had implications to this day.

48. Shooting pellets? : SLEETING
When it is sleeting, I guess one might say that pellets of ice are shooting out of the sky.

3. 1 or 2 Timothy : PASTORAL EPISTLE
The First and Second Epistles to Timothy are letters that were written by Saint Paul to Timothy, a young colleague of his.

4. Where to hear hearings : C-SPAN
C-SPAN is a privately-funded, non-profit cable channel that broadcasts continuous coverage of government proceedings.

5. Sch. in Ames : ISU
Iowa State University of Science and Technology (ISU) is located in Ames, Iowa. Among many other notable events, ISU created the country’s first school of veterinary medicine, in 1879.

6. Finds customers from social media, perhaps : DATA MINES
The process of data mining is used to extract information from a database and present it in a form that facilitates further use.

9. Woodsy scavengers : COONS
The raccoon is native to North America. In captivity, raccoons can live to over 20 years of age, but in the wild they only live two or three years. The main causes for the shorter lifespan are hunting and road traffic.

12. “Guys and Dolls” song : ADELAIDE’S LAMENT
“Guys and Dolls” is a musical with music and lyrics by Frank Loesser. It was first produced on Broadway, in 1950, and ran for 1200 performances. The show was based on a book written by Jo Swerling and Abe Burrows. “Guys and Dolls” was chosen as winner of a Pulitzer in 1951, but the award was cancelled as Abe Burrows was having problems with the House Un-American Activities Committee at the time.

16. Rulers or managers : GERENTS
A “gerent” is a person who manages or rules. The term comes from the Latin “gerere” meaning “to manage”.

28. Tiffany features : PANES
The archetypal Tiffany lamp is made up of pieces of colored leaded glass, with a copper foil bonding the pieces together, and a solder applied over the foil. The effect resembles a stained glass window.

31. Wearer of the triregnum crown : PONTIFF
“Triregnum” is the Latin name for the papal tiara that has been worn by Roman Catholic popes since the 8th century. The crown has three tiers, so it is also known as the triple tiara. “Triregnum” is Latin for “three crowns”.

40. Unlike HDTV screens : LO-RES
In the digital world, resolution of a display, television, image etc. is defined by the number of pixels that can be displayed in a standard area (say a square inch). The emphasis today is on producing larger area displays/televisions, i.e increasing the number of pixels simply by increasing the size of the screen. In the past couple of decades the emphasis was on adding more pixels within the same screen size to increase resolution. That would just be wasted effort these days as further increases in resolution cannot be perceived by the eye. Now that TVs are capable of displaying such high resolutions, broadcasters are responding by producing a video signal of “higher resolution” that they call high-definition television, HDTV.

The 1949 Rodgers and Hammerstein musical “South Pacific” is based on stories from the 1947 book “Tales of the South Pacific” by James A. Michener. “South Pacific” really is a classic show, featuring some classic songs like “Bali Ha’i”, “I’m Gonna Wash That Man Right Outta My Hair”, “Some Enchanted Evening” and “Happy Talk”.

46. Christian ___ : ERA
The designations Anno Domini (AD, “year of Our Lord”) and Before Christ (BC) are found in the Julian and Gregorian calendars. The dividing point between AD and BC is the year of the conception of Jesus, with AD 1 following 1 BC without a year “0” in between. The AD/BC scheme dates back to AD 525, and gained wide acceptance soon after AD 800. Nowadays a modified version has become popular, with CE (Common/Christian Era) used to replace AD, and BCE (Before the Common/Christian Era) used to replace BC.


Return to top of page