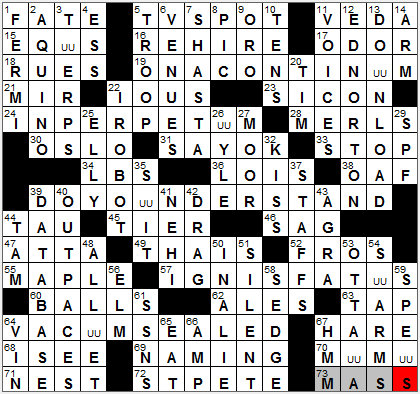 CROSSWORD SETTER: Joel Fagliano
THEME: W and Double U … this is a rebus puzzle, with the letters UU in some squares. This UU is read as “UU” in across answers, and as “W” in down answers:

11. Hindu scripture : VEDA
The Vedas are a body of ancient Indian texts, the oldest Hindu scriptures. The word “véda” is Sanskrit, and means “knowledge, wisdom”.

15. 1975 Tony winner for Best Play : EQ(UU)S
“Equus” is a play written in 1973 by Peter Shaffer. Shaffer wrote the play after he heard about a real-life crime in which a 17-year-old youth blinded six horses. The play tells of a psychiatrist treating a young man who has an unhealthy fascination with horses.

L’Arc de Triomphe de l’Etoile in Paris was built to honor those who fought for France, particularly during the Napoleonic Wars. It is the second largest triumphal arch in the world, after the Arch of Triumph in Pyongyang, North Korea. If you are visiting Paris, don’t just take a picture of the arch, be sure to go inside and see the marvelous chambers and carvings, and wander around on top of the arch and enjoy the magnificent view.

21. It orbited Earth 86,331 times : MIR
Mir was a remarkably successful project, with the station still holding the record for the longest continuous manned presence in space, at just under ten years. Towards the end of the space station’s life however, the years began to take their toll. There was a dangerous fire, multiple system failures, and a collision with a resupply ship. The Russian commitment to the International Space Station drained funds for repairs, so Mir was allowed to reenter the Earth’s atmosphere and burn up in 2001.

28. European blackbirds : MERLS
A merl (or merle) is often called a blackbird over in Europe. The male merl is completely black, with a yellow beak.

30. Home of Literature Nobelist Sigrid Undset : OSLO
Sigrid Undset was a Norwegian novelist. Undset’s best-known work is “Kristin Lavransdatter”, and she was awarded the Nobel prize for literature in 1928.

36. “Family Guy” wife : LOIS
“Family Guy” is a very successful animated show on television. It was created by Seth MacFarlane, the same guy who came up with “American Dad!”. My kids love them both. Me, I can’t stand ‘em, the television shows that it is! Although, at times …

38. Goofus : OAF
In urban slang a “goofus” is an innocent type of person who acts in a silly manner. The term derives from the character Goofus who appears in the “Goofus & Gallant” cartoons published in the “Highlights for Children” kid’s magazine.

39. “Capeesh?” : DO YO(U U)NDERSTAND
“Capeesh?” is a slang term meaning “do you understand?” It comes from the Italian “capisce” meaning “understand”.

44. Torque symbol : TAU
Tau is the 19th letter of the Greek alphabet, the letter which gave rise to our Roman “T”. Both the letters tau (T) and chi (X) have long been symbolically associated with the cross.

Torque can be thought of as a turning force, say the force needed to tighten a bolt or a nut.

49. 1894 opera set in Alexandria : THAIS
“Thais” is a 3-act opera composed by Jules Massenet. The work is most famous for its “Meditation”, the beguiling entr’acte performed between scenes in Act II.

52. Jackson 5 features, slangily : FROS
The Afro hairstyle might be referred to as a ‘fro.

The Jackson 5 singing group was originally made up of brothers Tito, Jackie, Jermaine, Marlon and Michael.

57. Will-o’-the-wisp : IGNIS FAT(UU)S
The term jack-o’-lantern was originally used as the colloquial name for “ignis fatuus”, or “will-o’-the-wisp”. Ignis fatuus is an eerie light seen at night over bogs and marshes, caused by the spontaneous oxidation (burning) of phosphine and/or methane that emanates from the bog.

67. Tea party attendee in “Alice in Wonderland” : HARE
“Alice’s Adventures in Wonderland” is often cited as as the origin of the expression “mad as a March hare”, perhaps because of confusion between the March Hare and the Mad Hatter who appear together at the famous “tea party” in the story. However, the expression actually predates the Lewis Carroll tale, and arose as hares were said to behave quite “madly” in the March breeding season.

70. Colorful dress : MUUMUU
A muumuu is a loose dress that originated in Hawaii. Many muumuus are brightly colored and made of the same material as the ubiquitous Hawaiian shirt. The word “mu’umu’u” means “cut off” in Hawaiian.

72. Rays’ home, informally : ST PETE
St. Petersburg, Florida is often referred to as St. Pete by locals and visitors alike. The neighboring city of St. Petersburg Beach also had its name shortened routinely, so in 1994 the residents voted to change the name officially to St. Pete Beach.

The Tampa Bay Rays is a relatively “young” franchise, being formed in 1998. The initial name of the franchise was the Tampa Bay Devil Rays. and while known as the Devil Rays the team finished last in the league in almost every year. The name was changed to the Tampa Bay Rays in 2008, and I am told the Rays started into a streak of winning seasons.

Down
1. Unit of length that’s roughly the diameter of a proton : FERMI
The unit of distance called a fermi is pretty small, one quadrillionth of a meter, and is named after Enrico Fermi.

2. Time’s 1986 Woman of the Year : AQUINO
Corazon Aquino was the first woman to hold the office of President of the Philippines. She led the popular revolt against President Ferdinand Marcos in 1986 which led to the restoration of democracy in the country. She came to lead the movement against Marcos upon the assassination of her husband, the most visible opponent of Marcos. She took to the role reluctantly, proclaiming herself a “plain housewife”. I lived in the Philippines for a couple of years when Aquino’s successor Ferdinand Ramos was in power. Based on what I learned there, President Aquino had transformed the country.

3. Jerks : T(W)ERPS
“Twerp” and “pipsqueak” are both terms used for someone who is insignificant and contemptible.

7. California county : SHASTA
Shasta county is in northern California, and is named after Mount Shasta. The origin of the name “Shasta” seems to be unclear. It may have come from the Russian “tchastal” meaning “white, clean, pure”, a name given to the volcanic peak by early Russian immigrants.

12. Best pal in a 1950s sitcom : ED NORTON
Art Carney was best known as the actor who played Ed Norton on the fifties television show “The Honeymooners”.

20. QB Tebow : TIM
Tim Tebow is a quarterback playing for the Denver Broncos. Tebow was the first college sophomore to win the Heisman Trophy.

22. Pioneering 1950 Isaac Asimov book : I, ROBOT
Isaac Asimov was a wonderful science fiction writer, and a professor of biochemistry. He was a favorite author as I was growing up and I must admit that some hero worship on my part led me to study and work as a biochemist for a short while early in my career. My favorite of his works is the collection of short stories called “I, Robot”.

25. ___ May Clampett of 1960s TV : ELLY
Elly May Clampett was played by Donna Douglas on the sixties television show “The Beverly Hillbillies”.

“The Beverly Hillbillies” was a rags-to-riches sitcom that aired from 1962 to 1971, a creation of writer Paul Henning. Buoyed by the success of “Hillbillies”, Henning created another sitcom in 1965, one that was a complete opposite in terms of plot, the riches-to-rags story of “Green Acres”.

29. Lotion letters : SPF
In theory, the sun protection factor (SPF) is a calibrated measure of the effectiveness of a sunscreen in protecting the skin from harmful UV rays. The idea is that if you wear a lotion with say SPF 20, then it will take 20 times as much UV radiation to cause the skin to burn if using lotion, than without it. I say just stay out of the sun …

35. “M*A*S*H” Emmy winner : S(W)IT
Loretta Swit started playing “Hot Lips” Houlihan on “M*A*S*H” in 1972. She and Alan Alda were the only actors who appeared in both the pilot and the series finale. Swit has written a book on needlepoint, would you believe? It’s called “A Needlepoint Scrapbook”.

“Nehi Corporation” was the nickname for the Chero-Cola/Union Bottle Works that introduced the Nehi drink in 1924. Years later the company developed a new brand, Royal Crown Cola (also known as RC Cola). By 1955, RC Cola was the company’s flagship product, so the “Nehi Corporation” became the “Royal Crown Company”. In 1954, RC Cola became the first company to sell soft drinks in cans.

50. How Perry Mason often caught the guilty : IN A LIE
I must have read all of the Perry Mason books when I was in college. I think they kept me sane when I was facing the pressure of exams. Author Erle Stanley Gardner was himself a lawyer, although he didn’t get into the profession the easy way. He went to law school, but got himself suspended after a month. So he became a self-taught attorney and opened his own law office in Merced, California. Understandably, he gave up the law once his novels became successful.

53. River to the St. Lawrence : OTTA(W)A
The Ottawa River takes its name from the Odawa people, an Algonquin nation. The city Of Ottawa changed its name to that of the river, from Bytown in 1855. The original townsite was called Bytown after Captain John By who completed the Rideau Canal that runs from Kingston on Lake Ontario to present-day Ottawa.

61. Identity theft targets: Abbr. : SSNS
The main purpose of a Social Security Number (SSN) is to track individuals for the purposes of taxation, although given its ubiquitous use, it is looking more and more like an “identity number” to me. The social security number system was introduced in 1936. Prior to 1986, an SSN was required only for persons with substantial income so many children under 14 had no number assigned. For some years the IRS had a concern that a lot of people were claiming children on their tax returns who did not actually exist. So, from 1986 onward, it is a requirement to get an SSN for any dependents over the ago of 5. Sure enough, in 1987 seven million dependents “disappeared”.

64. Sportscaster Scully : VIN
Vin Scully is the play-by-play sportscaster for the LA Dodgers. Scully has been working with the LA Dodgers from 1950, making him the longest working sportcaster with one club in the history of professional sports.

66. Stage item : AMP
An electric guitar, for example, needs an amplifier to take the weak signal created by the vibration of the strings and turn it into a signal powerful enough for a loudspeaker.