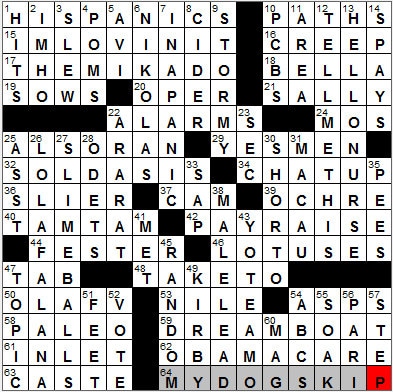 
Today’s Wiki-est, Amazonian Googlies
Across
1. Powerful voting bloc : HISPANICS
“Hispanic” comes from the Latin word for “Spain”, and refers all Spanish-speaking peoples around the world. “Latino” refers to people from Latin America, who might not necessarily speak Spanish (e.g. Brazilians).

17. Musical work that includes “Willow, Tit-Willow” : THE MIKADO
“The Mikado” is a wonderful comic opera by Gilbert and Sullivan, set in the exotic location of Japan. “Mikado” is a former term for the “Emperor of Japan”.

“Tit Willow” is a song from Gilbert & Sullivan’s “The Mikado”. The song refers to the Willow Tit, a small bird found right across Europe and Asia.

20. Job largely automated these days: Abbr. : OPER
I think the reference is to a telephone operator’s job …

21. Gal asked to “lay down” in a Clapton song : SALLY
“Lay Down Sally” is a fabulous song co-written by Eric Clapton, and recorded by him in 1977.

Can you believe that Eric Clapton only had one chart-topper in the US? In 1974 he released a cover version of the Bob Marley classic “I Shot the Sheriff”, and ended up selling more copies of that song than Bob Marley did himself.

24. Ways, for short : MOS
“Modus operandi” is the Latin for “mode of operating”, a term we’ve been using since the mid-1600s. It’s often used by the police when referring to the methods typically employed by a particular perpetrator of a crime, and is usually abbreviated to “M.O.”

37. Overhead ___ : CAM
Cams are wheels found on the cam shaft of a car’s engine that are eccentric in shape rather than circular. The rotation of the cams causes the intake and exhaust valves of the cylinders to open and close.

39. Like pueblos : OCHRE
A pueblo is a Native American village, a term used in the American Southwest. The buildings in a pueblo are usually made of stone and adobe mud, and hence are ochre in color.

40. Gong : TAMTAM
A tamtam is a percussion instrument, similar to a gong.

47. Pull-___ : TAB
The oldest method of opening a can with a device included in the can’s design is the pull-tab or ring pull, invented in Canada in 1956. The design was long-lived but it had its problems, so the world heaved a sigh of relief with the invention of the stay-on-tab in 1975. The new design led to less injuries and eliminated all those used pull-tabs that littered the streets.

53. See 54-Across : NILE
Depending on definition, the Nile is generally regarded as the longest river on the planet. The Nile forms from two major tributaries, the White Nile and the Blue Nile, which join together near Khartoum, the capital of Sudan. From Khartoum the Nile flows north, traveling almost entirely through desert making it central to life for the peoples living along its length.

54. 53-Across menaces : ASPS
The asp is a venomous snake found in the Nile region of Africa. It is so venomous that the asp was used in ancient Egypt and Greece as a means of execution. Cleopatra observed such executions noting that the venom brought on sleepiness without any painful spasms. When the great queen opted to commit suicide, the asp was therefore her chosen method.

62. 2012 election issue : OBAMACARE
The correct name for what has been dubbed “Obamacare” is the “Patient Protection and Affordable Care Act”.

64. Kevin Bacon film of 2000 : MY DOG SKIP
“My Dog Skip” is a film released in 2000 that is based on a memoir by Willie Morris. Both film and book tell the story of Morris at about the age of nine growing up with his dog in Yazoo City, Mississippi. In the book Skip is a Fox Terrier, but in the movie Skip is a  Jack Russell.

Down
1. Modern measures of popularity : HITS
How popular a website is, is measured by the number of “hits” it gets in a given time, the number of times it is visited.

4. Pooches with turned-up tails : POMS
The Pomeranian is a breed of small dog, named for the Pomerania region of Europe (part of eastern Germany and northern Poland). The breed was much loved by the royalty of Europe in the 17th and 18th centuries. In the 19th century, Queen Victoria owned a particularly small Pomeranian. Due to the notoriety of the monarch’s pet, the Pomeranian was bred for small size, so that during the Queen’s admittedly long reign, the size of the average “pom” was reduced by 50% …

13. Old vaudevillian catcall : HELLO, NURSE!
In the days of vaudeville it was very common to see a voluptuous actress come onto stage wearing a nurse’s uniform, at which point the other (male) characters on the stage would call out “Hello, nurse!”

22. Mountain on the Armenian coat of arms : ARARAT
Mount Ararat is in Turkey. Ararat is a snow-capped dormant volcano with two peaks. The higher of the two, Greater Ararat, is the tallest peak in the country. Ararat takes its name from a legendary Armenian hero called Ara the Beautiful (also known as Ara the Handsome).

Armenia is a landlocked country found east of Turkey, and is a former Soviet Republic. Back in the year 301CE, the ancient Kingdom of Armenia became the first nation in the world to adopt Christianity as its national religion.

26. Singer/dancer/actress once called the “Queen of Las Vegas” : LOLA FALANA
Lola Falana is a singer, dancer and actress who grew up in Philadelphia. In the sixties Falana had an affair with, and later became good friends with, Sammy Davis Jr. Davis helped get her act into Las Vegas where she it very successful, eventually earning Falana the nickname “Queen of Las Vegas”. With her success came money, and so she became the highest paid female performer in Vegas at that time. Sadly, Falana suffers from multiple sclerosis, a disease that forced her to cut short her career as an entertainer.

28. “Night Music” playwright : ODETS
Clifford Odets was a playwright, screenwriter and director from Philadelphia. “Waiting for Lefty” was the first play by Clifford Odets that made it to stage, in 1935. The storyline deals with cab drivers who are planning a strike. Famously, the play breaks through the “fourth wall” by placing actors within the audience who react to the action taking place on the stage.

35. Insignia on Pirates uniforms : PEES
The Pittsburgh Pirates were an early team in the National Baseball League, joining in 1887 just six years after the league was formed. The Pirates played in the first ever World Series, in 1903, and actually won their first World Series in 1909.

49. Pink Nintendo title character : KIRBY
Kirby is the main character in a whole series of video games from Nintendo. Apparently Kirby is one of Nintendo’s most well-known characters. Personally, I had never heard of him before he turned up in a crossword …

56. ___ passu (equably) : PARI
“Pari passu” is Latin for “with an equal step” and is used in the sense of “ranking equally” or “without preference”.

60. ___ wheels : MAG
Mag wheels are often used on racing cars. They are made from a magnesium alloy, giving them their name. But beware, they are flammable and have been banned in many motor-sports in the UK.