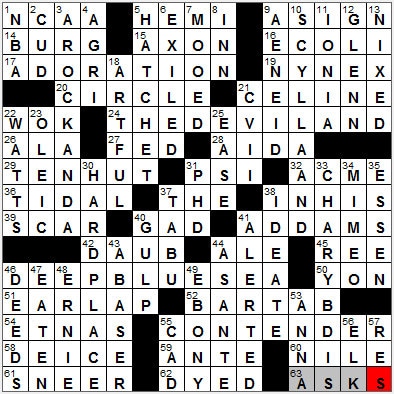 CROSSWORD SETTER: Pawel Fludzinski
THEME: Difficult Things to Be “Between” … all the theme answers are just that, difficult things to be between, according to well-known expressions:


Today’s Wiki-est, Amazonian Googlies
Across
1. Indianapolis-based sports org. : NCAA
The National Collegiate Athletic Association (NCAA) dates back to the Presidency of Theodore Roosevelt. When his son broke his nose playing football at Harvard, President Roosevelt turned his attention to the number of serious injuries and even deaths occurring in college sports. He instigated meetings between the major educational institutions leading to the formation of the Intercollegiate Athletic Association of the United States (IAAUS) in 1906, which was given the remit of regulating college sports. The IAAUS became the NCAA in 1910.

5. ___ engine : HEMI
“Hemi” is short for “hemisphere”, and is the name given to an internal combustion engine with hemispherical combustion chambers. Chrysler is famous for using Hemi engines in many of its models.

14. Hamlet : BURG
“Burg” is an informal term used in the US for a town, from the German word “burg” meaning a fortified city.

A hamlet is a small village, especially one without a church apparently.

15. Impulse carrier : AXON
A nerve cell is more correctly called a neuron, and the long nerve fiber that is part of a neuron is called the axon.

16. Strand in the water? : E COLI
Escherichia coli (E. coli) are usually harmless bacteria found in the human gut, working away quite happily. However, there are some strains that can produce lethal toxins. These strains can make their way into the food chain from animal fecal matter that comes into contact with food designated for human consumption.

19. Former Baby Bell : NYNEX
After the break up of AT&T in 1984, the former AT&T subsidiaries New York Telephone and New England Telephone got together to form NYNEX, a new company providing telephone service in the northeast of the country. The name NYNEX comes from New York (NY) New England (NE) Exchange (X). NYNEX is no more, as it was swallowed up by Verizon.

21. Dion who didn’t sing with the Belmonts : CELINE
French-Canadienne singer Celine Dion first came to international attention when she won the 1988 Eurovision Song Contest, representing Switzerland in the competition that was hosted in Dublin, Ireland.

Perhaps the biggest hits for Dion and the Belmonts were “A Teenager in Love” and “The Wanderer”.

22. It has a round bottom : WOK
“Wok” is a Cantonese word, the name of the frying pan now used in many Asian cuisines.

24. With 37-/46-Across, difficult things to be “between” : THE DEVIL AND
37. See 24-Across : THE
46. See 24-Across : DEEP BLUE SEA
There doesn’t seem to much certainty about the origins of the phrase “between the Devil and the deep blue sea”, but what is certain is that the expression used to be simply “between the Devil and the deep sea”, with the “blue” being added more recently.

26. Its state flower is the camellia: Abbr. : ALA
The Cammelia is indeed the state flower of Alabama, but “the Camellia City” is Sacramento, the state capitol of California.

28. Hit Broadway musical set partly in a tomb : AIDA
The rock musical “Aida” is based on Giuseppe Verdi’s original opera. It premiered in 1998 and is still performed today. Music is by Elton John and lyrics are by Tim Rice.

36. Like some almanac data : TIDAL
A nautical almanac is a book used by navigators, usually at sea. The main content has traditionally been tables of star position designed to help determine one’s geographical position. Some almanacs also include tide tables.

38. “… whole world ___ hands” : IN HIS
“He’s Got the Whole World in His Hands” is an American spiritual. The song was first published in 1927, and gained popularity in 1958 when English singer Laurie London released a version that topped the charts on both sides of the Atlantic. London was only 13 years old when he had that number one hit.

40. Flit : GAD
“To gad about” is to move around with little purpose. The word comes from the Middle English “gadden” meaning “to hurry”.

41. Morticia or Uncle Fester : ADDAMS
Chas Addams was a cartoonist. He didn’t draw a cartoon strip, but rather individual cartoons, although many of his cartoons did feature regular characters. His most famous characters were the members of the Addams Family, who were published in single-panel cartoons between 1938 and 1988 in “The New Yorker”. The Addams Family moved onto the small and big screens starting in 1964.

42. Apply roughly : DAUB
“To daub” is to coat a surface with something thick and sticky, like say plaster or mud.

44. Something that’s not hard to drink? : ALE
Ale is not hard liquor.

And the answer is … a well!

51. Cap add-on : EARLAP
Earlaps (or ear flaps) might be attached to a cap.

54. Old lab burners : ETNAS
Etna (after the volcano) is another name for the Bunsen Burner used in the laboratory.

60. 28-Across locale : NILE
Depending on definition, the Nile is generally regarded as the longest river on the planet. The Nile forms from two major tributaries, the White Nile and the Blue Nile, which join together near Khartoum, the capital of Sudan. From Khartoum the Nile flows north, traveling almost entirely through desert making it central to life for the peoples living along its length.

6. Like Napoleon : EXILED
Napoleon was sent into exile twice. A coalition of European powers sent him to the island of Elba in Tuscany in 1814, only for him to escape after a year and return to power. After Wellington defeated him at Waterloo, Napoleon was dispatched to the British-owned island of St. Helena in the South Atlantic where he spent the last six years of his life.

9. Source of the line “Each of us bears his own Hell” : AENEID
“The Aeneid” is Virgil’s epic poem that tells of the journey of Aeneas, a Trojan who traveled to Italy to become the ancestor of all Romans.

10. With 33-Down, difficult things to be “between” : SCYLLA AND
33. See 10-Down : CHARYBDIS
Charybdis was a a beautiful naiad, a water nymph of Greek mythology. Zeus became enraged with Charybdis and turned her into a sea monster. In Greek myth, the monstrous form of Charybdis lay at one side of a narrow channel of water, with another sea monster, Scylla, lying at the other. Sailors found it impossible to navigate the channel as getting to a safe distance from one monster left them in the clutches of the other. From this tale arose the expression “between Scylla and Charybdis” meaning having two choices, neither of which is a good one.

11. Ancient land SE of Lesbos : IONIA
The geographic region called Ionia is located in present day Turkey. Ionia was prominent in the days of Ancient Greece although it wasn’t a unified state, but rather a collection of tribes. The tribal confederacy was more based on religious and cultural similarities than a political or military alliance. Nowadays we often refer to this arrangement as the Ionian League.

Lesbos is a Greek island in the northeast of the Aegean Sea. The Greek poet Sappo came from Lesbos, and she was a woman noted for her powerful emotional poems directed towards other females. It is because of the writings of Sappho from Lesbos that we have our word “lesbian”.

12. Close in Hollywood : GLENN
Glenn Close a wonderful actress who has played many varied roles, but is well known for her portrayals of less than wholesome characters. She play the crazy Alex Forrest in “Fatal Attraction”, and Cruella de Vil in “101 Dalmatians”. Now she has a regular role on a TV show called “Damages”. Glenn Close is an avid fan of the New York Mets, and regularly sings the national anthem before games.

13. Overruled : NIXED
The use of “nix” as a verb, meaning “to shoot down”, dates back to the early 1900s. Before that “nix” was just a noun meaning “nothing”. “Nix” comes from the German “nichts”, which also means “nothing”.

The oft-quoted “Veni, vidi, vici” (“I came, I saw, I conquered”) is believed by many to have been written by Julius Caesar. The words date back to 47 BC and refer to the short war between Rome and Pharnaces II of Pontus.

23. Kind of acid : OLEIC
Oleic Acid is a fatty acid, found in many animal and plants sources, but most notably in olives. As such, “Oleic” means “derived from the olive”.

25. What Fred Astaire danced with : EASE
As you may well know, Fred Astaire’s real name was Frederick Austerlitz. Fred was from Omaha, Nebraska and before he made it big in movies, he was one half of a celebrated music hall act with his sister, Adele. The pair were particularly successful in the UK and Adele ended up marrying into nobility in England, taking the name Lady Charles Cavendish.

31. Ultimate degree? : PHD
PhD is an abbreviation for “philosphiae doctor”, Latin for “teacher of philosophy”.

34. Old copier : MIMEO
A mimeograph is a cheap printing press that applies ink to paper through a stencil wrapped around a rotating drum. Mimeographs are still around, but have largely been replaced by offset printers and photocopiers.

35. City north of Bonn : ESSEN
I knew a man back in Ireland, a German national from the city of Essen. He had very sad tales to tell from the days of WWII. As a young boy he lost his (socialist) parents during the Nazi purges early in the war. In 1943 he was living with his grandmother and still attending school when he was drafted into the army along with the rest of his class (at 14 years of age). His platoon leader was his school teacher who made a point of tutoring the boys in place of military drilling. One day he was on guard duty with his class/platoon at the dam above the city, and along come the Dam Busters with their bouncing bombs. The raid was successful (from the perspective of the Allies), but he described terrible famine faced by the people below the dam due to flooding of the farmland that surrounded the factories.

After WWII, Bonn was chosen as the capital of West Germany, a choice promoted by Chancellor Konrad Adenauer who was from the area. After German reunification, the capital was moved to Berlin.

37. “The forbidden fragrance” : TABU
Tabu was a whole line of cosmetics and perfumes produced by the House of Dana. The company’s brand names were purchased by a Florida company called Dana Classic Fragrances in 1999.


47. Like victuals : EATEN
“Victuals” is a term for food that is fit for consumption. We tend to pronounce “victuals” as “vittles”, and we use the term “vittles” and “victuals” interchangeably.

48. Orange TV character : ERNIE
I’ve always believed that the “Sesame Street” characters Bert and Ernie were named after two roles played in the Christmas classic “It’s a Wonderful Life”. In the movie, the policeman’s name is Bert and his taxi-driving buddy is named Ernie. However, the “Sesame Street” folks have stated that the use of the same names is just a coincidence.

53. Tolstoy heroine : ANNA
I have to admit to not having read Tolstoy’s novel “Anna Karenina”, but I did see the excellent 1977 British television adaptation starring Nicola Pagett. Most regard the 1935 film starring Greta Garbo in the title role as the definitive big screen adaptation of the novel.

56. Utah state animal : ELK
The elk (also known as the wapiti) is the one of the largest species of deer in the world, with only the moose being bigger. Early European settlers were used to seeing the smaller red deer back in their homelands, so when they saw the “huge” wapiti they assumed it was a moose, and gave it the European name for a moose, namely “elk”. The more correct term then is “wapiti”, the Shawnee name for the animal, which means “white rump”. It’s all very confusing …