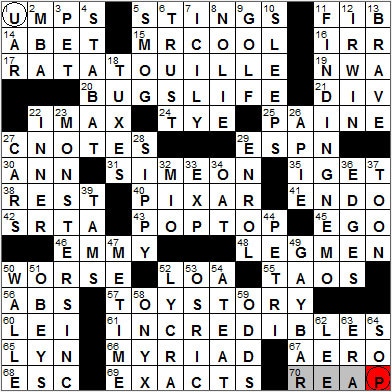 CROSSWORD SETTER: Caleb Madison
THEME: PIXAR Movies … the theme answers are all movies released by Pixar, including the first and last letters in the grid which are circled, giving “UP”:


Today’s Wiki-est, Amazonian Googlies
Across
14. Case the place for, say : ABET
The word “abet” comes into English from the Old French “abeter” meaning “to bait” or “to harass with dogs” (it literally means “to make bite”). This sense of encouraging something bad to happen morphed into our modern usage of “abet” meaning to aid or encourage someone in a crime.

” is a 2007 animated film produced by Pixar. The hero of the piece is Remy, a rat whose ambition is to become a chef. Remy was voiced by stand-up comedian Patton Oswalt

19. “Straight Outta Compton” rap group : NWA
NWA was a hip hop group from Compton, California. The original five group members included rappers who have made a name for themselves as solo acts, including: Dr. Dre and Ice Cube.

” is a 1998 animated feature film from Pixar. The storyline is based on the film “The Seven Samurai” and the fable of “The Ant and the Grasshopper”.

21. League unit: Abbr. : DIV
A league can be divided into divisions.

22. Big picture? : IMAX
The IMAX Corporation, which is behind the IMAX film format, is a Canadian company. The impetus for developing the system came after Expo ’67 in Montreal. Back then large format screenings were accomplished using multiple projectors with multiple screens, with images basically stitched together. The team behind the IMAX technology set out to simplify things and developed a single-camera, single-projector system.

25. Thomas who was “a corsetmaker by trade, a journalist by profession and a propagandist by inclination” : PAINE
Thomas Paine was an English author who achieved incredible success with his pamphlet “Common Sense” published in 1776 which advocated independence of colonial America from Britain. Paine had immigrated to the American colonies just two years before his pamphlet was published, and so was just in time to make a major contribution to the American Revolution.

27. Benjamins : C-NOTES
Benjamin Franklin is featured on one side of the hundred-dollar bill, and Philadelphia’s Independence Hall on the other side. There is a famous “error” in the image of Independence Hall. If you look closely at the clock face at the top of the building you can see that the “four” is written in Roman numerals is “IV” as perhaps one might expect. However, on the actual clock on Independence Hall, the “four” is denoted by “IIII”.

29. “Pardon the Interruption” presenter : ESPN
ESPN is the Entertainment Sports Programming Network, a cable network that broadcasts sports programming 24 hours a day. It was launched back in 1979.

30. Barack Obama’s mother : ANN
Barack Obama, Sr. was first married at the age of 18 in his home country of Kenya, and had two children during that marriage. He left his wife and children back in Kenya when he enrolled in the University of Hawaii in 1959 as the school’s first African foreign student. There Obama met Ann Dunham in a Russian language course. The two entered into a romantic relationship and Dunham became pregnant. Obama told Dunham that he was divorced from his first wife (not true), and the pair were married on Maui in 1961. Six months later Barack Obama II was born, destined to be come the 44th President of the United States. Soon after the birth of their child, Ann Dunham moved with their son to Seattle, Washington. The couple were divorced in 1964.

31. San ___ (Hearst castle) : SIMEON
If you’re ever driving along the Central Coast of California, don’t forget to save a few hours to tour Hearst Castle, the estate that used to belong to the newspaper magnate William Randolph Hearst. It is located near San Simeon.

40. Company whose movies, not counting sequels, are all included in this puzzle [Circled Squares (UP): 2009] : PIXAR
Pixar Animation Studios started out as part of Lucasfilm in 1979, George Lucas’s production company. Lucas sold what was to become Pixar to Apple CEO Steve Jobs in 1986. Pixar produced its first feature film in 1995, the fabulous “Toy Story”, and followed it with a string of hits. The company was then sold again, to Walt Disney in 2006, when valued at $7.4 billion. That transaction resulted in Steve Jobs becoming the single largest shareholder in the Walt Disney Company.

” is the tenth movie released by Pixar studios, featuring wonderful animation as we have come to expect from Pixar. The film earned itself two Academy Awards. The main voice actor is Ed Asner

, whose animated persona as Carl Fredricksen was created to resemble Spencer Tracy in his last film, “Guess Who’s Coming to Dinner”.

41. Prefix with -therm : ENDO-
An endotherm is an organism that generates heat internally. Humans are endotherms.

43. Can feature : POP-TOP
I think that pop-top refers to a whole family of designs for opening the top of a soda can. The oldest method is the pull-tab, or ring pull, invented in Canada in 1956. The design was long-lived but it had its problems, so the world heaved a sigh of relief with the invention of the stay-on-tab in 1975. The new design led to less injuries and eliminated all those used pull-tabs that littered the streets.

46. Daytime ___ : EMMY
The Emmy Awards are the television equivalent of the Oscars in the world of film, the Grammy Awards in music and the Tony Awards for the stage. Emmy Awards are presented throughout the year, depending on the sector of television being honored. The most famous of these ceremonies are the Primetime Emmy Awards and the Daytime Emmy Awards. The distinctive name of “Emmy” is a softened version of the word “immy”, the nickname given to the video camera tubes found in old television cameras.

48. Reporters on the scene : LEGMEN
“Legman” is an informal term for a reporter whose job it is to get information from the scene of an event.

52. Mauna ___ : LOA
Mauna Loa on the “big island” of Hawaii is the largest volcano on the planet (in terms of volume, not height). The name “Mauna Loa” is Hawaiian for “Long Mountain”.

60. Island garland : LEI
“Lei” is the Hawaiian word for “garland, wreath”, although in more general terms a “lei” is any series of objects strung together as an adornment for the body.

” is a 2004 animated feature from Pixar, not a great movie if you ask me. But asking me probably isn’t a good idea, as the film won two Oscars …

was a soul singer who worked a lot with James Brown. Her best-known song is “Think(About It)”, released in 1972.

67. Prefix with postale : AERO-
Aéropostale was a French aviation company founded in 1918 in Toulouse. When Aéropostale was founded, its focus was to be carrying mail, hence the name. The Aéropostale clothing retailer takes its name from the airline.

Down
1. Onetime realm of Nasser: Abbr. : UAR
The UAR, United Arab Republic, was a union between Egypt and Syria, made in 1958 and dissolved in 1961 when Syria pulled out of the arrangement.

4. “___ Mater” (hymn) : STABAT
There are two hymns that can be referred to as “Stabat Mater”, namely “Stabat Mater Dolorosa

”. The former translates as “Sorrows of Mary”, and is the most famous of the pair.

5. Unwanted cloud : SMOG
“Smog” is of course a portmanteau word formed by melding “smoke” and “fog”. The term was first used to describe the air around London in the early 1900s.

” is a 2003 animated blockbuster from Pixar. It was the winner of the Oscar that year for Best Animated Feature. Believe it or not, “Finding Nemo” is the best-selling DVD of all time and, until 2010’s “Toy Story 3”, it was the highest-grossing G-rated movie at the box office.

was a wildlife expert and TV personality from Australia who was known as the Crocodile Hunter. Sadly, Irwin died in 2006 at only 44 years of age, having been stung in the chest by a stingray.

” is the latest film from Pixar studios, and one that I might just go see. There is a great cast of voice actors that includes the lovely Kelly Macdonald, Julie Waters, Billy Connelly, Emma Thompson, Craig Ferguson and Robbie Coltrane. As you might guess from that cast, the story is set in Scotland, in the highlands in the tenth century.

18. Fancy duds : TUXES
The style of men’s evening dress called a “tuxedo” was apparently first worn to a country club event in 1886 in New York. The use of a dark dinner jacket without tails became fashionable at the club with the members, and the tradition spread from there. The country club was located in Tuxedo Park, New York, giving the style of dress its name.

” was released in 2001, and was Pixar’s fourth full-length movie. It’s about cute monsters, that’s all I know, other than that the voice cast included the likes of John Goodman, Billy Crystal and Steve Buscemi.

” is a 2006 animated feature from Pixar. The great cast of voice actors includes Paul Newman in his last movie role before he passed away in 2008.

34. Cheerios grain : OAT
Cheerios breakfast cereal has the distinction of being the first oat-based cereal introduced into the market, in 1941. Back then it was called CheeriOats.

37. Any 40-Across character : TOON
The word “cartoon” was originally used for a “drawing on strong paper”, a durable drawing used as a model for another work. The term comes from the French word “carton” meaning “heavy paper, pasteboard”. Cartoons have been around a long time, with some of the most famous having being drawn by Leonardo da Vinci.

is a man’s cap traditionally worn by Scotsmen. “Tams” were originally all blue (and called “blue bonnets”) but as more dyes became readily available they became more colorful. The name of the cap comes from the title character of Robert Burns poem “Tam O’Shanter”.

44. ___ dish : PETRI
Julius Richard Petri was a German bacteriologist and was the man after whom the Petri dish

is named. The petri dish can have an agar gel on the bottom which acts a nutrient source for the specimen being grown and studied, in which case the dish plus agar is referred to as an “agar plate”.

” is a very cute, Pixar movie, released in 2008. The hero of the piece is a robot called WALL-E, who loves his “Hello Dolly”, and who falls in love with another robot called EVE.

52. Wet suit material : LYCRA
What we call spandex in the US is known as Lycra in the British Isles. “Spandex” was chosen as the name for the elastic fiber as it is an anagram of “expands”.

53. “A hit, a very palpable hit” speaker : OSRIC
In William Shakespeare’s play “Hamlet”, Osric is the courtier that Claudius dispatches to invite Hamlet to participate in a duel.

58. Chalcedony variety : ONYX
Onyx is a form of quartz that comes in many different shades, but most often it’s the black version that’s used for jewelry

. The name “onyx” comes from the Greek word for “fingernail”, as onyx in the flesh color is said to resemble a fingernail.

Chalcedony is a mineral, a form of silica.

is rock singer, famously the lead singer of the band Van Halen from Southern California.

63. Pitcher’s stat : ERA
The pitching stat, earned run average (ERA), measures how many runs a pitcher tends to give up per nine innings.