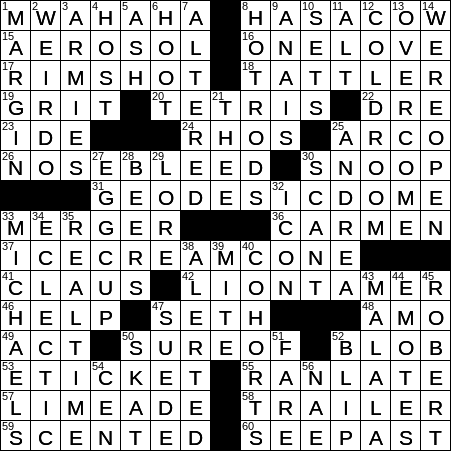 15 What may be propelled by a propellant : AEROSOL

16 Classic song with the lyric “Let’s get together and feel all right” : ONE LOVE

17 Response to a joke : RIMSHOT

20 Game where you don’t want to reach the top : TETRIS

25 Direction to a cellist : ARCO

When Georges Bizet wrote his famous opera “Carmen”, he used the melody of what he thought was an old folk song as a theme in the lovely aria “ Habanera”. Not long after he finished “Carmen” he discovered that the folk song was in fact a piece that had been written by another composer, who had died just ten years before “Carmen” was published. Fittingly, Bizet added a note to the score, declaring the original source.

The Austin Powers character was created by the actor who plays him, namely Mike Myers. Apparently Myers came up with the idea for Powers while listening to the Burt Bacharach song “The Look of Love”.

Gaius Valerius Catullus was a Latin poet active in the days of the Roman Republic.

33 Sportscaster inducted into the Television Hall of Fame in 2013 : MICHAELS

Al Michaels is a sportscaster who worked with NBC Sports for nearly 30 years. Michaels is probably best known for his work on “Monday Night Football” for nearly two decades starting in 1986.

“Cohort” can be used as a collective noun, meaning “group, company”. The term can also apply to an individual supporter or companion, although usually in a derogatory sense. “Cohort” comes from the Latin “cohors”, which was an infantry company in the Roman army, one tenth of a legion.