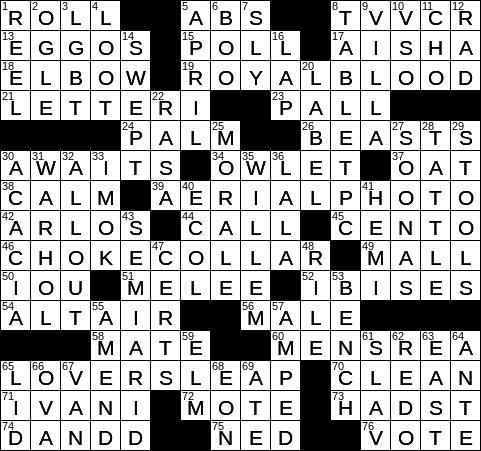 Today’s grid contains a word ladder that takes us from ROLL in the top-left, through CALL in the center, to VOTE in the bottom-right:

In a roll call vote, members of an assembly are called on by name to declare their position on a particular issue. This has the effect of registering each member’s vote for record.

Aisha Tyler is an actor and comedian who was a co-host on “The Talk” for several years starting in 2011. She began hosting the reboot of “Whose Line Is It Anyway?” in 2013.

The word “instigate” starts with a letter I.

The barn owl is the most common species of owl. It is found everywhere in the world, except in desert and polar regions.

“Mens rea” is Latin for “guilty mind” and is a central concept in criminal law. The concept is expanded to “actus non facit reum nisi mens sit rea” meaning “the act does not make a person guilty unless the mind be also guilty”. In other words, a someone should not be deemed guilty of an act, unless he or she had a “guilty mind”, intended to do wrong.

71. First in a line of Russian autocrats : IVAN I

6. Rude response from the bleachers : BOO!

Back in the 16th century, a pigeonhole was a small recess used by pigeons for nesting. Towards the end of the 17th century, the term “pigeonholes” had been borrowed to describe compartments at the back of a writing desk. Two hundred years later, we were using the verb “pigeonhole” figuratively, to mean “label mentally”.

28. Say what someone naughty did : TATTLE

Acacia is a genus of tree and shrub, also known as thorntree, whistling thorn and wattle. The acacia is the primary food source for the giraffe in the wild, with the animal eating the leaves high in the tree, leaves that are inaccessible by competing species. The natural gum from two species of acacia tree is known as gum arabic, which is used in the food industry as a stabilizer.

The most common street name in the US is “Second Street”. “First Street” comes in only at number three, and this is because many cities and towns forego the use of “First” and instead go with “Main” or something more historical in nature. “Elm Street” appears on the list at number fifteen.