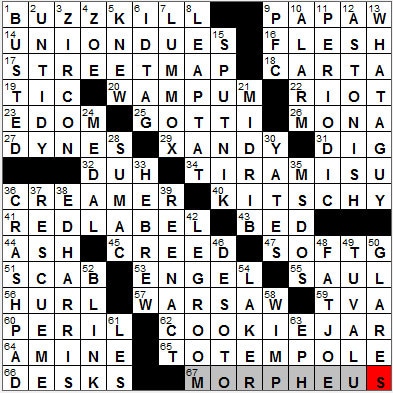 CROSSWORD SETTER: Josh Knapp
THEME: None
COMPLETION TIME: Did not finish!
ANSWERS I MISSED: Too many in the top right!


Today’s Wiki-est, Amazonian Googlies
9. Tree related to the ylang-ylang : PAPAW
The papaw (also “pawpaw”) tree is native to North America and has a fruit that looks similar to a papaya. Papaw probably gets its name from the word papaya, but papaw and papaya are two distinct species.

16. Zombie’s craving : FLESH
A zombie is a corpse that has been brought back to life by some mystical means. Our modern use of the term largely stems from the undead creatures featured in the 1968 horror movie called “Night of the Living Dead”. Now that film, I haven’t seen and probably never will …

18. Tourist buy in Mexico : CARTA
A tourist in Mexico might buy a map (“carta”, in Spanish).

19. Foible : TIC
Originally a “foible” was the weak point of a sword’s blade. The same term came to be used for a weak point in a person’s character.

20. Moolah : WAMPUM
Wampum are sacred shell beads of North American tribes in the Eastern United States. The early European colonists often used wampum to trade with the native peoples. From this original usage, “wampum” came to be a slang term for money.

No one seems to know where the term “moolah” meaning “money” comes from, but it has been around since the 1920s.

22. ___ Act : RIOT
The Riot Act was a British law that was in force from 1715 to 1967. According to the Riot Act, government entities could declare any gathering of twelve or more people “unlawful”. Our expression “read the Riot Act” is derived from the requirement for authorities to read out the Riot Act proclamation to the assembly before they could enforce it.

23. Ancient rival of Judah : EDOM
Edom is an ancient Iron Age kingdom located in the south of modern-day Jordan. The area is known for its red-colored sandstone, which gave the kingdom its name. The Hebrew word “Edom” translates as “red”.

26. “___ Lisa” : MONA
Leonardo da Vinci’s masterpiece that we know in English as the “Mona Lisa” is called “La Gioconda” in Italian, the language of the artist. It’s also known as “La Joconde” by the Government of France which owns the painting and displays it in the Louvre Museum in Paris. The title comes from the name of the subject, almost certainly Lisa Gherardini, wife of Francesco del Giocondo. Giocondo was a wealthy silk merchant in Florence who commissioned the painting for the couple’s new home to celebrate the birth of their second son.

27. Relatives of newtons : DYNES
Dynes and newtons are both units of force. The newton is of course named for Sir Isaac Newton, the English physicist and mathematician.

34. Literally, “pick me up” : TIRAMISU
Tiramisu is an Italian cake. The name “tiramisu” translates from Italian as “pull me up”.

40. Too cute, say : KITSCHY
“Kitsch” is a German word, an adjective that means “gaudy, trash”.

41. Johnnie Walker blend : RED LABEL
Johnnie Walker is the most widely distributed brand of scotch whisky in the world, originating in Kilmarnock in Scotland. Johnnie Walker was a grocer who sold whisky out of his shop in Kilmarnock up until he died in 1857. It was Johnnie’s son and grandson who developed the brand and who are responsible for its popularity.

44. Parliament’s end? : ASH
The Parliament brand of cigarettes has been produced by Philip Morris, since 1931.

45. Dogma : CREED
A dogma is a set of beliefs, with the plural being “dogmata”.

51. One crossing a line : SCAB
We first started calling strikebreakers “scabs” in the early 1800s, and before that a scab was a person who refused to join a trade union (back as early 1777). The word probably comes from the use of “scab” as a skin disease, and so is a term that is meant to insult.

55. King who consulted the Witch of Endor : SAUL
According to the First Book of Samuel, the Witch of Endor called up the ghost of the deceased Samuel at the behest of Saul, the first King of the Israelites. Endor was a city in the land of Canaan.

57. “The Pianist” setting : WARSAW
The name “Warsaw” in Polish means “belonging to Warsz”. Legend has it that Warsz, was a fisherman who fell in love with a mermaid called Sawa. It’s a nice story, but actually Warsz was a nobleman from the 12th or 13th century who owned a local village.

“The Pianist” is a memoir of Wladydslaw Szpilman, a Polish musician of Jewish heritage and a survivor of the Holocaust. The memoir was not written by Szpilman himself, but by author Jerzy Waldorff who interviewed him, and became his friend. The memoir was first published in 1946 in Poland under the title “Death of a City”, but lay unnoticed for decades. It was republished in English in 1998 under the title “The Pianist”, and became widely read. Roman Polanski then directed a 2002 screen version using “The Pianist” as a title. Sadly, Szpilman died during the making of the film and never saw the great success the movie achieved, including three Academy Awards.

59. Knoxville-based org. : TVA
The Tennessee Valley Authority (TVA) has to be one of America’s great success stories when it comes to economic development. Created in 1933, the TVA spearheaded economic development in the Tennessee Valley at the height of the Great Depression. Central to the success was the federally-funded construction of flood-control and electricity-generation facilities.

64. Serotonin, e.g. : AMINE
Most of the body’s serotonin is found in the gut, where it regulates intestinal muscle movement. The balance is manufactured in specialized nerve tissue and has various functions such as regulation of mood, sleep and appetite.

65. Hierarchy : TOTEM POLE
Totem is the name given to any entity that watches over a group of people. As such, totems are usually the subjects of worship. So, “totem poles” are really misnamed, as the poles are not intended to represent figures to be worshiped, but rather are heraldic in nature often celebrating the legends or notable events in the history of a tribe.

Down
3. December birthstone : ZIRCON
Zircon is the name of the mineral with the chemical name of zirconium silicate. Zircon comes in many colors, and colorless specimens that are of gem quality are often used as a substitute for diamonds.

4. Actress Caldwell : ZOE
Zoe Caldwell is an Australian-born actress who won four Tony Awards for her performances on Broadway.

7. Foozler : LUMMOX
The word “lummox” comes from East Anglian slang (northeast of London). It is probably a contraction of “lumbering ox”.

“To foozle” means to bungle, and in particular to make a poor golf stroke.

15. Traveler in 1957 news : SPUTNIK
The Soviet Union launched the Sputnik satellite towards the end of 1957, a development that shocked the establishment in the US. Within months, President Eisenhower made his move, creating the Advanced Research Projects Agency (ARPA, now DARPA) and the National Aeronautics and Space Administration (NASA).

28. Tree whose leaves were once smoked by Indians : SUMAC
Sumacs are a group of flowering shrubs and small trees that includes Poison oak, Poison ivy and Poison sumac. Nasty stuff …

30. David who directed the final four Harry Potter films : YATES
David Yates is an English film director, most famous now for having directed the last four of the “Harry Potter” movies. However, he was also responsible for the outstanding 2003 TV political thriller series “State of Play” and excellent made-for-TV drama “”The Girl in the Café”.

35. Operations were once commonly performed in this : MS-DOS
MS-DOS was the main operating system used by IBM-compatible PCs in the eighties and for much of the nineties.

38. “Apollo 13” actor : ED HARRIS
Ed Harris is a very talented actor, noted for two great performances in movies about the Space Program. He played John Glenn in “The Right Stuff” in 1983, his “breakthrough” role. Twelve years later he made a stellar performance as the flight director Gene Kranz in “Apollo 13”.

“Apollo 13” is a great film, and supposedly one that is historically and technically accurate. The film is an adaption of mission commander Jim Lovell’s book “Lost Moon: The Perilous Voyage of Apollo 13”. I am going to have to put that book on my Christmas list …

46. Old Chrysler make : DESOTO
The DeSoto brand of car was built by Chrysler from 1928 to 1961. The line was named after the Spanish explorer and conquistador, Hernando de Soto, widely reported as the first European to have crossed the Mississippi River (although Cabeza de Vaca had at least discovered one of the mouths of the Mississippi twenty years earlier).

48. “All or Nothing” rapper, 2005 : FAT JOE
Fat Joe is the stage name of rapper Joseph Cartegena from the Bronx in New York City. Fat Joe’s name reflects his body size, although he lost almost 90 pounds in 2011, dropping his weight from a high of 350 pounds.

49. Second-smallest member of the United Nations, by population : TUVALU
Tuvalu is a Polynesian island nation that was formerly called the Ellice Islands. Tuvalu lies midway between Hawaii and Australia. It is the third least populous sovereign state in the world with under 11,000 inhabitants, ahead of Vatican City and Nauru.

54. Staples Center player : LAKER
The Los Angeles Lakers basketball team started out in 1947 in Minneapolis, Minnesota. The team chose the Lakers name in honor of the nickname of Minnesota, “Land of 10,000 Lakes”. The Lakers moved to Los Angeles in 1960.

61. Article in L’Express : LES
“L’Express” is a weekly news magazine published in France. “L’Express” first hit the newsstands in 1953.

63. Book before Phil. : EPH
It seems that the Epistle of Paul to the Ephesians is now regarded by scholars as written “in the style of Paul” by someone who was influenced by Paul’s thought.