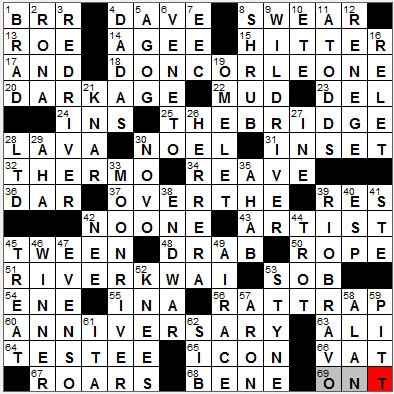 CROSSWORD SETTER: Peter A. Collins
THEME: “A River Runs Through It” … if you take the first letters of the across clues there’s an allusion to the theme of the puzzle, namely “THE ROBERT REDFORD FILM A RIVER RUNS THROUGH IT

”. Then several answers in the grid are films featuring the word “river” or “rio”:

1D. With 59-Down, star of the work revealed by the first letters of the Across clues, which hint at this puzzle’s theme : BRAD
59D. See 1-Down : PITT

is a very humorous guy, an author and columnist. Barry also plays lead guitar in a rock band called The Rock Bottom Remainders, which includes such celebrities as Stephen King, Amy Tan and Scott Turow.

13. Richard ___ (anonymous name in court cases) : ROE
Though the English court system does not use the term today, John Doe first appeared as the “name of a person unknown” in England in 1659, along with another unknown, Richard Roe. Joe Blow is just a variant of John Doe, and Jane Doe is an unknown female.

was a Major League Baseball player who played mainly with the Indians, White Sox and Mets. He was one of the “Amazin’ Mets”, and was famous for making two phenomenal catches in game three of the 1969 world series, potentially saving five runs.

18. Ruthless figure in “The Godfather” : DON CORLEONE
Marlon Brando won the Oscar for Best Actor for his portrayal of Vito Corleone in the 1972 blockbuster “The Godfather”. He turned down the award and didn’t attend the ceremony. Instead he sent a Native American rights activist called Sacheen Littlefeather who made a speech protesting the depiction of Native Americans in Hollywood movies. Brando wasn’t the first person to refuse an Oscar. George C. Scott did the same thing when he won for playing the title role in 1970’s “Patton”. Scott just didn’t like the whole idea of “competing” with other actors.

23. East Coast state: Abbr. : DEL
The state of Delaware takes its name from Virginia’s first colonial governor, Englishman Thomas West, 3rd Baron De La Warr. Delaware is known as the First State as it was the first to ratify the US Constitution, in 1787.

” is a novel by Pierre Boulle, the basis of the screenplay for the award -winning film “The Bridge on the River Kwai

is the son of British actor Rex Harrison, and is an actor as well. Noel is also a singer, as well as an Olympic athlete having competed in the 1952 and 1956 Winter Olympics as a giant-slalom skier.

32. “Fax” prefix : THERMO-
Themofax is a brand name owned by 3M, describing a technology for producing photocopiers and faxes. In the Thermofax process the image is produced by selectively exposing parts of the copy paper to heat.

34. Illegally take, old-style : REAVE
“To reave” is to seize and carry off, an archaic term.

42. Ray Charles hit of 1963 : NO ONE
Ray Charles came up with his stage name by dropping his family name from his real moniker, Ray Charles Robinson. Ray’s life was a wild ride, well represented in the excellent biopic called “Ray

” released in 2004 and starring Jamie Foxx in the title role. Ray was married twice, and fathered 12 children with nine different women. As I said, a wild ride …

43. Ingres or Renoir : ARTIST
Jean August Dominique Ingres was a French painter, most famous for his portrait work.

Pierre-Auguste Renoir was a French painter, very much at the forefront of the Impressionist Movement. Renoir was a prolific artist, with several thousand works attributed to him. The largest collection of Renoirs is actually in the United States. You can see 181 of his paintings at the Barnes Foundation just outside Philadelphia.

45. Verger on adolescence, informally : TWEEN
The term “tween” is now used to describe preadolescence, the years between 10 and 12 years of age.

50. Riata, e.g. : ROPE
A riata is another name for a lariat or a lasso. So a riata is a rope with a noose on the end that can be thrown from a horse, usually to catch some animal. “Riata” comes from “reata”, the Spanish word for lasso.

63. Ring leader? : ALI
Cassius Marcellus Clay, Jr. was born in 1942 in Louisville, Kentucky. Clay changed his name to Muhammad Ali when he converted to Islam in 1964. Who can forget Muhammad Ali lighting the Olympic flame for the 1996 games in Atlanta? Ali was presented with a gold medal during those ’96 Games, a replacement for the medal he won at the 1960 Olympics. He had thrown the original into the Ohio River as a gesture of disgust after being refused service at a “whites only” restaurant.

69. Toronto’s prov. : ONT
The Canadian province of Ontario takes its name from the Great Lake. In turn, Lake Ontario’s name is thought to be derived from “Ontari:io”, a Huron word meaning “great lake”. Ontario is home to the nation’s capital, Ottawa, as well as Toronto, Canada’s most populous city (and capital of the province).

Down
1. With 59-Down, star of the work revealed by the first letters of the Across clues, which hint at this puzzle’s theme : BRAD
(59. See 1-Down : PITT)
“A River Runs Through It

” is a 1992 film based on the novella of the same name published in 1976 by Norman Maclean. The movie was directed by Robert Redford and stars Brad Pitt among others.

2. Novelist Jaffe : RONA
Rona Jaffe was an American novelist perhaps most famous for two of her books, “The Best of Everything” and “Mazes and Monsters”. “The Best of Everything” was published in 1958 and has been compared with the HBO television series “Sex and the City” as it depicts women in the working world. “Mazes and Monsters” was published in 1981 and explores a role-playing game similar to Dungeons & Dragons and the impact it has on players.

”, you might remember that “Red River” is the final movie that the Texas town’s cinema shows before closing down.

6. Rome’s Via ___ : VENETO
Via Veneto is (actually Via Vittoria Veneto) is an upmarket street in Rome, the site of many of the pricier hotels. It was made famous in Frederico Fellini’s “La Dolce Vita”, and is still the home to Harry’s Bar and Café de Paris, both featured in the movie.

9. 1960 Elia Kazan film : WILD RIVER
Elia Kazan won Oscars for best director in 1948 for “Gentleman’s Agreement” and in 1955 for “On The Waterfront”. In 1999 he was given an Academy Lifetime Achievement Award. He also directed “East of Eden”, which introduced James Dean to movie audiences, and “Splendor in the Grass”, which included Warren Beatty in his debut role.

10. Season under le soleil : ETE
One might spend the summer (été) under the sun (le soleil).

12. Fail to do as promised : RENEGE
To renege on something is to back out of it. It’s a word commonly used in card games like bridge and whist. A renege is when a player doesn’t follow suit, even though there may be a card of the suit led in his/her hand.

19. Denver ___ : OMELET
A Denver omelet (or omelette) is also known as a Southwest omelet or a Western omelet. The usual ingredients include diced ham, onions and green bell peppers.

26. Designer Carolina ___ : HERRERA
Carolina Herrera is a fashion designer. Herrera lives and works in the US although is originally from Venezuela.

27. Suffix with Benedict : -INE
A member of the Benedictine Order is a monk who follows the precepts laid down for religious life by St. Benedict of Nursia. The Benedictine “way” is a moderate path, considered neither zealous nor institutionally formulaic.

28. Inc., overseas : LTD
In Britain and Ireland the most common type of business (my perception anyway) is one which has private shareholders whose liability is limited to the value of their investment. Such a company is known as a private limited company, and has the letters “Ltd” after the name. If the shares are publicly traded, then the company is a public limited company, and has the letters “plc” after the name.

30. Porto-___ (capital of Benin) : -NOVO
Porto-Novo is the capital city of Benin in West Africa. Porto-Novo may be the capital of the country but it isn’t the biggest city, and it isn’t even the most economically important. That honor goes to the city of Cotonou.

33. It’s “wider than a mile,” in an old song : MOON RIVER
The lovely song “Moon River” was written by Johnny Mercer and Henry Mancini. It was of course sung by Audry Hepburn in the wonderful 1961 movie “Breakfast at Tiffany’s

”. The song went on to become the theme song for Andy Williams who performed it at the Academy Awards ceremony in 1962.

35. Queequeg’s captain : AHAB
Captain Ahab is the obsessed and far from friendly Captain of the Pequod in Herman Melville’s “Moby Dick”.

Queequeg is a character in Herman Melville’s classic tale “Moby Dick”. Queequeg is the chief harpooner on the boat.

38. Tom Clancy’s ___ (2008 video game) : ENDWAR
I love the Tom Clancy series of novels, most of which feature Jack Ryan as the main character, but I felt that with each successive title my interest faded a little. I was hooked with “The Hunt for Red October” published in 1984, and dutifully worked my through all Clancy’s subsequent novels, before giving up halfway through the 1998 “Rainbow Six”.

” is a Western movie from 1959 directed by the great Howard Hawks. “Rio Bravo” has an impressive cast including John Wayne, Dean Martin, Ricky Nelson, Angie Dickinson and Walter Brennan. The film was made as a “response” to “High Noon” and is considered on one level to be a criticism of McCarthyism and the days of the Hollywood blacklists.

41. Sault ___ Marie : STE
In the summer of 2010 I spent a very interesting afternoon watching ships make their way through the Soo Locks and Soo Canal between Lake Superior and the lower Great lakes. The name “Soo” comes from the US and Canadian cities on either side of the locks, both called Sault Ste. Marie.

was an English songwriter who made a name for himself in America with a series of popular musicals. Styne wrote a number of famous songs including “Don’t Rain on My Parade” from “Funny Girl”, “Diamonds Are a Girl’s Best Friend” and “Everything’s Coming Up Roses” from “Gypsy”.

Arnold Schoenberg was a champion of the use of atonality in music. I admit to having a somewhat closed mind when it comes to atonality, so I have very little of his music in my collection.

58. Author Paton : ALAN
Alan Paton was a South African author and an outspoken opponent of apartheid.