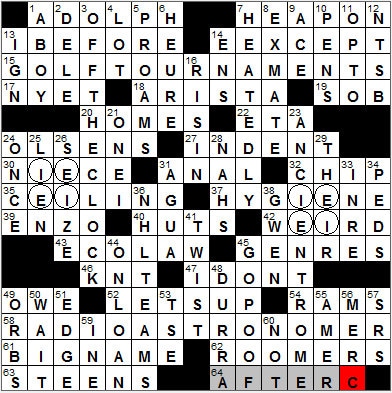 CROSSWORD SETTER: Joe Krozel
THEME: I BEFORE E, EXCEPT AFTER C … there’s a message in the puzzle, that the old grammar rule “I before E, except after C” has many exceptions. The circled letters give us two examples of the rule in action, and two examples where it doesn’t apply:
13A. With 14- and 64-Across, familiar rule not always followed : I BEFORE
14A. See 13-Across : E EXCEPT
64A. See 13-Across : AFTER C


Today’s Wiki-est, Amazonian Googlies
1. Brewer Coors : ADOLPH
Adolph Coors founded the Coors brewing company in 1873, in Golden, Colorado. Coors was originally from the Rhine Province in Prussia, and worked in various brewers around what is today Germany before immigrating to the US in 1868. Despite all of his success as a brewer here in America, Coors ended up taking his own life in 1929, by jumping to his death out of a hotel window.

18. Bygone record label : ARISTA
Arista Records was set up as part of Columbia Pictures by one Clive Davis. He chose “Arista” as it was the name of the New York City Honor Society to which Davis belonged.

20. Adobes and abodes : HOMES
The building material known as adobe has been around a long time, and has been used in dry climates all over the world. The original form of the word “adobe” dates back to Middle Egyptian times, about 2000 BC. The original “spelling” is dj-b-t, and translates as mud (sun-dried) brick.

24. Twins sharing a star on the Hollywood Walk of Fame : OLSENS
I don’t know anything about the Olsen twins, but I am told that folks believe Mary-Kate and Ashley to be identical twins. They look very much alike, but are in fact just fraternal twins.

40. QB calls : HUTS
The quarterback starts each play in football with a “snap” (also called a “hike”). He announces to his teammates the exact moment of the snap by calling out signals, usually including the word “hut” one or more times in a prearranged sequence.

42. ___ Tales, magazine where many H. P. Lovecraft stories first appeared : WEIRD
H. P. Lovecraft was an author of horror, fantasy and science fiction. His books aren’t my cup of tea …

43. Ban on strip mining, e.g. : ECO-LAW
Strip mining is a form of surface mining, a way to exploit underground minerals by stripping away the layers above the ore so that it is exposed to the surface.

63. Some Rijksmuseum holdings : STEENS
Jan Steen was a Dutch painter active in the Dutch Golden Age, the 17th century. HIs most famous work is probably “The Feast of Saint Nicholas”, which you can see at the Rijksmuseum in Amsterdam.

The Rijksmuseum is a national museum in Amsterdam in the Netherlands. The Rijksmuseum features works by such greats as Rembrandt, Vermeer, Frans Hals and Jan Steen.

12. Investigator of many accidents, for short : NTSB
The National Transportation Safety Board is responsible for the investigation of major accidents involving transportation. Included in this broad definition is the transportation of fluids in pipelines. The organization is independent in that it has no ties to other government agencies or departments so that its investigations can be viewed as “impartial”. The NTSB also earns a little money for the US as it hires out its investigation teams to countries who don’t have the necessary resources available on their own soil.

14. Northern extremes? : ENS
The are two letters N at the extremes of the word “northern”.

16. Mr. Mojo ___ (anagrammatic nickname for Jim Morrison) : RISIN’
Jim Morrison was the lead singer for the Doors. Famously, Morrison died at only 27 years of age in Paris. It is thought that his dependence on hard drugs contributed to his demise, although this is disputed. Morrison’s grave site is one of the most-visited attractions in Paris. A kind blog reader pointed out to me that Morrison was also known as “Mr. Mojo Risin'”, which is an anagram of “Jim Morrison”.

23. Subject of a six-volume history by Edward Gibbon : ANCIENT ROME
Edward Gibbon was an English historian who wrote the 6-volume work “The History of the Decline and Fall of the Roman Empire”.

25. Property claim : LIEN
A lien is the right that one has to retain or secure someone’s property until a debt is paid.

36. Stars and others : NHL TEAMS
The Dallas Stars hockey team was founded in 1967, based in Bloomington, Minnesota, and was back then called the Minnesota North Stars. The team moved to Dallas in 1993.

38. Rocker Stefani : GWEN
Gwen Stefani is the lead singer for the rock band No Doubt. She joined the band in 1986, focused on a solo career from 2004-2008, but is now back singing and working with No Doubt.

48. Sorghum variety : DURRA
Sorghum is a species of grass that is cultivated for its grain which is edible. Sorghum is also known as durra or jowari.

53. Literary monogram : TSE
T. S. Eliot was born in New England but grew up in St. Louis, Missouri. Much of his college education was at Oxford, and clearly he became comfortable with life in England. In 1927 he became a British citizen, and lived the rest of life in the UK.

55. Ascap part: Abbr. : AMER
ASCAP (the American Society of Composers, Authors and Publishers) collects licence fees for musicians and distributes royalties to composers whose works have been performed. So does BMI (Broadcast Music Incorporated).

56. Bobcat or Cougar, for short : MERC
The Mercury Bobcat is a rebranded Ford Pinto.

Ford made the Mercury Cougar from 1967 to 2002. The Cougar was originally based on the Ford Mustang, then the Thunderbird, and finally the Contour/Mondeo.

59. Suffix with opal : -INE
Something that is iridescent, like an opal (i.e. opaline), has a lot of lustrous colors. “Iridescent” comes from the Latin word “iris” (“iridis” in the genitive case), the word for “rainbow”.