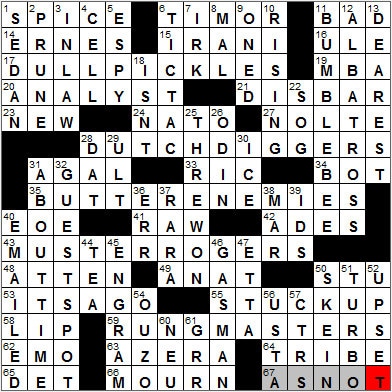 CROSSWORD SETTER: Sharon Delorme
THEME: I Becomes U … the themed answers are well-known expressions with an I changed to a U:


Today’s Wiki-est, Amazonian Googlies
6. Island north of Australia : TIMOR
Timor is an island in Maritime Southeast Asia. The island is politically divided into West Timor, belonging to Indonesia, and the independent state of East Timor. The name “Timor” comes from a Malay word for “east”, and is used as Timor lies at the eastern end of the Lesser Sunda Islands.

14. Maritime raptors : ERNES
The ern (also erne) is also called the white-tailed eagle, and the sea-eagle.

15. Farsi speaker : IRANI
“Farsi” is one of the local names for Persian, an Iranian language.

17. Boring predicaments? : DULL PICKLES (from “dill pickles”)
Often a dill pickle is actually a pickled gherkin, as the gherkin and cucumber are different cultivars within the same species. Here in the US, dill is commonly added to the pickling vinegar or brine, but this wasn’t the case when I used to eat them back in Ireland (I can’t stand dill!). You might see jars labeled as “cornichons”, but they’re gherkins. Cornichon is just the French word for gherkin.

24. Defense acronym : NATO
NATO is the North Atlantic Treaty Organization (or OTAN in French, “l’Organisation du Traité de l’Atlantique Nord”). NATO was founded not long after WWII in 1949, and is headquartered in Brussels, Belgium. The first NATO Secretary General was Lord Ismay, Winston Churchill’s chief military assistant during WWII. Famously, Lord Ismay said the goal of NATO was “to keep the Russians out, the Americans in, and the Germans down.”

27. Nick of “Warrior” : NOLTE
Nick Nolte’s first big film was playing opposite Jacqueline Bisset and Robert Shaw in “The Deep”, released in 1976. Prior to that he had worked as a model, and in fact appeared in a magazine advertisement for Clairol in 1972 alongside fellow model, Sigourney Weaver.

“Warrior” is a 2011 film about martial arts. I am not really into martial arts films, but Nick Nolte did get an Oscar nomination for his role in the movie.

28. Tulip planters, perhaps? : DUTCH DIGGERS (from “ditch diggers”)
We usually associate the cultivation of tulips with the Netherlands, but they were first grown commercially in the Ottoman Empire. The name “tulip” ultimately derives from the Ottoman Turkish word “tulbend” which means “muslin, gauze”.

The world’s first ever speculative “bubble” in the financial markets took place in 1637, when the price of tulip bulbs sky-rocketed out of control. The tulip had been introduced into Europe a few years earlier and demand for tulips was so high that single bulbs were selling for ten times the annual income of a skilled craftsman. The climb in prices was followed quickly by a collapse in the market that was so striking that the forces at play were given the term “tulip mania”. To this day, any large economic bubble may be referred to as “tulip mania”.

31. “I got ___ in Kalamazoo” : A GAL
“I got a gal” are the opening words to the wonderful song “(I’ve Got a Gal in) Kalamazoo”, made famous by Glenn Miller and his Orchestra. Okay, before anyone points it out, I know, the actual opening is:

33. Wrestling’s Flair : RIC
The wrestler Ric Flair’s real name if Richard Fliehr. Perhaps following the lead of his compatriot Jesse Ventura, Flair explored the possibility of running for governor of the state of North Carolina. Dearie, dearie me …

34. Sci-fi sidekick, maybe : BOT
R.U.R. is a play written in Czech by Karel Capek, first produced in 1921. It is a science fiction work and is remembered in part for introducing the world to the word “robot”. The words “automaton” and “android” were already in use, but Capek gave us “robot” from the original Czech “robota” meaning “forced labor”.

35. Strong advocates of margarine? : BUTTER ENEMIES (from “bitter enemies”)
Emperor Louis Napoleon III of France announced a competition to develop a substitute for butter, a substitute that would be more accessible to the lower classes and more practical for the armed forces. In 1869, a French chemist called Hippolyte Mege-Mouries came up with something he called oleomargarine, which was eventually manufactured under the trade name “margarine”. The name “oleomargarine” also gives us our generic term “oleo”.

43. Bring Ebert and Moore together? : MUSTER ROGERS (from “Mister Rogers”)
Roger Ebert co-hosted a succession of film review television programs for over 23 years, most famously with Gene Siskel until Siskel passed away in 1999. Ebert was diagnosed and treated for thyroid cancer in 2002, and since then has undergone a number of surgical procedures. Sadly, he has lost his voice, but continues work as a film critic, focusing these days on the print medium.

Roger Moore is best known in the US for taking on the role of 007 in seven James Bond movies from 1973 to 1985. In my part of the world we remember him playing a very debonair hero called Simon Templar in a TV series called “The Saint” from 1962 to 1969. Moore’s Templar character could very easily have morphed into a great James Bond, but by the time he was offered the part I personally think that he was just a tad too long in the tooth to pull off a credible 007.

50. Poker champ Ungar : STU
Many followers of the game believe that Stu Ungar was the best ever player of Texas hold ’em. Ungar won about $30 million playing cards during his life, yet he died penniless. He was found dead in a Las Vegas motel room in 1998 having passed away from heart failure at 45 years of age, brought on by years of drug abuse.

62. Subgenre of punk : EMO
The musical genre of “emo” originated in Washington D.C. in the 80s, and takes its name from “emotional hardcore”. Not my cup of tea …

63. Hyundai model : AZERA
The Hyundai Azera was the name used worldwide for the model known as the Hyundai Grandeur in its homeland of South Korea. It was produced from 1986 to 1992.

64. One of Israel’s 12 : TRIBE
The Hebrew Bible states that the Israelites are descended from Jacob, and that his twelve sons are the patriarchs of the 12 tribes of Israel.

Down
1. It’s bigger than a coupe : SEDAN
The American “sedan” car, is the equivalent to the British “saloon” car. By definition, a sedan car has two rows of seating, and a separate trunk (boot in the UK), although in some models the engine can be at the rear of the car.

6. “Get a bang out of life!” mint : TIC TAC
Tic Tacs aren’t American candy (as I always mistakenly believed). Tic Tacs are made by the Italian company Ferrero, and were introduced in 1969.

12. Burden, figuratively : ALBATROSS
An “albatross” is sometimes a metaphor for a psychological burden. This usage comes from the poem “The Rime of the Ancient Mariner” by Samuel Taylor Coleridge. In the story, an albatross is following a ship, a sign of good fortune. Then the “ancient mariner” shoots the albatross with a crossbow, an act that will bring a curse on the ship. The other sailors punish the “mariner” by forcing him to wear the dead albatross around his neck.

26. Valhalla V.I.P. : ODIN
In Norse mythology, Odin was the chief of the gods. His wife Frigg was the queen of Asgard and the deity that gave us our English term Friday (via Anglo-Saxon). Odin’s son was Thor, and he gave us the term Thursday.

In Norse mythology, Valhalla (“hall of the slain”) is a gigantic hall in the “world” of Asgard. Asgard and Valhalla are ruled by the god Odin, the chief Norse god.

44. ___ Party : TEA
The famous destruction of tea in Boston Harbor to protest against the Tax Act took place on December 16, 1773. The action was referred to as the “destruction of the tea” for decades, and it wasn’t until 1834 that the term “Boston Tea Party” first appeared in print.

45. Memory trace : ENGRAM
An “engram” is a hypothetical construct, an explanation for the brain’s ability to store memories. The idea is that some biophysical or biochemical changes take place in the brain in response to external stimuli.

47. “At Last” singer James : ETTA
Etta James was best known for her beautiful rendition of the song “At Last”. Sadly, as she disclosed in her autobiography, James lived a life that was ravaged by drug addiction leading to numerous legal and health problems. Ms. James passed away in January 2012 having suffered from leukemia.

51. Engine type : TURBO
A turbocharger is a device that is designed to extract more power out of an internal combustion engine. It does so by increasing the pressure of the air entering the intake. The pressure increase comes from the use of a compressor, which is cleverly powered by the engine’s own exhaust gases.

54. Liqueur similar to Sambuca : OUZO
Ouzo is an aperitif from Greece that is colorless and flavored with anise. It is similar to pastis from France, and also has a flavor like sambuca from Italy.

Sambuca is an Italian liqueur that is flavored with anise. It is often served straight up with three coffee beans floating on the surface. The beans are said to represent health, happiness and prosperity. A more “saucy” representation for the beans is the husband, wife and mistress.

56. Racket org. : USTA
The United States Tennis Association is the national organization governing the sport of tennis in the US.