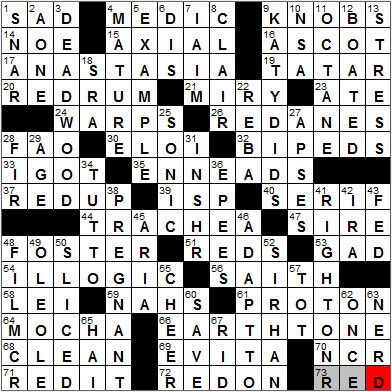 CROSSWORD SETTER: Tracy Gray
THEME: RIGHT ON RED … each of the theme clues has a down answer which turns to the “right” at the letters RED, continuing in an across answer:

” has only three stars in it (three asterisks, that is!). These asterisks first appeared on the poster for the 1970 movie, but they were omitted in the opening titles. The TV series went on to use the asterisks from the poster.

14. San Francisco’s ___ Valley : NOE
Noe Valley is a neighborhood in San Francisco. The area is named after José de Jesús Noé who was the last Mexican mayor of Yerba Buena, which is what San Francisco was called when it was part of Mexico.

15. Kind of skeleton : AXIAL
In a human the axial skeleton consists of those bones which are close to or along the central axis of the body. The axial skeleton includes the bones of the skull, the spine and the rib cage.

is that horrible looking (I think!) wide tie that narrows at the neck, which these days is only really worn at weddings. The tie takes its name from the Royal Ascot horse race, at which punters still turn up in formal wear at Ascot Racecourse in England.

The cravat originated in Croatia, an accessory used with a military uniform. Cravats were introduced to the fashion-conscious French by Croatian mercenaries enlisted into a regiment of the French army. The English placed a lot of emphasis on the knot used for the cravat, and in the period after the Battle of Waterloo the cravat came to be known as a “tie”. What we now call a tie is still called a “cravate” in French.

” is a 1956 historical drama that tells the story of a young French woman who in the 1920s is convinced to pass herself off as the daughter of the murdered Tsar Nicholas II of Russia. The leads in the movie are Ingrid Bergman and Yul Brynner.

19. Siberian native : TATAR
Tatars are an ethnic group of people, mainly residing in Russia (a population of about 5 1/2 million). Actor Charles Bronson had a Tatar heritage. His real name was Charles Buchinsky.

28. ___ Schwarz : FAO
FAO is perhaps the most famous, and is certainly the oldest toy store in the United States. The FAO Schwarz outlet on Fifth Avenue in New York City has been made very famous by Hollywood. For example, in the New York Store you can see that floor piano that was played by Tom Hanks in the movie “Big”.

30. H. G. Wells race : ELOI
In the 1895 novel by H. G. Wells “The Time Machine”, there were two races that the hero encountered in his travels into the future. The Eloi are the beautiful people that live on the planet’s surface, while the Morlocks are a race of cannibals living underground who use the Eloi as food.

35. Supreme Court groupings : ENNEADS
Ennead is the Greek word for “the nine”.

39. EarthLink, e.g., for short : ISP
An Internet Service Provider (ISP) is just what the name indicates, a company that provides its customers with access to the Internet. One way that ISPs differentiate themselves from each other is in the way in which end users are connected to the ISP’s network. So, there are cable ISPs, DSL ISPs, dial-up ISPs and satellite ISPs. I’d go with cable if I were you, if it’s available in your area …

40. Calligraphy detail : SERIF
Serifs are details on the ends of characters in some typefaces. Typefaces without serifs are known as sans-serif (using the French word “sans” meaning “without”). Some people say that serif fonts are easier to read on paper, whereas sans-serif fonts work better on a computer screen. I’m not so sure though …

44. Airway : TRACHEA
The windpipe, or trachea, connects the lungs to the pharynx, the cavity of the mouth. The trachea is lined with special cells that secrete mucus which is then moved upwards by tiny hairs (cilia). The mucus traps dirt and dust particles inhaled with the air and cilia move the mucus contaminant away from the lungs’ delicate air sacs, into the mouth. Cigarette smoke overwhelms the mucus and cilia, so that smoke particles make it all the way into the lungs. Not a good thing …

48. “Camptown Races” composer : FOSTER
“Camptown Races” is a comic song written in African American vernacular dialect. The song was written by Stephen Foster in 1850, and was originally title “Gwine to Run All Night”.

58. Ring of plumerias : LEI
“Lei” is the Hawaiian word for “garland, wreath”, although in more general terms a “lei” is any series of objects strung together as an adornment for the body.

61. Hydrogen has one : PROTON
Hydrogen is a relatively simple element, composed of basically a proton, an electron and no neutrons. Hydrogen is the most abundant element in the universe.

64. Yemeni port : MOCHA
Mocha is a port city in Yemen on the Red Sea, once the principal port for the capital city of Sana’a. Mocha was the major marketplace in the world for coffee until the 1600s, giving the name to the Mocha coffee bean.

69. 1980 Tony Award-winning musical : EVITA
“Evita” was the followup musical to “Jesus Christ Superstar” for Andrew Lloyd Weber and Time Rice. Both of these works were originally released as album musicals, and very successful ones at that (I remember buying them when they first came out). For the original album’s cast of “Evita” they chose Irish singer Colm Wilkinson

(or C. T. Wilkinson, as we know him back in Ireland) to play “Che”, the narrator of the piece.

70. A.T.M. manufacturer : NCR
NCR is an American company that has been in business since 1884, originally called the National Cash Register Company. The company has done well in a market where new technologies seem to be constantly disrupting the status quo.

Down
1. Percussion in a marching band : SNA(RE D)RUM
Snare drums are so called because they have a set of wire strands (called snares) stretched across the bottom surface of the drum. When the drum is struck, the snares vibrate against the bottom drumhead producing a unique sound.

is an actress from New York City, known these days for playing the title role in HBO’s “Temple Grandin”.

10. Code-cracking org. : NSA
The National Security Agency (NSA) was set up in 1952 by President Truman, a replacement for the Armed Forces Security Agency that had existed in the Department of Defense since 1949. The NSA has always been clouded in secrecy and even the 1952 letter from President Truman that established the agency was kept under wraps from the public for over a generation. I really like the organization’s nickname … “No Such Agency”.

11. 89 or 91, maybe : OCTANE
The difference between a premium and regular gasoline is its octane rating. The octane rating is measure of the resistance of the gasoline to auto-ignition, it’s resistance to ignition just by virtue of being compressed in the cylinder. This auto-ignition is undesirable as multiple-cylinder engines are designed so that ignition within each cylinder takes place precisely when the plug sparks, and not before. If ignition occurs before the spark is created, the resulting phenomenon is called “knocking”.

12. Went by sound, perhaps : BOATED
Ships might travel through a sound, a wide channel connecting two bodies of water, or an ocean inlet.

is a country music singer and television actress. McEntire starred in her own sitcom called “Reba” that aired on the WB and the CW cable channels from 2001 to 2007.

27. Some places to pray : APSES
The apse of a church or cathedral is a semicircular recess in an outer wall, usually with a half-dome as a roof and often where there resides an altar. Originally apses were used as burial places for the clergy and also for storage of important relics.

28. Gung-ho : FI(RED) UP
“Kung ho” is a Chinese expression meaning “work together, cooperate”. The anglicized version “gung ho” was adopted by a Major Evans Carlson as an expression of combined spirit for his 2nd Marine Raider Battalion during WWII. From there it spread throughout the Marine Corps and back to America where it persists to this day.

34. All, in music : TUTTO
“Tutti” (singular “tutto”) are pieces of music performed by all the artists in a group, as opposed to “soli” (singular “solo”).

36. Pentathlon equipment : EPEES
The French word for sword is épée. In competitive fencing the épée is connected to a system that records an electrical signal when legal contact is made on an opponent’s body.

41. Legal maneuver … with a hint to answering seven clues in this puzzle : RIGHT ON (RED)
If you’re sitting behind a car that doesn’t make a right on red, it may just be a rental car driven by someone from Europe. Speaking as someone who learned to drive over there, I must admit I held up a few people at red lights when I first visited this country. That’s because in Europe we aren’t allowed to make any move past a red light, unless there is an accompanying green arrow. So, if you’re driving over there, take care …

42. Roth ___ : IRA
Roth Individual Retirement Accounts were introduced in 1997 under a bill sponsored by Senator William Roth of Delaware.

43. Agent of Uncle Sam : FED
The Uncle Sam personification of the United States

was first used during the War of 1812. The “Uncle Sam” term was so widely accepted that even the Germans used it during WWII, choosing the codeword “Samland” to mean “America” in intelligence communiques.

45. What the fat lady sings? : ARIA
“It ain’t over till the fat lady sings” is an American colloquialism. The message is that the outcome isn’t clear until the final whistle, until it’s really, truly over. The reference is to Grand Opera, and the cliched perception that the soprano lead is always overweight.

52. When repeated, 1968 name in the news : SIRHAN
Sirhan Sirhan is the man who was convicted for the assassination of Robert F. Kennedy in 1968. Sirhan continues to serve a life sentence in a prison in California.

57. “Sesame Street” watcher : TOT
Back in 1966, the Carnegie Institute allocated money to study the use of television to help young children prepare for school. The institute gave an $8million grant to set up the Children’s Television Workshop with the task of creating an educational TV program for young people. The program began to come together, especially after Jim Henson (of Muppet fame) got involved. The name “Sesame Street” was chosen simply because it was the “least disliked” of all names proposed just before the program went on the air.