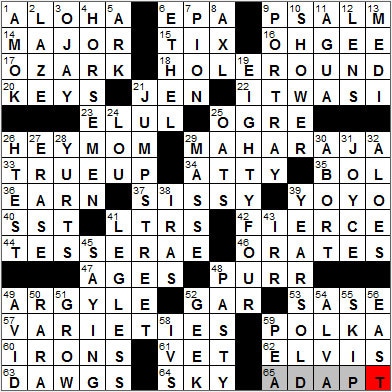 CROSSWORD SETTER: Caleb Emmons
THEME: Number Included … for each of the themed clues, the actual number of the clue is included in the answer:


Today’s Wiki-est, Amazonian Googlies
1. HI hi : ALOHA
“Aloha” has many meanings in English: “affection, love, peace, compassion and mercy”. More recently it has come to mean “hello” and “goodbye”, but only since the mid-1800s.

6. Federal org. issuing standards : EPA
The Environmental Protection Agency (EPA) was set up during the Nixon administration and began operation at the end of 1970.

9. One begins “The king shall joy in thy strength” : PSALM
Psalm 21 in the Bible starts with:

The king shall joy in thy strength, O LORD; and in thy salvation how greatly shall he rejoice!
Thou hast given him his heart’s desire, and hast not withholden the request of his lips.

17. City in Arkansas or county in Missouri : OZARK
The Ozark Mountains aren’t really mountains geographically speaking, and the Ozarks are better described by the alternate name, the Ozark Plateau. It’s not really certain how the Ozarks got their name, but my favorite theory is that the name is the phonetic spelling of “aux Arks”, short for “of Arkansas” in French.

21. “Dawson’s Creek” girl : JEN
The “Dawson’s Creek” television show is what is described as a teen drama. The story revolves around a group of teenagers and follows them through high school and college.

23. Hebrew month : ELUL
Elul is a month in the Hebrew calendar occurring in August-September.

29. Literally, “great king” : MAHARAJA
Maharaja is the Sanskrit word meaning “great king”, and was the name given to a ruler in India. A maharani, or maharanee, was the wife of a maharaja.

34. J.D. holder : ATTY
Juris Doctor is a professional doctorate in the field of law, and is abbreviated to JD.

35. S.A. land : BOL
Bolivia is a landlocked country in South America, bordered by Brazil, Paraguay and Argentina. The land now occupied by Bolivia was originally part of the Inca Empire. The country declared independence from Spain in 1809, which led to 16 years of war. When the Republic was finally named, “Bolivia” was chosen in honor of the Venezuelan-born revolutionary leader, Simón Bolívar.

39. One being put to sleep? : YO-YO
Would you believe that the first yo-yos date back to 500 BC? There is even an ancient Greek vase painting that shows a young man playing with a yo-yo. Centuries later Filipinos were using yo-yos as hunting tools in the 1500s. “Yo-yo” is a Tagalog (Filipino) word meaning “come-come” or simply “return”.

A basic yo-yo trick is to make it “go to sleep”. The idea is to get the yo-yo spinning at the bottom of the extended string, then give it a little jerk so that the yo-yo jumps up the string into the hand.

40. Bygone travel option, informally : SST
The most famous Supersonic Transport (SST) was the Concorde, a plane that’s no longer flying. Concorde had that famous “droop nose”. The nose was moved to the horizontal position during flight to create the optimum aerodynamic shape thereby reducing drag. It was lowered during taxi, takeoff and landing, so that the pilot had better visibility. The need for the droop nose was driven largely by the delta-shaped wings. The delta wing necessitates a higher angle of attack at takeoff and landing than conventional wing designs, so the pilot needed the nose lowered so that he or she could see the ground.

44. Mosaic squares : TESSERAE
A tessera is an individual tile used in making a mosaic.

52. Fish whose name comes from the Old English for “spear” : GAR
The fish known as a gar is very unusual in that it is often found in very brackish water. What is interesting about gar is that their swim bladders are vascularized so that they can actually function as lungs. So many species of gar can be seen coming to the surface and taking a gulp of air. This adaptation makes it possible for them to live in conditions highly unsuitable for other fish that must rely on their gills to get oxygen. Indeed, quite interesting …

53. Autograph collecting aid, for short : SASE
One type of enclosure (ENC) in a letter might be a self-addressed stamped envelope (SASE).

57. Heinz offering : 57 VARIETIES
The Heinz food company is an American concern, based in Pittsburgh, Pennsylvania. The company was founded in 1869, by Henry John Heinz. It was Heinz himself who came up with the marketing slogan of “57 Varieties”. The “57” really doesn’t have any relevance to the range of products available as Heinz chose the “5” because it was his lucky number, and the “7” because it was his wife’s lucky number.

59. Weird Al Yankovic specialty : POLKA
Weird Al Yankovich is famous for his parodies of songs, like “Eat It”, his parody of Michael Jackson’s “Beat It”. Yankovic also takes a lot of popular songs and rearranges them as polkas, such as “Bohemian Polka” which is based on Queen’s “Bohemian Rhapsody”.

61. Do a background check on : VET
The verb “to vet” comes from the term “veterinarian”. The idea is that to “vet” something is to subject it to careful examination, like a veterinarian checking out an animal.

62. 1956 million-selling album : ELVIS
Elvis Aron Presley was the younger of two identical twins. His brother was stillborn, delivered 35 minutes before Elvis. The brother was named Jesse Garon Presley. So though born a twin, Elvis was raised as an only child.

The Cleveland Browns football team was a charter member of the All-American Football Conference, formed in 1946. Cleveland is the only NFL city that has never hosted, and has never sent a team to the Super Bowl.

64. Jupiter’s domain, in myth : SKY
In ancient Rome, Jupiter was the king of the gods, and also the god of sky and thunder. Jupiter was also called Jove.

65. Heed the adage “When in Rome …” : ADAPT
The proverb “when in Rome, do as the Romans do” probably dates back to the days of St. Augustine. St. Augustine wrote a letter around 390 AD in which he states:
When I go to Rome, I fast on Saturday, but here [Milan] I do not. Do you also follow the custom of whatever church you attend, if you do not want to give or receive scandal?

Down
1. Running ___ : AMOK
The phrase “to run amok” (sometimes “to run amuck”) has been around since the 1670s and is derived from the Malay word for “attacking furiously”, “amuk”. The word “amok” was also used as a noun to describe Malay natives who were “frenzied”. Given Malaya’s troubled history, the natives probably had good reason for that frenzy …

3. Any of the singers of the 1973 hit “Love Train” : O’JAY
The O’Jays are an R&B group from Canton, Ohio. They came together in 1963 as a band of five singers and are still performing today, although now only as a trio. The band took the name of the O’Jays as a tribute to a radio disk jockey called Eddie O’Jay who was big in Cleveland at the time. The biggest hit for the O’Jays is “Love Train”, from 1973.

4. Apocalyptic figures : 4 HORSEMEN
The Four Horsemen of the Apocalypse are introduced in the Book of Revelation in the Christian Bible. Each of the four represents woe for man, in the form of pestilence, war, famine and death. The four horsemen ride on a white, red, black and pale horse respectively.

6. A Kennedy : ETHEL
Ethel Kennedy is the widow of Robert F. Kennedy. Ethel was a roommate with Jean Kennedy, and through Jean met her brother Robert. Robert and Ethel had ten children together, with an eleventh child sadly arriving after Robert’s assassination in 1968.

11. Sed quencher : AGUA
In Spanish, thrist (sed) can be quenched by water (agua).

13. Lead-in to care : MEDI-
Medicare is divided into four parts:

19. A dystopian novel : 19 EIGHTY-FOUR
George Orwell’s famous novel actually has the title “Nineteen Eighty-Four” (as opposed to “1984”), with the date spelled out.

21. 1980s-’90s police drama : 21 JUMP STREET
“21 Jump Street” is a crime drama series that aired in the late eighties and early nineties. Star of the show was Johnny Depp. Depp’s career took off while he was still under contract to the show’s producer’s, so he worked at a relatively low rate of pay until he was able to exit at the end of the fourth season.

24. TV/radio host Dobbs : LOU
The journalist Lou Dobbs came to prominence as the anchor of the popular CNN business show “Lou Dobbs Tonight” which ran from 1980 to 2009. Apparently Dobbs was considering a run for the office of US President and may still be considering a run for one of the US Senate seats for New Jersey.

25. Bay filler : OATS
Bay is a common coloring for many species of horse. A bay has a dark brown coat over most of its body, with a black tail, mane, lower legs and ears.

26. Cloud producer, informally : H-TEST
There are two classes of nuclear weapons, both of which get the energy for the explosion from nuclear reactions. The first nuclear bombs developed, called atomic bombs (A-bombs), use fission reactions. Uranium nuclei are split into smaller nuclei with the release of an awful lot of energy in the process. The second class of nuclear weapons are fusion bombs. These devices are called thermonuclear weapons or hydrogen bombs (H-bombs). In a fusion reaction, the nuclei of hydrogen isotopes are fused together to form bigger nuclei, with the release of even greater amounts of energy than a fission reaction.

28. Mongolian dwellings : YURTS
A yurt is a wood-framed dwelling that is used by nomads in the steppes of Central Asia. Although a yurt is a substantial structure, it is of course extremely portable.

31. Author of “The Dead” : JOYCE
I am just not adventurous enough, so James Joyce just isn’t my cup of tea. Having said that, he did actually mention one of my own ancestors in one of his books, namely my g-g-grandfather’s brother …

“The Dead” is a short story, the final tale in the famous collection written by James Joyce known as “Dubliners”.

32. Burn soothers : ALOES
Aloe vera has a number of alternate names that are descriptive of its efficacy as a medicine. These include the First Aid plant, Wand of Heaven, Silent Healer and Miracle Plant.

38. Some tax shelters, for short : IRAS
I have to tell you, when I first came to the US from Ireland it was pretty confusing seeing big signs along the freeway advocating IRA contributions. Back in Ireland, contributing to the IRA was pretty illegal (where IRA stands for the outlawed Irish Republican Army!).

39. Like Jack Benny, as he always said : 39 YEARS OLD
Jack Benny was an incredibly successful and talented comedian. As part of his act he often portrayed himself as a penny-pinching miser, a terrible violinist, and insisted he was 39 years old for the whole of his career.

52. Many a Comicon attendee : GEEK
Comicon is the name given to several comic book conventions held all over the world.

54. Edison’s middle name : ALVA
Thomas Alva Edison was nicknamed “The Wizard of Menlo Park” by a newspaper reporter, a name that stuck. He was indeed a wizard, in the sense that he was such a prolific inventor. The Menlo Park part of the moniker recognizes the location of his first research lab, in Menlo Park, New Jersey.

59. Imp’s ammo : PEA
An imp might shoot peas from a pea shooter.