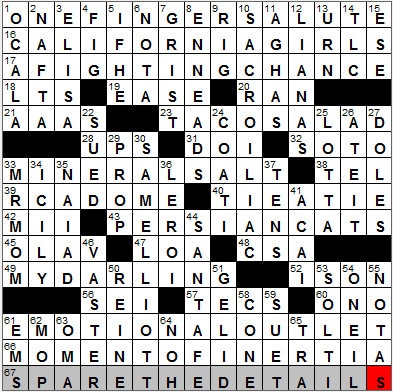 18. Fuzz and Flap, in the comics: Abbr. : LTS
Lieutenant Sonny Fuzz and Lieutenant Jackson Flap are characters in the “Beetle Bailey” comic strip.

32. “Licence to Kill” Bond girl Talisa : SOTO
Talisa Soto is a model and actress from Brooklyn, New York. As a model, Soto was featured in the 1995 “Sports Illustrated Swimsuit Issue”. As an actress, she was a Bond girl, appearing opposite Timothy Dalton in 1989’s “Licence to Kill”.

A few years ago I had the privilege of living just a short car ride from the beautiful city of Arles in the South of France. Although it has a long and colorful history, the Romans had a prevailing influence over the city’s design. Arles has a spectacular Roman amphitheater, arch, circus as well as old walls that surround the center of the city. In more modern times, it was a place Vincent van Gogh often visited, and where he painted his famous “Cafe Terrace at Night”, as well as “Bedroom in Arles”.

39. Lucas Oil Stadium replaced it : RCA DOME
The RCA Dome was probably better known as the Hoosier dome, home to the Indianapolis Colts from 1984-2007. It was torn down in 2008, but the inflated roof was put to good use afterwards. The material was re-purposed by local artisans, creating wallets, messenger bags etc. These can still be purchased, with proceeds going to charity.

43. Some longhairs : PERSIAN CATS
The Persian is that long-haired cat with the squashed muzzle. The breed takes its name from its place of origin, namely Persia (Iran).

45. Johann ___ Koss, speed skater with four Olympic golds : OLAV
Johann Olav Koss is a former speed skater from Norway, widely considered as one of the best speed skaters in history.

57. Hammer or Spade types : TECS
“Tec” is slang for a private detective.

Mike Hammer is the protagonist in a series of private detective novels by Mickey Spillane. The novels have been adapted for radio, television and the big screen. The actor most associated with Mike Hammer is Stacy Keach, who played the role in the TV series “Mickey Spillane’s Mike Hammer” from 1984 to 1987.

Private detective Sam Spade is the main character in Dashiell Hammett’s novel “The Maltese Falcon”. Famously, Spade was played by Humphrey Bogart in the 1941 film adaptation directed by John Huston.

60. “Spec of Dust” singer, 1982 : ONO
Yoko Ono was born into a prosperous Japanese family, and is actually a descendant of one of the emperors of Japan. Her father moved around the world for work and she lived the first few years of her life in San Francisco. The family returned to Japan before moving on to New York, Hanoi and back to Japan just before WWII, in time to live through the great fire-bombing of Tokyo in 1945. Immediately after the war the Ono family was far from prosperous. While Yoko’s father was being held in a prison camp in Vietnam, her mother had to resort to begging and bartering to feed her children. When her father was repatriated, life started to return to normal and Yoko was able to attend university. She was the first woman to be accepted into the philosophy program of Gakushuin University.

66. Classical mechanics concept introduced by Euler : MOMENT OF INERTIA
The moment of inertia is a measure of an object’s resistance to changing its rotation.

Down
1. Southern city called the Horse Capital of the World : OCALA
The city of Ocala was founded near a historic village with the same name. In the local Timucua language “Ocala” means “Big Hammock”. Thoroughbred horse farming in Florida started in Ocala, back in 1943. Some folks today call Ocala the “Horse Capital of the World”, but I bet that’s disputed by others …

2. Deal opposed by Perot : NAFTA
The North American Free Trade Agreement (NAFTA) is between Canada, Mexico and the United States. When it came into force in 1994 it set up the largest free trade zone in the world (in terms of Gross Domestic Product).

3. Donovan of “Clueless” : ELISA
Elisa Donovan is an actress from Poughkeepsie, New York. Donovan’s big break came in the film “Clueless” playing a part that she later played in the television series of the same name.

7. Ammunition : GRIST
In the idiom “grist for the mill”, the grist is something that can be used to advantage.

8. Baseball lineups, e.g. : ENNEADS
Ennead is the Greek word for “the nine”.

9. What a roughneck works on : RIG
A roughneck is a crew member on an oil rig.

11. Ottoman commanders : AGHAS
“Aga”, or “agha”, is a title that was used by both civil and military officials in the Ottoman Empire.

12. Jungle growth : LIANAS
Liana is the name give to vines that generally grow in moist areas such as rain forests. They grow using the trees in the forest as support. My bet is that Tarzan swung from tree to tree on liana vines …

13. Barista’s container : URN
The person who serves coffee in a coffee shop is often called a “barista”. “Barista” is the Italian for “bartender”.

14. “CrazySexyCool” R&B trio : TLC
TLC is an American hip-hop girl-group. The trio’s name comes from the stage names of the band members: T-Boz, Left Eye and Chilli. I’d never heard of them but they are apparently the biggest-selling female group of all time. I find that hard to believe! The Supremes? The Andrews Sisters? Maybe I need to stop living in the past …

15. Computer peripheral? : -ESE
I think the reference is to the term “computerese”, but I could be wrong …

[A kind blog reader points out that the reference is indeed to “computerese”, techie language, and there is also a pun on the term “computer peripheral”]

24. Cousin of a kinkajou : COATI
A coati is a member of the raccoon family and is also known as the Brazilian aardvark, or the snookum bear. The coati is native to Central and South America, but can also be found in the southwest of the United States.

30. He played Virgil Earp in “Tombstone,” 1993 : SAM ELLIOTT
Sam Elliott is an actor from Sacramento, California. I love watching his performances as he has such a distinctive appearance with a rich moustache, and an amazing deep voice. Elliott is married to one of my favorite actresses: Katherine Ross.

33. Michael Keaton title role : MR MOM
“Mr. Mom” is a 1983 comedy written by John Hughes, starring Michael Keaton and the great Teri Garr. It’s all about an engineer in the auto industry in Detroit who loses his job and then takes over the running of the household while his wife heads back to work. It’s funny stuff …

35. Aquatic dragonfly larva : NAIAD
A nymph, also known as a naiad, is the immature form of some insects. A nymph is a particular form of larva, one that resembles the adult.

36. “The Toilet” playwright Jones : LEROI
The highly controversial poet and playwright LeRoi Jones changed his name to Amiri Baraka in 1967. A native of Newark, New Jersey, Baraka was named Poet Laureate of his home state in 2002, just ten months after the September 11 attacks. When the New Jersey Governor found out that Baraka had written a poem and made statements that he believed President George W. Bush and Israel were involved in the terrorist attacks, the Governor tried to remove him from the post of Poet Laureate, eventually having to resort to abolishing the post altogether.

41. Antioxidant berry : ACAI
Açaí is a palm tree native to Central and South America. The fruit has become very popular in recent years and its juice is a very fashionable addition to juice mixes and smoothies.

44. Terminus of a 19th-century “Trail” : SANTA FE
The Santa Fe Trail connected Franklin, Missouri in the east to Santa Fe, New Mexico in the west. It was an oft-travelled route for much of the 1800s before the advent of the railroad in 1880.

53. Eight-time Best Opera Recording Grammy winner : SOLTI
Sir Georg Solti was a great Hungarian-British conductor, who spent 22 years as music director of the Chicago Symphony, one of many prestigious positions he held in the world of classical music and opera. Solti was awarded 31 Grammy Awards, the most won by any individual in any genre of music.

54. Buck in Cooperstown : O’NEIL
Buck O’Neil was a first baseman and manager with the Kansas City Monarchs, a team in the Negro American League.

59. Material for some soapmakers : SUET
Fat, when extracted from the carcass of an animal, is called “suet”. Untreated suet decomposes at room temperature quite easily so it has to be “rendered” or purified to make it stable. Rendered fat from pigs is what we call “lard”. Rendered beef or mutton fat is known as “tallow”.

Soap is basically made by adding a strong alkali (like lye) to a fat (like olive oil). The fats break down in the basic solution in a process called saponification. The crude soap is extracted from the mixture, washed, purified and finished in molds.

The first use of an emergency phone number nationally was in the UK in 1937, where the number 999 was introduced to call emergency services. If you need emergency services in the UK or Ireland to this day, you have to dial 999. It’s not really clear why 911 became the emergency number in the US. The most credible suggestion (to me) is that when it was introduced by the FCC in 1967, it was a number that “fit” with the numbers already used by AT&T for free services (211-long distance; 411-information; 611-repair service).

64. Plays accompanied by hayashi : NOH
Noh is a form of musical drama in Japan that has been around since the 14th century. Many of the performers are masked, allowing all the roles to be played by men, both male and female parts.

A hayashi is a group of musical performers who provide accompaniment for Japanese Noh and kabuki theater.