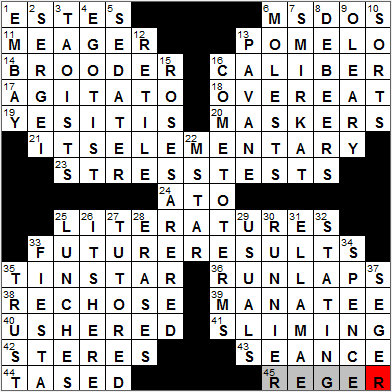 
Today’s Wiki-est, Amazonian Googlies
1. Children’s author Eleanor : ESTES
Eleanor Estes started writing children’s books when she was bedridden, recovering from tuberculosis. By the time she died in 1988, she had written 20 books, including one novel for adults. Her most lauded title is “Ginger Pye” published in 1951.

6. Environment of many old PCs : MS-DOS
MS-DOS was the main operating system used by IBM-compatible PCs in the eighties and for much of the nineties.

13. Grapefruit taste-alike : POMELO
The pomelo is a citrus fruit native to Southeast Asia. Apparently it tastes like a sweet, mild grapefruit. I don’t think I have ever had one …

16. Round number? : CALIBER
In a gun, its caliber is the diameter of its barrel (approximately). Bullets are just a little smaller than the diameter of the barrel, so bullets are also classified by caliber. So, a “forty-five”, has a diameter of 0.45 inches.

17. Restless, in scores : AGITATO
Agitato is a musical term seen on scores occasionally, and it means “agitated”.

21. “This doesn’t exactly require a Ph.D.” : IT’S ELEMENTARY
PhD is an abbreviation for “philosphiae doctor”, Latin for “teacher of philosophy”.

35. Wild West symbol of authority : TIN STAR
In the Old West a “tin star” was a sheriff’s badge.

39. SeaWorld attraction : MANATEE
Manatees, also known as sea cows, are very large marine mammals that can grow to 12 feet in length. The manatee is believed to have evolved from four-legged land mammals and probably shares a common ancestor with the elephant. The manatee’s upper lip somewhat resembles the trunk of an elephant in that it is prehensile, and can be used to grip it’s food.

SeaWorld was started in San Diego in 1964. The original plan was build an underwater restaurant with a marine life show. Eventually the founders dropped the idea of the eating establishment and just went with a theme park.

41. Activity in “Ghostbusters” : SLIMING
1984’s “Ghostbusters” really is a fun movie. It stars Bill Murray and Harold Ramis, and was directed by Ivan Reitman (a trio that also worked together on 1981’s “Stripes”). The first draft of the screenplay was written by another star of the movie, Dan Akroyd. Akroyd originally envisioned “Ghostbusters” as a vehicle for himself and John Belushi, but sadly Belushi passed away before the project could be realized.

42. Firewood measures : STERES
“Stere” is a metric measure, although it is not part of the modern metric system. Nowadays the stere is used as a measure for firewood, and is equal to one cubic meter.

43. Attempt to recall the passed? : SEANCE
“Séance” is a French word meaning “a sitting”.

44. Stunned, in a way : TASED
Victor Appleton wrote a novel for young adults called “Tom Swift and His Electric Rifle”. The company that developed the TASER electroshock weapon named their product as a homage to the novel, as TASER stands for “Thomas A. Swift’s Electric Rifle”. Interesting, eh?

45. German composer with a palindromic name : REGER
Max Reger was a German composer and conductor. One of his students was George Szell, the famous Hungarian-born American composer who worked with the Cleveland Orchestra for so many years.

Down
2. Eisenstein who directed “The Battleship Potemkin” : SERGEI
Sergei Eistenstein was a Soviet film director from Riga, then part of the Soviet Union. Known as the Father of Montage, his most famous work is “Battleship Potemkin” released in 1925.

The Russian battleship Potemkin is perhaps more famous for an on-board rebellion than for any naval action. In 1905, the Potemkin was on firing exercises when the crew refused to eat meat that contained maggots. The second-in-command gathered the crew on the quarterdeck, and lined them up in front of armed marines. Fearing a mass execution, the crew rushed the marines and began the famous mutiny. The event was reconstructed in an equally famous film by Sergei Eisenstein called “The Battleship Potemkin”, a silent film released in 1925 that is considered by many to be the greatest film of all time.

3. Some Asian believers : TAOISTS
The Chinese character “tao” translates as “path”, but the concept of Tao signifies the true nature of the world.

8. Big name in diamonds : DE BEERS
The hugely successful De Beers company is involved in all aspects of mining and trading of diamonds. The company was founded in 1888 in South Africa by Cecil Rhodes (after whom “Rhodesia” would be named). The name of the company comes from two brothers who owned a farm on which was discovered a particularly lucrative diamond mine. The De Beers brothers had absolutely nothing to do with the company nor its operations.

9. Last name in Chicago lore : O’LEARY
The Great Chicago Fire blazed for almost three full days in October of 1871. By the time it was extinguished, hundreds of people had died and four square miles of the city had been destroyed. It is known that the fire started in or near a small barn owned by an Irish immigrant, a Mrs. Catherine O’Leary. A reporter called Michael Ahern wrote in the “Chicago Tribune” that the fire was ignited when a cow in the barn kicked over a lantern. Years later, Ahern admitted that he made up the story about the cow and the lantern, as he felt it made colorful copy. Supposedly Mrs. O’Leary died a heart-broken woman as she spent the rest of her life with the public blaming her on the tragic loss of life and property.

13. Quaint, dignified dance for couples : PAVANE
A pavane is a slow dance, one in which the dancers process majestically. Pavanes were very popular in Renaissance Europe.

15. Valentine verse starter : ROSES ARE RED
As kids we used to say:

Roses are red
Violets are blue
God made me beautiful
What happened to you?

22. Many a red dwarf : M STAR
Stars are usually classified based on the color of the light that they emit. These classifications are, from hottest to coolest, O, B, A, F, G, K and M. One way to remember the order of these letters is to use the mnemonic “Oh, be a fine girl, kiss me”. The colors of these stars range from blue (class O) to red (class M). Our sun is class G, a yellow star, but I think we all know that …

A red dwarf is a relatively small star, and one that is relatively cool. In terms of size, a red dwarf has less than half the mass of our sun. Being a “cool” star, a red dwarf is classified as a K or M spectral type of star. Red dwarfs are the most common type of star in our Galaxy, with our nearest star (other then the sun) being a good example, Proxima Centauri.

31. Singer Morse with the 1952 hit “The Blacksmith Blues” : ELLA MAE
Ella Mae Morse was a singer from Texas, first hired by bandleader Jimmy Dorsey when she was just 14 years old (she told him she was 19!).

33. Piñata-hitting occasion : FIESTA
Today piñatas are usually made from cardboard that is brightly decorated with papier-mâché. Piñatas originated in Mexico, probably among the Aztecs or Mayans. Traditionally a piñata was made out of a clay pot, adorned with feathers and ribbons and filled with small treasures. During religious ceremonies the clay pots would be suspended and broken open so that the contents would spill out onto the ground at the feet of a god as an offering.

34. Superlawyer Gerry who wrote “How to Argue and Win Every Time” : SPENCE
Gerry Spence is a semi-retired lawyer from Laramie, Wyoming. He was associated with many high-profile cases in his career, and was rarely defeated. Spence first came into the public eye when he represented the family of Karen Silkwood, a famous whistle-blower at a plutonium production plant (and inspiration for the 1983 movie “Silkwood”). Spence was also the attorney who defended Lee Harvey Oswald in a famous mock trial that was sponsored by a UK television company. Spence lost that mock trial, but it sure did make for great television …

37. “Old Time Rock & Roll” rocker : SEGER
Bob Seger struggled as an artist right through the sixties and early seventies before becoming a commercial success in 1976 with the release of the album “Night Moves”. Since then, he has recorded songs that have become classics like, “We’ve Got Tonight” and “Old Time Rock & Roll”.

For the sake of completion, here is a full listing of all the answers:
Across
1. Children’s author Eleanor : ESTES
6. Environment of many old PCs : MS-DOS
11. Opposite of ample : MEAGER
13. Grapefruit taste-alike : POMELO
14. Heated house for newborn chicks : BROODER
16. Round number? : CALIBER
17. Restless, in scores : AGITATO
18. Go beyond seconds, say : OVEREAT
19. Confirmation declaration : YES, IT IS
20. Some people in costume : MASKERS
21. “This doesn’t exactly require a Ph.D.” : IT’S ELEMENTARY
23. What big banks underwent in 2009 : STRESS TESTS
24. ___ B (initial step) : A TO
25. They may be studied along with languages : LITERATURES
33. What past performance may portend : FUTURE RESULTS
35. Wild West symbol of authority : TIN STAR
36. Practice at a track : RUN LAPS
38. Went for something else : RECHOSE
39. SeaWorld attraction : MANATEE
40. Put people in their places? : USHERED
41. Activity in “Ghostbusters” : SLIMING
42. Firewood measures : STERES
43. Attempt to recall the passed? : SEANCE
44. Stunned, in a way : TASED
45. German composer with a palindromic name : REGER