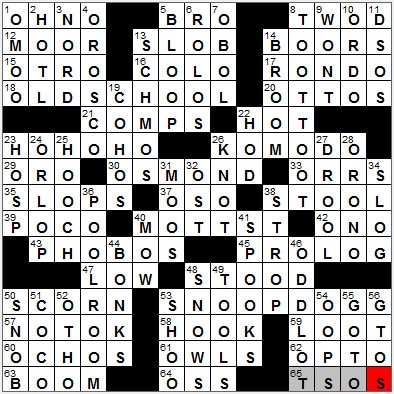 CROSSWORD SETTER: Steven Riley
THEME: All the Os … the grid is replete with the letter O, 69 of them in fact. And there’s not one other vowel.
COMPLETION TIME: 10m 56s
ANSWERS I MISSED: 0


Today’s Wiki-est, Amazonian Googlies
5. “Don’t tase me, ___!” : BRO
The phrase “Don’t tase me, bro!” entered the public consciousness after a clash between a student and University of Florida police officers back in 2007. The student, Andrew Meyer, was being escorted away from a public forum after demanding the right to ask questions after the question period had ended. He resisted the officers and was arrested. After further resistance an officer pulled out his taser and Meyer uttered the words “Don’t tase me, bro!”. As one might expect these days, the whole incident was filmed by onlookers and posted on YouTube. The videos went viral, and “Don’t tase me, bro!” eventually was listed by “The Yale Book of Quotations” as the most memorable quote of the year.

12. Othello, e.g. : MOOR
The most famous Moor in literature has to be Othello, the title character in William Shakespeare’s tragedy “Othello, the Moor of Venice”. The word “Moor” describes various peoples of North Africa, usually of the Muslim faith. At the height of their geographic influence the Moors occupied much of the Iberian peninsula, calling it Al Andalus (from which modern Andalusia gets its name).

20. Four Holy Roman emperors : OTTOS
The Holy Roman Empire (HRE) existed from 962 to 1806 AD and was a territory of varying size over the centuries that centered on the Kingdom of Germany. The HRE was a successor to the western half of Roman Empire of the ancient Roman civilization.

26. ___ dragon : KOMODO
A Komodo dragon is so named because it is found on the island of Komodo (and others) in Indonesia. It can grow to a length of over 9 1/2 feet, so I guess that explains the dragon part of the name …

29. Treasure in un castillo : ORO
In Spanish, gold “oro” might be found in a castle (castillo).

30. Singer Donny or Marie : OSMOND
The former teen idol Donny Osmond was of course a member of the Osmond Brothers singing group that appeared for years on the “The Andy Williams Show”. At the height of his solo career, Donny teamed up with his younger sister Marie Osmond in their own variety show called “Donnie & Marie”. The pair have been working together ever since and have been appearing at the MGM Grand in Las Vegas since 2008.

39. Somewhat, in music : POCO
“Poco” is an Italian word for “little” and is used in musical notation to mean “to a small degree, a little”.

40. Main thoroughfare through N.Y.C.’s Chinatown : MOTT ST
Mott Street in Manhattan was probably named after a successful butcher and tavern owner who lived in the area. Mott was known for lending support to those fighting the British during the American Revolution.

42. 1969 “bed-in” participant : ONO
John Lennon and Yoko Ono had a very public honeymoon in a hotels in Amsterdam and then Montreal, when they staged their famous “bed-in” for peace. In answering questions from reporters Lennon found himself often repeating the words “give peace a chance”. While still in bed, he composed his famous song “Give Peace a Chance” and even made the original recording of the song in the Montreal hotel room, with reporters present, and with a whole bunch of friends. The song was released later in 1969 and became a smash hit.

43. Orbiter of Mars : PHOBOS
Mars has two moons, the larger of which is Phobos and the smaller is Deimos. “Phobos” is the Greek word for “fear”, and “Deimos” is Greek for “dread”.

53. “Still a G Thang” rapper : SNOOP DOGG
The rap star Snoop Dogg’s real name is Cordozar Calvin Broadus. He is the most famous protege of the notorious rapper Dr. Dre. Sadly, Snoop Dogg has had numerous run-ins with police all round the world, even after he started to live the good life that came with his fame.

59. Booty : LOOT
“Booty”, meaning plunder or profit, is derived from the Old French word “butin” which has the same meaning.

64. C.I.A. forerunner : OSS
The Office of Strategic Services (OSS) was formed during WWII in order to carry out espionage behind enemy lines. A few years after the end of the war the OSS functions were taken up by a new group, the Central Intelligence Agency that was chartered by the National Security Act of 1947.

65. General ___ chicken : TSO’S
General Tso’s chicken is an American creation, often found on the menu of a Chinese restaurant. The name General Tso may be a reference to General Zuo Zontang of the Qing Dynasty, but there is no clear link.

Down
1. Sequel to “Typee” : OMOO
Herman Melville mined his own experiences for his most famous novel, “Moby Dick”. Melville sailed from New Bedford, Massachusetts in 1841 on a whaler heading into the Pacific Ocean (a source for “Moby Dick”). Melville ended up deserting his ship 18 months later, and lived with natives (actually cannibals) on a South Pacific Island for three weeks (a source for “Typee”). He picked up another whaler and headed for Hawaii, where he joined the crew of a US navy frigate headed for Boston (a source for “Omoo”).

2. Wilson’s “The ___ Baltimore” : HOT L
“The Hot l Baltimore” is a play by Lanford Wilson about the manager and residents of a dilapidated hotel in Baltimore. The play’s name comes from the establishment’s neon sign which is meant to read “Hotel Baltimore”, but the burnt out “e” was never replaced.

3. Away from l’Antarctique : NORD
In French, when moving away from the Antarctic (l’Antarctique), one moves to the north (nord).

4. Jesse who pitched a major-league record 1,252 games : OROSCO
Jesse Orosco is a former baseball pitcher who played for several teams including the New York Mets and the Los Angeles Dodgers. Orosco had a long playing career, retiring when he was 46 years old. Partly because of that long career, he holds the major league record for career pitching performances: 1,252 games.

6. Chocolatey Hershey candy : ROLOS
Rolo was a hugely popular chocolate candy in Ireland when I was growing up. It was developed in the thirties in the UK, and is made under license in the US by Hershey. I was a little disappointed when I had my first taste of the American version as the center is very hard and chewy, whereas the recipe used on the other side of the Atlantic calls for a soft, gooey center.

7. Ancient Greek coin : OBOL
An obol is also known as an obolus. It was a silver coin used in Greece, and worth one sixth of a drachma.

10. Great Seal word : ORDO
The Latin phrase “Novus ordo seclorum” means “New order of the ages”. It appears on the reverse of the Great Seal of the United States, a device used to authenticate some US federal documents. “Novus ordo seclorum” also appears on the back of one-dollar bills. The phrase itself is lifted from one of the works of the ancient Roman poet Virgil.

11. U.K. decorations : DSOS
The Distinguished Service Order (DSO) is a British military award, usually presented to officers with the rank of Major or higher.

13. Stupid sorts : SCHMOS
“Schmo” is American slang for a dull or boring person, from the Yiddish word “shmok”.

14. Stick between the legs? : BROOM
A witch (or maybe Harry Potter) might fly threw the air on a broom.

19. Some salmon : COHOS
The Coho salmon is silver along the side of its body, but only during the phase of its life while it is in the ocean. When spawning, and heading up into a freshwater river, the Coho has bright red sides.

22. Brick carrier : HOD
A hod is 3-sided box on the the end of a long handle used for carrying bricks (and sometimes mortar) at a construction site, usually up and down ladders.

24. Lowest deck of a ship : ORLOP
The orlop is the lowest deck on the ship, the place where cables and ropes used to be stored. The name “orlop” comes from the Dutch word “overlopen” meaning “to run over”. The idea is that all these ropes “ran over” each other while in storage.

25. Moonshine : HOOCH
In the Klondike gold rush, a favorite tipple of the miners was “Hoochinoo”, a liquor made by the native Alaskans. Soon after “hooch” (also “hootch”) was adopted as a word for cheap whiskey.

31. Things Old MacDonald hears : MOOS
There was an American version of the English children’s song “Old MacDonald Had a Farm” (E-I-E-I-O), that was around in the days of WWI. The first line of the US version goes “Old Macdougal had a farm, in Ohio-i-o”.

36. Place for a break : POOL ROOM
The more correct name for the game of pool is pocket billiards. The name “pool” came after pocket billiards became a common feature in “pool halls”, places where gamblers “pooled” their money to bet on horse races.

38. It makes a cutting edge : STROP
A strop is a strip of leather used to sharpen a razor.

49. Ax and adz : TOOLS
An adze (also adz) is similar to an axe, but different in that the blade of an adze is set at right angles to the tool’s shaft. An axe’s blade is set in line with the shaft.

50. One not socializing much with hoi polloi : SNOB
Back in the 1780s, a “snob” was a shoemaker or a shoemaker’s apprentice. By the end of the 18th century the word was being used by students at Cambridge University in England to refer to all local merchants and people of the town. The term evolved to mean one who copies those who are his or her social superior (and not in a good way). From there it wasn’t a big leap for “snob” to include anyone who emphasised their superior social standing and not just those who aspired to rank. Nowadays a snob is anyone who looks down on those considered to be of inferior standing.

“Hoi polloi” is a Greek term, literally meaning “the majority, the many”. In English it has come to mean “the masses” and is often used in a derogatory sense.

52. Roman emperor of A.D. 69 : OTHO
Otho was Emperor of Rome for only three months, before he committed suicide.