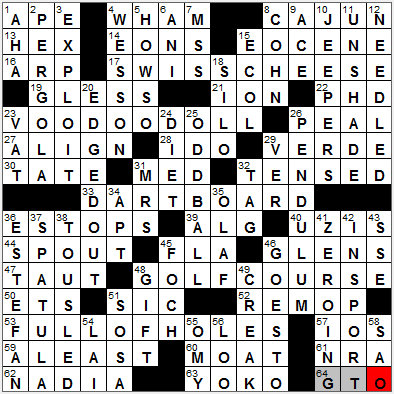 
Today’s Wiki-est, Amazonian Googlies
1. “Kinsman” of Tarzan : APE
“Tarzan” is the title character in the series of books created by Edgar Rice Burroughs. The line “Me Tarzan, you Jane” never appeared in the books, and indeed doesn’t even figure in the movies. Apparently Johnny Weissmuller (the original movie “Tarzan”) saw Maureen O’Sullivan (the original movie “Jane”) struggling with a suitcase in the parking lot during filming. He grabbed the bag from her, jokingly saying “Me Tarzan, you Jane”, and people have been quoting those words ever since.

8. Spicy cuisine : CAJUN
Cajun cuisine is named for the French-speaking Acadian people who were deported from Acadia in Canada to Louisiana.

The great explorer Verrazzano gave the name “Arcadia” to the coastal land that stretched from north of present day Virginia right up the North American continent to Nova Scotia. The name Arcadia was chosen as it was also the name for a part of Greece that had been viewed as “idyllic” from the days of classical antiquity. The “Arcadia” name quickly evolved into the word “Acadia” that was used locally here in North America. Much of Acadia was settled by the French in the 1600s, and then in 1710 Acadia was conquered by the British. There followed the French and Indian War after which there was a mass migration of French Acadians, often via the French colony of Saint-Dominique (present-day Haiti) to the French colony of Louisiana. The local dialectic pronunciation of the word “Acadian” was “Cajun”, giving the name to the ethnic group for which Louisiana has been home for about 300 years.

13. A witch might put one on you : HEX
“Hexen” is a German word meaning “to practice witchcraft”. The use of the word “hex” in English started with the Pennsylvania Dutch in the early 1800s.

15. Epoch when mammals arose : EOCENE
The Eocene Epoch lasted from 56 to 34 million years ago, and is noted for the emergence of the first mammals on the planet.

16. Klee contemporary : ARP
Hans Arp was a French artist renowned for his work with torn and pasted paper, although that wasn’t the only medium he used. He was the son of a French mother and German father and spoke both languages fluently. When he was speaking German, he gave his name as Hans Arp, but when speaking French he called himself Jean Arp. Both “Hans” and “Jean” translate into English as “John”.

17. Monte Cristo ingredient : SWISS CHEESE
Swiss cheese is a relatively generic term, a type of cheese produced in various countries and not necessarily in Switzerland. What they all have in common though, is a resemblance to the original Swiss Emmental cheese.

The Monte Cristo sandwich is a ham and cheese sandwich that has been fried. The cheese used is Swiss, more properly Emmental or Gruyère. The Monte Cristo is a variant of the French open-faced sandwich made with the same ingredients, the croque-monsieur.

21. Old Saturn model : ION
The Saturn Ion was produced by GM from 2003 to 2007. It was the longest (in length) of any car sold in North America that was labelled as a “compact”.

22. Scholar’s deg. : PHD
PhD is an abbreviation for “philosphiae doctor”, Latin for “teacher of philosophy”.

23. Spelling aid? : VOODOO DOLL
Voodoo is a religion that originated the French slave colony of Saint-Domingue on the Caribbean island of Hispaniola.

31. Club ___ : MED
Club Méditerranée is usually known as Club Med. It is a French company that started in 1950 with a resort on the Spanish island of Mallorca in the Mediterranean. It was originally a “club” with annual membership dues. Now it is an operator of numerous all-inclusive resorts located all over the world.

33. Pub hub : DARTBOARD
Darts is a wonderful game often played in English and Irish pubs, even over here in America. The scoring in a traditional game of darts is difficult to describe in a sentence or two, but the game of darts called “Round the Clock” is simply hitting the numbers 1 through 20 in sequence.

36. Legally impedes : ESTOPS
The legal term “estop” means to block or stop by using some legal device. The word “estop” comes from Old French, in which “estopper” means “to stop up” or “to impede”.

40. Commando weapons : UZIS
The first Uzi sub-machine gun was designed in the late 1940s by Major Uziel Gal, who gave his name to the gun.

50. Those aboard a U.F.O. : ETS
In 1952, the USAF revived its studies of reports of UFO sightings in a program called Project Blue Book. There were two prior USAF studies of the UFO phenomenon, namely Project Sign and Project Grudge. Project Blue Book ran from 1952 until it was shut down in 1969 with the conclusion that there was no threat to national security, and that there were no sightings that could not be explained within the bounds of modern scientific knowledge.

51. “___ semper tyrannis” : SIC
“Sic semper tyrannis” is a Latin phrase that was supposedly spoken by Brutus during the assassination of Julius Caesar. The expression translates as “down with the tyrant”. These were also the words shouted out by John Wilkes Booth as he assassinated President Abraham Lincoln.

57. Aegean island on which Homer is said to be buried : IOS
The Cyclades are a group of islands in the Aegean lying southeast of the Greek mainland. There are about 200 islands in the group, almost all of which are the peaks of a submerged mountain range. Ios is one of the larger islands, 11 miles long and 6 miles wide.

61. Big D.C. lobby : NRA
The NRA is the National Rifle Association, an organization that has been around since 1871. The group has had some celebrity presidents, including US President Ulysses S. Grant. It’s often said that the NRA is the most powerful lobbying group in Washington.

62. Gymnast Comaneci : NADIA
Nadia Comaneci won three golds in the 1976 Summer Olympics and was the first gymnast to be awarded a perfect score of a ten in the gymnastics competition. She published a book “Letters to a Young Gymnast” in 2003, and now lives in the United States.

63. John’s other half : YOKO
Yoko Ono was born into a prosperous Japanese family, and is actually a descendant of one of the emperors of Japan. Her father moved around the world for work and she lived the first few years of her life in San Francisco. The family returned to Japan before moving on to New York, Hanoi and back to Japan just before WWII, in time to live through the great fire-bombing of Tokyo in 1945. Immediately after the war the family was far from prosperous. While Yoko’s father was being held in a prison camp in Vietnam, her mother had to resort to begging and bartering to feed her children. When her father was repatriated, life started to return to normal and Yoko was able to attend university. She was the first woman to be accepted into the philosophy program of Gakushuin University.

John Lennon and Yoko Ono had a very public honeymoon in a hotels in Amsterdam and then Montreal, when they staged their famous “bed-in” for peace. In answering questions from reporters Lennon found himself often repeating the words “give peace a chance”. While still in bed, he composed his famous song “Give Peace a Chance” and even made the original recording of the song in the Montreal hotel room, with reporters present, and with a whole bunch of friends. The song was released later in 1969 and became a smash hit.

“… really drives ’em wi-i-ild,” are words appearing the song “G.T.O”, the debut recording for the surf rock group of the sixties known as Ronny & the Daytonas.

Down
2. Vine-covered passageway : PERGOLA
A pergola looks somewhat like a gazebo in structure, but it is an open walkway, with vines trained up the sides and over the top. “Pergola” ultimately derives from the Latin “pergula”, the word for a covered eave.

4. Oil name : WESSON
Wesson cooking oil was named for David Wesson, a food chemist who came up with a process to deodorize cottonseed oil in 1899. Wesson used to be pure cottonseed oil, but is now a mixture of cheaper vegetable oils.

7. Ed.’s stack : MSS
Editors can have a stack of manuscripts on their desks.

8. Harry who co-founded Columbia Pictures : COHN
Columbia Pictures was founded in 1919 as Cohn-Brandt-Cohn Film Sales, by brothers Jack and Harry Cohn, and Joe Brandt. The name was changed to Columbia Pictures in 1924 when the company went public. The Columbia name became associated with the wonderful Hollywood screwball comedies of the thirties, thanks to the association with director Frank Capra, and stars like Jean Arthur and Cary Grant.

9. Server’s wish : ACE
Someone serving in a tennis match would like to serve an ace.

18. Storage site : SILO
Silo is a Spanish word that we absorbed into English, originally coming from the Greek word “siros” that described a pit in which one kept corn.

32. It may put someone out : TAG
One might be tagged out on a baseball diamond.

35. Norwegian king : OLAF
Of the many kings of Norway named Olaf/Olav (and there have been five), Olaf II is perhaps the most celebrated as he was canonized and made patron saint of the country. Olaf II was king from 1015 to 1028, and was known as “Olaf the Big” (or Olaf the Fat) during his reign. Today he is more commonly referred to as “Olaf the Holy”.

36. Grammy-winning Gloria : ESTEFAN
Gloria Estefan is a Cuban American singer, born in Havana. She fled Cuba along with her family after the Cuban Revolution, and ended up in Miami. Her father fought for the US military in Vietnam, and also took part in the doomed Bay of Pigs invasion. Years later, Gloria herself was approached by the CIA to work for the agency due to her skill with languages. She ended up doing quite well singing instead …

45. Nina of 1940s-’50s films : FOCH
Nina Foch was a Dutch-American actress who appeared in many Hollywood movies in the forties and fifties. Foch’s first husband was James Lipton, the host of Bravo’s “Inside the Actors Studio”.

51. Slugger Sammy : SOSA
Sammy Sosa was right in the public eye in 1998 when he and Mark McGwire were vying to be the first to surpass the home run record held by Roger Maris. McGwire fell out of public favor due to stories of steroid abuse (stories which he later admitted were true) while Sosa fell of out favor when he was found to be using a corked bat in a 2003 game.

54. China’s Chou En-___ : LAI
Zhou Enlai (also Chou En-Lai) was the first government leader of the People’s Republic of China and held the office of Premier from 1949 until he died in 1976. He ran the government for Communist Party Leader Mao Zedong, often striking a more conciliatory tone with the West than that of his boss. He was instrumental, for example, in setting up President Nixon’s famous visit to China in 1972. Zhou Enlai died just a few months before Mao Zedong, with both deaths leading to unrest and a dramatic change in political direction for the country.

55. “Peg ___ Heart” : O’ MY
The song “Peg O’ My Heart” appeared in the 1913 musical “Ziegfield Follies”. The 1947 version referred to in the clue is by the Harmonicats, who had the most successful recording, one that made the number spot in the charts that year.

56. Stall in London : LOO
When I was growing up in Ireland, a “bathroom” was a room that had a bath and no toilet. The separate room with the commode was called “the toilet” or sometimes the W.C. (the water closet). Apparently the term closet was used because in the 1800s when homeowners started installing toilets indoors they often displaced clothes in a “closet”, as a closet was the right size to take the commode. It has been suggested that the British term “loo” comes from Waterloo (water-closet … water-loo), but no one seems to know for sure.

58. ___ Tomé : SAO
São Tomé is one of two islands off the west coast of Africa that make up the nation of São Tomé and Príncipe.