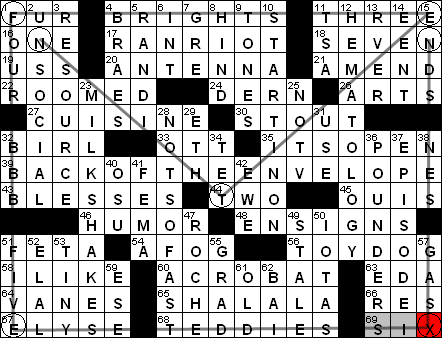 CROSSWORD SETTER: Daniel A. Finan
THEME: BACK OF THE ENVELOPE … each of the theme answers is is the number of cents that a particular stamp cost, with each stamp featuring the portrait of a US president. There is a note with the puzzle:

The circles in this puzzle are contained in words that form a sequence. Connect these circles, in the order of the sequence, to form an appropriate image.

So, we connect the circled letters in the numerical order defined by the number in which each circle appears i.e. ONE to SEVEN, and we get the outline of an ENVELOPE:


Today’s Wiki-est, Amazonian Googlies
11. Price in cents of a 1958 Monroe stamp : THREE
President James Monroe appears in a 1958 3-cent stamp as 1958 was the 200th anniversary of the president’s birth. The portrait of the president that was used in the design was painted by the artist Gilbert Stuart, who had also painted a portrait of President George Washington.

16. … of a 1968 Jefferson stamp : ONE
President Thomas Jefferson appears on a 1968 1-cent stamp. The portrait used for the stamp was painted by Rembrandt Peale, and the complete portrait can be seen in the Blue Room of the White House.

17. Went berserk : RAN RIOT
Our word “berserk” meaning “deranged” comes from the “Berserkers”, Norse warriors described in Old Norse literature. Berserkers were renowned for going into battle in a fury, and some believe that they consumed drugged food to get themselves worked up for the fighting ahead.

18. … of a 1938 Jackson stamp : SEVEN
President Andrew Jackson appears on a 1938 7-cent stamp. The president’s image in in profile, and comes from a bronze statue that was made by Belle Kinney and Leopold F. Scholz. That original statue stands in the Rotunda of the US Capitol Building.

19. ___ Arizona (Pearl Harbor memorial) : USS
The USS Arizona Memorial in Pearl Harbor sits across the sunken hull of the battleship, the resting place of 1,102 out of 1,117 sailors of the Arizona who were killed during the 1941 attack. After the attack, the superstructure of the Arizona protruded above the surface of the water. This was removed during and after WWII, leaving just a submerged hull. The memorial itself was approved by President Eisenhower in 1958, and the building was opened in 1962. In 1999, the battleship USS Missouri was permanently moored in Pearl Harbor, docked nearby and perpendicular to the Arizona. It was on the Missouri that the Japanese surrendered, marking the end of WWII.

24. Laura of “Jurassic Park” : DERN
The actress Laura Dern is the daughter of the actors Bruce Dern and Diana Ladd. Among her many notable roles, Dern played the Florida Secretary of State Katherine Harris in the 2008 movie “Recount”, and Dr. Ellie Sattler in the 1993 blockbuster “Jurassic Park”.

30. Guinness, e.g. : STOUT
Guinness is the most popular beer sold in Ireland. It has that famous creamy white head, a result of mixing the beer with nitrogen as it is poured. You can also buy Guinness that has no nitrogen, which is sold under the name Guinness Export. This carbonated version of the beer has a very different taste, and is my personal favorite.

32. Do some logrolling : BIRL
Birling is name given to the log rolling event at a lumberjack competition. “Birl” is a Scottish word meaning to spin or twirl.

44. … of a 1903 Washington stamp : TWO
Understandably, President George Washington appears more than any other president on US postage stamps. The image used for his appearance on a 1903 2-cent stamp comes from a painting by Gilbert Stuart.

48. Low-ranking officers : ENSIGNS
Ensign is the most junior rank of commissioned officer (usually) in the armed forces. The name comes from the tradition that the junior officer would be given the task of carrying the ensign flag.

51. Crumbly cheese : FETA
Feta is a Greek cheese made from sheep’s milk, or a mixture of sheep’s and goat’s milk. The cheese is salted and cured in a brine solution for several months before it is eaten.

63. Author LeShan : EDA
Eda LeShan wrote “When Your Child Drives You Crazy”, and was host of the PBS television show “How Do Your Children Grow?”

67. “Family Ties” mother : ELYSE
“Family Ties” was one of the first TV shows that I enjoyed when I arrived in the US back in 1983. I found the situation very appealing, with two ex-hippie parents facing off against an ultra-conservative son. The main characters in the show were Michael J. Fox as Alex, Meredith Baxter-Birney as Alex’s mom, Elyse, and Michael Gross as Alex’s Dad, Steven. But some future stars had recurring roles as well, including Courtney Cox as one of Alex’s girlfriends and Tom Hanks as Elyse’s young brother.

68. Sexy nightwear : TEDDIES
The item of lingerie known as a teddy can also be called “camiknickers”. The alternative name was used when the one-piece garment was introduced in the twenties, a combination of a camisole and panties (aka knickers).

69. … of a 1970 Eisenhower stamp : SIX
President Dwight D. Eisenhower’s image appears on the 6-cent denomination regular issue stamp for the years 1970 through 1974.

Down
1. … of a 1954 Lincoln stamp : FOUR
President Abraham Lincoln appears on the design of many US stamps, with only President Washington appearing more often. In fact, there are more designs featuring the image of President Lincoln than all the other presidents combined (excluding Washington). The postal service issued a Liberty Issue series of stamps between 1954 and 1965, with an image of President Lincoln on the 4-cent stamp, first issued in 1954.

4. Bonny hillsides : BRAES
“Brae” is a lowland Scots word for the slope or brow of a hill.

5. The Amazing ___ : RANDI
James Randi is a retired Canadian-American magician who had a stage career using the name “The Amazing Randi”. Now he spends his time investigating the paranormal, or in fact mainly challenging claims of paranormal activity. If you’re interested, the James Randi Educational Foundation is offering one million dollars to anyone who can demonstrate paranormal activity under controlled test conditions.

7. Aspiring Ph.D.’s test : GRE
Passing the Graduate Record Examination (GRE) is usually a requirement for entry into graduate school here in the US.

11. Org. doing pat-downs : TSA
The Transportation Security Administration (TSA) was of course created in 2001, soon after the 9/11 attacks.

15. Gridiron positions : ENDS
We never used the word “gridiron” when I was growing up (meaning a grill used for cooking food over an open fire). So, maybe I am excused for finding out fairly recently that a football field gridiron is so called because the layout of yard lines over the field looks like a gridiron used in cooking!

32. Consumer protection org. : BBB
The Better Business Bureau (BBB) is a private concern (nope, it is not a government agency), founded in 1912. It operates like a franchise, with local BBB’s managed independently but operating to a set of “corporate” guidelines.

36. Quarter ___ (McDonald’s orders) : POUNDERS
The Quarter Pounder sandwich was created just down the road here, in a McDonald’s restaurant in Fremont, California. The franchise owner felt that there was a market for a hamburger with more meat in the bun, and so introduced a meat patty that weighed a quarter pound prior to cooking. He advertised the Quarter Pounder in his restaurant using the slogan, “Today Fremont, tomorrow the world”. Prophetic words …

40. The Cowboys of the Big 12 Conf. : OSU
The athletic teams of Oklahoma State University are called the Cowboys, and the Cowgirls.

41. Disaster relief acronym : FEMA
Federal emergency management has been structured for over 200 years, but what we know today as the Federal Emergency Management Agency (FEMA) was created in 1979 in an Executive Order issued by President Jimmy Carter.

50. Minute bits : IOTAS
Iota is the ninth letter in the Greek alphabet. We use “iota” to portray something very small as it is the smallest of all Greek letters.

51. … of a 1964 Kennedy stamp : FIVE
President John F. Kennedy’s image appears on a 5-cent stamp that was first issued on May 29, 1964 on what would have been the president’s 47th birthday. A number of designs were produced for consideration for this stamp, and the final selection was made by the president’s widow, Jacqueline Kennedy.

52. Tel Aviv lander : EL AL
El Al (Hebrew for “to the skies”) does not fly on the Sabbath, although this has been subject of some controversy at times since the airline’s founding in 1948.

55. Tassel sporter : GRAD
Mortarboards, or square academic caps, are associated with school graduations all over the world, although traditions do differ. For example in Ireland (where I come from), mortarboards are only worn by female graduates.

57. Beano alternative : GAS-X
Gas-X is a trade name for the anti-foaming agent called simethicone. Simethicone causes small gas bubbles in the stomach to combine into larger bubbles that can then be “burped” more easily.

Beano is a dietary supplement that is used to reduce gas in the digestive tract. Beano contains an enzyme which breaks down complex sugars found in many vegetables. This makes the food more digestible and apparently cuts down on gas.

59. Suffix with Taiwan : -ESE
Prior to 1945, the island that we know today as Taiwan was called “Formosa”, the Portuguese word for “beautiful”. Portuguese sailors gave the island this name when they spotted it in 1544. The official name for the state of Taiwan is the “Republic of China”.

62. Actress ___ Ling of “The Crow” : BAI
Bai Ling is a Chinese actress who moved to the US in 1994. Apparently she claims she is from the moon, and her grandmother still lives there …