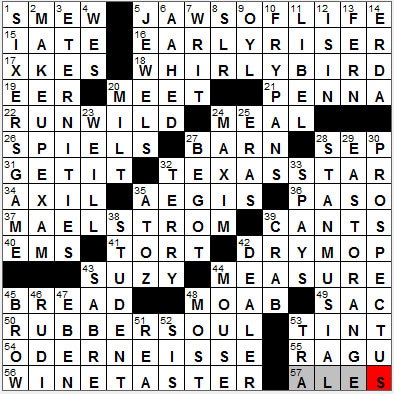 The goldeneye is a small, black and white seaduck. Before you ask, there’s no connection between the duck and Ian Fleming’s estate called Goldeneye, nor the James Bond book, nor the movie. I checked …

5. Emergency extractor : JAWS OF LIFE
Jaws of Life is a trademark, owned by Hurst Performance. Jaws of Life is a hydraulic tool used by rescue crews to extricate victims from automotive accidents. The tool is a relatively new invention, developed in 1963 for use after race car crashes.

17. Jags of the 1960s and ’70s : XKES
Jaguar started out as a manufacturer of sidecars for motorcycles back in 1922, when the company was known as the Swallow Sidecar Company (SS for short). The company changed its name to Jaguar after WWII, because of the unfortunate connotations of the letters “SS” in that era.

21. Only one of the 13 Colonies not touching the Atl. Ocean : PENNA
Today “Quaker State” is an unofficial name for Pennsylvania, as it is more correctly known as the Keystone State, and has been so since 1802. However in colonial times, Pennsylvania was known officially as the Quaker Province, recognizing the beliefs and doctrine of the state’s founder, William Penn.

26. They’re prepared to sell snake oil : SPIELS
A spiel is a lengthy speech or argument designed to persuade, perhaps a sales pitch. “Spiel” comes to us from German, either directly (“spiel” is the German for “play”) or via the Yiddish “shpil”.

There is actually a real snake oil, a traditional Chinese medicine made from fat extracted from snakes. You can buy snake oil at traditional Chinese pharmacies and it is supposed to be very efficacious in the treatment of joint pain. Snake oil was introduced into the US by Chinese laborers working on the construction of the Transcontinental Railroad. Medicine salesmen started to ridicule the snake oil as it competed with their own remedies, and in time the term “snake oil” became associated with any cure-all potion.

34. Angle in botany : AXIL
The axil is the upper angle between say a leaf stalk and the stem of a plant.

35. Support : AEGIS
Someone is said to be under the aegis of someone else when that other person provides protection or perhaps sponsorship.

36. El ___ : PASO
Although there have been human settlements in the El Paso area for thousands of years, the first European settlement was founded in 1659 by the Spanish. That first community was on the south bank of the Rio Grande, and was called El Paso del Norte (the North Pass). Most of the urban development under Spanish rule took place on the south side of the river, with El Paso del Norte acting as the center of governance for the Spanish for the territory of New Mexico. The Rio Grande was chosen as the border between Mexico and the US in 1848, so most of the city of El Paso del Norte became part of the Mexican state of Chihuahua (and is now called Cuidad Juarez). The area north of the river developed as a US military post, eventually becoming the modern city of El Paso, Texas.

41. Wrong : TORT
The word “tort” is a French word meaning “mischief, injury or wrong”. Tort law is generally about negligence, when the action of one party causes injury to another but that action falls outside of the scope of criminal law.

43. ESPN anchor Kolber : SUZY
Suzy Kolber is a sportscaster for ESPN, noted for her reports from the sidelines of football games.

45. Moolah : BREAD
No one seems to know where the term “moolah”  meaning “money” comes from, but it has been around since the 1920s.

48. Ancient neighbor of Judah : MOAB
In the Bible, Moab was the first son of Lot, and the founder of the Kingdom of Moab.

50. Follower of “Help!” : RUBBER SOUL
“Rubber Soul” is a Beatles album, the sixth one the band released. “Rubber Soul” was listed by “Rolling Stone” magazine as the fifth greatest album in music history.

54. ___ Line (international boundary) : ODER-NEISSE
The Oder-Neisse line is the border between Germany and Poland, a border that was established at the end of WWII. The border runs along the Oder and Lusatian Neisse rivers.

55. Alfredo sauce brand : RAGU
The Ragu brand of pasta sauce is owned by Unilever. The name ” Ragù” is the Italian word for a sauce used to dress pasta, however the spelling is off a little. In Italian the word is “Ragù” with a grave accent over the “u”, but if you look at a jar of the Unilever sauce, it is spelled “Ragú” on the label, with an acute accent. Sometimes I think we just don’t try …

5. The Pink Panther and others : JEWELS
A lot of people think that the Inspector Clouseau character (played originally by Peter Sellers) is “The Pink Panther”. It’s actually the jewel that was stolen in the original movie. Would you believe there 11 films in the whole series?

7. Certiorari, e.g. : WRIT
A writ of certiorari is an order by a superior court instructing a lower court to send the record in any particular case for review by the higher court.

8. Olympus OM-1, e.g. : SLR
SLR stands for “single lens reflex”. Usually cameras with changeable lenses are the SLR type. The main feature of an SLR is that a mirror reflects the image seen through the lens out through the viewfinder, so that the photographer sees exactly what the lens sees. The mirror moves out of the way as the picture is taken, and the image that comes through the lens falls onto unexposed film, or nowadays onto a digital sensor.

9. Olive ___ : OYL
“Thimble Theater” was the precursor comic strip to the famous “Popeye” drawn by E. C. Seger. Before Popeye came into the story, the brother and sister characters Castor Oyl and Olive Oyl were the main protagonists. And then, along comes a sailor …

13. Shedder of spores : FERN
Spores are produced by many bacteria, fungi and non-flowering plants. A spore is a reproductive body encased in a protective shell that is highly resistant to damage, and resistant to heat in particular.

14. Mother of the Valkyries : ERDA
In Richard Wagner’s (very, very lengthy) Ring Cycle, Erda is the goddess of the Earth (as well as wisdom and fate). The role of Erda is sung by a contralto.

20. Three-time All-Star pitcher Pappas : MILT
Milt Pappas is retired professional baseball pitcher. Pappas pitched for the Orioles, Reds, Braves and Cubs. Sadly, Pappas’ wife disappeared back in 1982, and four men were accused of her ritual killing. After five years the alleged victim’s body was found in a shallow pond. Apparently she had driven into the pond, perhaps under the influence, just a few blocks from her home.

23. “Mack the Knife” composer : WEILL
“The Threepenny Opera” (“Die Dreigroschenoper”) is a musical written by Bertolt Brecht and Kurt Weill that was first performed in Berlin in 1928, an adaptation of “The Beggar’s Opera” written by Englishman John Gay in the 18th century. The most famous song from the show is “Mack the Knife”, which was introduced into the popular music repertoire by Louis Armstrong. Armstrong had a hit with the song in 1956, but it was the Bobby Darin recording of 1959 that came to be known as the definitive, English-language version. I love that song …

24. Annual “Hot 100” publisher : MAXIM
“Maxim” is an international men’s magazine featuring revealing photo spreads (non-nude in the US) of female celebrities and models.

28. Cardinal for 22 years : STAN MUSIAL
Stan Musial is a retired baseball player who went by the nickname “Stan the Man”, a moniker he was awarded by the Brooklyn Dodgers fans in 1946. Apparently, off the field Stan is quite the harmonica player.

29. Newark suburb : EAST ORANGE
East Orange, New Jersey is a suburb of Newark. The list of famous former residents includes Whitney Houston (as a girl) and Janis Ian (also as a girl).

42. Crack investigator’s target? : DEALER
Crack cocaine is manufactured from powdered cocaine in a simple process. The powder is dissolved in an aqueous solution of baking soda, and the liquid is boiled off leaving a solid residue. The residue is broken up into chunks, and sold as crack. Apparently the crack is smoked, delivering an awful lot of cocaine into the body very quickly though the lungs. Sounds like nasty stuff …

43. Buffalo pro : SABRE
The Buffalo Sabres joined the NHL in the 1970-71 season. The team took the name “Sabres” following a fan contest.

46. Designer Gernreich : RUDI
Rudi Gernreich was fashion designer, born in Austria. Gernreich fled Austria due to Nazi influence, and ended up in Los Angeles. He is noted for design of the monokini, the first topless swimsuit.

51. “Still Crazy” star, 1998 : REA
Stephen Rea is an Irish actor, whose most famous role was that of the “retired” IRA man in the brilliant 1992 film “The Crying Game”. He also starred in the chilling movie “Stuck”, a 2007 film that is based on a true story about a woman who commits a hit and run on a homeless man. The woman leaves the scene of the crime with the victim still “stuck” in her windshield. The woman leaves the man to die in her garage. Chilling, eh? But as I said, a true story …