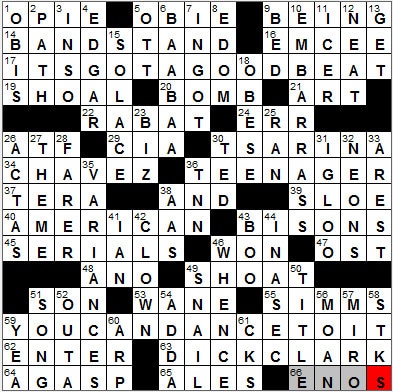 CROSSWORD SETTER: David J. Kahn
THEME: DICK CLARK … each of the theme answers refers to the late DICK CLARK, who passed away in April 2012 at the age of 82:


Today’s Wiki-est, Amazonian Googlies
1. TV sitcom boy who liked to fish : OPIE
Ron Howard sure has come a long way since playing Opie on “The Andy Griffith Show”. Howard has directed some fabulous movies, including favorites of mine like “Apollo 13”, “A Beautiful Mind” and “The Da Vinci Code”. And today, Opie is a grandfather …

5. Theater prize : OBIE
The Obies are the “Off-Broadway Theater Awards”. The Obies are presented annually, and the recipients are chosen by “The Village Voice” newspaper.

16. 63-Across, for one : EMCEE
“Emcee” come from “MC”, an abbreviation for the Master or Mistress of Ceremonies.

17. With 38- and 59-Across, typical opinion about a record on 40-/14-Across : IT’S GOT A GOOD BEAT
(38. See 17-Across : AND
59. See 17-Across : YOU CAN DANCE TO IT)
During the show “American Bandstand”, the host Dick Clark would often interview audience members asking their opinion of a record just played. Apparently a phrase oft associated with that segment of the show was “It’s got a good beat and you can dance to it”.

22. African capital : RABAT
Rabat is the capital city of the Kingdom of Morocco. After WWII, the United States maintained a major Air Force Base in Rabat, part of Strategic Air Command (SAC). Responding to pressure from the Moroccan government of King Mohammed V, the USAF pulled out in 1963.

29. Org. in Robert Ludlum novels : CIA
The Central Intelligence Agency (CIA) is the successor to the Office of Strategic Services (OSS) formed during WWII, and was chartered by the National Security Act of 1947.

“The Bourne Identity” is a great spy novel written by Robert Ludlum, and first published in 1980. It has been ranked as the second best spy novel of all time, just behind the even more enjoyable “The Spy Who Came in from the Cold” by John le Carre. Ludlum wrote two sequels, and all three parts of the Bourne Trilogy have been made into very successful movies, starring Matt Damon in the title role. Ludlum died before he could write more than three novels featuring Jason Bourne, but five more titles in the series have been published, written by Eric Van Lustbader. I must check them out …

30. Catherine I of Russia, e.g. : TSARINA
A Tsarina is the wife of a Tsar, or a Russian empress.

34. Labor leader Cesar : CHAVEZ
César Chávez was a Mexican American farm worker, and co-founder of the union today known as the United Farm Workers. Chávez was born in Yuma, Arizona, but moved to California as a child with his family. He never attended high school, dropping out to become a full-time migrant farm worker. In 1944, at 17 years of age, he joined the US Navy and served for two years. 5-6 years after returning from the military, back working as a farm laborer, Chávez became politically active and rose to national attention as an articulate union leader during some high profile strikes. He is remembered annually here in California on his birthday, March 31, which is a state holiday.

36. World’s Oldest ___ (nickname for 63-Across) : TEENAGER
Dick Clark was always noted for his youthful appearance, and given the fact that he spent so much time working with music much associated with the youth of the country, Clark was often referred to as “America’s Oldest Teenager”.

37. Prefix with flop : TERA-
The performance of a computer in carrying out scientific calculations is sometimes measured in “FLOPS”. FLOPS stands for “floating-point operations per second”.

39. Juicy fruit : SLOE
The sloe is the fruit of the blackthorn bush, and is the flavoring that gives gin its distinctive taste.

45. “Buck Rogers” and others : SERIALS
Before Buck Rogers made it into the big time in the comic strip “Buck Roger in the 25th Century”, he was a character in a pair of short stories written by Philip Francis Nowlan, the first of which was “Armageddon 2419 A.D.” In the stories, he was known as Anthony Rogers, and was given a name change when he went into the comics.

Cologne is the fourth largest city in Germany, and is called “Koln” in German.

49. Little squealer? : SHOAT
“Shoat” is a name given to a young hog, after it has been weaned.

55. Former Giants QB Phil : SIMMS
Phil Simms was an NFL quarterback and works as a broadcaster with CBS.

63. Late beloved TV personality : DICK CLARK
Television personality Dick Clark was best known for hosting “American Bandstand”, the longest-running TV variety show in the country’s history. Clark was also known as the host of the game show “Pyramid”, and of course as host of “Dick Clark’s New Year’s Rockin’ Eve” which was broadcast annually from Times Square in New York City. Despite suffering a massive stroke in 2004, and having a speech impairment as a result, Clark appeared on the “New Year’s Rockin’ Eve” show right up till the 2011/2012 episode. Clark passed away a few months later, in April 2012 at the age of 82.

66. Genesis figure : ENOS
Enos, as the son of Seth, was the grandson of Adam.

Down
1. Tokyo ties : OBIS
The sash worn as part of traditional Japanese dress is known as an obi. An obi can be tied in what is called a butterfly knot.

4. Award for mystery writers : EDGAR
The Edgar Allan Poe Awards (the Edgars) are presented annually by the Mystery Writers of America.

8. Biblical land whose name means “red” in Hebrew : EDOM
Edom is an ancient Iron Age kingdom located in the south of modern-day Jordan. The area is known for its red-colored sandstone, which gave the kingdom its name. The Hebrew word “Edom” translates as “red”.

27. With 51-Down, “14-Across Boogie,” on 40-/14-Across : THEME
(51. See 27-Down : SONG)
The original theme song for the hit show “American Bandstand” was Artie Shaw’s “High Society”. This was replaced early on in the show’s life with the famous theme called “Bandstand Boogie”. Barry Manilow wrote and recorded a rendition of “Bandstand Boogie” that was used from 1977 until the show was taken off the air in 1987.

30. ___ talks (annual idea conferences) : TED
The acronym TED stands for Technology Entertainment and Design. TED is a set of conferences held around the world by a non-profit group called the Sapling Foundation. The conference subjects are varied, and often led by big names, such as Bill Clinton, Al Gore, Bill Gates and Jane Goodall. The Sapling Foundation then makes the recordings of the conferences available for free online with the intent of disseminating the ideas globally. These conferences are known as “TED Talks”.

Nanook is a character from Inuit mythology, the master of the bears. The name “Nanook” came into the general consciousness of the public with the release of the silent documentary film “Nanook of the North” in 1922.

32. Las Vegas signs : NEONS
The basic design of neon lighting was first demonstrated at the Paris Motor Show in 1910. Such lighting is made up of glass tubes containing a vacuum into which has been introduced a small amount of neon gas. When a voltage is applied between two electrodes inside the tube the neon gas “glows”, giving off the familiar light.

36. C&W channel, once : TNN
The Nashville Network (TNN) was a country music cable channel that operated from 1983 to 2003. When TNN closed down it was relaunched with a completely different format as Spike, marketed as “the first television channel for men”.

41. Actor McShane : IAN
Ian McShane is an English actor, famous in his homeland (and to PBS viewers in the US) for playing the title role in “Lovejoy”. In this country he is perhaps better known for playing the conniving saloon owner on the HBO western drama “Deadwood”.

49. ___ mail : SNAIL
“Snail mail” is regular mail delivered by the postal service. The term “snail mail” arose as email gained in popularity, and is a reference to the difference in speed between email and paper mail.

57. A Barcelona museum is dedicated to his work : MIRO
Joan Miro was a Spanish artist. Miro immersed himself in Surrealism, so much so that Andre Breton, the founder of the movement, said that Miro was “the most Surrealist of us all”.

60. Dada pioneer : ARP
Hans Arp was a French artist renowned for his work with torn and pasted paper, although that wasn’t the only medium he used. Arp was the son of a French mother and German father and spoke both languages fluently. When he was speaking German, he gave his name as Hans Arp, but when speaking French he called himself Jean Arp. Both “Hans” and “Jean” translate into English as “John”. In WWI Arp moved to Switzerland to avoid being called up to fight, taking advantage of Swiss neutrality. Eventually he was told to report to the German Consulate and fill out paperwork for the draft. In order to get out of fighting, Arp messed up the paperwork by writing in the date in every blank space on the forms. Then he took off all his clothes and walked with his papers over to the officials in charge. He was sent home …

Dadaism thrived during and just after WWI, and was an anti-war, anti-bourgeois and anti-art culture. The movement began in Zurich, Switzerland, started by a group of artists and writers who met to discuss art and put on performances in the Cabaret Voltaire, frequently expressing disgust at the war that was raging across Europe.