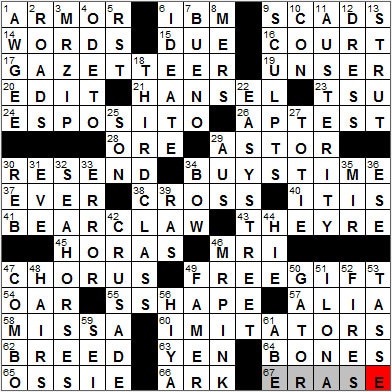 CROSSWORD SETTER: Paula Gamache
THEME: CROSS First … all of the theme answers start with word CROSS, but that part of the answer is missing and has to be assumed:


Today’s Wiki-est, Amazonian Googlies
1. Pieces of mail : ARMOR
Mail is a type of armor that was worn as far back as 300 BCE. Mail is basically a mesh made of metal rings that are linked together and fashioned into a protective garment.

6. Watson’s creator : IBM
Watson is a program still in development at IBM. It is designed to answer questions that are posed in natural language, so that it should be able to interpret questions just as you and I would, no matter how the question is phrased. The program is named after the founder of IBM, Thomas J, Watson. Watson competed in a few memorable episodes of “Jeopardy!” in 2011 taking out two of the best players of the quiz show. It made for fun television.

17. Atlas go-with : GAZETTEER
A gazetteer is a geographic dictionary. Back in the early 1600s, a gazetteer was a journalist. Around 1700, a geographical handbook for journalists was issued called “The Gazetteer’s, or Newsman’s, Interpreter”, which eventually became simply “The Gazetteer”, giving us our usage today.

19. Legendary racing name : UNSER
The Unser family seems to have racing cars in its blood. Al Unser, Sr. won the Indy 500 on four occasions. Al’s brother Jerry was the first of the Unsers to compete at Indianapolis. Al’s other brother Bobby, won the Indy three times. Al’s son, Al Junior, won the Indy twice. Al Junior’s son is also a racing driver who competes at the Indy Speedway.

21. Grimm boy : HANSEL
“Hansel and Gretel” is a Germanic fairy tale found in the collection of the Brothers Grimm. It tells of two siblings, Hansel and Gretel, the children of a woodcutter. The youngsters are abandoned in a forest at the behest of an evil stepmother. Clever Hansel hears of the plan and leaves a trail of pebbles so that he and his sister can find their way home, which they do. But the children are abandoned again, and this time leave a trail of breadcrumbs. Unfortunately, the crumbs are eaten by birds and so the children do indeed become lost. But eventually they do all live happily ever after …

29. John Jacob ___ : ASTOR
John Jacob Astor was the father of the famous American Astor dynasty. He was the country’s first multi-millionaire, making his fortune in the trade of fur, real estate and opium. In today’s terms, it has been calculated that by the time of his death he has accumulated a fortune big enough to make him the fourth wealthiest man in American history (in the company of the likes of Andrew Carnegie, Cornelius Vanderbilt, Bill Gates, Henry Ford and John D. Rockefeller).

40. Suffix with senior : -ITIS
Senioritis is the colloquial name given to the tendency of some senior students to lose motivation to study as they head towards the end of high school and college careers.

45. Jewish wedding rings? : HORAS
The hora (also horah) is a circle dance that originated in the Balkans. The hora was brought to Israel by Romanian settlers, and is often performed to traditional Israeli folk songs. The dance  is a regular sight at Jewish weddings.

46. Radiologist’s tool, briefly : MRI
A CT (or “CAT”) scan produces (via computer manipulation) a three dimensional image of the inside of an object, usually the human body. It does so by taking a series of two dimensional x-ray images while rotating the camera around the patient. The issue with CT scans is that they use x-rays, and high doses of radiation can be harmful causing damage that is cumulative over time. An MRI on the other hand (Magnetic Resonance Imaging), uses powerful magnetic fields to generate its images so there is no exposure to ionizing radiation (such as X-rays). We used MRI equipment in our chemistry labs at school, way back in the days when the technology was still called Nuclear Magnetic Resonance Imaging (NMRI). Apparently the marketing folks didn’t like the term “nuclear” because of its association with atomic bombs, so now it’s just called MRI.

62. *Labradoodle, e.g. : (CROSS)BREED
A Labradoodle is a cross between a Labrador Retriever and a Poodle.

63. Capital of Japan : YEN
The three currencies, the Korean Won, the Chinese Yuan, and the Japanese Yen, all take their names from the Chinese written character that represents “round shape”.

65. Davis of Hollywood : OSSIE
Ossie Davis was a very successful African-American actor, but also a director, poet, playwright and social activist. In the CBS sitcom “Evening Shade”, he was the narrator.

Down
3. Bygone U.S. Postal Service mascot : MR ZIP
Mr ZIP is a mascot that was used by the US Post Office in the sixties and seventies. Mr ZIP’s mission was to encourage the public to use ZIP codes when mailing letters and packages.

4. Keats’s “___ Psyche” : ODE TO
The poet John Keats is famous for writing a whole series of beautiful odes. The most renowned are the so-called “1819 Odes”, a collection from the year 1819 that includes famous poems such as “Ode on a Grecian Urn”, “Ode to a Nightingale” and “Ode to Psyche”.

7. Good, to Guillermo : BUENO
Guillermo is Spanish for William.

8. Cousteau’s milieux : MERS
Jacques-Yves Cousteau started off his career in the French Navy, aiming for a working life in aviation. Because of a car accident, he had to abandon his first career choice and instead went to sea. Famously, he invented the Self Contained Underwater Breathing Apparatus (SCUBA), also called the aqualung.

22. Life of Riley : EASY STREET
The phrase “life of Reilly” dates back to at least 1919. It may have originates in a song from the 1880s about a man called O’Reilly and how he became rich and lived an easy life.

27. Fields of comedy : TOTIE
Totie Fields was the stage name of comedian Sophie Feldman. “Totie” is a corruption of “Sophie” and was what she was called as a child.

31. Garden evictee : EVE
According to the Book of Genesis, Adam and Eve lived in a garden “in” Eden, with Eden being geographically located by reference to four rivers, including the Tigris and the Euphrates. Some scholars hypothesize that Eden was located in Mesopotamia, which encompasses much of modern-day Iraq.

34. *Weapon for William Tell : (CROSS)BOW
Supposedly William Tell came from Uri, a canton in the German part of Switzerland. Altdorf is the capital of Uri and is the city where William Tell shot the apple off his son’s head, according to legend.

35. Novy ___ (Russian literary magazine) : MIR
“Novy Mir” is a Russian literary magazine with a long and varied history dating back to 1925. At one time, the magazine’s content was heavily influenced by the Soviet Communist Party, but there were also times when it became an outlet for dissidents. Famously it published “One Day in the Life of Ivan Denisovich”, a novella by Alexander Solzhenitsyn telling the story of a prisoner in the Gulag.

46. Steve Buscemi’s role in “Reservoir Dogs” : MR PINK
“Reservoir Dogs” was the first film directed by Quentin Tarantino, and was released in 1992. I really don’t like Tarantino movies as I just cannot take all the violence. I checked the cast listing for “Reservoir Dogs” and it is a “men only” production. There are no named characters in the film played by women. All I can see is Linda Kaye who played “Shocked Woman”, and Suzanne Celeste who played “Shot Woman” …

The talented actor Steve Buscemi has played many notable roles, particularly in the films by the Coen brothers like “The Big Lebowski”, “Paris, je t’aime”, and my personal favorite “Fargo”. Bescemi was a New York City fire fighter for four years in the city’s Little Italy district. After the World Trade Center tragedy Buscemi volunteered at his old firehouse and worked 12-hour shifts for a week digging through rubble.

51. Actress Massey : ILONA
Ilona Massey was a Hollywood actress, a native of Budapest in Hungary. Given her cultural background and the period at which she hit the big screen, Massey was marketed by the studios as “the new Dietrich”.

52. *Bygone Chryslers : (CROSS)FIRES
The Chrysler Crossfire is sports car that was produced from 2003 to 2007. The Crossfire was built in German by Karmann.

Cannes is a city on the French Riviera, noted as host of the Cannes Film Festival. The idea of the annual film festival was adopted by the city just before WWII. The festival had to wait for the end of the war for its launch, until 1946.

59. Six, in Sicilia : SEI
Sicily is the largest island in the Mediterranean Sea, the “ball” that is being kicked by the Italian “boot”.

61. Former justice Fortas : ABE
Abe Fortas was a US Supreme Court Justice from 1965 to 1969. Fortas has to resign his position on the bench due to a scandal about payments received, allegedly for favors.