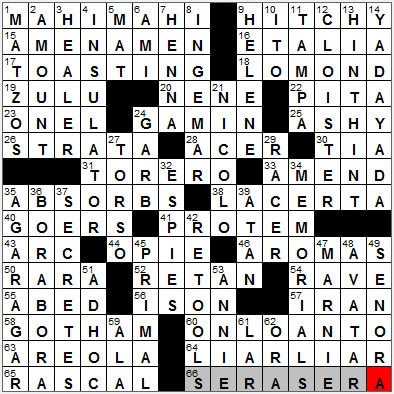 CROSSWORD SETTER: Kevin Adamick
THEME: Repetitive Answers … each of the themed answers is a term made up two identical words:


Today’s Wiki-est, Amazonian Googlies
1. Hawaiian entree : MAHI-MAHI
Mahi-mahi is the Hawaiian name for the dolphin-fish, an ugly looking creature if ever I saw one …

15. Emphatic call from the flock : AMEN AMEN
The word “amen” is translated as “so be it”. “Amen” is said to be of Hebrew origin, but it is likely to be also influenced by Aramaic and Arabic.

19. Natal native : ZULU
The Zulu are the largest ethnic group in South Africa, with an estimated population of 10-11 million people today. The Zulu were famous for resisting the colonization by the British in the 19th century, resulting in the Anglo-Zulu War. The Zulus had initial success, but the British eventually prevailed (see the excellent film “Zulu”, starring Michael Caine and others, from 1964).

Natal was a province of South Africa up to 1994. The name “Natal” means Christmas in Portuguese, a name given to the region by the explorer Vasco da Gama as he sailed by on Christmas Day in 1497.

20. 50th state’s bird : NENE
The bird called a nene is a native of Hawaii, and is also known as the Hawaiian goose. The name “nene” is imitative of its call. When Captain Cook landed on the islands in 1778, there were 25,000 nene living there. By 1950, the number was reduced by hunting to just 30 birds. Conservation efforts in recent years have been somewhat successful.

22. Kind of sandwich : PITA
Pita is a lovely bread in Middle-Eastern and Mediterranean cuisines. It is usually round, and has a “pocket” in the center. The pocket is created by steam that puffs up the dough during cooking leaving a void when the bread cools. The pockets were a big hit in the seventies when someone came up with the idea of using them for fillings hence creating pita sandwiches or “pita pockets”.

Juris Doctor is a professional doctorate in the field of law, and is abbreviated to JD.

24. Street child : GAMIN
“Gamin” is a French word that we’ve imported into English. In both languages it means “street urchin”.

25. Like the area around an erupting volcano : ASHY
Our word “volcano” comes from “Vulcano”, the name of a volcanic island off the coast of Italy. The island’s name comes from Vulcan, the Roman god of fire. The Romans believed that the island of Vulcano was the chimney of the forge belonging to the god Vulcan. The Romans also believed that the eruptions on Mount Etna in Sicily were caused by Vulcan getting angry and working his forge so hard that sparks and smoke flew out of the top of the volcano.

31. One concerned about charges : TORERO
“Toreador” is an old Spanish word for a bullfighter, but it’s a term not used any more in Spain nor in Latin America. In English we use the term “toreador”, but in Spanish a bullfighter is a “torero”.

38. The Lizard constellation : LACERTA
Lacerta is a faint constellation, quite hard to make out apparently. “Lacerta” is Latin for “lizard”.

41. President ___ : PRO TEM
Pro tempore can be abbreviated to “pro tem” or “p.t.” It is a Latin phrase which best translates as “for the time being”. It is used to describe a person who is acting for another, usually a superior.

44. Redheaded boy of 1960s TV : OPIE
Ron Howard sure has come a long way since playing Opie on “The Andy Griffith Show”. Howard has directed some fabulous movies, including favorites of mine like “Apollo 13”, “A Beautiful Mind” and “The Da Vinci Code”. And today, Opie is a grandfather …

54. All-night party : RAVE
As you might imagine, I’ve never been to a rave, and don’t have one upcoming in my diary. And if they start at 2 a.m. then I’m unlikely ever to experience one. A rave is generally an all-night party featuring loud, electronically synthesized music usually played by a DJ, as opposed to a live band.

57. Modern home of ancient Elam : IRAN
The ancient civilization of Elam was located east of Mesopotamia, in what is modern-day southwest Iran.

58. Batman’s home : GOTHAM
Gotham has been a nickname for New York City long before it was picked up by comic books as a setting for Batman tales. The term was coined by Washington Irving in a periodical that he published in 1807. He was lampooning New York politics and culture, and lifted the name from the village of Gotham in Nottinghamshire, England. The original Gotham was, according to folklore, inhabited by fools.

Batman is unique among his superhero compatriots in that he has no special powers, just a whole load of cool gadgets.

64. 1997 Carrey comedy : LIAR LIAR
The full rhyme used by children to deride someone not telling the truth is:

65. Spanky or Alfalfa : RASCAL
Hal Roach made a whole series of comedy shorts with “The Little Rascals”, also known as “Our Gang”. This very likable bunch of kids included Spanky, and his kid brother, Porky. Porky had a speech impediment, so he couldn’t pronounce “Okay, Spanky” very clearly and it came out as “Otay, Panky”.

Alfalfa’s real name was Carl Switzer. He and his brother were quite the young performers around his hometown in Illinois, singing and playing instruments. On a trip to California, the Switzer family were touring the Hal Roach movie studio and were fooling around in the studio cafeteria, basically giving an impromptu performance. Hal Roach happened to be there at the time, and signed both brothers up for roles in “Our Gang”. Carl was to play “Alfalfa”, and brother Harold played “Slim” (aka “Deadpan”).

Down
1. Seder servings : MATZOS
The Passover Seder is a ritual feast that marks the beginning of the Jewish Passover holiday, celebrating the liberation of the Israelites from slavery in Egypt. One of the traditions at the meal is that the youngest child at the table asks “The Four Questions”, all relating to why this night is different from all other nights in the year:

4. Asbestos, for one : INSULATOR
Asbestos was very, very popular in so many applications for many years. The world’s largest asbestos mine was in Quebec, Canada in the town of … Asbestos.

5. Dojo floor covering : MAT
The Japanese word dojo literally means “place of the way”. Originally the term applied to training halls that were found in or beside temples. The teaching in a dojo was not limited to the martial arts, but in the Western world we use the dojo as the name for a training facility for judo, karate and the like.

7. Skin colorer : HENNA
Henna has been used for centuries as a dye, not just for leather and wool, but also for the hair and skin. In modern days, henna is used for temporary tattoos.

9. ___ Curtis, onetime cosmetics giant : HELENE
Helene Curtis Industries was based in Chicago, and was taken over by Unilever in 1996. Helene Curtis was the first company to use the term “hairspray”, when it introduced aerosol products in 1950.

11. Home of MacDill Air Force Base : TAMPA
Tampa has been known as the Big Guava since the seventies. The term is imitative of New York’s “Big Apple”, and refers to the unsuccessful search for the reported wild guava trees that were once hoped to be the basis of a new industry for the area.

McDill Air Force Base is located just a few miles from downtown Tampa, Florida. One of the main missions of the base is to provide an efficient air-refueling capability right across the globe.

12. Part of many a convent : CLOISTER
Cloisters are usually such beautifully peaceful areas. They are found as part of religious buildings in particular. Cloisters are rectangular open spaces surrounded by covered walkways that are attached to other structures.

21. Violinmaker Amati : NICOLO
The first of the Amati family to make violins was Andrea Amati, who lived in the 14th century. He was succeeded by his sons, Antonio and Girolama. In turn, they were succeeded by Girolama’s son, Nicolo. Nicolo had a few students who achieved fame making musical instruments as well. One was his own son, Girolamo, and another, the famed Antonio Stradivari.

27. Many a classical sculpture : TORSO
“Torso” is an Italian word meaning the “trunk of a statue”, which we imported into English.

35. Petri dish gel : AGAR AGAR
Agar is a jelly extracted from seaweed that has many uses. It is found in Japanese desserts, and can also be used as a food thickener or even as a laxative. In the world of science it is the most common medium used for growing bacteria in Petri dishes.

36. South Pacific island : BORA BORA
Bora Bora is one of the Society Islands of French Polynesia. The name Bora Bora is imitative of the Tahitian name for the island and should really be pronounced “pora pora”. It means “first born”.

47. 1964 Hitchcock thriller : MARNIE
Marnie is a good example of the Hitchcock genre of psychological thrillers, although it wasn’t as well received as so many of Hitchcock’s works. Released in 1964, it stars Tippi Hedren (who also starred in Hitchcock’s “The Birds”) and Sean Connery of James Bond fame.

48. 2009 James Cameron blockbuster : AVATAR
I went to the 3D version of “Avatar” when I saw it for the first time. It really is the only way to see that movie …

51. Like some committees : AD HOC
The Latin phrase “ad hoc” means “for this purpose”.

53. Musical with the song “N.Y.C.” : ANNIE
The musical “Annie” is based on the Harold Gray comic strip “Little Orphan Annie”. There were two subsequent film adaptations, both really quite successful, including one released in 1982 directed by John Huston of all people. “Annie” was Huston’s only ever musical.

62. ___ pro nobis : ORA
“Ora pro nobis” translates from Latin as “pray for us”. It is a common term used in the Roman Catholic tradition and is often shortened to “OPN”.