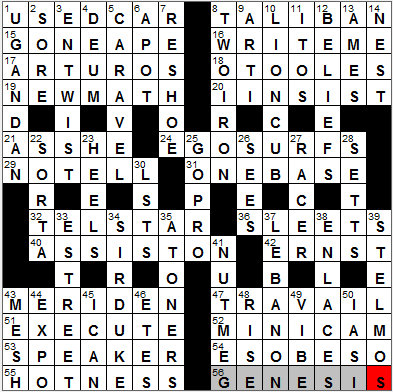 CROSSWORD SETTER: Joe Krozel
THEME: A Spell Singing … If you’re doing the puzzle online, three clues in the puzzle are in two parts, with the second part referring to words spelled out individually in following lines. And each of those answers is a word that is spelled out in a popular song. If you’re doing a print version of the puzzle then the same principle applies, but the clue numbering is a lot more straightforward:


NB: I do the puzzle online, and the clue numbers are a little different today from the version in the newspaper!

8. Afghan power : TALIBAN
“Taliban” is a Pashto word meaning “students”. The Taliban is a relatively young organization, only formed in 1991. It was started by Mullah Omar in his hometown of Kandahar in the south of Afghanistan.

17. Jazz trumpeter Sandoval and others : ARTUROS
Arturo Sandoval is a jazz trumpeter, pianist and composer from Cuba. Sandoval left Cuba to tour with Dizzy Gillespie in the eighties and, while in Spain, defected to the US. He now lives in California. There was a TV movie made in 2000 that tells Sandoval’s life story, with Andy Garcia playing the lead.

18. Peter and Annette of film : O’TOOLES
Irish actor Peter O’Toole got his big break in movies when he played the title role in the 1962 epic film “Laurence of Arabia”. But my favorite of his movies is much lighter fare, “How to Steal a Million” in which he stars opposite Audrey Hepburn.

Annette O’Toole is the actress who plays Clark Kent’s mother on the TV show “Smallville”.

19. 1960s teaching focus : NEW MATH
“New Math” was a novel method of teaching mathematics that became popular with the powers that be (not so much with students and teachers!) in the sixties. Central to New Math was set theory. The impetus for introducing the new methodology was the Space Race, as there was fear in the US that the country was not generating enough science-oriented mathematicians to compete with Soviet engineers and physicists.

24. Looks for oneself, in a way : EGO SURFS
We’ve all done it, googling our own names to see what comes up. It’s called “ego surfing”.

(next line) It’s spelled out in an Aretha Franklin hit : R-E-S-P-E-C-T
“Respect” is a song by Otis Redding, and one that he recorded himself in 1965. It became a hit when Aretha Franklin made her famous cover version in 1967. Having said that, the Redding and Franklin versions do have different storylines and musical “feels”.

I think Aretha Franklin, the Queen of Soul, had a tough life. She had her first son when she was 13-years-old, and her second at 15. In 2008, “Rolling Stone” magazine ranked her as number one in their list of the greatest singers of all time.

32. First satellite to transmit a phone call through space, 1962 : TELSTAR
Telstar 1 was a communications satellite launched by AT&T in 1962. Telstar 1 acted as a relay for the first phone calls to be sent through space, as well as the first television pictures. Telstar 1 didn’t stay in service very long though. The transistors on board were fried when the US exploded a high-altitude nuclear bomb in a test later that year.

42. Young partner : ERNST
Ernst & Young is one of the Big Four accountancy firms, alongside Deloitte, KPMG and PricewaterhouseCoopers. Ernst & Young is headquartered in London.

43. Connecticut city on the Quinnipiac River : MERIDEN
The city of Meriden, Connecticut is named for the English town of Meriden in the West Midlands.

54. Paul Anka hit with a rhyming title : ESO BESO
“Eso Beso” is Spanish for “That Kiss”, and was the name of a hit for Canadian-born singer Paul Anka.

Canadian-born Paul Anka’s big hit was in 1957, the song titled “Diana”. He was the subject of a much-lauded documentary film in 1962, called “Lonely Boy”.

55. Salsa quality : HOTNESS
“Salsa” is simply the Spanish for “sauce”.

Down
1. Like part of Lake Victoria : UGANDAN
Uganda is a landlocked county in East Africa lying just to the west of Kenya. Uganda was ruled by the British as a protectorate from 1894 and gained independence in 1962. Uganda is very much associated with the tyrannical rule of Idi Amin in the 1970s.

Lake Victoria is the largest area lake on the continent of Africa. It was named by English explorer John Hanning Speke in honor of Queen Victoria of the UK. Speke was the first European to set eyes on the lake.

5. Niña or Pinta : CARAVEL
A caravel was a Portuguese ship that was small and very maneuverable. Caravels had triangular lateen-rigged sails which allowed them to sail quite close to the wind. Caravels were indeed quite small, only accommodating a crew of twenty or so sailors.

As we all know, Christopher Columbus used three ships in his first voyage across the Atlantic: the Santa Maria, the Niña and the Pinta. The Pinta was the fastest of the three, and it was from the Pinta that the New World was first spotted, by a sailor on lookout called Rodrigo de Triana. Pinta was a nickname (as was Niña), meaning “the painted one”. The Pinta’s real name has been lost in mists of time.

The ship we know as the Niña was actually the nickname of a ship actually called the Santa Clara. The nickname “Niña” probably came from the name of her owner, Juan Niña of Moguer.

7. Do some farrier’s work on : RESHOE
Our word “farrier”, a blacksmith, comes to us via French from the Latin “ferrarius” meaning “of iron”. That makes sense …

8. Club not seen much nowadays : TWO IRON
Apparently the 2 iron has been dropped from a golfer’s arsenal in favour of an extra wedge.

11. Midori and Lance : ITOS
Midori Ito is a Japanese figure skater. She was the first woman to land a triple/triple jump and a triple axel in competition. In fact, she landed her first triple jump in training, when she was only 8 years old …

Judge Lance Ito came in for a lot of criticism for his handling of the O.J. Simpson murder trial. The lead prosecutor in that trial was Marcia Clark, you might recall. I read her book “Without a Doubt” a few years ago, and she pointed out one trait of Judge Ito that I think is quite telling. Ito would almost always refer to the prosecutor as “Marcia”, while addressing the men on both sides of the case as “Mister”.

13. ___ Straw Poll : AMES
The city of Ames Iowa is famous for holding the Ames Straw Poll in advance of most presidential elections. The poll in question is used to gauge the level of support for two or more Republican candidates, although non-Republicans are allowed to cast a vote. To vote one has to be an Iowa resident and one must buy a ticket to the fundraising dinner at which the vote is taken. The event gets a lot of coverage, so it boosts the local economy as journalists hit the town. It is a very successful fundraiser for the Republican Party in Iowa as well, but the usefulness of the straw poll in predicting the eventual winner of the nomination is less clear. There have been five straw polls since 1979, and just 2 out of 5 times the poll winner went on to capture the party’s nomination.

27. Hot Wheels product : RACER
The Hot Wheels brand of toy car was introduced by Mattel in 1968.

28. Small paving stones : SETTS
A sett is a small rectangular paving stone with a rounded top used to make a road surface. It’s like a cobblestone, I think …

30. Military transports: Abbr. : LSTS
LST stands for Landing Ship, Tank. LSTs were the large vessels used mainly in WWII that had doors at either ends through which tanks and other vehicles could roll off and onto beaches. The design concept persists to this day in the huge fleet of commercial roll-on/roll-off car ferries, all inspired by the LST.

37. Asian land where French is widely spoken : LEBANON
Beirut is the capital city of Lebanon. After WWI, Lebanon was placed under administrative control of the French and Beirut flourished as a financial center in the Middle East and a major world tourist destination. The city was devastated in the Lebanese Civil War that raged from 1975 to 1990, but reconstruction has restored the city to much of its former glory, making it a major cultural center once again.

39. Fire starter? : ST ELMO’S
St. Elmo is the patron saint of sailors. He lends his name to the electrostatic weather phenomenon (often seen at sea) known as St. Elmo’s fire. The “fire” is actually a plasma discharge caused by air ionizing at the end of a pointed object (like the mast of a ship), often observed during electrical storms.

41. Nog flavorer : NUTMEG
The fruit of the nutmeg tree yields two very different spices. What we call “nutmeg” comes from the seed of the tree. “Mace” is the dried covering of the seed.

It’s not really clear where the term nog comes from although it might derive from the word “noggin”, which was originally a small wooden cup long associated with alcoholic drinks.

46. Nantes seasons : ETES
One might spend the summer (été) in Nantes in France.

Nantes is a beautiful city located on the delta of the Loire, Erdre and Sevre rivers. It has the well deserved nickname of “The Venice of the West”. I had the privilege of visiting Nantes a couple of times on business, and I can attest that it really is a charming spot.

50. Former capital of Romania : IASI
Iasi is a large city located in the Moldavia region of Romania. Iasi briefly served as capital of the besieged country of Romania during WWII, from 1916 to 1918.


NB: I do the puzzle online, and the clue numbers are a little different today from the version in the newspaper!